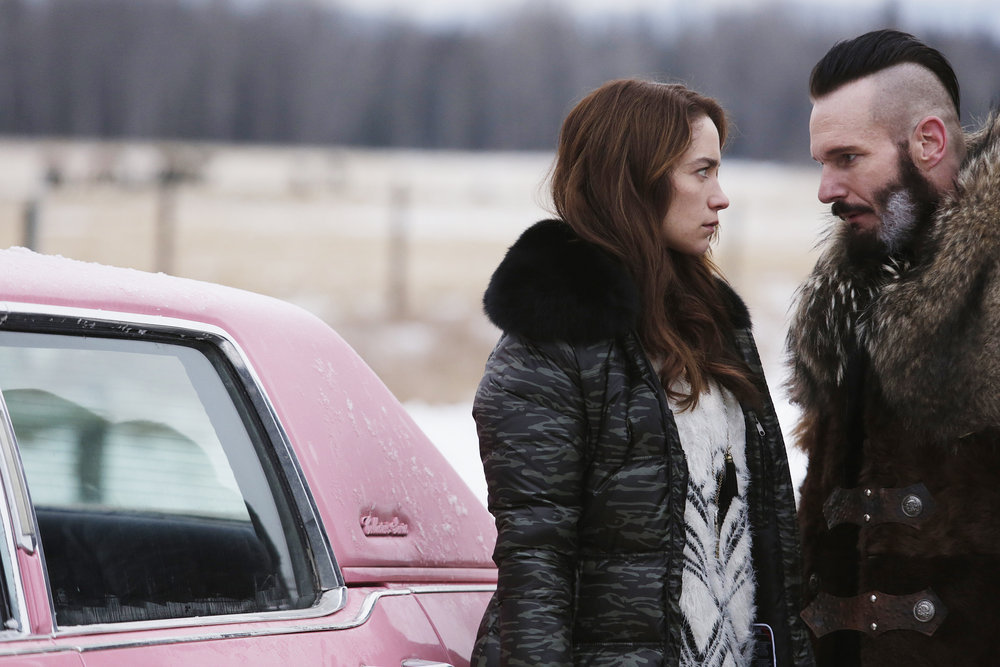 Here is a continuation of my interviews with the men of the hit Syfy show ‘Wynonna Earp’ and some teases for the upcoming episode called “Bury Me with My Guns On,” airing this Friday, May 27th.  Part I can be found here.  For those of you who may have missed Bobo (Michael Eklund) last week, he makes an appearance, as does Ms. Clootie (Rayisa Kondracki).  I still don’t forgive her for killing the Blacksmith (Rachael Ancheril).  Wynonna, still reeling from her confrontation with Jack of Knives, tries to help Doc, but is she able to? Also I think the Waverly (Dominique Provost-Chalkley) and Officer Haught (Katherine Barrell) shippers will be happy with their scenes this Friday! 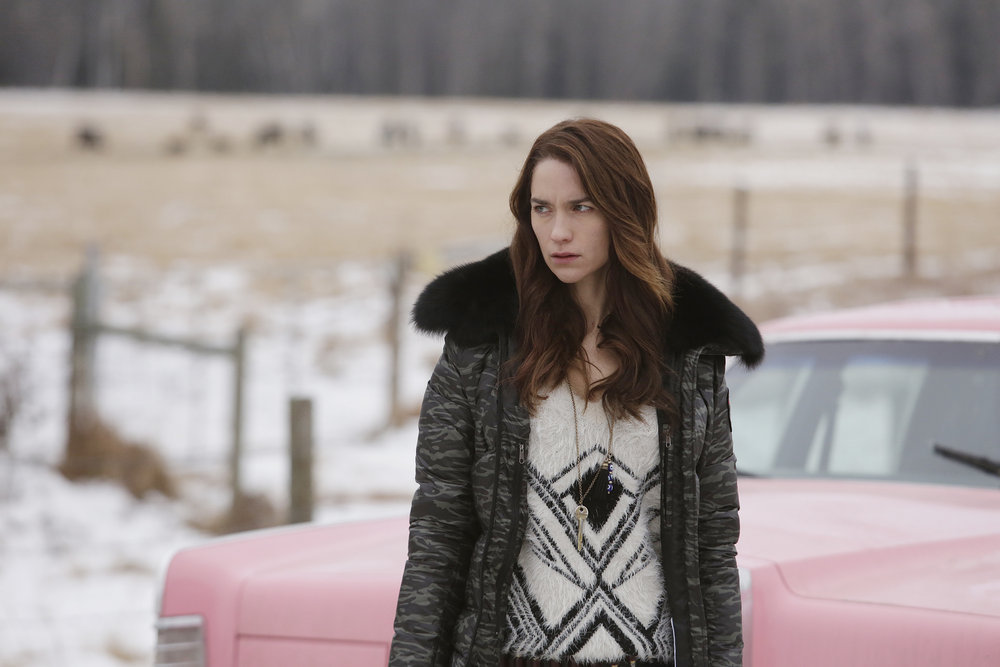 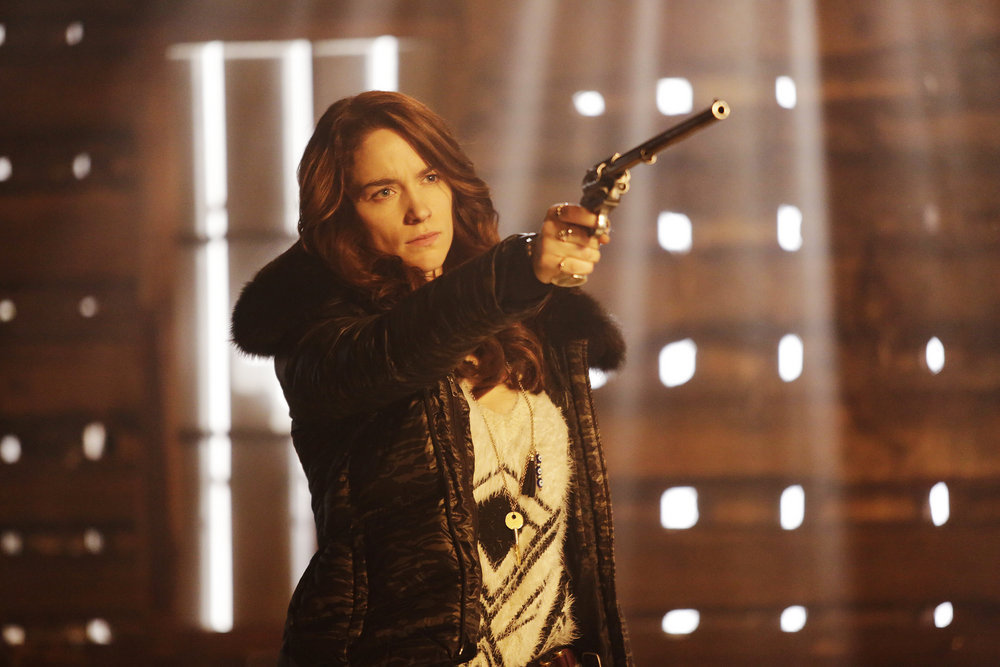 I wanted to get more insight into Bobo as a character, and from what we learn during this week’s episode, I say that Ecklund’s teases were warranted.  I enjoyed talking with Eklund as he really enjoys playing Bobo.

Michael Eklund:             That’s all unfolding as the season airs. So I can’t give away why Bobo was Waverly’s secret friend when she was a child but I will say that you will find out in the end.

Michael Eklund:             Yeah, yeah. It definitely gets explained and the storyline does go into the detail of the relationship he has with Waverly and the Earp family.

Michael Eklund:             Yes. They do have a connection; I will say that. And Bobo knows more about Waverly than – and the whole Earp family – than they realize.

(I’m wondering now if this is related to what Jack told Wynonna about her dad in last week’s episode?)

Michael Eklund:             How Bobo became a Revenant?  Yeah, that would be wayyyy back…. It gets discussed. You won’t see it but it will be discussed and explained who Bobo is, what his connection is with the history of the past. And basically the whole Bobo character is unfolding right now. It’s just basically, I would say, getting started. If everybody thought it was already getting started, It’s in second gear right now and there’s a third and fourth gear to come.

Michael Eklund:             The complexity of the role, the mysteriousness of what is and who is Bobo Del Rey. I’ve always said before, right when you think what’s going on with the character, it flips on you and it’s not what you think. There’s much more to it than the information and the clue that has been unveiled already in the episodes that have aired. And so that was the part that I loved the most is what is Bobo’s motivation of why he’s doing what he’s doing and just the psychological process of the character of Bobo Del Rey. Because he’s not your typical normal TV bad guy/villain.

He’s much more complex than that. And so the complexity of the character I think is what attracted me most. He isn’t just a surface level bad guy. He does have his own desires, thoughts and wants and feelings, his own dreams and passions and stuff like that, just like the typical good guy characters. Emily created the show, created a fully flushed out character as Bobo Del Rey. When I read the character and Emily explained to me where the character was going, that’s what got me most excited.

Michael Eklund:             It’s a fun show. It’s a fun, roller coaster ride of a show and we’re always dropping clues of what’s happening next. If you pay attention closely, it’s all in the details, too. Like I said before, we’re halfway through the season airing; there’s another half to go. And the second half, I think we even take it up a notch even more and it’s going to get really fun soon.

Michael Eklund:             Any character? One of my lines that pops out is Dominique’s line, Waverly, where she says, “There’s Wynonna being all Wynonna again.”

Michael Eklund:             The way she delivers that line, she hit it perfectly. That line jumps out in my mind. And then every time Doc Holliday ,(Tim), says the name “Bobo Del Rey,” he just has a way of saying it.

Michael Eklund:             Man, you know Bobo has a lot of good lines. But one of mine that just aired the other day, I think it was the last episode, is when I get in a conversation with Doc. And I just put my arm around his neck and I just tell him that I’m bored. It’s a simple line but it carries so much weight, you know? Bobo just says to Doc, “I’m bored,” and tosses him away like he’s nothing. And that is Bobo. You know, he’s been around for a long, long time and he’s bored and he’s looking for some excitement…. you know, all my scenes are very –

Michael Eklund:             Yeah, sarcastic and just – you know, Bobo Del Rey does have a master plan that we’re all going to see what it is very soon. And he’s been working on it for 15 years, so…(Guys after watching episode 9, this is a hint!)

Michael Eklund:             I do. It hasn’t aired yet. It’s in the back half; the last four or five episodes. It really heats up for the Bobo Del Rey character. So they haven’t been aired yet but some of my favorite episodes are still to come. I would say episode ten and 13. But right now, the ones that have aired, I really love the episode when the Doc Holliday character and Bobo were in the interrogation room.

Michael Eklund:             Where Bobo has been arrested and I have the scene with Waverly. And then Wynonna comes in and Bobo reveals that he does have this kind of telekinesis power and he holds the peacemaker that other Revenants can’t hold but Bobo Del Rey can. So that whole episode really stood out for me of the ones that have actually aired.

Eklund was dropping hints like a big dog! It was great talking with him though! Even though most of my interview with Tim last week focused on Doc’s team-up with Agent Dolls, after watching episode 9, I found that Tim indirectly teases what’s to come regarding his vendetta against baddie Ms. Clootie.

Tim Rozon:                        Yeah, I’ll say this without spoiling it. Doc is so hell-bent on revenge since episode one that he only – he’s got like tunnel vision. So, he’s kinda stupid about it. You know what I mean? He doesn’t realize what could hurt him or kill him and I don’t think he cares. He wants revenge. That’s why he’s in the alliances he’s made throughout the episodes. It was always because he’s got one end goal and one end goal only, and that’s to get revenge on the witch.

Tim Rozon:                        I mean, yes. She is the witch. The is the stone witch for a reason. Don’t start because this is Emily Andras’ show. Nothing is ever gonna be easy. Nothing’s ever gonna be the way it supposed to be. They’re brilliant. Emily Andras is brilliant. I’m such a fan, it’s not even normal and all the writers of the scripts. Because don’t forget, you wouldn’t be talking to me if it wasn’t for this stuff they give me to do, right? I don’t do anything. I hear a piece of tape and I say all this stuff that people wrote and I try and make it come true, but the stuff that they write is so good.

It’s so amazing, but I’m also biased because it’s my genre and I’m saying that I would have been a fan of this show whether or not I was on it, right? Give me a villain that I wanna kill so bad and finally get the chance to kill and then reveal if I kill that villain, I die myself? Yeah, thanks! 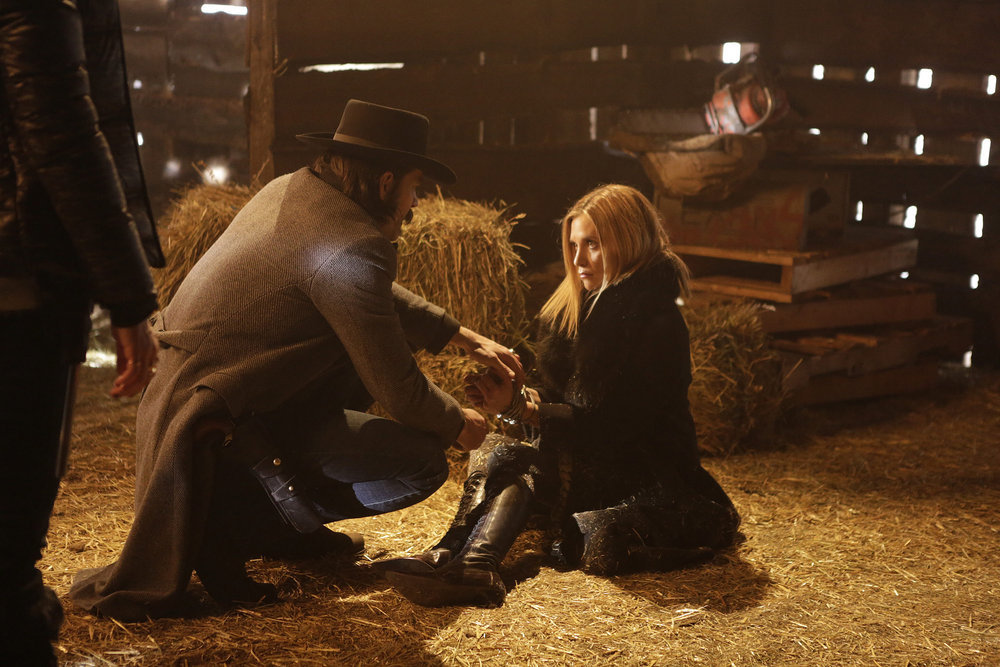 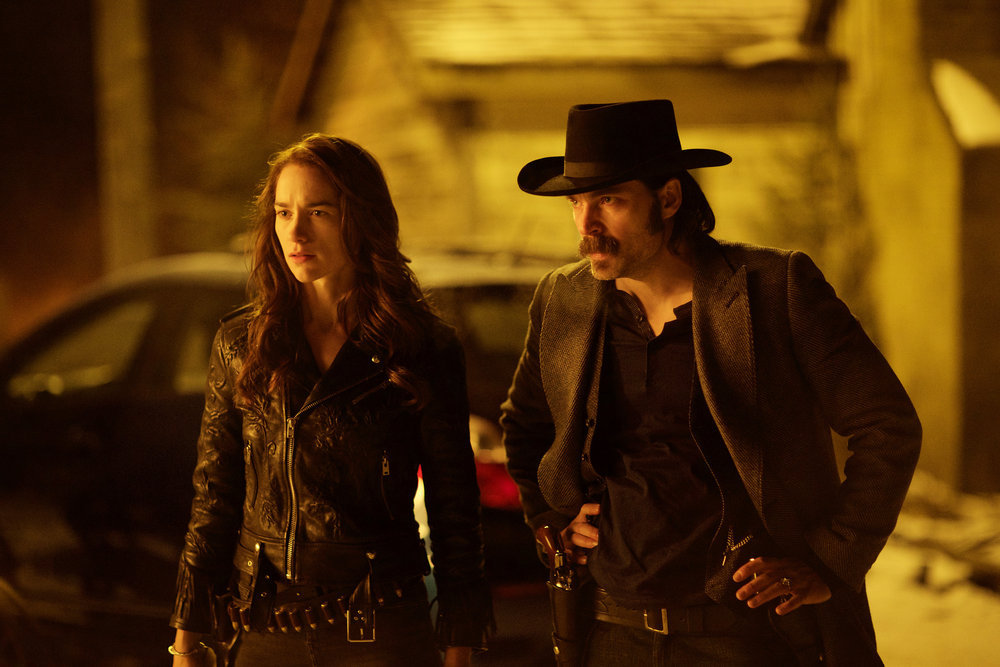 You know, I don’t think he’s big on asking for help but he’s been pretty lucky and someone saves his ass already a couple of times, right? He’s lucky that he’s somehow become friends with a hero who will save his hide from time to time.

Let’s face it.  Doc is really lucky to have Wynonna. There you have it guys! Stay tuned for a Part III because I thought the audition process was interesting considering the roles they have now.

What are your predictions? What is Bobo’s end game?  Will Wynonna be able to stop him?  What do you like most about Waverly and Officer Haught?  Sound off below in the comments!

The Men of Wynonna Earp Part I