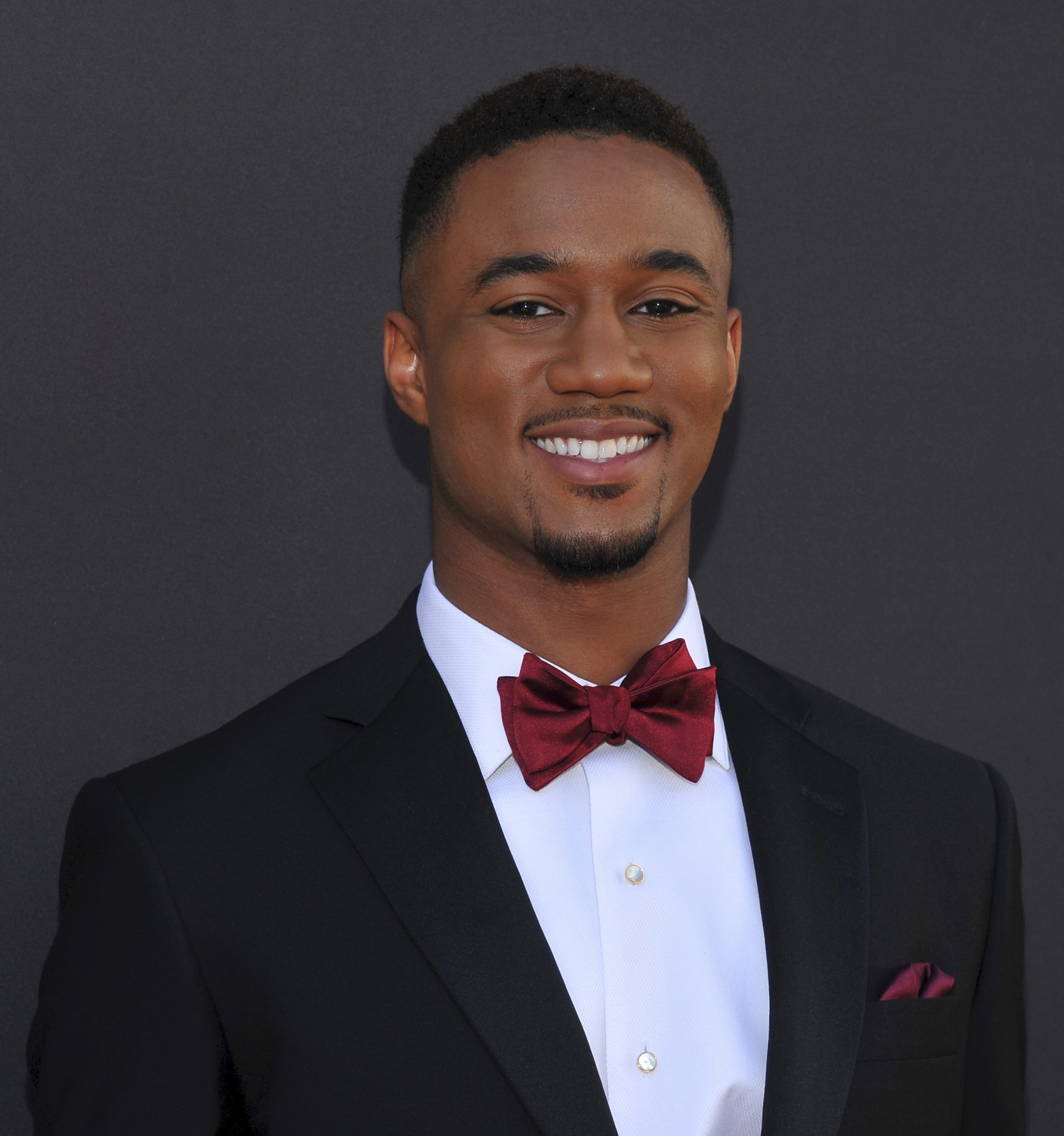 [Warning: Spoilers for Season One of the “The Boys” below]

At the end of season one of Amazon Prime Video’s show, “The Boys,” aquatic superhero The Deep (Chace Crawford) had been exiled from the team he belonged to, The Seven, and their home base of New York City to Sandusky, Ohio, a demotion akin to being sent down to the minors from a major league baseball team.

Meanwhile, a fellow member of The Seven, the speedster A-Train (Jessie T. Usher), had suffered a heart attack from too much Compound V, which was revealed to be the drug evil corporation Vought International used to create super-powered human beings in the first place. His place in The Seven, initially more secure than The Deep’s, seemed tenuous.

Despite their differences in relation to The Seven, though, both characters have one thing in common: an unquenchable need to be in the greatest superhero group in their known world.

Crawford, whose resume includes playing Nate in TV’s “Gossip Girl” (2007-12), and Usher, who has been in films such as Shaft (2019) and Independence Day: Resurgence (2016), recently sat down via Zoom with reporters to talk about their characters’ journeys ahead of the second season premiere of “The Boys.”

Part of The Deep’s personality in the first season was a comic lack of self-awareness of his shortcomings, while A-Train seemed to ignore a sense morality at will. The Nerd Element asked how both actors would be navigating what appeared to be the character’s own blind spots to their faults in the new episodes.

Crawford spoke first. “I think that’s exactly what it is, is a blind spot,” he said, adding that The Deep “doesn’t have a real identity. It’s all sort of constructed in his mind and enabled by his position at Vought, this elevated, privileged position.” Losing that privilege causes The Deep to be “faced with that reality that most people face at some point: ‘Who am I?’”

“He’s a bit like a child,” Crawford continued. “I don’t know if he really can even grasp or fathom what it means to fully change and have that transformation into a real human being.” Crawford noted that The Deep will do anything to get back into The Seven, even going on a “spiritual” journey: “He has good intentions he wants to follow, and—well, I can’t give too much away. But yeah, he definitely goes on that journey a little bit.”

“I think the difference between The Deep and A-Train,” Usher said, “is this perspective. The Deep might not know what it is that he’s overlooking, but A-Train is fully aware. I think he knows exactly what his problem is, but he just doesn’t care.”

Usher stated that A-Train only cares about what he has in The Seven, that “he’s reached a status in life and he will do anything to maintain that status. And anything less than that is just not as important to him. It could be as crazy as killing someone. Literally killing someone is not as big of a deal to A-Train as losing his status in The Seven.”

“That’s the scary part about him,” Usher continued, noting that the money and power and fame A-Train has achieved as a “supe” drives him to drastic, irreversible actions.

“It’s not that he doesn’t see it; he knows it’s there. He’s just choosing not to deal with it,” Usher said. A-Train is in “a very dangerous place for him and it’s something that he’s going to have to deal with in season two. But right now, he’s content with turning a blind eye to it.”

Other issues from the first season will continue into the second. Crawford says that The Deep’s sexual assault of Starlight from season one will be addressed more, but it’s thorny: “It’s obviously touchy because how is that ever okay? How is she ever going to be okay with him being back in The Seven?”

While noting that he cannot spoil the upcoming season, he did say that The Deep’s actions, motivated as they are by selfish reasons, doesn’t mean he’s not sorry. “At least on the surface [he’s] very sorry,” Crawford said, “and probably more sorry for getting caught and getting called out and feels embarrassed. Who knows to what depth of authenticity that goes to.”

Crawford also discussed The Deep’s “emotional tailspin,” which makes him vulnerable to people who may want to use him for their own ends. “Anyone that comes along with any sort of philosophy to reach out a hand, he’s very vulnerable to adopting that,” Crawford said.  “He’s willing to listen to anyone’s advice or opinion—maybe he isn’t even aware of it—to serve his purpose of getting back in The Seven.”

By contrast, A-Train still has a place in The Seven because of his physical abilities despite his heart attack. “He’s made it very clear if he’s not the fastest, he’s replaceable,” Usher said. Taking even more Compound V despite the negative consequences “can’t turn him into a super-superhero,” he noted. Or a god, as Homelander likes to say of himself.

“You can only imagine what’s going through his head now,” Usher said, such as wondering if A-Train can maintain his place without more drugs. “There’s also the dynamic of Vought,” he mentioned. “There’s a lot that you’re gonna learn about Vought in season two, what they know and what they’re aware of and what they control and how that applies to A-Train.”

Then there’s what’s already been revealed about Homelander “and how those things apply to A-Train and his physical abilities and his status in this world,” he said. But as with all athletes nearing the end of their careers, A-Train has much to consider, Usher believes.

“It’s lot for some digging and some self-discovery and we’ll see all of that,” he said.

While the above may seem super-serious, both actors also enjoy the humor of the show, which showed up in their own senses of humor during the roundtable. For example, Usher was asked to rate his running abilities where zero is the lowest and “Tom Cruise” is the highest.

“I know Tom Cruise is pretty awesome,” he laughed. Usher shared a behind-the-scenes anecdote about A-Train’s race against Shockwave in the first season. A truck rigged with a camera drove “down the track as I was running,” he said, “because they were thinking they might show a shot of A-Train just passing by Shockwave in the race. And the note that I got was, ‘We need you to run slower because you’re running past the frame of the actual shot.’”

Usher said that playing A-Train meant having to “haul it” down the track. “The last thing I want to hear is that I need to run slower,” he said jovially. “I don’t know how fast Tom Cruise can run, but I’m just saying I outran the rig. That’s something I’m gonna keep with me forever.”

Crawford also has a sense of humor about The Deep, who is frequently the brunt of jokes and more than a little ironically named. “It’s funny with my character. They wanted to cast someone with gills. I have gills,” he deadpanned.

Crawford did say that as someone who likes to swim, he was excited to do some water stunts. However, The Deep is even less in the water in the new season and more “in a therapist’s office, which I’m also used to—no, I’m teasing,” he joked.

“We did get to do some cool stunts in the first season,” he said, adding “I just think it’s so much more interesting and funny to see him going through what he’s going through in season two and all these weird journeys—that satire part of it…to see the Aquaman guy, the fish guy, be this like deeply insecure character is very interesting to me. And that’s what drew me to the show in the first place.”

Both actors are grateful for showrunner Eric Kripke’s scripts and ideas for their characters, and what it means for the second season. Usher noted that Kripke is “about character development, and story arcs and things that are meaningful and real to these people. And he’s allowed us to expand on these ideals and really get deeper into things.”

“I’m always laughing from reading most of the stuff,” Crawford said. “Every time it’s a big surprise and shock where it’s going and every time, I’m like ‘Perfect! Sign me up!’’

Usher admits, though, that, he was surprised at some of the turns his character takes. “I was a little shocked at where A-Train’s story goes [in season one], and I’m even more shocked to where it goes in season two. I could say as someone who’s seen all of season two at this point, I have no idea where we’re going in season three; I have no clue. Like I just don’t know. But I look forward to seeing because I know it’s gonna get even deeper. And that’s something that has pretty much been guaranteed since the start of this show is that the time and the energy will be put into digging out real story arcs for these characters.”

Crawford said that Kripke is great at moving stories forward. “You can fall into the trap of doing a season two and trying to revisit old tropes and just recreating the stuff we’ve already seen, and he didn’t,” he said. “He just had the foot on the gas and kept going.”

Amazon Prime Video’s hit series, “The Boys,” returns September 4, 2020, for a second season of mayhem, fun, and therapy, with three episodes being available at once, followed by one-per-week for the rest of the season