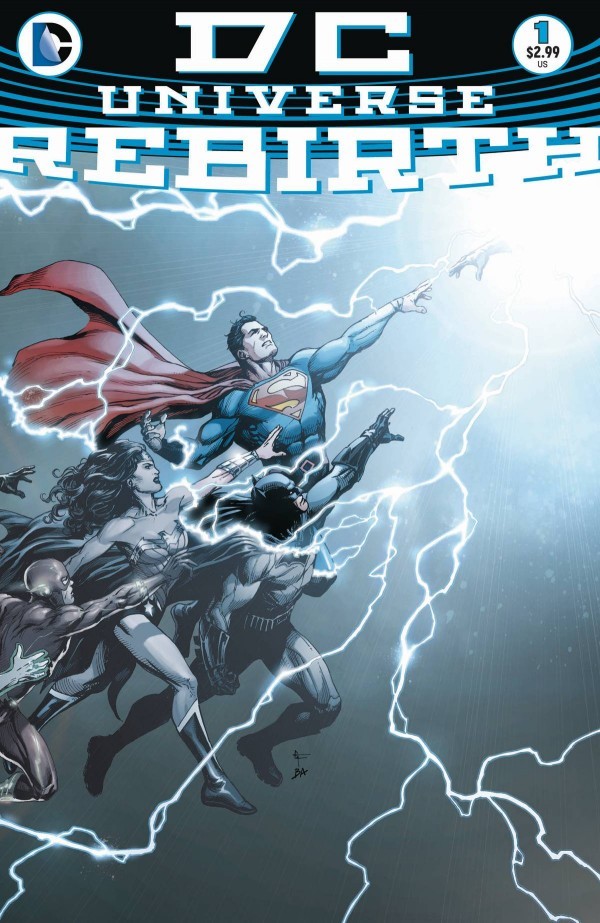 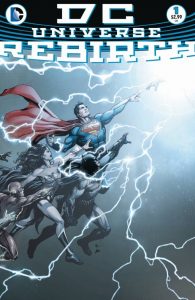 NOTE: While I am not divulging MOST of this issue’s spoilers, I am revealing the identity of the catalyst. If you don’t want to find out who has been tugging at the thread and slowly unraveling the tattered fabric of the New 52 Universe, find another review.

If you’re a DC Comics fan familiar with Crisis events, you will already know that ‘Rebirth’ contains all the necessary ingredients needed for any Crisis. Flash forward to the next paragraph if you’re ready for the afore-mentioned spoiler. 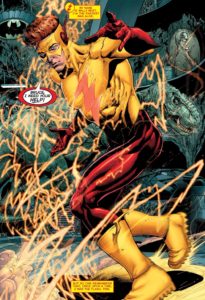 Approximately 5 years ago, DC Comics introduced us to a changing universe. The Flash (Barry Allen) and his nemesis, The Reverse Flash (Professor Zoom) waged a battle across time. Allen was trying to ‘fix’ the killing of his Mother (perpetrated by Zoom) and he was willing to use the Speed Force to stop his Mother’s death. In doing so, the fabric of the DCU was compromised and a ripple effect of significant change began to permeate throughout DC’s publishing empire.

This Flashpoint event should have ended with the entire extinction of the DC Universe, period. Leave it to the Flash and Batman (not Bruce Wayne, actually his Father in this alternate timeline) to score the big rescue. Except…it didn’t exactly set things back to the way things were prior to Flashpoint. Way to go, Allen!

DC Comics was continuing to lose ground to its chief competition, Marvel Comics. DC needed a refresh and they created the Flashpoint Event to transform their entire line of comics. Every DC title ended, dovetailed into the Flashpoint event and then the conflicting universes went ‘boom.’

For the first time in the history of DC Comics, all the books were ‘reset’ and launched with 1st issues.

Historically speaking, there are a lot of negatives (and a few positives) that could be included in the next 10 paragraphs. However, the details of yesterday don’t matter nearly as much as the hope for tomorrow.

DC Universe: Rebirth 1 delivers the comic I’ve been waiting to read since the 3rd or 4th month of the ‘New 52.’ After years of neglect, we’ve received a beautifully rendered Apology Card from everyone at DC Comics.

Writer Geoff Johns is letting us know that he sees how the DC lost its Heart and Soul. Relationships and Legacy were cast aside for revitalized costume designs with far too many seams. Heroes were brash, unlikeable, untrusting and operating within ambiguous timelines. More focus was placed on Superman’s noticeably vacant ‘red underwear’ than on the years of carefully forged continuity left abandoned along the cobblestone road of the old DCU. Some pre-52 events DID actually happen, some didn’t, and still others had their position changed several times over the course of the last several years.

Focusing back on DC Universe: Rebirth 1, Johns returns to a winning formula for his ‘Rebirth’ titles. In both of his earlier ‘Rebirth’ books, ‘original’ characters were brought back from the dead and their legacy versions (those who earned the opportunity to ‘replace’ the fallen) were retired.

A few years later, Johns and Van Sciver’s Flash: Rebirth; this time, Barry Allen was returned to the DC Universe and placed back in the role as The Flash. For almost 20 years, Wally West (Allen’s nephew) was The Flash and now he was sidelined and locked away in the dugout alongside Rayner. West would end up with the worst deal of the bunch. He actually died in the DC Proper universe and was even replaced in the New 52 with an alternate version. Of course, does The Flash ever really die? I mean, c’mon.

DC continuity had built a Legacy contingency within their franchise characters. Speedy would ultimately replace Green Arrow. The Green Lantern Corps provides extra flexibility in allowing for dramatic change when it came to ring-bearers. Nothing was more dramatic than the transformation of Hal Jordan into Parallax and the subsequent slaughter of the Guardians. With this change, a new Green Lantern was chosen in the form of Kyle Rayner. Batman had Dick Grayson (and arguably, a few of his past Robin sidekicks) as his back-up. Kid Flash eventually became Flash and the next junior speedster (Impulse) became The Flash until, well…he died. 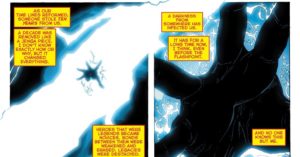 Examples of legacy exist elsewhere, but these remain strongest for this reader. The New 52 trashed, amended and warped the Legacy concept with a sense of contempt. Senior DC Executives blew off the negative feedback and said that writers and artists could produce newly invigorated work without the noose of ‘continuity’ hobbling their efforts.

What followed was a rampant disconnect within the publisher’s infrastructure. Creators were fired or walking away from books, DC Editorial was making last minute changes and as it turns out, few seemed to dictate their own path. In other words, one noose had been traded for another.

Flash forward 4 years and we find DC Comics numbers are far below expectations. In fact, they are generating only about half the revenue of Marvel Comics. The only DC books that manage to consistently sell at respectable levels come from the hearts, minds and hands of Scott Snyder and Greg Capullo.

DC Comics: Rebirth is looking to resurrect itself in this version of DC’s Crisis events.

This is why West’s integral role as the series’ chief protagonist is so monumentally glorious. He’s fighting to return the heartbeat to the Universe that many have forgotten but still exists within himself. West is so intent to resuscitate his friends and family, he’s willing to surrender to Death if it means that their fate may be spared.

In order to cement himself in the altered timeline, West must connect with someone who still harbors the faintest semblance of his memory within minds that have been erased and rewritten. Minds that don’t remember anything about a ‘Wally West.’ Nobody seems to remember the Legacy characters; the ones who counted as Family and brought Heart and Vigor to their namesakes.

Without making a connection with his chosen targets, a tenuous connection to our timeline is lost and he is sucked back into the intangible nature of the Speed Force. Each time West returns to the chaos of the Speed Force, his molecular structure is being torn apart. Sheer force of will and true heroism keep him pushing beyond reason, struggling for one last opportunity at reaching just one friendly face that may remember the man he was. So that the man can help fix all that is broken.

By the end of the issue, we’re starting to feel all is lost. It’s heartbreaking seeing West reach out to people he spent years of his life with and nobody remembers him. His body and his heart are torn asunder and he’s yanked back into the Speed Force. West has lost all the ground he could afford to lose and is precariously close to losing the Fight. One last chance at Hope and it has almost faded before a whisper escapes the lips of his namesake… 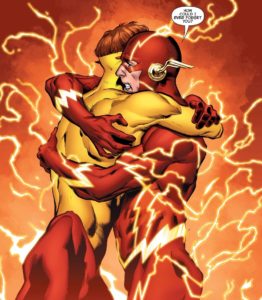 This is exactly the book I never expected to see from DC Comics again. I had high expectations prior to reading this issue and every hope I had was exceeded exponentially. Johns addresses the loss of legacy and the heart of what made the DCU beloved by so many of us. The artwork is gorgeous and I hazard to guess what prices the marketplace will support for some of these original penciled pages.

DC Comics: Rebirth stirred something in me that I have not felt from DC Comics in years…it gave me HOPE. Wally West and Geoff Johns may very well save the Universe, after all.