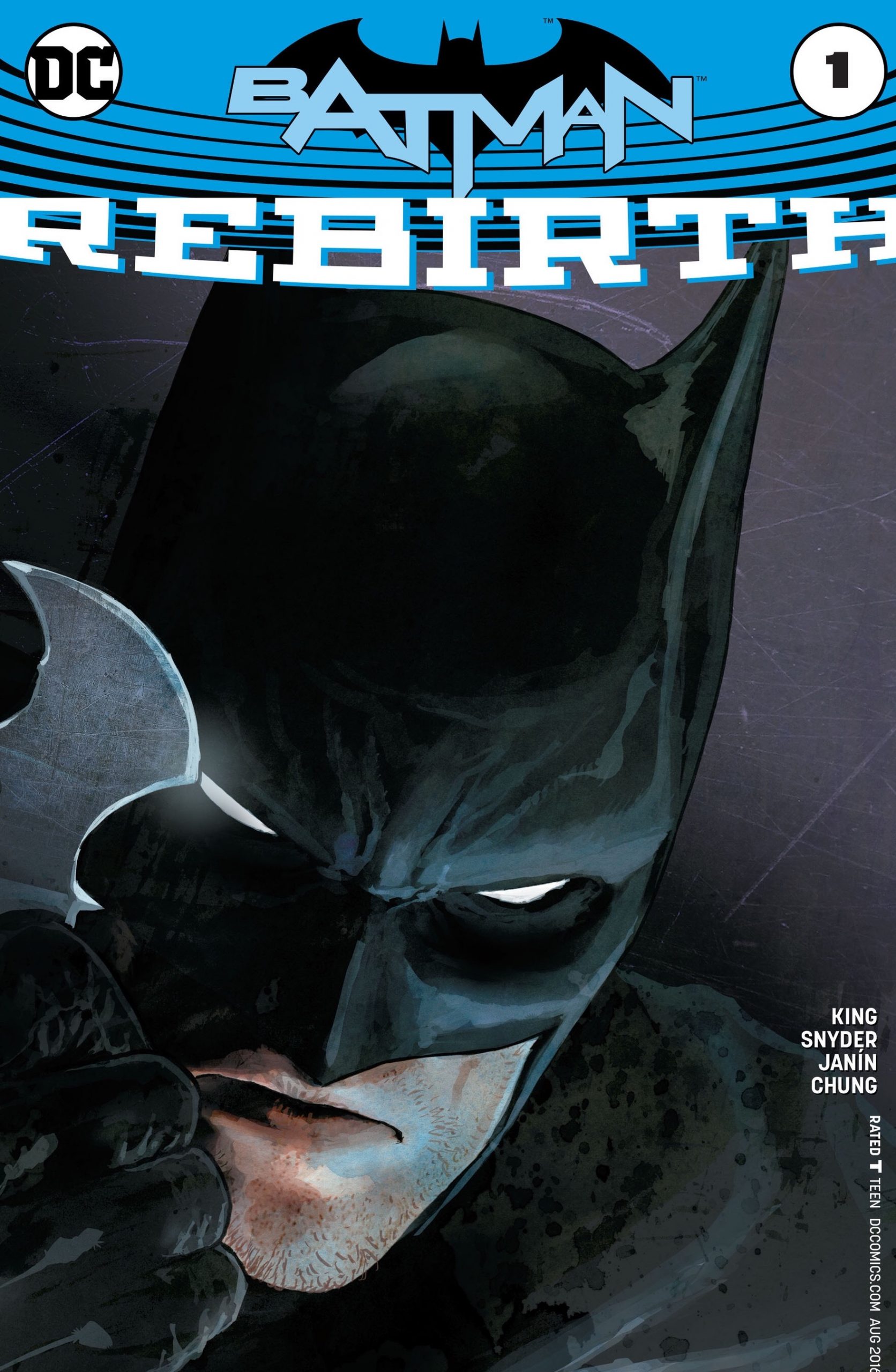 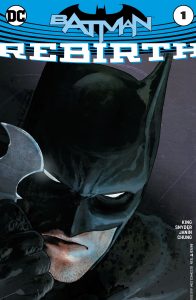 Batman: Rebirth 1 arrives one week after the tremendously successful DC Universe: Rebirth 1 (which you can read my review on here). Last week we were given a preview of some changes in the landscape of the New 52 Universe. Along with Batman, Superman and Green Lantern are also published this week.

It’s difficult not to set high expectations before even opening the cover to the book. Geoff Johns (along with contributions from some stellar artists) unleashed an 80-page mission statement. DC Comics is aggressively addressing areas where there are acknowledged missteps. The New 52 opened up an opportunity for the publisher to update their franchises and introduce new product to the marketplace. It became immediately evident that Editorial did not employ consistent ‘rules’ across the New 52. Inconsistencies including tone, character design, retroactive continuity and amended timelines. These inconsistencies contributed to sales attrition and the cancellation of many titles. In some cases, properties were cancelled and relaunched several times. Constantine is a prime example of this phenomenon.

The 1st issue of Batman: Rebirth mirrors the reintroduction of Batman at the time of the New 52 launch nearly 4 ½ years ago; not much appears to be different. Batman is one of the few DC titles that continue to place in Diamond’s Monthly Top 5 Sales Charts Writer Scott Snyder has enjoyed great success (critical and financial) with the Batman property. As a result, he’s operated with an autonomy that other creatives have not been granted.

The issues’ co-writer, Tom King, has made a name for himself in just a few short years. King is an ex-CIA agent (counter terrorism) and has used his unique insights and experiences to fuel his storytelling. His quality of work and building momentum of his brand has helped King secure an exclusivity contract with DC Comics. These types of contract seem to drift in and out of favor, but recently they are quite rare. Exclusivity contracts cement a contractual commitment between the individual and the organization. In most cases, creatives work for the publishers on a freelance basis.

Snyder is stepping down from the credits with the 2nd issue and the mantle has been passed to King. I imagine there are more eyes on King right now than at any other time in his career. Wait, except for the whole CIA part. I’m afraid I’m not at liberty to divulge any details on that matter.

Batman’s supporting cast of characters looks the same as last time we visited, with some notable modifications. James Gordon’s most recent alterations are missing. He’s not leaned down with the physique he employed as RoboBat. Whether or not he carries the title of ‘Commissioner’ is unclear, but he does have a position of command and the police appear to be on good terms with Batman.

Alfred has also benefited from the Rebirth touch-up; he has his hand back. Lucius Fox is static in appearance and role as Bruce Wayne’s Chief Financial Council. Duke, the standout from We Are Robin is working alongside Batman in a role that is not labeled ‘Robin.’ As of right now, he’s wearing a lithe yellow and black armored suit with the coveted Bat symbol on the chest.

Artist Mikel Janin employs hybridism in his approach to his pencils and design. Action scenes or moments of high impact are drawn with fine detail. Characters and backgrounds are rendered in lush intricacy. Character moments and wide shots of architecture become more simplistic and take on a Manga influence.  I actually found myself checking the credits on the book to make sure that this wasn’t just a combined effort when it came writing. The storytelling was a bit disjointed at times although there are two stand out pages that more than make up for any momentary clumsiness. Add in a 3rd point of reference to Janin’s artistic arsenal; incorporating complex page layouts similar to J. H. Williams III. The first 2-page splash provides a great example. 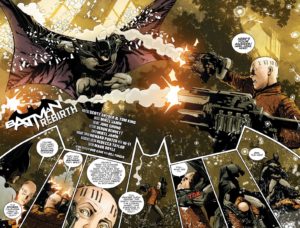 Our villain is Calendar Man and the plot and theme of the story centers around accelerated seasonal transitions. Through the release of some rather nasty spores, Calendar Man has began manipulating Gotham’s natural cycle of growth, death and rebirth. The cyclical nature of life in Gotham is a theme that is less nuance and more blunt trauma. There are several heavy-handed examples that lessen any inherent dramatic impact.

One example is an introspective moment when Bruce Wayne waxes poetic about the perpetual loss and gain of the family fortune. In the same conversation Bruce’s father is discussed, specifically his role in the medical profession. He would heal the sick and they inevitably became sick again.

Batman and Duke (They really need to get something snappier here), fight and persevere against unreasonable odds in order to circumvent the artificial manipulation of Gotham’s weather. During Batman’s epic struggle to thwart Calendar Man’s plan for his death spores, Duke continues to warn Batman of insurmountable conditions. Duke is fearful for Batman’s life and attempts to label the exercise as impossible and terminal.

Impossible doesn’t register with Batman, so he goes ahead and just does his thing. You know, save Gotham.

At this point we revisit another theme that is mentioned earlier in the book. The premise is that fighting against the inevitability of gain and loss is a form of madness. It’s a madness that Batman embraces and it’s what makes him an unstoppable force for change. He refuses to acknowledge personal limitations.

Blame it on Global Warming or the New 52

The references to changes in weather address Global Warming concerns, but I believe the intended subtext is deeper. Here we find some of the welcomed subtlety that’s been mismanaged until now. The natural order of seasonal changes and the subsequent Death and Rebirth can be tied to the New 52 experiment. The established patterns of Life in the DC Universe had changed. As a result, the environment and the people changed.

Maybe Synder and King are telling us that Winter was here too long and it’s time for Summer. To fight the inevitability of ‘this is the world we live in’ is madness. Batman will take the label of madness if it means that he continues to challenge assertions of what is possible.

The Verdict is In

Batman: Rebirth 1 falls well short of DC Universe: Rebirth 1. The mission statement of both books is different and therefore, the impact is lessened with a single-character title.

This feels like another arc in the Batman Universe that we’ve all been living in during the Snyder years. It’s not a bad thing at all, but it’s also far from a Rebirth. I’m quite curious to see what King has in store for Gotham and its greatest champion.

Batman: Rebirth 1 earns a B-