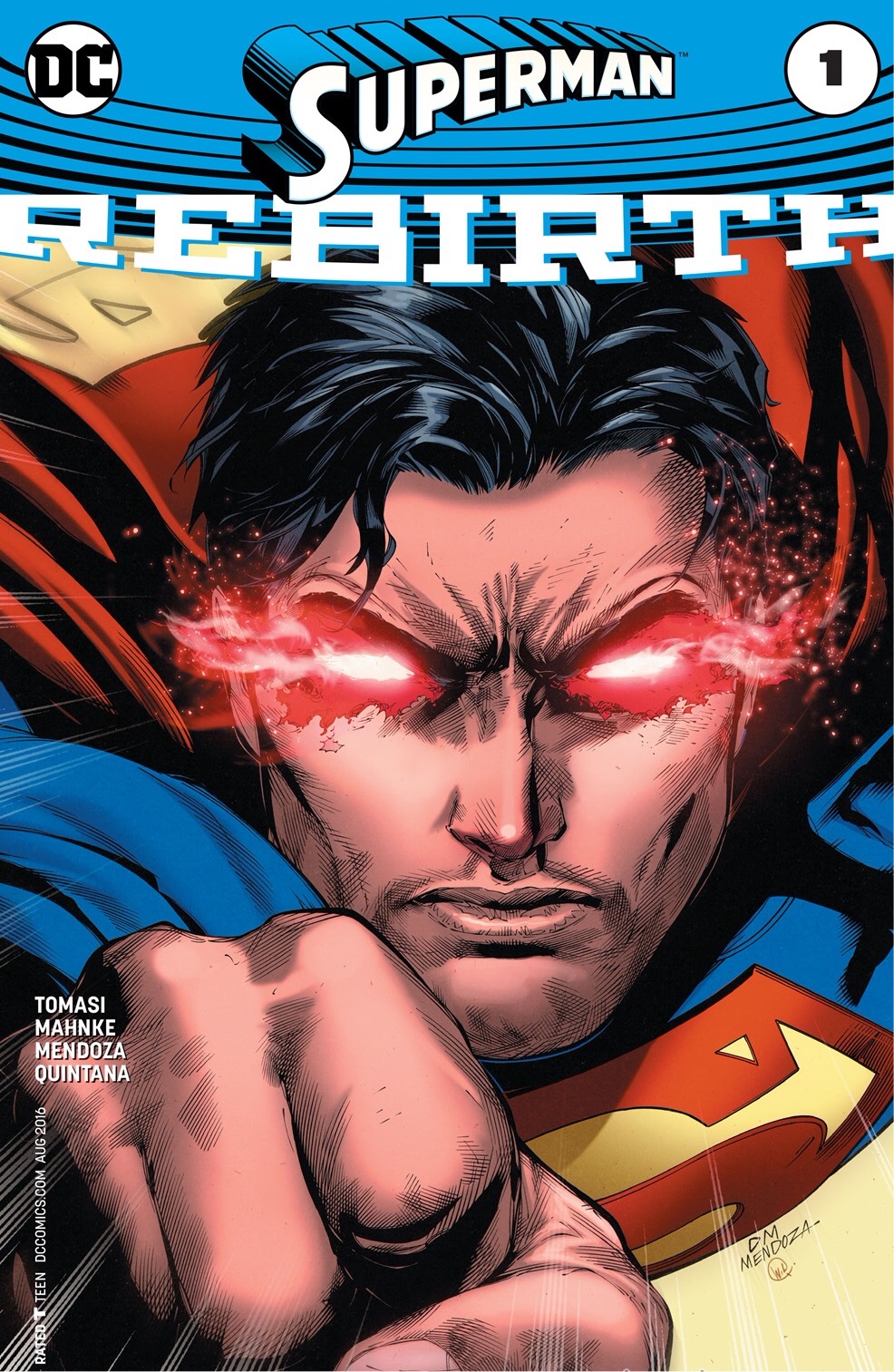 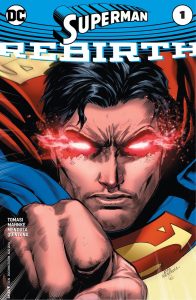 If you haven’t been keeping up on Superman’s developments within the New 52 Universe, Superman: Rebirth 1 is going to offer you a crash course on the death of the New 52 Superman. If you’ve read Superman #52, you’re going to enjoy an enriched reading experience. The details of this Superman’s death are touched upon for the point of context, but the real weight comes in the characterization provided through Writer Peter J. Tomasi and Artist Doug Mahnke.

The ‘old’ Superman we remember from the Pre 52 is still alive and well. There have been some adjustments that readers have been devouring in the pages of Superman: Lois and Clark. Written by longtime Superman scribe (and artist) Dan Jurgens, drawn by Lee Weeks, this 8-issue series gave diehard Superman fans what they’ve been without for almost 4 ½ years. The definitive Superman stays in the shadows, protecting his identity and heroic actions so that he and wife Lois Lane can live in peace with their son.

And There Shall Be A Child

The introduction of a child is a continuity tweak that adds weight behind the familial impact of their very presence in the New 52. At the time of the relaunch, DC Comics had all but purged established relationships from the line. Humanity was sacrificed in order to make heroes young and adorned in revised costumes with many seams.

DC has stated publicly that the Rebirth project is their attempt to reconnect with their audience. Their Rebirth books are the testimonial and we’ll need to await all the evidence before any conclusions can be drawn.

Superman: Rebirth 1 adds a strong checkmark in the ‘positive’ ledger.

Can A Kryptonian Die?

Pre 52 Superman is standing over an unfinished memorial, built to honor the memory of the New 52 Superman. During the events of Superman issue 52, New Superman sacrificed his life in a final effort to save Earth while allowing for Old Superman to reclaim his original role.

This issue discusses the loss of a hero. For Lana Lang, the loss is that of Clark Kent from Smallville, Kansas.  For the greater society, the world has lost their greatest hero. Of course we’ve seen this before when Pre 52 Superman died while battling Doomsday. 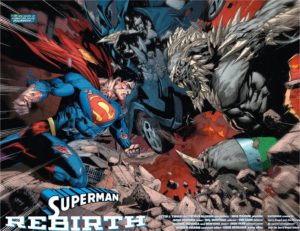 For this reason, Superman recalls his own ‘Rebirth’ and is set to assist with the resurrection of this world’s Superman. Death for a Superman is just a temporary setback.  For that reason, Superman is set to covertly retrieve Clark’s remains so that he can employ Kryptonian technology to aid in his Rebirth.

While reflecting on the events that led him to this moment, he hears activity below the monument. As it turns out, Lana Lang is here on a similar mission as Superman. She is complying with Clark’s final wishes to have his remains buried with his parents in Smallville. The presence of Superman startles her and for a moment, his shadowed countenance and the ‘S’ symbol are visible through the darkness and she runs into his arms.

Apologizing for causing her grief, he attempts to provide clandestine answers to her probing questions about his identity and his actions. Protecting his family’s privacy and trying to avoid explaining the premise of multiple earths, Superman steers the conversation towards his plea for her to have Faith. He explains his own demise and eventual Rebirth. To execute his plan, he needs the Krptonian technology. She asks him if he’s referring to items that may be contained in The Fortress of Solitude. If there’s a chance of seeing a chance at resurrection, the two ‘strangers’ must combine their efforts.

The Answer Awaits In Solitude

Lana professes several times that she knows Clark is gone. She can just feel that his presence is no longer with her. This ‘sense’ has also provided her with the location of the Fortress. She knew of its existence but had never known it’s whereabouts. Perhaps this fuels a small piece of hope that this Superman could actually bring Clark back to her.

Superman and Lana arrive at the Fortress and each find themselves overwhelmed. Lana’s intimacy came from her relationship with Clark. Superman was another life that she wasn’t overly familiar with. Seeing the legacy of his Kryptonian heritage and the grandeur of the Fortress was not something she was prepared for. Superman sees many similarities, but some distinct differences come to his attention. Just as in his own Fortress, a large sculpture of his birthparents stands tall. This world’s Superman had an addition. Included in his sculpture were his adoptive parents. This touching modification to continuity casts a positive light on the darker New 52 Universe.

The Birthing Matrix that had aided Superman’s resurrection is not available on this Earth. Superman was forced to come to terms with the fact that Lana’s Clark was dead. She handles the finality of Clark’s death with poise. In her heart, she already knew that he was gone. It was now time to take him home to Smallville.

Clark Kent’s remains are buried in accordance with his final wishes. He rests beside his family, near his home. Superman makes a modification to the sculptures back at the Fortress. He adds a sculpted image of this world’s Superman, standing beside his adopted parents. The three of them are smiling.

Tomasi constructs a wonderful narrative that spans the course of human emotions when dealing with Death. While Clark Kent does not receive the benefit of Rebirth, the DC Universe will always have a Superman. Clark’s sacrifice in Superman issue 52 included a conscious act that meant Pre 52 Superman would continue his role as Earth’s champion.

I cannot end this review without giving lavish praise to the Mahnke’s pencils. He renders an incredibly detailed visual for a book rooted in emotion. Flashbacks and exposition allow for the inclusion of just a few big action scenes. In those instances, he takes full advantage of the opportunity to deliver high-octane powerful snapshots of epic battles. This is some of Mahnke’s best work of his career.

Rebirth of The Hero

For the span of the New 52 Universe, there is conjecture when it comes to evaluating the heroism and overall character of Superman. Superman: Rebirth 1 does it’s best to put a soft light on some of the harsh terrain that led us to his demise. Clark’s final act was of true bravery and heroism and by sacrificing himself he was able to save the World and allow for the continued existence of Superman.

With the help of Lana Lang, Pre 52 Superman is able to come to terms with the fact that sometimes Death is permanent. This realization allows for Superman to begin his path towards carrying on the cause. It’s time for the Superman to take to the skies, basking in daylight. The shadows had their time and now their time has passed.

Superman: Rebirth 1 earns an A-.