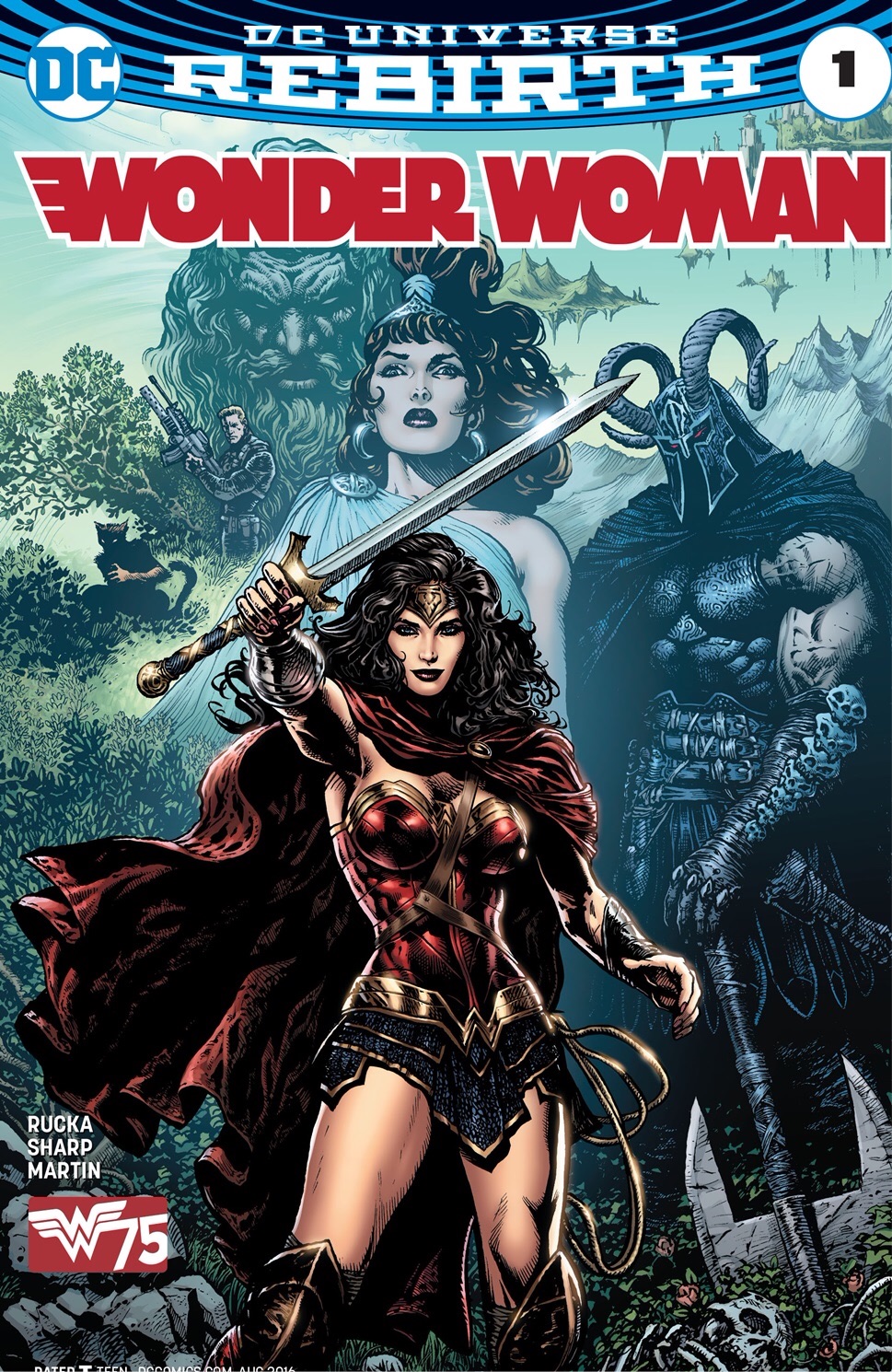 Perhaps even more eventful was that writer Greg Rucka returned to the DC Universe and would script Wonder Woman’s latest journey in landscape of DC’s Rebirth. Last issue, Wonder Woman began her quest to learn her true origins and to confront the parties responsible for the violation of her mind. 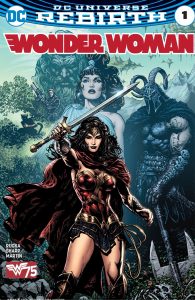 Who Am I Over and Over Again?

Wonder Woman: Rebirth 1 introduced us to a woman conflicted. She spent the entire issue sifting through years of inconsistent characterization and an opaque origin. While virtually all Rebirth titles address New 52 shenanigans mucked with character’s continuity, most books transitioned through this realization and moved forward with their new story arc. More than any other Rebirth title, Wonder Woman became obsessed with the violation to her memories.

Writer Greg Rucka’s primary mission for Wonder Woman’s Rebirth was to club the reader with anecdote after anecdote to prove exactly how mishandled she’d been for the past several years. This heavy-handled edict becomes especially pertinent when you understand the origins of Rucka’s association with Wonder Woman. Not only did he write the title for an extended period of time, he also left DC Comics after a public dispute with DC Editorial. According to reports, Rucka was promised a crack at an All Star Wonder Woman book, only to have the offer rescinded and reallocated to Grant Morrison.

Rucka’s script came across as an indictment of what had been done to a character he clearly cares deeply for. Unfortunately, all of the existential angst is revealed through inner-monologue and makes for an incredibly awkward read. Was Wonder Woman: Rebirth 1 intended to provide a soapbox so that Rucka could inform readers how badly DC Comics had mismanaged one of their most popular heroes? It may have not been the intent, but it was certainly the impression that I was left with.

Does Wonder Woman #1 see our heroine dispense with the angst, instead tracking down the adversary responsible for casting doubt on her self-identity? 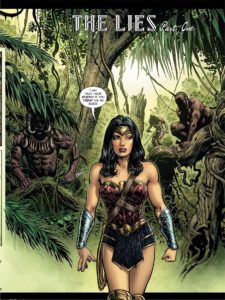 Wonder Woman’s on a mission to discover who’s been meddling with her mind. Reminding us that ‘the story keeps changing,’ she engaged in conversation regarding her quest for knowledge. This is a welcome reprieve from the initial Rebirth issue when dialogue was strictly internal. Leaping and bounding through the terrain of a rainforest in the country of Bwunda, Wonder Woman is maintaining a conversation with…well, the jungle.

Simultaneous to this, Master Chief Steve Trevor is leading a covert military team tasked with stopping a faction of insurgents, headed by a Warlord named Cadulo. The assault happens to also be based in the country of Bwunda. We’re told that Cadulo and his men must be stopped from reaching their target.

The Search For Truth 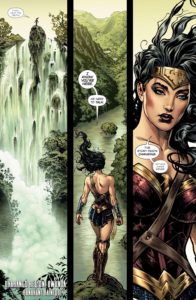 Sensing the presence of her adversary permeating the rainforest, Wonder Woman makes it clear that she would rather not be on this particular journey but she has no choice. She must learn the names of the writers and editorial staff responsible for the litany of horrible Wonder Woman stories tainting her legacy after Rucka’s departure. Or if you just want to take it at surface value, Wonder Woman needs to find out exactly who or what has violated her head to create false memories.

Giving her adversary a three warning disclosure, Wonder Woman traverses the jungle and encounters mounting evidence that the rainforest is evil with corruption. She happens upon a very evil looking sculpture, constructed from the skeletal remains of human and beast. Acknowledging the warning, she continues her countdown towards final warning status. She then tells the rainforest that she seeks audience with their ‘goddess.’ 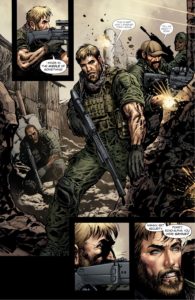 Master Chief Trevor and his company arrive at their destination in Bwunda. They’re too late: the sparse African village has already fallen under attack of Cadulo and his men. Most of the village’s male population fell in defense of the village and it’s treasure.

The Elder tribesman informs Trevor that Cadulo ‘…turns even the Earth against the righteous,’ and that their village’s most precious treasure has been stolen: their daughters. 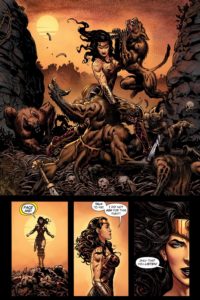 Despite her warnings, the darkness of the rainforest seeks to halt her approach. Approximately a dozen deformed creatures engage Wonder Woman, vicious in their attack. The creatures are a hybrid of man and beast. Their features are similar to a hyena or jackal; or quite possibly, a cheetah.

Standing atop a small mountain of skeletal remains and the fallen bodies of her adversaries, she calls out for the Goddess once again. Imploring her to stop fighting and to simply listen. This time the attack against Wonder Woman is more substantial. She’s slashed and battered from multiple angles in rapid succession. She sustains wounds with each engagement yet she seeks to defend herself rather than return blows.

Wonder Woman lies on the rainforest floor, bloodied but determined to seek the answers to the questions in her mind. Just inches from her face, Wonder Woman regards the menacing feline creature as ‘Barbara Ann’ and broaches her appeal.

Wonder Woman implores The Cheetah to help her find Themyscira. Her home has gone missing and she’ll need to begin there in order to solve the mystery of her true identity. 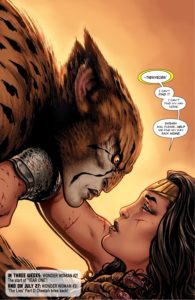 On The Right Path

Thankfully, Wonder Woman #1 doesn’t suffer the same handicaps as her Rebirth debut. Rucka seems to have worked out his permeable angst-fueled diatribe against Wonder Woman’s abused continuity. Metaphysical internal monologues are now external monologues, but filled with much less angst. She is determined and angry but isn’t in a rush to punch everything that growls at her. Instead, she employs diplomacy and attempts to elicit an empathetic response to her appeal for assistance.

The introduction of Steve Trevor and his military unit’s mission against a regional Warlord is a bit clumsy. Trevor and Wonder Woman arrive in the same country at the same time by random circumstance?  Perhaps this is yet another example of the manipulative power at play, taking place behind the scenes. Being just the first issue, there’s plenty of time to add color and dimension to their parallel paths. We do learn that Wonder Woman and Trevor have a romantic history. He still carries her photograph.

Sharp takes on all the pencils and inks this issue. This makes for a more consistent visual narrative than we experienced in Rebirth. The art is simultaneously beautiful and dark. Panels feature intricately detailed minutia flanked by swaths of foreboding blackness. There are a few examples where character’s faces are less than realistic, but these occasions are the exception rather than the rule. 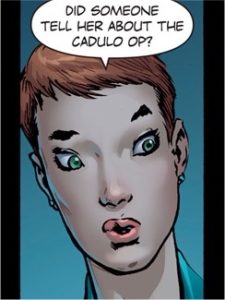 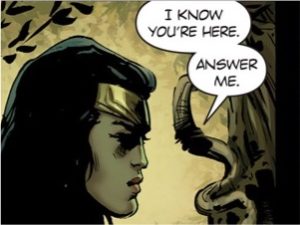 Wonder Woman has an accelerated release schedule, meaning that it will ship twice a month. I have not looked ahead at solicits (they tend to be spoiler heavy), I can guarantee that Sharp will not be able to keep a monthly schedule with this level of attention to detail. With that in mind, I’m baffled why Sharp provided both pencils and inks for a book that is going to require expedient production. I’m hopeful that the uneven art we experienced in Wonder Woman: Rebirth 1 is not a harbinger of what’s to come.

Wonder Woman #1 earns a B