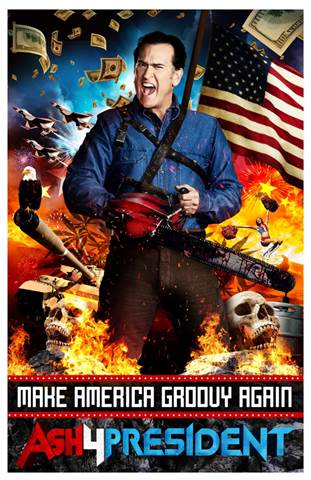 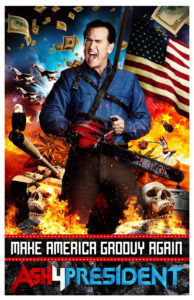 Beverly Hills, Calif. – August 25, 2016 – Today, answering the call of the people, STARZ is reigniting the Ash4President campaign with a new website and killer campaign videos to rally the troops and rock the vote.

Ash is the only man who can cross party lines, because no one likes a party more than Ash Williams. Under the promise of making America groovy again, fans can sign up to receive custom campaign swag, download political posters, and share Ash’s policies across social media. Through www.Ash4President.com and the @Ash4President Twitter handle STARZ will be releasing a series of exclusive political clips featuring Ash Williams giving his take on hot button issues to get loyal fans (err, citizens) to the polls. Ash is still waiting for the invite to the presidential debates but just in case it got lost in the mail he’ll be live tweeting the debates from the @Ash4President handle to make sure his voice is heard. Hey America, you could do worse.

The Tick Is Back, and He’s Bluer Than Ever