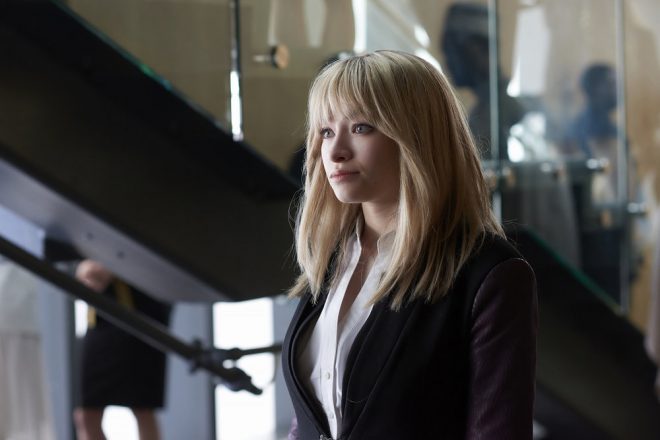 I have no words, except that mission to save the galaxy was soo close! On to the recap!

We start the episode with Commander Delaney Truffault (Tori Higginson) talking with a woman about the upcoming meeting between the major corporations at Eos-7.  The concern is if Traugott’s motion to add members to the council goes through, Ferrous will renege and start a war.  Traugott is trying to get some supporters between a few companies.  Truffault of Mikkei Corp wants to remain neutral for like two weeks before making a move.  An alarm goes off.  One of Truffault’s guards wants to move her to a safe location as a ship broke through their security walls.  When Truffault sees the ship she wants everyone to stand down, she knows who it is.  It’s the Raza of course!

Two (Melissa O’Neil) and Three (Anthony Lemke) meet up with Delaney.  They want to warn her that the summit will come under attack and no one will survive. Truffault has a hard time believing Two and Three in how they knew there would be a potential attack.  Hearing about alternate universes and a ship that predicts the future is a lot to take in.  Keeping it grounded she asks about the blink drive.  Two refuses to give it up.  They are putting themselves at great risk by even being there warning her.  Truffault concedes that they may be in a unique position to help if the blink drive works as they claim.

Kiss and Make Up?

Back on the Raza, Nyx (Melanie Liburd) gets a call from Ryo (Alex Mallari Jr), who is at the palace at Zairon.  He’s sorry for what happened with her brother, but he doesn’t regret it.  He also didn’t mind killing Hansmeed for her.  Yeah Nyx thought that was very romantic of you.  Nyx won’t forgive him for Milo.  Ryo still has feelings for Nyx and wants her to be his Empress.

Ryo thinks she has no future on the Raza.  The crew won’t accept her as she is.  This was not a smooth marriage proposal Ryo! No finesse at all man! Misaki is eavesdropping Ryo’s conversation with an evil look on her face.

Truffault is on the Raza and provides a layout of Eos-7, the most secure station in the galaxy.  Satellites surround the station, creating a field that blocks FTL.  The GA will be preoccupied with being outside of the perimeter and no one will see them coming.  Another set up perhaps? Five (Jodelle Ferland) volunteers for the mission so they can see the security feed.  She will be undercover with Truffault as her assistant. Everyone objects but Five wants to do it.  Six (Roger Cross) is even wondering if they should do anything, that war will be inevitable.  Five remembers what Milo told her about how one person could change things.  Even Android (Zoie Palmer) is worried but Five looks good in her disguise.

Chief Inspector Kierken (Chris Holden-Reid) will head the GA security at Eos-7.  Once all the corps have arrived, Kierken activates the shield.  At the station Truffault and Five, undercover as Cassandra, make the rounds.  Commander Nieman (David Richmond-Peck) from Ferrous greets Truffault. They go off to the side to chat, leaving Five with Nieman’s assistant Arrian (Kyle Mac).  Five declines a drink from Arrian, going to the restricted area to set up access to the security feed for the Raza.  With that done, Five goes back to chit chat with Arrian when he tells her of a last minute delegation from Zairon.  What the hell is Ryo doing there?  Ryo is apparently a representative from the League of Autonomous Worlds and his people can keep their daggers as part of ceremonial garb.  How fortunate for them.

Ryo recognizes Five as she walks by him.  He has two of his men get Five so they could talk.  They catch her with her comm out.  Just when things get hairy Arrian saves the day. Turns out Arrian is an android!  Since she owes him, Five doesn’t report him.  Arrian seems surprised by this as Five is from Mikkei and could use that intel against Neiman since he gave the droid illegal tech to go undetected.

Meanwhile on the Raza, Android discovered while looking at alternate universe news that the bomb had traces of Tarium.  What’s weird is security usually checks for the stuff on ships, so how was it brought onboard? Later there is concern when they see Ryo in the security feed.  However, Android soon finds looping feed where Ferrous ship has docked.  That’s suspicious.  Two, Three, and Six will go in while Nyx and Android stay on the ship.  Three of course is complaining about wearing a suit.  Two promises to let him choose a heist next time.  The three outlaws make it into the station, separating to look for traces of Tarium using a small device from Android.

The meeting between the corporations is underway.  Neiman from Ferrous pleads with the others to not go through with adding members to the Council from Traugott.  The vote happens.  Traugott gets their members.  Neiman wants a recess, which is granted by the Chairman.  Five notices a look pass between Arrian and Neiman.  Curiouser and curiouser.    Six gets caught by Kierken.  Damn it!

Two meets Ryo in his room.  She warns Ryo that Ferrous may try to start a war.  Ryo wants it because the corporations supplying his enemies will withdraw their support, thus giving him the opportunity to win Zairon’s war.  Ryo wants to replicate the blink drive.  His reasoning is it would give him an advantage.  Also since the other corporations are already trying to duplicate the tech why not choose who gets it first?  Two refuses and leaves non-plussed when Ryo threatens to turn her in.

Two later follows Ryo outside of his quarters.  He talks to one of his guards, who leaves in the opposite direction.  Two follows.  Six is brought to a holding cell.  He tries to warn Kierken about Ferrous Corp, but the Chief Inspector doesn’t want to listen.  He even asks about Ryo.  Six doesn’t know King Ishida’s plans.  Three gets caught by Nieman and his men.  One of Ryo’s guards take out security so he can authorize Ryo’s ship leaving.  The guard that Two followed slips into a restricted access area.  She is caught by a GA officer and must turn around.

The meeting recommences.  Five notices Neiman from Ferrous Corp is gone.  Arrian leaves with Five following.  Back on the Raza, Ryo appears and shuts Android down.  He tasks Misaki with overseeing the bridge just in case the Marauder comes back.  The order is if she sees anyone, to use non-lethal force only.

Arrian stops after the gazillion time Five calls for him. Her Tarium detector goes off.  Ferrous Corp left and he’s still there. The bomb is Arrian! Five convinces him to sacrifice himself by appealing to his newly upgraded human side.  Arrian spaces himself so the bomb goes off outside the station.  The sound reverberates throughout the station.  Kierkan has the station on lockdown.

Back at the Raza, Nyx is wondering why Android is not responding to her calls.  She goes to the bridge and sees Misaki.  They fight, with Nyx getting some good hits in.  Misaki cuts Nyx with her poison-coated blade.  Nyx collapses.  Ryo calls Misaki informing her he has the blink drive.  Misaki lies about meeting resistance.  They bounce. Ryo reactivates the Android, telling her he took the drive. The crew has 20 minutes to escape because the station is still going to get destroyed.

Android on comms tells Two, Six, Three, and Five what happened.  Kierken stole Six’s comm so heard the whole conversation.  However, he doesn’t believe that Two and the rest of the crew are not involved, despite Two’s warnings about Ishida already breaching security.  The inspector wants Portia aka Two and Boone aka Three found.  Android finds Nyx’s body.  Kierken goes to the reactor core, finds one of Ishida’s men.  It’s too soon the guard says.  Kierken doesn’t listen and shoots the guard, but not before he overloads to the reactor core.

The Inspector is killed and the station starts falling apart.  Boone wakes up and finds Lieutenant Anders (Jeff Teravainen) looking down at him.  The shield to six’s cell is deactivated, so he runs heading to the Marauder I guess.  Panic has set into the conference room. Trauffott takes Five with her. Two is caught under collapsing walls.  We end the finale with the station blowing up.

What did you think of the season finale? What are you looking forward to for the next season? Sound off below in the comments!