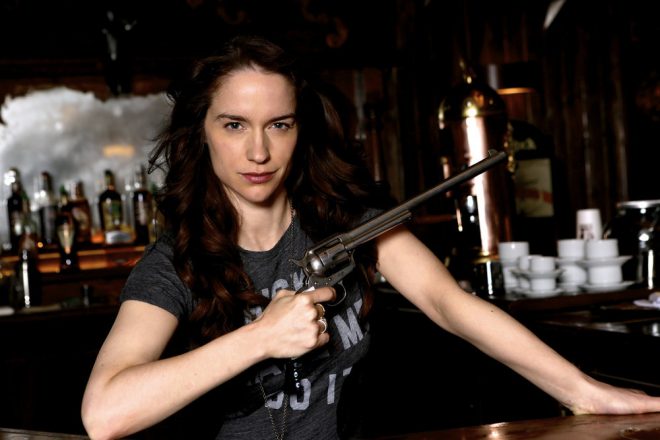 A surprise hit last year, Wynonna Earp is finally back! Now that we are in the 2nd season, the chemistry between the cast has not lost any luster. Melanie Scrofano owns her role as Wynonna Earp, bringing the kickassery while also showing vulnerability. There was a nice mix of humorous wit with serious intense moments for this episode, titled “Steel Bars and Stone Walls.”

The question of who Waverly (Dominique Provost-Chalkley) shot at the end of the season finale is answered at the beginning of this episode.  It was not her sister Wynonna or Doc Holiday (Tim Rozon) thank goodness! Instead it was a new creature called the Hala. That creature deserved to die for eating Doc’s hat! Rest in peace hat! Wynonna hair flipping, the way she introduced herself, AND the slow-mo of her walking with Doc and Waverly was everything! It was a great beginning to the season!

Dolls (Shamier Anderson) has secrets and then some when Wynonna locates the hotel room he was staying in and finds fellow ex-agent Eliza Shapiro (Lost alum Rachel Skarsten).  The wittiness and snark between these two the entire episode but especially this scene was golden! So many one-liners that was on point!

Wynonna plans and executes the rescue of Dolls from Black Badge before he is transferred out of their reach. During the pow-pow I noticed how Wynonna was extra petty when Eliza was flirting with Doc. She already assumed that Eliza and Dolls were “together” when that wasn’t the case.  Throughout the episode it was like Wynonna was threatened by Eliza stealing both Doc and Dolls from her.

I’m glad Wynonna knows now that Dolls is something else.  It would have been messed up if Wynonna was clueless for an entire season.  Doc deciding he would be the one to kill Dolls if he was too far gone was sweet.  Like Doc said, Wynonna has done enough.  What is more intriguing is that Black Badge had a hand in it instead of something he was born with.  How long are we going to wait to find out what the hell he is though?! Hoping it’s not long.

Another scene that I enjoyed was when plan B then C is enacted with Waverly going through the front door with a demon’s head.  Using an English accent, she convinces the lab tech Jeremy (Varun Saranga) to briefly open the door for Doc to slip through.  She then fails to knock out the lab tech but has to leave because another Hala escaped.  Waverly quickly confessed her mission to Jeremy while hiding from the creature.

If you have seen or heard interviews with Dominique Provost-Chalkley, you know that she has a British accent.  I loved that it was incorporated into the show, even if it was her in disguise playing a role.  It was even better when Agent Nicole Haught (Katherine Barrell) commented about her accent being a bad one!

Waverly’s story arc this season is an intriguing one.  The darkness inside her wasn’t there until she touched the blood of that serpent thingie that tried to get through the ghost triangle in the season one finale.  Nicole noticed it immediately because of the taste of her kiss.  Just when Wayhaught was the stable relationship on the show here comes the monkey wrench!

The writers teased us every time Waverly’s eyes went black and no one caught it. When she held off the Hala creature I was like “Oh my!” Another secret that will hopefully be revealed sooner rather than later. Provost-Chalkley still gives an innocence to Waverly but now with an added edge.

Doc has been taking snide remarks poor thing regarding his hat and mustache throughout the episode from Wynonna and later Agent Lucado (Kate Drummond).  He fights back when he succeeds in bluffing Lucado (Kate Drummond) so Dolls can knock her out enough to escape.  That was brilliant having dynamite in his jacket pocket! Too bad he didn’t get to use them.  Seriously though, I mourn his hat.  He needs another one stat!  Rozon is perfection as Doc!  I love the drawl and the way he BS his way out of situations.

A creature escaped using Doc’s dynamite.  More trouble on the way! From the hand shown my feeling is it will be a god/demi-god from either Egypt, India, Thailand, one of those countries.  Wynonna is going to have her hands full! This at least opens the show to more creatures Wynonna sends to hell with her gun.

It was a pleasant surprise seeing guest stars Rachel Skartsen from Lost Girl and Orphan Black’s Kevin Hanchard.  I’m hoping that Hanchard’s character Moody makes more appearances this season.  So disappointing he killed Eliza!  She should have stayed for at least a few more episodes! Especially considering both Eliza and Dolls have the same issue. It would’ve been nice to see them both go off on some demons.

What confused me about that scene is if it’s tradition to sign a contract in blood for Black Badge, didn’t Jeremy already sign one when he started working there, or was he a lab tech for a front company?  Nothing good can come from signing anything in blood.  No telling how soon that’s going to bite the Earp crew in the butt.

Kate Drummond brings the shade as Agent Lucado.  She wants to blame Dolls for her husband’s death, not accepting his version of events.  Why is that? Why wouldn’t she think her husband capable of sacrificing himself for others? I want to see flashbacks! I predict her vendetta is going to get tired quick, especially since Moody likes Dolls.

Methinks Jeremy will help the Earp gang and Dolls figure out his issues.  How much are we going to see Dolls this season?  I’m hoping we continue to see development from his character.  Hedley can’t use his cup forever.

Another thing I’m hoping to see this year is to learn more about Nicole Haught.  What was her life like before she got to Purgatory? Did she adopt her cat? If something happens to Haught’s cat I’m not going to be happy!  Waverly will lose brownie points if she has a hand in it too. I also want to see Wynonna and Nicole bond some more as well.  We saw hints of that camaraderie last season so it needs to continue.

The sisterly bond between Wynonna and Waverly was just another part of the episode that was good. Waverly’s concern was understandable.  Seeing Wynonna run her herself ragged made me want to say something to her across the TV too.  Wynonna needed to take a breath and mourn the sister she had to kill.

Wynonna appears to be embracing her identity as the Earp heir.  She emphasized it several times throughout the episode, needing to affirm who she is and to assert that she is important.  I’m wondering if she needs feel that way because otherwise she doesn’t deserve to be a worthy person?  Am I the only one picking up on that? That’s one reason why I love Scrofano’s portrayal and the way the writers write the character.  It brings more nuance into Scrofano’s performance.

I’m looking forward to what showrunner Emily Andras and the cast throws at us this season! What did you think of the premiere? Sound off below in the comments!