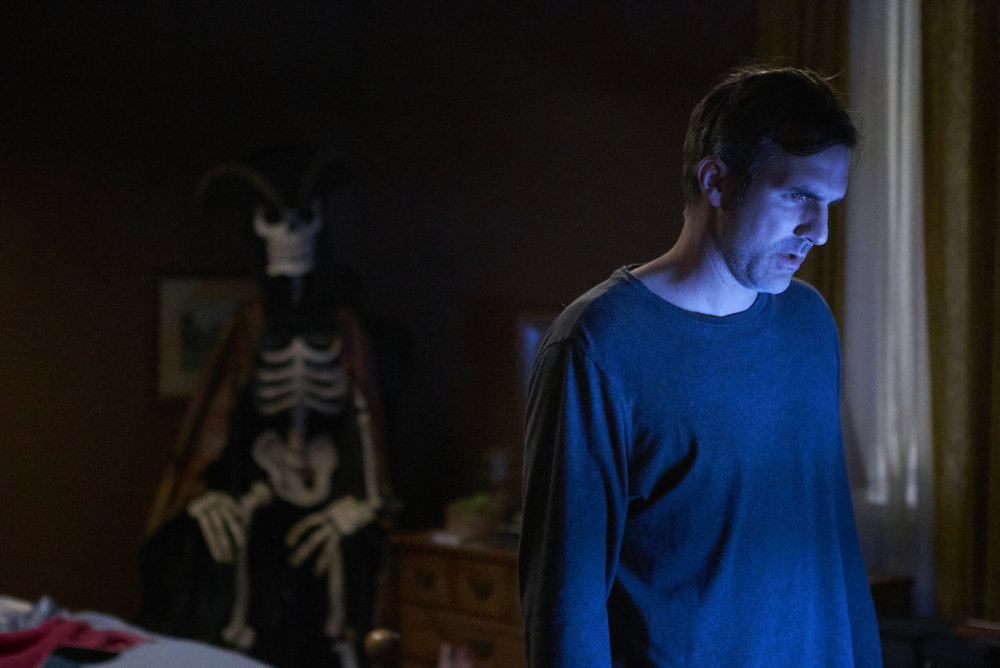 This is usually the time of year where several channels will show the classic horror films and nostalgia could reign.  However when I saw previews for SyFy’s Channel Zero: Candle Cove, I figured I would latch onto the six episode min-series for my horror fix instead of only watching the classics.  I’m so glad I did.  The show has creepy down pat.  The tension is on point, and the combination of scary looking puppets and creepy kids creates a good smorgasbord of creepy horror.  Notice how I like using the word “creepy?”  I have to say that I have not been this freaked out in a long time.  For a description of the show, check out my preview article here.

I got a chance to talk with Nick Antosca, about Candle Cove, which is based on the creepypasta short story by Kris Straub.  If you are wondering what a creepypasta is, it’s “a short piece of horror fiction.” I got that from the FAQ page on www.creepypasta.com, a website I will be checking out in more detail in the near future.   I’m probably going to read the short story at some point after the show ends.  Mr. Antosca has been gracious to discuss the scare fest and hinting at what’s to come. When I asked how he would describe tonight’s fourth episode, “A Strange Vessel” in one word, he said, “unexpected.”   I have to agree with that assessment.

TNE: I am definitely enjoying the show.  It’s just something about puppets that’s really creeping me out here.  I was wondering, was there any puppet or cartoon character that maybe you were scared of as a kid and if so, what or who?

Nick Antosca:    Yes.  It was Chucky in Child’s Play.  When I was a kid, they used to play that on USA all the time.  I remember seeing Child’s Play 2 and Chucky killing the teacher, Beth Grant in a closet in the school room and that stuck with me as particularly horrible.  And also the moment where he comes to life in the first movie, it’s just so nasty and so viscerally unpleasant, especially watching it as a kid, it’s deeply disturbing.  And so, yes, that was one.

We have an element of Child’s Play in Candle Cove in Channel Zero because Don Mancini who created Child’s Play who wrote and/or directed every Child’s Play movie is part of the writer’s room.  He co-wrote episode two, and he also co-wrote the finale and then he wrote an episode in season two and he’s a good friend of mine, I worked with him on Hannibal, too, so that was really cool.

TNE:  I got that vibe in episode two. I was like, “Wow, this is definitely reminding me of Child’s Play just a little bit.”   So for you, who is more creepy?  Is it the kids that are just killing people, the Tooth-Child or even just like the puppets from the show?

Nick Antosca:    It’s the kids to me because – it’s the kids and Mrs. Booth who you see at the end of episode two feeding the Tooth-Child.  To me, that was…

Nick Antosca:  The puppets and the Tooth-Child are certainly scary and disturbing, but I always find real people and characters the scariest.

TNE:  So each episode is interesting as far as the pacing.  With scary movies or just scary shows, pacing is important as well as how many creepy moments you put into each scene or each episode.  What’s the decision making behind that?

Nick Antosca:  It’s actually something that we put a lot of thought into particularly in the writer’s room then also in editing.  If you’re making a horror movie – you’re a TV show and you have too much scary stuff, like too many scenes of stuff jumping out of you, it becomes dull if you know every single scene is going to be something jumping out of that too or always somebody creeping up on something.  It’s predictable.  And I am just personally not so interested in jump scare horror or more traditional style and this show, it was always very important to me to have a slightly different kind of horror in terms of tone and pace, horror that’s based on atmosphere and character.

And some of that comes from having come out of Hannibal which is very much the same philosophy.  And so, you know, we would think about in the writer’s room; “what is the psychology of the scene? Where is Mike?  Where is Marla at this moment psychologically and emotionally and how do we build, dread, and suspense out of that?  So, you know, we made sure to have a philosophy of less is more in terms of actual, you know, “horror movie moments” and then kind of make them count and lean toward the language of cinema and stuff that we loved in, you know, David Lynch movies or stuff like that.

TNE:  Is there a possibility that there is someone familiar that is the Tooth-Child that maybe we’ve already met or seen or – because it feels like in episode three, I was like, “Is there someone that could potentially be the Tooth-Child or become the Tooth-Child?”  So I don’t know if you can hinted that or not.

Nick Antosca:  Yes.  I mean, without giving any specifics away, the Tooth-Child is tied into the character story and the mythology that we already know.    And I also don’t want to be too literal about it, the Tooth-Child is a figure from nightmares and it has a symbolic meaning that sort of dictates what it does too.  And, you know, that’s the kind of thing that I appreciate in the sort of nightmare-ish horror that I love to watch.  You know, in making this show, Craig McNeil, the director, and I were sort of like, “Well, you know, I don’t know that a lot of people are going to watch this, who knows.”  We just wanted to make something that we would want to watch ourselves, sort of [an] independent filmmaking philosophy rather than a ratings-based approach to making to TV.

TNE:  Are the episodes of the Candle Cove show repeats (like from when they show flashbacks) or new episodes that the present kids are seeing?

Nick Antosca:  I think there are some repeats and some new episodes.  Like you’ll definitely see – you’ll also see variations on episodes.  Like at the end of the pilot, you see a clip that you then see again at the beginning of the second episode but the dialogue is different.  So we want to suggest that the show is kind of an organic changing thing.

Nick Antosca:  Exactly.  At the beginning of episode two, you see a clip from the news in 1988 and then Candle Cove breaks through it and then when we come out of that footage of Candle Cove, it’s Katie watching at the present day.  So that’s not something that I, you know, expect casual viewer to notice even but the intention is to suggest that this thing kind of spans decades.

TNE:  OK.  That makes sense.  Yes, I was – I kind of got that vibe but I wasn’t a hundred percent sure so thank you for that.

Stay tuned for more conversations between Antosca and some of the other cast from Candle Cove!  Show writer Nick Antosca, director Craig William Macneill, and the cast and crew are doing a great job in bringing something new to the horror TV genre.  I’m glad that Antosca has confirmed that Syfy will be doing another creepypasta next season that he will be working on.  Channel Zero will continue on, and I can’t wait to see what eerie imaginings Antosca and others will come up with!