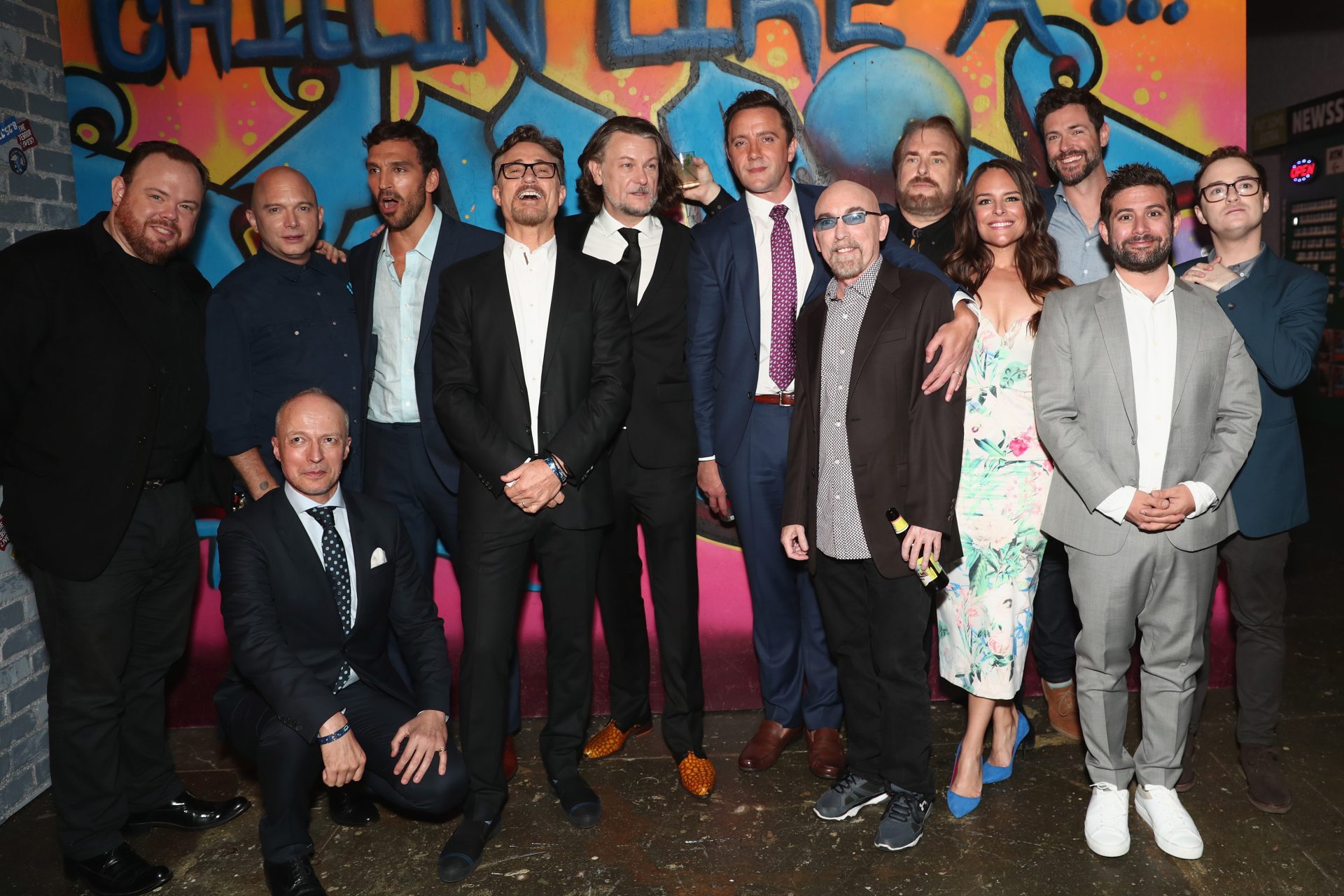 Now that Amazon Studios has dropped the second half of season one of its newest show, The Tick, on its Prime Video service, and you’ve had a whole weekend to catch up, the Nerd Element can finally share its spoiler-iffic interview with creator/writer/executive producer Ben Edlund and executive producer Barry Josephson. Neat!

Speaking by phone from Los Angeles recently, the two gentlemen shared their thoughts about the series as a whole, as well as gave a teaser for the second season, previously greenlit by Amazon on the strength of the first half of the season. The conversation was at turns thoughtful and funny (Edlund especially is known for his off-kilter sense of humor)—and filled with spoilers.

Yes, here’s our mandatory spoiler warning: If you haven’t yet watched the entire season, please go do so and then return to read the following interview. It’s full of SPOILERS. We asked them questions about specific events and character arcs that occur throughout the entire first season. You’ve been warned! SPOILERS! SPOILERS! SPOON! I mean, SPOILERS!

The Nerd Element: What do you want to share with our readers about the second half of the season? What should they look forward to?

Ben Edlund: All the fun sort of interpersonal nonsense and relationships and sort of superhero craziness that we initiated in the first half kind of spirals up into an unchecked crescendo.

The whole season taken in one piece is Arthur’s origin story…. [W]e end the season finding ourselves coming back around in time to the Flag Five memorial that puts us in a position to realize, oh, yeah, this the story of the City, it’s the story of Arthur, it’s the story of Arthur and The Tick and all the characters that have been influenced by their seminal events that you see in the pilot. We promised more of a story than people I think might be expecting.

TNE:  How do you both feel about the way the season played out? One of my favorite things—well, it was pretty much every revelation, especially how Big Bismuth was making Superian sick because it was all over the Tick from the explosion in the first episode. I just wanted to know how you felt about the whole thing.

BE: I felt pretty happy that we were able to do things like that as much as we were able to. My favorite kind of genre of entertainment crackles with coding and Easter eggs and things you didn’t notice the first time around, and structure that pays off. So bits and pieces like that to me are very much—that’s what makes me happy, is when the writers collectively can sit down and make a blueprint that actually pays off on itself.

TNE: How much freedom did Amazon Studios give you to realize your vision for this iteration of the Tick?

Barry Josephson: Complete freedom from the very beginning. [We] went in and pitched a pilot and a season; they really were interested in what Ben was thinking and what he wanted to do and what he wanted to say and what was the meta of the piece, as opposed to nit-picking what a certain episode is about. We had a really great, nice soft landing at Amazon and they’ve been supportive ever since. They leaned in to what Ben was thinking and to that end, we got to basically make two halves of a full season of a full movie, like two separate movies with these characters and grow them and break it out.

Often, you get a note—they like something in an episode and they want you to repeat it. I think Ben wanted to grow the show and do something different and be unpredictable with each episode, and Amazon really leaned into that. So we’ve had just the best working relationship with them and we’re really proud of the show and we’re happy that they let us just basically make the show that Ben had created.

TNE:  Was there anything that you had planned for the show ever that Amazon said, “Well, that’s just a little too absurd?” Or they just let it go?

BJ: I think there were moments where they maybe read an outline or heard a pitch and so on and felt like, “Well, where does that come from?” [Edlund laughs] “How does that happen?” And I think they would always sort of have a question and Ben would have an answer and we would just carry on.

Sometimes you work in a place where they don’t understand something necessarily and it has to go away, and they didn’t do that with us.

It was a strange situation because they were disoriented because we had moved away from a talking volcano. They were like, “I don’t know where I am right now. Where’s the talking volcano?” [laughs] They feel like the anchor’s been pulled because we’re—anyway, they were in a great mindset to play the game with us and to understand the object of the game, which was a rare treat from a network.

TNE: I wanted to ask you a couple of questions about what happens in the series. For instance, the Tick thinks he’s a computer and then he thinks he’s a dog.  Will we ever find out his origins in this series?

BE: That is our intent. This is why he’s sort of on these—he’s on walkabout. It’s like “Are You My Mother?” [Ed.: The children’s book] Maybe his mother is a piece of construction equipment, maybe it’s just a billboard.

I wanted…to take all of the iterations and all of this energy and make some new territory for this character and actually state some things about what its origin is. I think that’s in store for the viewers if they stick with us. I’m really happy that we have a second season and we can keep going and go further into the mystery.

TNE: In this version, the Terror is much more menacing than the previous versions, especially the cartoon, but he still has that whimsical side, such as his demented version of “Whiplash” and his stubborn insistence on sticking to, as Overkill calls them, his stupid plans [Edlund laughs]. Do you think you pushed the character as far as you wanted, or could he be even worse once he escapes in a future season the way the other characters predict?

BE: Oh, I think he’s got more to him. Right now, he’s frozen, so that’s a bit of an inconvenience for him. He, I think, has more of a future in him. Jackie [Early Haley] did such a great job of finding this trickster inside him that is really fun to watch. So of all of the characters, I’d say the Terror is, next to the Tick, the one having the best time. He is the one in touch with his joy, so that’s a nice thing and something we want to revisit at some point, but it’s nice to have him on ice for a while because when he’s up and running, he’s the only thing that Arthur is able to think about. Freezing him—I guess I have to say Spoiler! Spoiler Alert! for folks who have not watched the second half of the first season—oops! But anyway!

BJ: I think also part of the answer to your question is what Ben created for the Terror is also what the actor brought to the part.

BJ: He’s just remarkable, and there are things that he can do that just make it such a pleasure to see play out. He embraced it completely. He really informed the character.

[At this point, we’re informed we have one last question with Edlund and Josephson]

TNE: Well, I’m gonna go with this one then. I loved Ms. Lint. I think she’s a great character and I want to know what the future has in store for her if you can tell us anything about the next season.

BE: Ms. Lint is a part of it! I like her first arc which is basically a somnambulant career woman arc. She wakes up in the middle of a career she wasn’t aware she didn’t want [laughs].

What’s fun is that I consider her to be, in essence, another one of Arthur’s older sisters, a little bit more of a dangerous one. I consider this show to be the depiction of a family living on either side of a line, and Ms. Lint is a part of that family, it’s just she doesn’t know it yet—no one really knows it yet. She’s got a lot more to do for us. So if you like her, then you’ll be pleased as we move forward.

The first season of The Tick is currently available in its entirety on Amazon Prime Video.