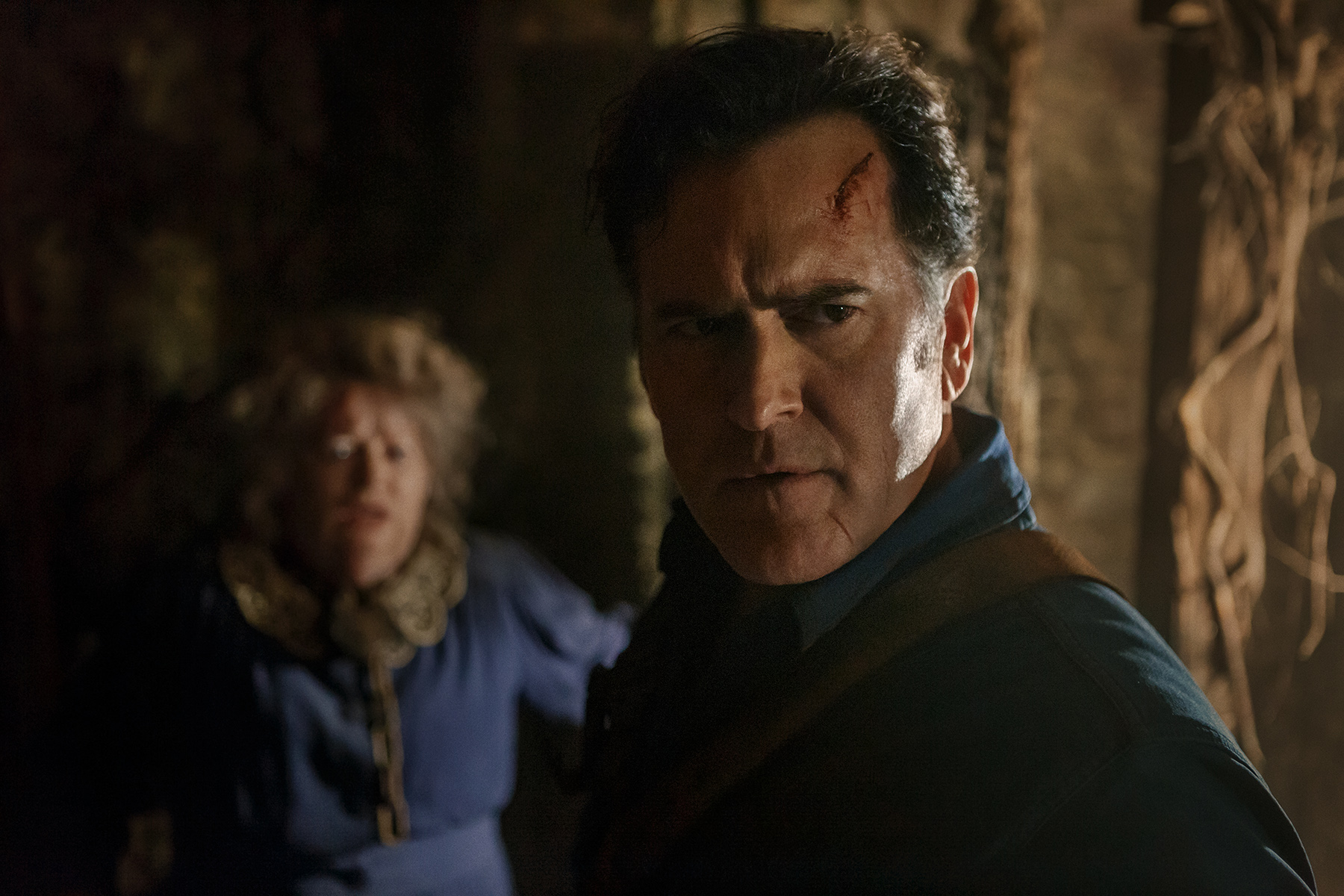 Previously on Ash Vs. Evil Dead: Pablo (Ray Santiago), Kelly (Dana DeLorenzo), and Ruby (Lucy Lawless) arrive at the asylum determined to save Ash (Bruce Campbell) from Baal (Joel Tobeck). In short order, a Deadite-possessed Lacey (Pepi Sonuga) dispatches her dad, Sheriff Emery (Stephen Lovatt), and is in turn dispatched by Kelly. Linda B. (Michelle Hurd) is determined to avenge her daughter (maybe not so much Emery, though). Ash stalks Ruby and Pablo, kidnapping the latter and hanging him up just like in the vision Pablo had earlier this season. Everyone converges on Ash and Pablo, including Baal, whereupon Ash reveals his ruse and the assembled gang holds down Baal while Pablo recites the incantation to destroy the demon. The celebration of Baal’s demise is short-lived, however, as it turns out Baal managed to slice Pablo in half during the fight. Pablo dies, to the shock of Ash, Kelly, Linda, and even Ruby.

I speculated last week as to Ash’s possible reactions to Pablo’s death, including getting wasted, and sure enough, the new episode opens with Ash doing donuts in the Delta, drunk as hell, with Pablo’s corpse duct-taped together in the passenger seat, all to the tune of Cutting Crew’s “(I Just) Died In Your Arms.” It’s a boffo opening—the kind Ash Vs. Evil Dead is exceptionally good at—immediately throwing us into Ash’s pain over the death of his little Mexican (Honduran!) buddy.

Rick Jacobson, who directed the first episode of the season, “Home,” returns to helm “Home Again,” as Ash re-returns to the cabin in the woods where his life was turned into a never-ending hell. Ok, it wasn’t all hell, given all the babes we’ve seen him pull, but, you know, Deadites and possessed Delta and lots of death. The script by newcomers-to-the-series Jennifer Ames & Steve Turner wastes no time in getting to the crux of Ash’s latest plan: traveling back in time to destroy the Necronomicon. Jacobson, Ames, and Turner give us great Deadite force point-of-view shots, as well as scenes that directly echo Evil Dead and Evil Dead II, as well as references to Army of Darkness! To say I was giddy watching this ep, despite Pablo’s current condition, is an understatement—I was fangirly-ing ecstatic.

Back to the details: While drunken Ash wallows in booze, self-pity, angel dust-laced weed, and car donuts, Ruby and Kelly watch from the porch of Brock’s house, each processing their own reactions to Pablo’s death. Ruby of course thinks Pablo did the right thing, but Kelly’s not having any of it. She is convinced Pablo didn’t need to be sacrificed to rid the world of Baal.

A grief-stricken, booze-soaked Ash wishes he could go back in time and prevent Pablo from dying. Pablo reanimates and tells him to go for it. Ash figures why not; after all, he did go back to the middle ages. Pablo goes back to being dead and a slightly spooked Ash tosses away his joint.

Ash makes Kelly and Ruby get in the car, demanding that Ruby read the spell that will send them all back in time. Ash yells, “Yes, I’m upset! Yes, I’m behind the wheel! Yes, I’m drunk, and maybe my license isn’t the fancy kind from the DMV, but at least I’m drunk!” Ash threatens Ruby—either she reads the spell or he’ll crash the car and kill them all. “Just do what he says—he’s thinking less than usual!” Kelly pleads. Ruby recites the incantation. Ash yells that he’s going to fix everything and then come back for Linda. The town drunk (Stephen Ure) is right in the path of the oncoming car with a “PLEASE HELP!!!” sign next to him. His eyes bug out, and…blood splatter into title!

Ash, Kelly, Ruby, and both of Pablo’s halves wind up back in the ’80s in Elk Grove,1982 to be precise like Ash (and like, duh!). Ruby tries to explain time travel to Kelly, mentioning “a primary present view which remains constant” even though there are “infinite timelines,” but Ash gets impatient and cuts her off. He wants to go see his dad, but Ruby says it will cause timeline problems. Drunken Ash gets excited that he knows sports scores for the next 30 years and wants to make bank, but the more level-headed (and sober) Ruby quashes all Ash’s enthusiasm. The town drunk is not yet a drunk, appearing in a suit and holding a briefcase. Ever sensitive, Ash gives him a bottle of alcohol and says his life will be exactly the same. “Don’t Stop Believin’” by Journey plays as the drunk guzzles even though he has a family history of alcoholism, as he tried to tell Ash, who of course didn’t listen or care. Now we know why the drunk said Ash ruined his life.

After arriving at the cabin, Ash suits up and stores Pablo in the Delta’s trunk with a letter that says Pablo was dead, but now he’s not. Ruby is happy they defeated Baal as we see the Deadite force point-of-view coming toward them. Ash realizes what’s happening and is actually concerned because at this point in the timeline, he hadn’t been to the cabin yet. The Deadite force comes barreling at Ash, who rolls down a hill, then runs to the cabin. Jacobson here echoes the original films, as the force can’t find Ash in the cabin, gets confused, and retreats. Turns out Ash is Spider-manning on the ceiling. “Haha, still got it!” Ash says before falling unceremoniously onto the floor.

Ash looks for the Book and sees a picture of Annie Knowby. He hears noise in the cellar, stepping on a nail as he walks toward it, then decides to come back to the cellar last. Meanwhile, Ruby and Kelly are lost. Kelly comments on Ruby’s language skills, noting her English isn’t great yet she speaks “Sumerian or she-devil or whatever.” Something runs behind them.

Ash’s leg is getting possessed but he can’t bring himself to chainsaw it off like he did with his hand; he stabs himself with scissors instead and sucks out the black blood, which he deems “too salty.” In a scene combining similar ones in Evil Dead II and Army of Darkness, something inside Ash cackles and starts throwing him around the kitchen. Campbell shows impressive physicality throughout as Ash flops around, then in short order does the “cinnamon challenge” and drinks hot sauce and boiling water trying to kill whatever’s inside him. Sadly, it’s not a bunch of tiny Ashes, but a tiny, hairless, multi-eyed rat thing that comes out and says, “Fuck you, Ash! Fuck you, fuck you, motherfucker!” Ash smashes it into a fine goo with a frying pan. Someone calls from the cellar saying she’s trapped. Ash wisely puts on the chainsaw, downs a Shemp’s beer, and goes into the cellar.

Ruby tells Kelly she can stop following Ash once the Book is destroyed, but Kelly says she’s already forging her own path. Kelly knows something is following them, but it doesn’t show itself.

Back in the cellar, Ash hears someone crying and asking for help. It’s Henrietta Knowby (Alison Quigan)! She’s chained up and looking normal. She says the Book has changed her husband and begs to be let go. Ash slaps her repeatedly trying to get the Deadite to show itself, but Henrietta remains human. They hear Prof. Knowby (Nicholas Hope) return to the cabin with a student; Henrietta says he will torture the student the way he tortured her. Prof. Knowby pulls out the Necronomicon; he wants help translating it.

Ash takes the key to the locks on Henrietta’s chains, but Prof. Knowby comes downstairs with the student, Tanya (Sara West). He tells her she’s there for an important task. Henrietta shows herself, frightening Tanya, who steps into a bear trap. Ash sympathetically says, “Jesus! You were right. Guy’s a dick.” Henrietta says he has to let her go help the student; Ash considers it. Prof. Knowby tells a distraught Tanya that the Book took him over. As Ash frees Henrietta, Prof. Knowby tells Tanya his wife is possessed. Uh-oh, Ash. Outside, Ruby feels the Book being opened; she and Kelly are attacked by a tree with tendrils and a huge eye.

Tanya begs for help, and Ash tries to free her. Outside, Ruby tries to save Kelly from begin dragged under the demon tree. As she’s on the verge of disappearing, Kelly tells Ruby to stab the tree in the eye; Ruby does and the two women are released.

In the cellar, Henrietta gets bigger and grosser as Ash tries to free Tanya; however, Ash’s hand gets stuck in the trap as Henrietta pulls on him. He tries to gore Henrietta with the chainsaw, but it doesn’t work! Prof. “Guy’s a dick” Knowby locks them all in the cellar. Ash yells for him to come back, to no avail. Henrietta converges on Ash and Tanya, saying in a very disturbing and menacing manner, “You’re both dirty birds and I’m gonna hurt you real, real bad.” Gulp! Credits! Cue “Physical” by Olivia Newton-John. Double gulp (and not the kind that will give you diabetes)!

Campbell had hinted there would be time travel in this season, and again, Ash Vs. Evil Dead delivers the goods in a big way. As usual, things are screwed up as Ash goes back to the wrong point in time. On the other hand, we finally get to see what happened in that cabin before Ash, Linda, Scotty, Shelly, and Cheryl came a-camping. Previously, I felt sorry for all the Knowbys—and I still might have sympathy for Prof. Knowby, depending on what we see of him in the season finale—but right now, Prof. Knowby is a monster, even if his monstrosity is a result of translating the Necronomicon and now having to figure out how to save his wife from eternal Deadite-ism. He’s a total dick for grabbing an innocent student to try to get her possessed instead of his wife. When Ash is right, Ash is right!

What horrors does Henrietta have in store for our hero and the innocent Tanya? Will Kelly and Ruby arrive in time to help them out? What will happen if, say, present-day Ash kills Henrietta before his past self gets the chance? He seems to be stomping all over the timeline in his usual “think never” manner. And what will happen if Ruby and Prof. Knowby meet? Will he recognize her as Ruby Knowby—if that’s who she really is? Stay tuned!

Ash’s little “Whoops!” in the middle of his ranting (he has enough awareness, even in grief, that he put the joint in his mouth backwards)

“Oh, man, you can really taste the angel dust!”

“My evil mistress in the woods, this is gonna be our last tango!” If only, Ash (but there’s a third season coming)!

Henrietta: “I’m gonna stomp you a new mudhole to suck out your soul!”
Ash: “I should have slapped you harder!”

Henrietta: “That chin of yours is an easy target!”

“All photos courtesy of Starz”

TVTalk with The Nerd Element Ep 140: Ghost Riders and WereWolves