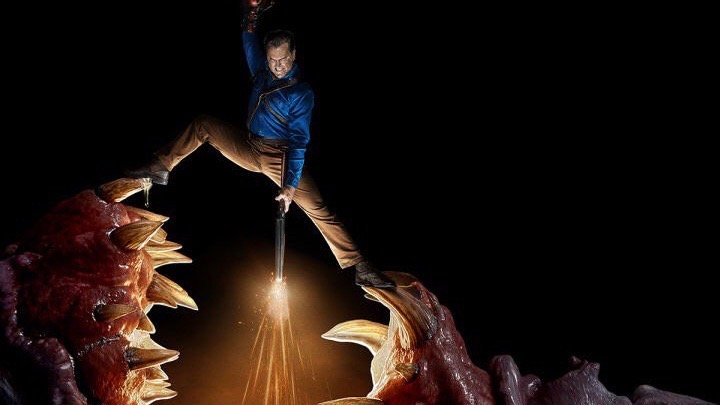 It’s been a long time since we laid eyes on Ash and the Ghostbeaters—since December 11, 2016, in fact. In the meantime, showrunner Craig DiGregorio left due to a conflict with executive producer Rob Tapert, and the show, which had before premiered near Halloween, was pushed out to February 25, 2018, a long time for fans to wait. But it’s back and so are our reviewcaps. Let’s dive in, shall we?

Previously on Ash Vs. Evil Dead: Ash (Bruce Campbell) traveled back in time to defeat the Deadite evil once and for all, and to save Pablo’s (Ray Santiago) life.  The Necronomicon was sent back to hell, Pablo came back to life, and the Ghostbeaters—Ash, Pablo, Kelly (Dana DeLorenzo), and newest member Linda B. (Michelle Hurd)—were feted by Elk Grove for their feats of derring-do. It all seems too good to be true, and it is, as we see a blonde Ruby (Lucy Lawless) lurking in the crowd. In a stinger scene after the main episode ends, a young woman finds the Necronomicon in the woods. Dun-dun-dun!!

The Season 3 premiere episode, “Family,” wastes no time setting up the arc for the season. Written by the new showrunner, Mark Verheiden, and directed by Mark Beesley, the tone for the whole season is encapsulated in that one word: family. Who is Ash’s family? Does he have room in his life for more than just the Ghostbeaters and Linda B. (and the chainsaw and the boomstick)?

The show starts with Ash narrating a quick montage of the past two seasons as he begins, “Do you believe in the existence of evil?” Ash talks about reading from the book and going to back Elk Grove, his hometown, to confront the past. After thirty years as the town pariah, Ash is now its hero.

As mentioned above, we last saw our Ash family being hailed as the conquerors of evil. So it’s appropriate that the first image after the montage is Ash, standing in the dark with fiery embers flying around him. “You know me as Ash Williams, a hero,” he begins solemnly. But this is Ash; we know the seriousness won’t last, and sure enough, the boom is lowered. Well, the boom mic, as Ash announces he now uses his chainsaw “to slash prices!” It’s a commercial for the hardware store Ash has now taken over since the death of his father, Brock. It’s also cheesy as all get-out, with jiggling paint cans, wiggling Ash pelvis, boom mics in the frame, and…dildos. This commercial is the best!

Yes, Ash has turned Brock’s store into a “hardware store/sex toy emporium.” Lots of townspeople are waiting for the grand opening of Ashy Slashy’s, and Pablo is running a food cart outside. It’s not quite the S-Mart, but it will do. Once open, we see Ash in his element. A TV in the background is showing “Treasures From The Loft,” as Ash has paid for ads on the show. Ash, not paying attention, doesn’t notice when the woman who found the Necronomicon last season presents it to the show’s host. Kelly, who is working at a bar, sees the book on the bar’s TV and immediately calls an unknown someone to say that “evil is coming back.”

As we’d expect, the Loft host is geeked to have the Book of the Dead in his hands and starts reading from it. D’OH! The Deadite Evil heads through the woods to the barn where the show is being filmed and BAM! shows up and starts killing people. The TV screen changes to a note about “technical difficulties.” Outside the hardware store, Pablo starts feeling sick. He lurches inside, pulls up his shirt, and sees that the text of the Necronomicon is back on his body.

Meanwhile, Blonde Ruby, who we learn is also known as Demon Woman of Fire and Fierce Mother from Hell (and possibly Breaker of Chains and Mother of Dragons, ha), shows up to take the book. When the show’s host resists, she makes his head explode. Opening Credits!

Two girls, Rachel (Ellie Gall) and Brandy (Arielle Carver-O’Neill), at the local high school are scrubbing graffiti off the lockers they defiled. Rachel has multi-colored hair and is kind of a badass. She must be Ash’s, right? Brandy just wants to get out of there. Rachel says it could be worse while Brandy lights a joint. It’s quickly worse, as the Deadite Evil shows up at the door.

Cougie, the school’s cougar mascot, stands at the end of the hallway looking menacing. He doesn’t respond to the girls when they call after him. Suddenly, the lights go out; the girls hear growling as Cougie pops up closer to them as the lights come back on. His eyes and mouth bleed black, and the blood spreads toward Rachel and Brandy. The lockers also bleed. The blood surrounds them and they slip in it trying to escape.

Ash meanwhile is drinking with his friends outside the store. A woman (Katrina Hobbs) there gets a call from a crying girl. She confronts Ash, but he doesn’t remember her. She says she’s his wife and they need to talk. A stranger watches them. The woman tells Ash a monster is attacking their daughter. He doesn’t recall her at all, so she throws one of his lines back at him: “Good sex is 30 seconds followed by a cheeseburger.” Pablo says she’s telling the truth about the monsters because the Sumerian characters are back on his stomach.

The three climb in the Delta 88 and head to the school; mystery guy follows on a motorcycle. The woman says her name is Candace Barr; they met in Branson when Ash had mutton chops and a big porn-stasche. They had a lot of sex and got hitched. Ash remembers “Candy Barr!” but he doesn’t believe the daughter is his because he was wearing his lucky rubber “and that sucker went 50 and 0.”

Blonde Ruby has the book at her hotel room. She fondles it, then turns to the page showing Ash in medieval times, his boomstick held aloft. Blonde Ruby stabs her hand and squeezes blood on the picture while reciting an incantation, then licks the blood off her hands while gagging.  Something starts writhing in her belly. Here were go again with Ruby’s children, maybe?

As they walk the halls of Ash’s old high school, he reminisces, telling them he met his first Linda there. Ash goes into the trophy case to find a joint of Maui Wowie he stashed long ago.  Candace calls out for Brandy, their daughter. They find the girls hiding in the music room. Candace tells Brandy Ash is her dad, and he gloats yes, he’s “the ol’ sperm shooter.” Ash adds, “You can call me dad unless you’re a Deadite, then you can go fuck yourself.” Great way to meet your daughter for the first time, Ash!

A now possessed Rachel begins playing a familiar tune on the piano (well, familiar if you’re an Evil Dead fan). Ash gets the boomstick out, and Pablo has an ax. Rachel disappears as the bloody piano keeps playing. The drums play themselves, too, after Rachel uses them, a mirror of the scene in Evil Dead 2 when the cabin comes alive. Rachel uses the tuba to blast our gang all over, then the instruments begin attacking them while playing music. A pair of drumsticks beat on Ash’s head, then stick him in his eye, ear, and nose. Rachel sends a cymbal flying at Brandy, but Pablo pushes her out of the way. The cymbal decapitates Candace, who was standing behind her daughter; Brandy is traumatized and Ash is pissed. Rachel returns to normal briefly as she’s playing the harp, but Ash knows better and knocks it on top of her. Deadite Rachel threatens him again, so he jumps on the harp and slices her head into pieces as she cries out for Brandy in Rachel’s normal voice in quite possibly the grimmest death yet. And grossest. Yes, I remember the whole “up the butt” thing, but this…eww!

Before anyone can really process what just happened, Cougie attacks, grabbing Ash and squeezing hard. Pablo buries his ax in Cougie’s back, but Cougie throws him across the hallway. Cougie’s mouth is huge and gross and filled with nasty, sharp, pointy teeth now, too. Just then, Kelly shows up and blows Cougie’s head off. She’s accompanied by the stranger who’d been lurking earlier, and Ash and Pablo are happy to see her. She introduces her new friend as Dalton (Lindsay Farris), who’s with the Knights of Sumeria and who bows down to “the Prophesied One.” I’m guessing someone that goofy is not long for Ash’s world.

Ash tries to reach out to Brandy, but he keeps messing up her name. She corrects him, saying that it’s “Brandy—and fuck you!” She’s his daughter, all right! Ash gets the gang together to go fight Deadites and to protect his daughter at all costs. Ash pulls out his old joint and smokes it, then offers it to his daughter, “Sandy.” End credits!

After over year waiting for the show, it feels good to have it back, even if the energy of the episode felt a little off. Part of that has to do with having read about the behind-the-scenes drama with diGregorio, and a smidgen of trepidation for where Verheiden will take the adventures of Ash and the Ghostbeaters this season, but mostly because the show’s been on the bubble since the end of the second season, with no word from Starz on the prospects for a season four.

The other part was wanting to know that crazy Season 2 finale meant. While we did get a few answers—the girl who found the book shows up right away and Pablo recalls being dead—other questions remain. For instance, what is Blonde Ruby up to this time? Has she been reset to her past Baal-loving ways (meaning we’re getting lots of creepy children coming)? Does she have any memory of turning away from her all-out evil and taking a bit of a shine to Ash and especially her mother-daughter relationship with Kelly? And where in the hell is Linda B.??

Yes, I know, I need to let the show unfold and tell its story, but I really want to know what happened to Linda B., who we last saw being kissed by Ash. Even a passing conversation about her whereabouts would help.

On the plus side, Ash’s daughter, Brandy, already has some of his traits, and hopefully will turn out to be as big a badass as Kelly. Carver-O’Neill fits right in with the cast, too. I’m curious to see how quickly Dalton gets dispatched, as his brand of Ash-worship hasn’t really worked for anyone in the past (Pablo’s worship is totally different), and I’m looking forward to see what exactly was writhing inside our favorite icy blonde. Maybe it’s a dragon? It could be a dragon. As always, stay tuned and keep watching the show on Starz! And feel free to join the campaign to bring the show back for Season 4 by spreading “#bringbackboomstick” far and wide.

“What’s better than a handful of my nuts? A long screw—whoa!”

“For that special someone, we’ve got everything from D to Ildo”

Really, that whole commercial was golden.

Ash finally remembering Candace because she went by “Candy Barr,” plus that whole montage of him in mutton chops having what looked like some seriously drunken and terrible sex with Candace.

Pablo: “Ghostbeaters are back!”
Ash: “Fuckin’ A right we are!”

Interesting tidbits from the “after show” piece I saw on Starz after the episode ended: