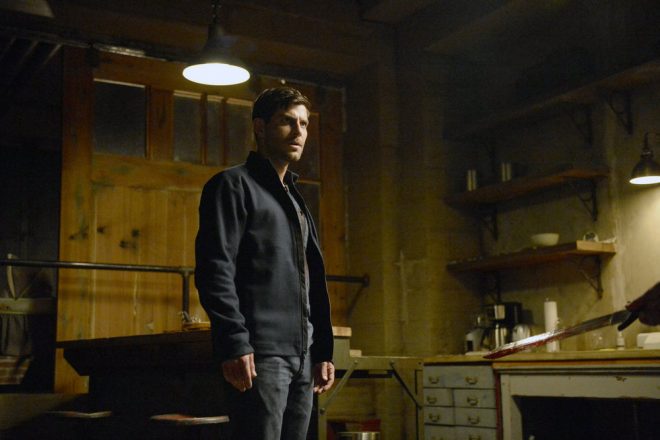 One of my favorite shows has finally come back for its last premiere.  That makes me sad because come next fall my Fridays will be Grimm without it.   That may have been cheesy but darn it I’m going to miss this show! This was a great start to what will hopefully be a wonderful swan song.

We pick up where we left off from the season finale.  A part of me was hoping that Nick Burkhardt (David Guintoli) and Captain soon to be mayor Sean Renard (Sasha Roiz) would kiss and make up.  Alas, not happening.

At least Nick is alive for the time being. Renard though wastes no time in pinning the wipe out of the North precinct on the Grimm.  With the weight of the law behind him, Renard puts an APB out on Nick including a “shoot to kill” order if he resists.  Hank (Russell Hornsby) and Wu (Reggie Lee) keep tabs of the search from the precinct, updating Nick when they can.  Renard does threaten them though to not get in his way.  Hank is like…

Monroe (Silas Weir Mitchell), and Rosalie (Bree Turner)’s house and spice shop get searched but thankfully nothing suspicious is found. Good job on clearing those dead bodies. Nick also cleared his place of dead bodies by using the tunnels with the help of Hank and Wu.

Adalind (Claire Coffee) is reassured that her man Nick is among the living (gag).  Sean and Adalind figure out that Diana (Hannah R Loyd) killed Conrad Bonaparte (Shaun Toub) by using daddy.  Diana confirms it when Adalind asks her.  When Black Claw calls, Renard updates them on the setback and blames Nick for Bonaparte’s death as well.

As the search for Nick continues, Renard is starting to get visions of blood on his hands and voices in his head telling him he’s picked the wrong side.  Who knows what that’s about! Meanwhile Hank and Wu get a case.  Coincidentally, it’s Rachel Wood (Anne Leighton), Renard’s lover and campaign manager, found suffocated in her bed sheets. The CSI found Renard’s prints everywhere. Even though we know Diana did it, Wu and Hank are already trying to build a case against Renard.

Eve/Juliette (Bitsie Tulloch) may be healed but the stick may have done something else to her.  Eve asks about how she was healed so Nick and co tell her about the stick.  She couldn’t completely woge earlier while hiding in the tunnel so admits to them that she feels different. She goes to the spice shop to help get rid of the bodies Trubel (Jacqueline Troboni) killed.  However she gets into a death grip with one of those bodies and Rosalie has to chop the man’s hand off for him to let go.  During the death grip the guy had different symbols on his head and they were in this dimension tornado where there’s black abyss below.  She goes back to Nick’s place with Trubel to get the cloth that came with the stick and sees the symbols again.  The only thing with that is Trubel can’t see them.   Trubel’s theory though is that the stick may have cleansed Eve’s soul at the same time it healed her.  What does that mean for Nick I wonder? The stick saved him from deadly gunshot wounds so will he be able to also see the symbols? If that’s the case Monroe could too.

There aren’t that many places for Nick to hide, so he goes to my favorite Eisbiber, Bud Wursner (Danny Bruno) for help!  The gang meets at Bud’s refrigerator repair shop for a pow wow to decide their next steps.  Nick has to get out of town.  Unfortunately Renard finds out about Bud’s shop and gets SWAT there.   Eve has issues again woging so there is no time for their escape plan using Bud as a diversion.  The episode ends with Renard telling SWAT to storm in!

I felt like I just saw another finale at the end there! Director Aaron Lipstadt and writers Jim Kouf, David Greenwalt, and Steven Carpenter did a great job creating an urgent tension in this episode.  Renard always had this ruthless quality to him and it showed in abundance this episode. I’m not surprised that even though he is starting to get second thoughts, he is set on this course.  Something drastic must happen before he changes his mind.  It will be interesting to see how far his “visions” will go. Could someone be haunting him? Maybe a former friend mayhaps?

Nick has gotten away with a lot over the years as a cop, in part because Renard helped cover it up.  That luck had to run out some time.  The fact that no bodies and weapons have been recovered so far works in Nick’s favor, but he could still go down for the two officers that were found dead at the precinct.  There is only circumstantial evidence (if that) and the word of Renard. He only came in right after the policemen were already killed.  Nick could have just found the bodies. That doesn’t explain though the attack at the North precinct though….

Give it up to Sgt Franco (Robert Blanche) please! He was willing to give Nick the benefit of the doubt and noticed Renard’s becoming slightly unhinged.  He’s like the new Wu .  Just right outside the inner circle.  He even confirmed to Wu that he was at Bud’s shop.  Speaking of Bud, I’m so glad to see him again! I wondered when he would be brought into the loop! He did not disappoint with his reaction! Despite the urgency of the moment, I chuckled when Eve had to point out to Bud that he would be the distraction.  I’m so proud of how Bud has grown over the seasons.  Awkwardness aside, he is still brave when he needs to be.

I’m looking forward to them exploring what the stick does. It’s a good thing Renard knows NOTHING about it! How long is that going to last though? I was surprised how fast the police figured out about Bud.  It just goes to show you how much Renard and Nick’s lives were intertwined over the seasons.  They now share a kid with Adalind, one is a Wesen and the other a Grimm, and a captain and a cop that’s worked in the same precinct for several years.

It sucks that the Portland division of Hadrian’s Wall (HW) has been destroyed.  While Black Claw has also taken a hit, it will probably recover faster.  Trubel and Eve could help rebuild HW but first Eve needs to figure out what’s going on with her.  The best “weapon” the Grimm gang has is on the frits! Is Juliette in there somewhere though? Could she come back? I like Eve better than Juliette.  As much as I hated that Juliette destroyed the trailer, with Nick on the run Renard can’t put a BOLO on it nor will there be any potential evidence with the weapons.  Also the information about Wesen does not need to be police custody.

Who can put Diana in her place? Her body count is rising and she’s not even what, 8? I guess when both of your parents are both a zauer and hexenbiest you are born powerful. It doesn’t help that discipline wasn’t introduced early.  I blame Nick, the Grimm gang, and Renard because of the decision to send her away from Adalind.  I think if Adalind’s mom was still alive, she would’ve had Diana in line after being reunited.  Diana is the perfect example of why discipline is important. And by discipline I mean old school tactics. The only good thing that has come from Diana killing is that Bonaparte and the King are dead. Adalind needs to get that ring off her finger where Bonaparte put a spell on it.  Put your hexenbiest thinking cap on girl!  A part of me wishes Bonaparte wreaked more havoc, he was a good villain.

I am not surprised that Monroe and Rosalie decided not to tell anyone else about the pregnancy yet.  Portland is becoming dangerous Monroe, your obligation is Rosalie and that baby.  Move if you must man. With everything that’s going on with Nick, it is not a good time, even if it is happy news. Some couples wait before announcing a pregnancy all the time.  I wouldn’t mind seeing Monroe’s parent’s reaction though to the news! I hope if we do get a fast forward in the series finale, we get to see the baby! Welp, they will get a good start in babysitting Diana next week!

What did you think of the episode? Is there a chance for Renard to change? Will Nick manage to get away from Renard? Will Hank and Wu come to the rescue by making Renard a suspect of Rachel’s murder? Sound off in the comments!