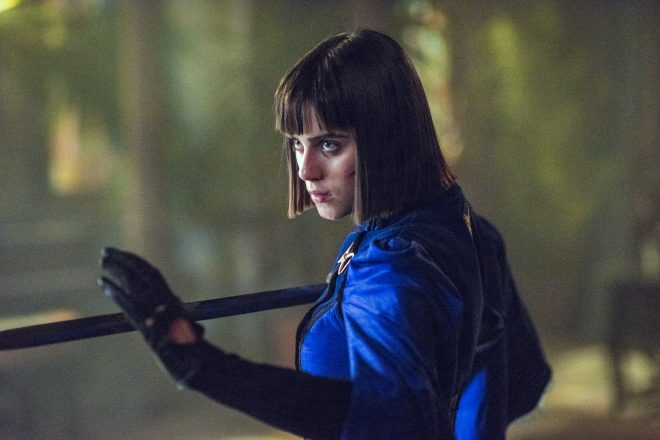 This week’s penultimate episode of Into the Badlands had reunions, broken alliances, bombs, and fights.  A nightingale (potentially) sang one last time! *Sniff* Since I didn’t hear a neck crack, I’m holding out hope darn it!

One theory has been solved.  Minerva (Emily Beecham) is Bajie’s (Nick Frost) Flea! We see a flashback from 20 years ago when Minerva first arrived at the monastery.  That darn book was with her even then.  Her father gave it to her and taught her one word: Azra. Bajie kept it a secret between them.  It was cute seeing how Minerva had a preference to two swords and a dagger clip with the butterfly icon when she was a kid.

I thought Jesse Jane McParland, the girl that played young Widow was adorable!  I thought it was extra cheesy though when she first posed after her eyes turned black.  It already looked weird when the abbots did it but it’s extra when someone smaller does it.  The brief fight choreography against Bajie included some of Minerva’s signature moves which I thought was interesting. More flashbacks please!

Throughout the episode, I realized similarities between MK (Aramis Knight) and The Widow.  Here is a brief list of observances:

For once I agree with MK not wanting his powers back now that they are gone.  It’s an understandable reaction considering the pain it has caused into his life.  The difference between MK and the Widow is their stance regarding the “dark power.” The Widow’s motivation in getting her powers back appears to be for the right reasons. She wants to rid the badlands of the current oppressive system.  By doing so less butterflies need to be in battle.  However, there is a downside to using those powers as both her and MK have experienced.  Innocents can still get in the crossfire.  Is the Widow equipped to handle the burden of her powers if returned?  She’s no longer a child but that doesn’t mean she won’t make the same mistakes.

Her thirst for the power is now causing her to lose focus again on her main goal.  It is also affecting her relationship with Tilda (Ally Ioannides), one of the few people that stood by her from day one.  From what Tilda saw and what both Veil (Madeleine Mantock) and Odessa (Madison Jaizani) have mentioned about The Widow, it was a matter of time before that confrontation happened.

One of the few funny moments of this episode was when Bajie talked his way into the Widow’s compound.  He kept to the truth (mostly) and even embellished when the guards were not immediately buying into his BS.  I’m surprised though that a guard didn’t escort him further into the compound.  What kind of security is The Widow running?  She has some handsome ones in her ranks though!

MK (Aramis Knight) and Tilda’s conversation is now bittersweet.  Awww, MK looks like he’s going to church all dapper looking! It was cute when he thought Tilda was waiting for him to come back so they could resume their budding romance.  He looked crestfallen when she told him about Odessa.  I had to roll my eyes at MK though when he suggested Tilda go with him to find Azra.  He obviously doesn’t remember what happened to Ava, the last girl that went with him somewhere.   In hindsight, Tilda probably would’ve been better off with MK.

I feel like Odessa almost ruined a friendship between MK and Tilda by telling her about what happened in the boat.  She was there when MK killed all the cogs on the ship.  While an understandable trauma, I’m surprised Tilda didn’t defend MK more, considering he briefly controlled it around her and saved her life with it.  Then she gets awkward when he says hi through a window later.  Ugh.

Odessa makes matters worse for MK and Bajie when she tells The Widow what she overheard.  Pretty much it was them trying to steal the book and dipping to meet Sunny at the old fort.  My guess is she didn’t understand what The Widow being Flea meant.  This seemed to be the opposite of her best interests considering she didn’t want Tilda around MK period.  Why not let them leave? Was she thinking the Widow would kill him? She’s barking up the wrong tree then.  What is miss “I’ll stay for you” Odessa going to do now that Tilda is out of commission? Still don’t trust her.

I enjoyed the reunion, brief as it was, between Bajie and “Flea”.  Other than confirming who she was, what was Bajie’s endgame with Minerva before Sunny told him to get MK?  Did he just want to make sure she was okay?  I wonder how far he will get in interpreting the book?

Sunny and Waldo (Stephen Lang) reuniting also made me happy. Stubborn Sunny still doesn’t want to listen to Waldo’s advice on keeping his emotions out of the fight to come.  At least he knows to watch his back with the Widow.  It was sweet of Waldo to give Sunny access to his weapons stash.

Quinn (Marton Csokas) is even more crazy now that Sunny is on his way.  He bribes Gabriel (John Bell) with ice cream so the boy can die for him.  Gabriel goes to the sanctuary like a refugee, kills a sista butterfly, tells Sunny about Veil getting married and that The Widow traded her for the now dead alliance with Quinn.  The Widow hits him with a butterfly star, but not a death blow.  Gabriel detonates himself causing major destruction to the sanctuary.  The Widow scratches Sunny with a butterfly star, causing him to run away.  Thanks to Bajie, who happened upon Sunny caught by The Widow’s men, he escapes Minerva’s sanctuary. Sunny tasks the man to get MK and meet him at the fort. Bajie finds MK among the chaos to deliver Sunny’s message, with Odessa eavesdropping.

For some reason the scene between Gabriel and the Widow felt off.  First I was surprised the butterfly that Gabriel held hostage didn’t attempt an escape.  I would think The Widow and Tilda would’ve taught the butterflies how to escape an opponent in that exact scenario.  If she felt the bombs inside his jacket, why didn’t she warn anyone that he had a bomb?  I may be analyzing it too much, but I hate seeing any POC character, no matter how small, die a potentially preventable death.

Why didn’t the Widow or anyone with a crossbow, take him out immediately?  My guess is The Widow wanted to deescalate the situation first.  Did anyone notice how Gabriel grabbed those pieces of bread? He probably ate that bread with gusto before completing his mission.  He got free food out of it at least.  This brings another point about the security at the Widow’s compound.  The Widow should have known that clipper or refugee would infiltrate her place.

Sunny was in denial after hearing that his woman is now Quinn’s wife.  If that was the only news Gabriel told, Sunny would’ve killed him.  Sunny was already out for blood, now he probably wants to torture Quinn.

At the madman’s bunker, Veil acts cold towards her new husband, even slapping him. Veil, sweetie, why did you slap the man when he is holding Henry? She expected Quinn to give the baby back after that. Seriously? You don’t trash-talk until Sunny is there and Quinn is at his mercy, not before! Thank goodness Lydia was there to calm his butt down! Henry would’ve starved otherwise.  It also would’ve been harder for Veil to attempt escape again without her baby.

Lydia was already suspicious about Quinn locking things down in the bunker.  Now she knows he wants to blow it up to prevent Sunny from getting his family.  Now what?

I have to give it to Quinn though. He’s like crazy smart.  Knowing that Veil wanted to kill him wasn’t too much of a stretch but at least he wasn’t ignorant about it.  Quinn wants to set a trap for Sunny but is it going to work?

With the sanctuary in shambles, Bajie and MK trying to steal from her, the alliance between Quinn and Sunny now kaput, no wonder The Widow was in a mood.  It didn’t help that Tilda argued with her before getting MK away from Baron Chau’s (Eleanor Matsurra) men.  I was rooting for you Minerva! Veil should’ve been wrong about you! Tilda had a right to question the decision to trade Veil for an alliance with Quinn.  She got some good zingers in that argument.  Who wants to be compared to psycho Quinn? But in this case, it was true, sort of.

What gave Minvera the idea that Tilda wasn’t looking for Sunny? She wanted to fight, and was surprised that Tilda was talking back.  The Widow was like that parent who thought their kid wouldn’t argue with them. Minerva then acted like the parent that warns their kids before getting smacked or whooped for talking back.

Tilda and The Widow eventually came to blows.  That was hard to watch but at the same time gorgeous.  The choreography was clever in showing us how much Tilda has learned.  Even though the Widow had the upper hand, Tilda managed to get a few good hits.  I wanted to cry when Tilda yelled at Minerva to “kill her.” It reminded me of what Tilda told Odessa about wanting to die before the Widow saved her. I’m praying that the Widow just knocked Tilda out and not followed through with killing her.

This episode gave me all kinds of feelings, especially as things are winding down for the finale.  Quinn vs. Sunny, let’s do this!  Of course I want to say this to Sunny…

Who thinks the Widow’s days are numbered? How will she recover from this serious setback?  Will Quinn succeed in killing Sunny? We will find out in the finale! Sound off below in the comments!