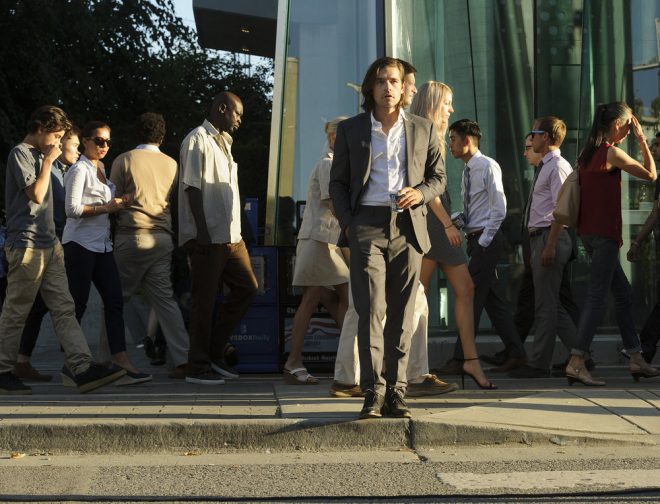 Fen (Brittany Curran) announces using a cute bunny that she is pregnant!  Eliot’s reaction, stark terror of course.  Add insult to injury someone tries to strangle the High King.  Like a good bestie, Margo (Summer Bishil) is there to shut that down! The attempted assassin, named Bayler (Rhys Ward), is part of a rebel group called the FU (Fillorians United) fighters.  Eliot decides to keep him alive despite the advice of Margo and the other Council.   He may regret that decision because Bayler reveals when Fen visits him that they had a thing and as part of the rebellion she could unravel Eliot’s rule from within.  Sneaky minx! For right now she refuses to take Baylor’s bait.

Penny now is unable to do any magic with his hands.  Dean Fogg (Richard Worth) suggests going to Professor Mayakavsky (Brian F. O’Byrne) for assistance or going to a non-magical job like Quentin.  Penny goes with option A.  Mayakavsky cautiously says he can help Penny but first has him do some menial tasks like unknot rope and saw off a table using a filer.  The point is to store magical energy to use on a rainy day, especially since magic is dying.  After getting drunk he tells Penny about his affair with Emily Greensheet (Abby Miller), the student who Alice’s brother tried to help and turned into a niffin for his efforts.  He can’t leave Brakebills South because of an Incorporated Bond, which is very difficult to break.  The following day Penny is assigned to go back to Fillory to obtain a specific moss to help with the professor’s project.

Julia is pregnant! With a quickness she wants an abortion.  Kady (Jade Tailor) suggests getting a normal abortion while it is still early.  After pleading Julia gets Dr Higgins (Michelle Harrison) to move the timetable up to the next day.  When she gets there the baby sabotages the proceedings, first by having the receptionist delete the appointment from the system, then having the doctor killed by having her stab herself in the eye.  Thank goodness Kady’s there to give support!  They are going to have to find another way of getting rid of the baby.  This means that Julia’s fears that the little one will be different because of the daddy are understandable.

Quentin is working at a job where people apparently masturbate with some regularity.  Q struggles to send an email to Alice’s parents explaining her death throughout the day.  He sees Emily working at the same place. She initially gets salty when Quentin uses magic to help clear a stain but apologizes later.  She suggests having a “cheat day” where they use magic and then the next day go about their business. They get drunk, create smoke rings, and in the weirdest form of rebounding, turn each other into someone they love.  There is a spell they used where they are that person for the length of time they are wet.  Quentin turned into Mayakovsky (dang, years later still thirsty), and Emily turned into Alice.  Rebound sex time! Quentin has regrets the next day. He doesn’t want to go down that path of using Emma and that spell to feel better. Speaking of Alice, she almost has Quentin get hit by a bus when she appears to him across the street looking creepy saying “Help, me.” And that’s how we end the episode.

Fen is finally interesting!  I understand now why the writers changed her character. I will have more on that in my book spoiler section.  The show has been hinting of rebellions since Eliot became King.  Having a group want a Fillorian to be one of the rulers is understandable.  Since Martin Chatwin (Charles Mesure) was a child of Earth and screwed future Earth rulers of ruling effectively, may leave some Fillorians feeling salty.  However, considering Eliot and the others finally defeated the Beast (at the cost of one of their lives no less) and helped solve the crop crisis, the rebellion needs to take several seats back and give Eliot a chance.  Bayler trying to convince Fen to destroy Eliot’s reign from within is stupid.  Eliot has been gracious enough to ask her advice on political matters as a native to Fillory and he didn’t have to.  She is in a unique position and I’m glad Fen so far has decided to stand by her husband, despite her history with the FU fighters.  If she was an ambassador that could help smooth things over with the rebellion, that could work.

Sorry I chuckled with Margo when Baylor mentioned the rebellion name.  Seriously, Foo fighters?  Did you see Margo’s reaction that Fen was pregnant?! My guess is Margo is going to find out about Fen and Bayler. Tells Eliot before Fen does.  Eliot will not take the news well and wonder if Margo is trying to sabotage his relationship with wifey.  Something happens to Margo, blah, blah, blah, kiss and make up once he realizes the truth.  Also, Abigail, her slothness, is hardcore! She had the worse execution of the council.  I’m with Margo about the patriarchy of Eliot having the final say despite her being High Queen.  It should be equal darn it! Who else wants to see flashbacks of Eliot’s childhood? I do!

Penny is STILL having issues with his hands, really? I do find it interesting that the concept of storing away magic and the Incorporated Bond is introduced now instead of way later.  This makes me think that the timeline for a particular story arc in the books has been moved up to coincide with saving magic in Fillory and Earth.

Compared to the Books (Spoilers)

There were several Easter eggs in this episode; one of which was the prophecy rabbit.  Our first talking animal yay!   Sorry but Abigail having an interpreter doesn’t count.  Here’s hoping we have more in our future.  Another one was the Incorporated Bond and the storing of magic. My guess is Mayakovsky wants to eventually break the bond, and they may have Penny do it as part of his journy.   Quentin and Plum may still do it later like in The Magician’s Land to not only create another world, but bring back Alice.

One of the things that I love about this show is that they are exploring events that happened “off-screen.”  The only reason we even know about the assassination attempt on Eliot is because he happened to tell Quentin in The Magician’s King. Since the trilogy is mostly told from Quentin’s point of view, it got frustrating hearing about events that occurred secondhand.  Exploring more on the assassination attempt again helps Margo and Eliot get some of the spotlight.  Hopefully this arc will blend the kickass that Fen was in the books, especially considering she died way too soon in The Magicians.

Another story that I’m happy to see play out, although irritating temporarily, is Penny.  We hardly saw him after the first book.  What little we did see was cool with where he wound up but I want to see how he became who he did in the books.  And the battle he had with the help of the dragons against the gods.  I’m really hoping they show that.  That may blow their budget, but it will be worth it.

A concern that I have is I feel like I’m not seeing enough of the evolution of the characters’ magical skills.  Because of the timeline of the books, we got to see not only their growth as characters, but also their skills as magicians through their experiences in school and after they graduated.  It helped that they graduated before a lot of *ish hit the fan. I need to get more of an evolution.  It doesn’t help that it appears they are still supposed to technically be in school.

Julia’s story arc has taken a different turn.  I was surprised that Grossman didn’t do the pregnancy angle in the books.  However, because of the foreshadowing of emotional shade that the Beast discussed with Julia earlier this season, the writers may somehow still incorporate Julia losing her humanity to become a dryad.  I’m looking forward to seeing what they do with it though.  Hopefully we will get to see Kady get her revenge against Reynard in a very satisfactory manner.

There are several other thoughts I have but that will have to do until the next episode.  What do you think so far? For my non-readers, do you think Alice is somehow still alive? Sound off below in the comments what you think of the current storylines!

TVTalk with The Nerd Element Ep 148