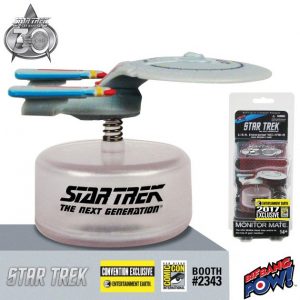 You don’t have to travel to the 24th century to get this Galaxy-class, fifth Federation starship! Thanks to Bif Bang Pow!, you can celebrate the 30th Anniversary of Star Trek: The Next Generation with your own U.S.S. Enterprise NCC-1701-D at San Diego Comic Con. 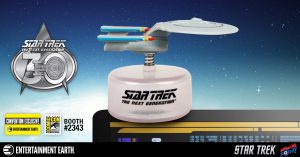 The out-of-this-world Star Trek: The Next Generation Enterprise Monitor Mate™ Bobble Ship with a clear base is crafted of PVC plastic, the miniature bobble starship measures about 2 5/8-inches long x 1 7/8-inches tall (including the base) x 2-inches wide.

This Monitor Mate™ boldly goes where no bobble has gone before. Apply the non-damaging adhesive pad that sticks it to your computer monitor, car dashboard, or any smooth, even surface. It comes packaged on a TNG-themed blister card and is individually numbered with a holographic sticker.

The first opportunity for fans to grab this limited-edition Monitor Mate will be at San Diego Comic-Con on July 20, 2017, in the Entertainment Earth booth (#2343)! Hurry, there are only 350 pieces available!

(*NOTE: This item will first be sold during San Diego Comic-Con 2017 at the Entertainment Earth Booth #2343. If supplies remain after the show, pre-orders will be filled and shipped to you then, in August 2017.) 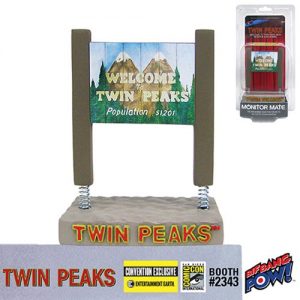 Welcome to Twin Peaks! Start bobbling! The iconic welcome sign from Showtime’s highly anticipated TWIN PEAKS television series is now as an incredible mini bobble head that sticks to the top of your computer monitor (or elsewhere), thanks to a non-damaging adhesive pad. Measuring approximately 3 1/2-inches tall x 2 3/4-inches wide, the sign bears the words “Welcome to Twin Peaks – Population 51,201.” It’s Individually numbered with the production run number on a holographic sticker. Add this Twin Peaks Welcome to Twin Peaks Sign Monitor Mate Bobble – Convention Exclusive from Bif Bang Pow! to your collection! Ages 18 and up 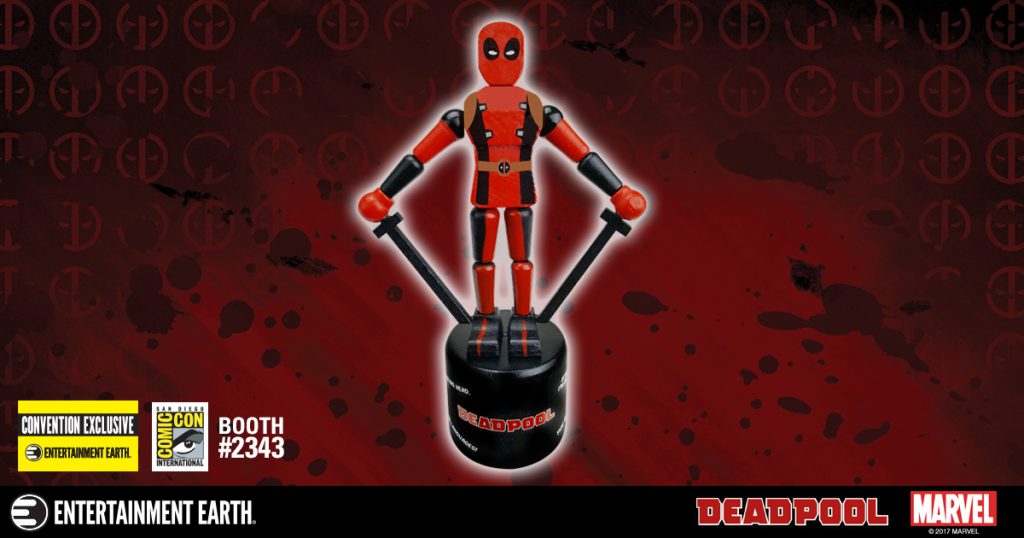 Thanks to the clever designers at Entertainment Earth, you can enjoy Deadpool as this 5-inch scale floppy wooden puppet that collapses, moves, and stands up again when you push the hidden button on the bottom of the base! Created from solid wood, this Deadpool Wood Push Puppet features vivid hand-painted artwork, along with some decal elements. Cute and fun as can be, the wisecracking crime fighter is designed in a vintage style reminiscent of traditional push puppets known as Wakouwa. Each Entertainment Earth Convention Exclusive is individually numbered with the production run number on a holographic sticker – only 492 figures produced!

Phrases on the base include: