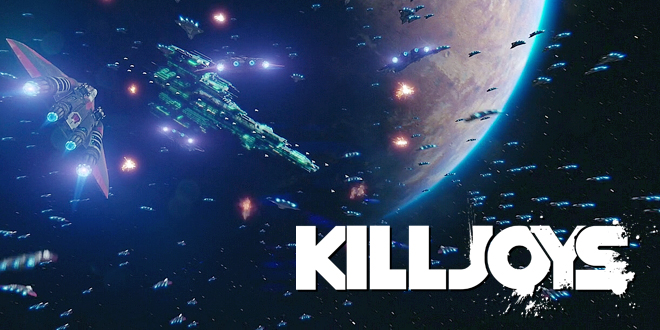 What do you do right before war o’clock? If you’re Team Awesome Force and friends, you party! Well, you have a cookout on a foreign moon at least. You set the mood to remind everyone what’s important, like friends and loved ones. And you plan for what’s to come once the storm has passed.

Which is why D’av is so stoked showing off farm land on Leith for Johnny so he has something to look forward to when all is said and done. They all know if everything goes as planned, Dutch won’t be around but at least Johnny will be sorted, goats and all. 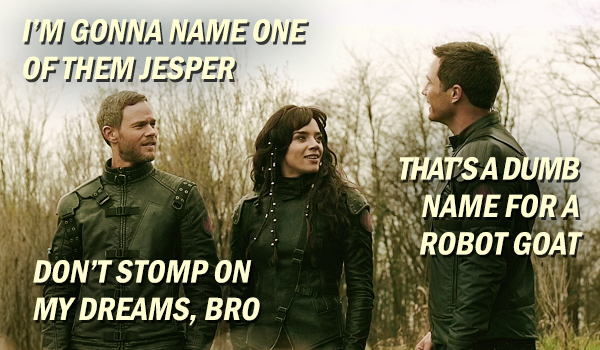 It’s a good thing they’ve got their robot goats in a row as their war party sees the Hullen fleet flying over their position on Leith and they all realize it’s go time. Except it totally isn’t.

Back on Lucy, our team waits and waits. And waits. But the Hullen fleet seems perfectly happy to sit there and do absolutely nada. 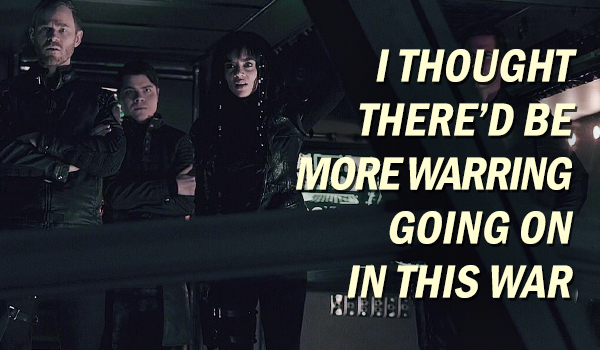 Zeph calls Dutch down for a moment. She’s zeph’d a new stabby ring device that, per Zeph, contains Dutch’s whole life. We find out later on who Dutch uses it on but I’m still perplexed why it was created in the first place. But anyway Zeph tells her to stab it in the brain somewhere. 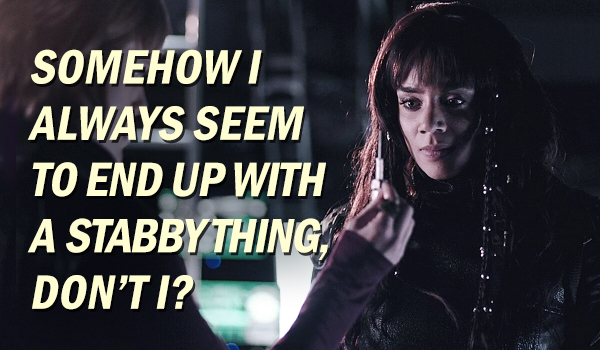 Anywho…during her confab with Zeph, she gets a call directing her to the med bay. And Alvis’s body. Yes, they finally found him. Dutch wants this kept secret since nothing says really horrible omen like murdered respected religious figure right before a war. RIP cute little monk face.

As D’avin preps the teams aboard the RAC, Turin steps in and wants to return to active duty. D’av gives the idea a hard pass and it’s actually Fancy who has to come to his rescue (he does that a lot these days). D’avin’s like, really? And Fancy’s like, fo sho. We need all hands on deck.

Meanwhile Dutch is all hot and bothered, and not in the fun, sexy way either. She wants answers from Kendry, at gunpoint. Why isn’t Aneela running to her rescue? What’s the holdup? But Kendry legit sneers at her. SNEERS. 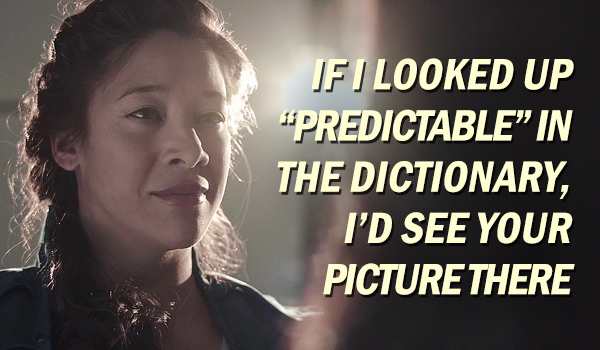 Johnny’s doing some prep work of his own with Khlyen’s dreadnought when Dutch shows up for a chat. Except it ain’t Dutch and it takes Johnny all of 3.2 seconds to sort it out. Sadly, it was not in time to prevent Aneela from drilling a hole in his chest with the aforementioned dreadnought. 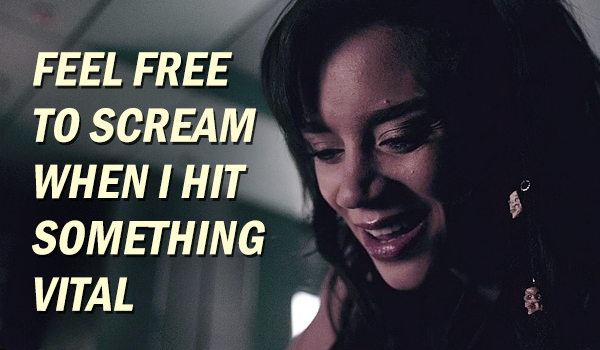 Thankfully, Lucy rescues him with a blaring noise and shoos scary, stabby 00zing green Aneela away from him, giving him enough time to set lock down measures in place.

But not before Aneela’s troops infiltrate the RAC, rescue Kendry and, oh yeah, subdue Dutch. Kendry passes Aneela on her way out with her Dutch cargo. They kiss, evilly of course, before each continues on to their respective objectives. Ah…true love, Green Queen style. 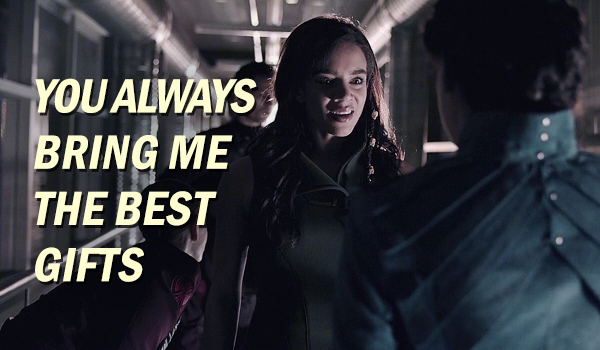 Once back on board the Hullen Armada, Kendry gives the order and the first wave Black Root ships launch. It’s war time baby! But our peeps are ready and thanks to the sonic device on Leith, they’ve set the trap. Blissfully unaware, the Hullen enter the kill zone and are quickly wiped out by Fancy and the Cleansed (which totally does not sound like the name of an alternative music group).

Thanks for the fancy flying, Fancy! 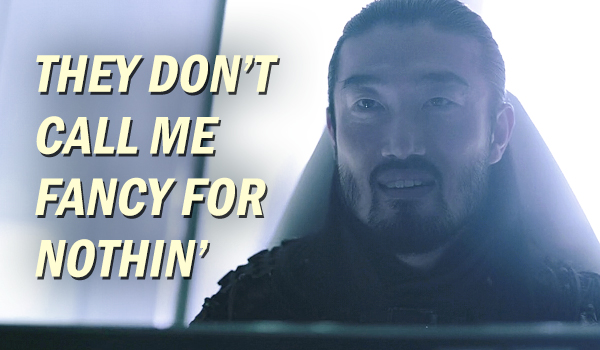 Kendry drags her permanent whipping boy Gander forward and asks him why he failed so miserably. He tells her that while the humans had some sort of technology to turn their ships off, it’s no bigs because they know where they are. Uh oh, Pree and team! Trouble’s coming your way.

Our girl Dutch finally snaps out of it on another ship, alone and moving away from the war and Kendry can’t help but rub it in Dutch’s face. 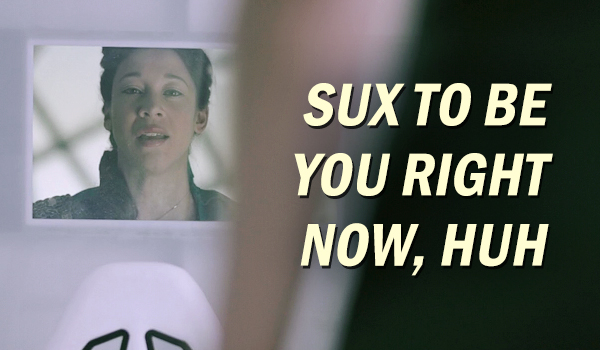 D’avin and Zeph, both alerted when Johnny was attacked, try very hard to keep him from being an idiot but you can’t keep a good Jaqobis down. Zeph issues an awkward (read desperate) declaration of love and finds herself being the meat in the most adorable human sandwich ever. 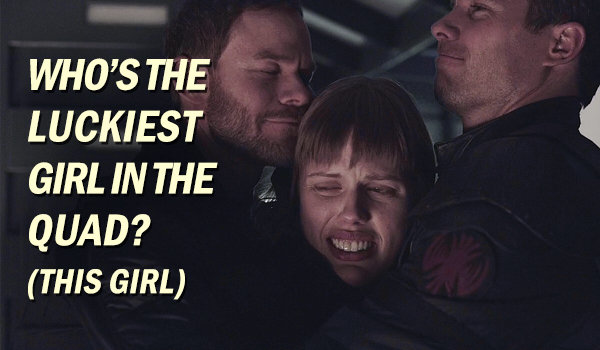 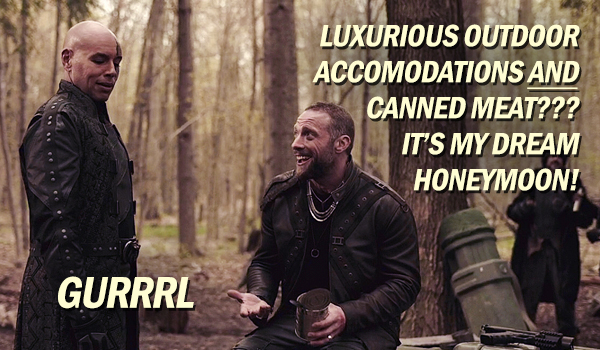 …before they’re under attack and have to pack up the sonic and split.

D’avin and Johnny head for the Hullen ship to find Dutch (who they wrongly assume went ahead of them willingly) and proceed with their plan (which is already scuttled, let’s be honest here). But Kendry catches up to them and tells them not only is Dutch not there, they won’t be for long either because she is ready to have them totally deadified. Johnny disrupts her evil monologue by telling her they need to keep Aneela from killing Dutch and vice versa because the way they’re connected. If one dies, the other dies. Kendry seems a smidge suspicious. 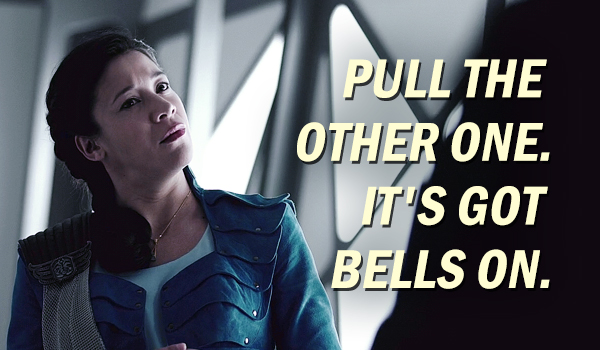 Yes, he lied through his teeth. But it sure bought them time! And now they’re all off together to Scarback Necropolis to stop Aneela and Dutch from killing each other.

Meanwhile things are going pretty crappy everywhere else. The second wave of Black Root ships launch and this time, it’s not so whack-a-mole-y. At least on our side of things. So Turin calls for a retreat of our ships. But things aren’t great at the RAC either so he sends Fancy away and tries to fend off the Hullen troops as Fancy leaves to save Pree, Gared and the sonic device. But they want to stay with the rest of their peeps and enjoy their explosive honeymoon like all honeymooners do. They’ll provide cover fire for Fancy’s escape though. 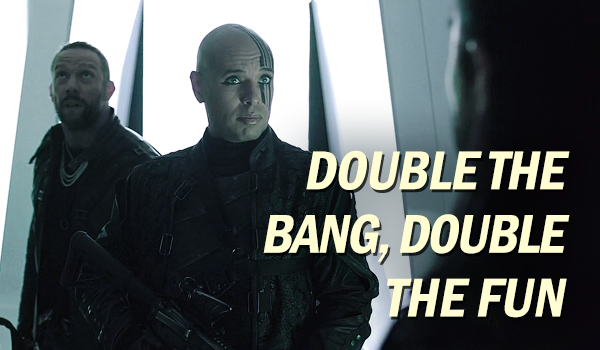 Back on the RAC, Turin’s willing to sacrifice himself to stop the Hullen. Unfortunately, the grenade he rigged stepped on his big hero moment. 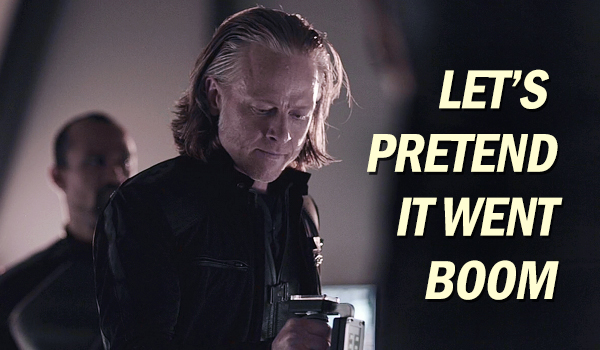 Over on Scarback Necropolis Aneela and Dutch’s first meeting goes…poorly. Aneela brags about Alvis and Johnny then becomes livid when Dutch mentions Khlyen’s name (she believes Dutch killed him). That is until Dutch gets close enough to Aneela to jab her in the brain with Zeph’s brain jabbing memory ring thing. 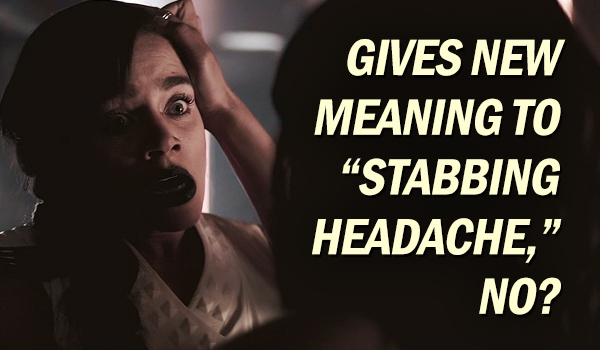 And with that, all Dutch’s memories are downloaded into Aneela’s brain. She sees Dutch’s life flash before her eyes and finally remembers who she is.

Now the pieces of her life fit into place and she realizes it’s Dutch she’s been missing all along. Literally, since Khlyen surgically removed her origin story out of her head. They bond, well…more accurately, they stop trying to kill each other for the moment. And Aneela shares with her the fact she named her after her mother: Yalena.

They get to at least one important truth: Khlyen was trying to protect them both from the Lady. Aneela wants to close the door and stop the Lady from getting out of the green. That means sending Yalena back into the green. Dutch agrees but only if they go together into the green to take down the Lady as a team.

As they sink into the green, Kendry and the Jaqobis’ bros arrive and watch in horror, not knowing what’s going on or why. They only know that now there’s a sea of creepy green mechanical spiders heading their way at max speed so they immediately about face and rush back onto the elevator. 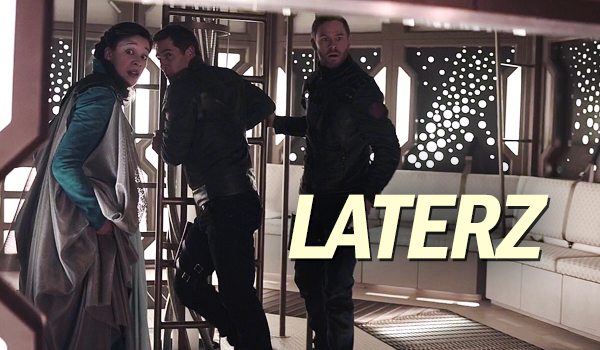 Lucy arrives at Scarback Necropolis but Black Root ships are swarming. They’re not from me, Kendry says. It’s the Lady. She tells them they have to make sure no one approaches the green pool Dutch and Aneela entered or they’ll never get out.

Their hands are tied so Johnny orders Lucy to cut the string for the elevator on both sides to prevent any of the Lady’s troops to get to Scarback Necropolis. He has one condition: Kendry has to end all hostilities. She’s like, you’re gambling with Dutch’s life and they tell her, she’d be a-okay with it. Since it’s the only way to save Aneela, she agrees to Johnny’s terms. With her compact of green goo, she orders the surrender.

Of course none of this helps Turin who’s being lined up to be Hullenized. Except…it’s Fancy to the rescue again. I’m so glad my faith in him has been validated over and over. Le sigh. 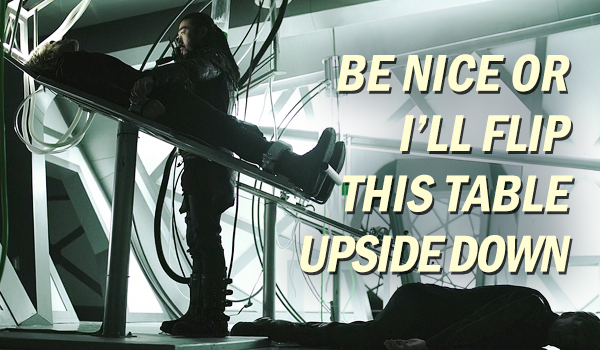 Everyone’s celebrating. Pree and Gared on Leith and Zeph and … PIP???? Oh Zeph. You can do sooooo much better than him, baby girl. 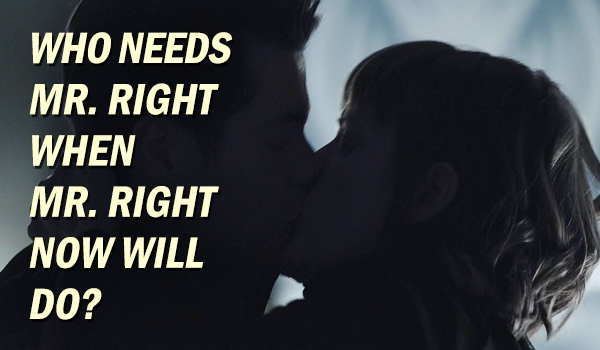 Lucy cuts the cord at both ends for the elevator and Kendry, D’avin and Johnny go spinning off through Space: The Final Frontier. They’ll have plenty of time alone now to chat about stuff like child care and baby names (among other things); so it’s a good thing they like each other! 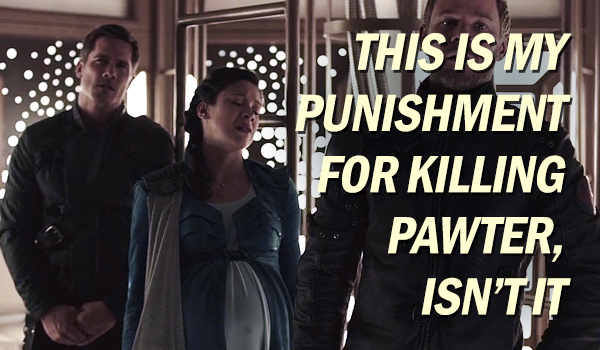 Meanwhile Aneela and Dutch (both with white hair) awake in the green space, where Yalena was first born. They wonder where to start looking for the Lady when Khlyen shows up. Aneela warns Dutch it might not be him but she insists it is (though how she knows, I have no idea). And he proves it by taking the dreadnought from Yalena and turning into two blades: one for each of his girls. 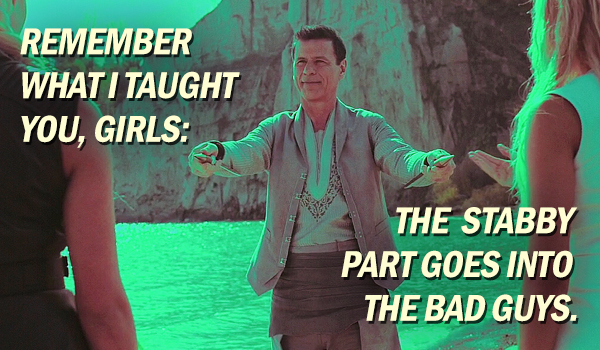 Wargasm included everything you’d want for a season finale. There were twists I know I wasn’t expecting. I hoped for some of the moments we got though. Such as Turin showing he can really be a strong leader and that he actually possesses the capacity for self-sacrifice and courage. Fancy was a hero many times over. It could have gone the other way. He could have given into his fears and self doubt but instead he embraced the honorable warrior within. Then there were scenes I didn’t know I needed to see til I saw them: the Jaqobis bros trapped with Kendry. The outdoor shindig and of course, robot goats.

The scenes with Aneela and Yalena were so powerful and I’m excited to see where their story in the green goes.