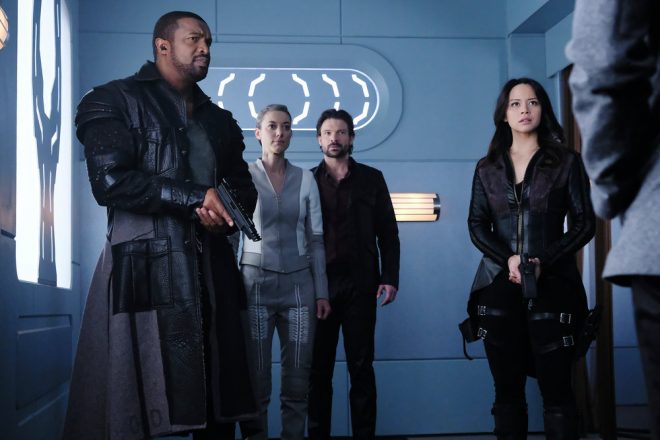 My reaction after the latest episode of Dark Matter titled “Built, Not Born”:

Suffice it say, this is my fave of the season so far!  So many revelations about Two (Melissa O’Neil) and Android’s (Zoie Palmer) friendship that makes sense now! Here is a brief recap then thoughts:

Victor (Christopher Cordell) asks for Android’s help.  According to Victor it was an accident that killed the owner of a humanoid named Anya (Willa Wilner).  Him and his droid companions Ruac [Conrad Coates] (who we met before) and Anya need to head to an out of the way planet for sanctuary in the Antares sector.

This planet is also conveniently where their creator is found.  However, the Galactic Authority (GA) somehow keeps finding them.  Anya has a chip stuck in her head that’s blasting out a signal.  She sacrifices herself so the crew can make it to the planet. Ruac was also damaged from the scuffle between himself and Anya’s owner.  To the point where he shuts himself down.

The Raza crew make it to the planet, finding what appears to be an abandoned station.  Two, Six (Roger Cross), Android, and Victor are greeted by an android named Chase [Kyle Mac] (who looks like Arrian, the droid that blew himself up at Eos-7).  He recognizes Two and Android, who he calls Rebecca and Suki respectively.  They are taken to a room where the droid’s creator Dr. Irina Shaw (she looks like Android mind you) is in stasis.

Dr. Shaw helped create Two/Rebecca at Dwarf Star Technologies.  Seeing how Rebecca was treated, Dr. Shaw helped her escape.  They went to the planet, far from the influence of Dwarf Star.  Dr. Shaw wanted to give androids free will, so created the upgrades so they could flourish.  Rebecca’s and Irina’s relationship grew into a loving one.  Some androids came there to help with the cause.  Eventually it was discovered that Dr. Shaw had an inoperable brain tumor.  The other androids soon left to pursue their own lives, until Chase and Rebecca remained.

Chase created Shaw look-alike Android for Rebecca while she went to try to find a cure.  Dr. Shaw would remain in stasis until a remedy was found.  Here we are present day. Two decides to provide some of her nanites to potentially help Dr. Shaw.

The facility can generate androids.  Sarah (Natalie Brown), who has been living in the ship’s computer now has an opportunity to gain a body.  Three decides to support her decision so brings her consciousness to the facility for the transfer process.  Of course during the transfer the GA finds them. Turns out Victor had the tracking device in his brain as well.  It’s inoperable for removal but Dr. Shaw can shut off the beacon so it stops emitting a signal.

The GA has started destroying the facility.  Fortunately, Dr. Shaw has another hiding spot and needs to complete Sarah’s transfer on her ship.  Three must leave Sarah behind to escape the GA.  Android decides to stay with her crew (because Victor has been trying to convince her to go with him) but gives the man a goodbye kiss before leaving.

Back on the Raza, Three (Anthony Lemke) cheers up himself and Android with whiskey.  She tries a smile for his efforts.  That scene was too adorable! On Dr. Shaw’s ship, the process is complete.  Sarah is back with an android body!  She is the first of her kind to have human consciousness in a droid body.  She feels herself yet powerful, different.  Sarah sees what really happened to Anya’s owner. Victor killed him in cold blood the bastard.  Things are gearing up folks!

I LOVED the backstory between Android and Two!  Not only what Chase recounted but also what Victor showed Android as flashes.  I felt the flashes helped back up what Chase said.  We didn’t get to see any of Ryo’s story arc this week, so seeing him in the flashback made me miss Four even more.

Another thing I liked about the flashes was that we found out what happened to the original crew members, mainly, Portia took control of the ship by killing them.  Boone was along for the ride.

Losing Dr. Shaw I think hardened Rebecca that when she “became” Portia, that persona took over.  Android may have reminded Portia of her past, but I think a part of her felt free to explore that underlying darkness because of Dwarf Star’s treatment of her.  The search for a cure probably became secondary to Portia’s life.  Five doing the memory wipe gave Two the opportunity to be the person she was when she was with Dr. Shaw.

Zoie Palmer did the damn thing playing both Dr. Shaw and Android.  Android has shown vulnerability before and this time was no different.  Everyone, including the audience, has wondered from the beginning, why she was different?  Now that she knows, Android felt like she didn’t measure up to Dr. Shaw.  An understandable human emotion.

It was perfect that Six was the one to give Android some perspective when they were on the Marauder.  The conversation had just the right amount of encouragement and philosophy that Six does so well.  He kept it objective.   Conversations between Six and Android have been so rare that it was nice to see such an intimate moment.

Side note: I rolled my eyes every time the GA would show up, especially at the end.  I was like STOOOP already.  Then finding out Victor was guilty of having that device in his head irritated me too. Can’t take the blame completely since the Raza’s scan didn’t pick it up.

I knew it was a matter of when, not if, the opportunity would present itself for Sarah to somehow get a new body.  Ever since it was discovered she was alive in the ship’s computer I have been leery but enjoyed Three’s happiness with her.  She even helped the crew in episode “Hot Chocolate” which I think added another element in have a consciousness in the ship’s main frame.

Having Sarah around has softened Three even further into a likable character.  The only thing about Three though is I feel like he is starting to lose his edge.  His instincts are still good (he was on point about not trusting Victor) but there was a natural toughness when we first met him that seems to be leaking out of him. It would help if Three didn’t get his butt kicked almost every episode.

Sarah now being an android makes me wonder what enhancements we will see from her that may be different from both Two and Android.  Will she have limitations because of her consciousness being in a machine? She is the first after all.  There has to be some glitches. This is one arc I’m looking forward to seeing.  Hopefully this means that we will see more of Palmer doubling up as Dr. Shaw.

Chase looking like Arrian from the season 2 finale was clever on the writer’s part.  Five probably would have become friends with Chase if he had not tried to change Android.  She was real quick to correct him that the crew likes her the way she is. I was like, “Go head Five!”

Victor turning in to a douche was not a surprise for me.  I think his intentions with androids being independent is genuine.  His feelings toward Android feel real too.  However, there is a ruthlessness to him that was lingering and is starting to be more prevalent now.  Speaking of feelings, that last kiss was fire, right?

I wonder if Victor killed before?  What bothered me was Ruac, the one black android. Really? You framed him?  What is worse, his neural matrix was so damaged he shut down permanently.  Also, Victor was hoping that Android’s memories would be horrible enough that she would stay with him.  He was sooo disappointed when Android wanted to stay.

Boone and Portia 2.0 is somewhere cooking up a plan with Ferrous Corp and King Ishida.  Will Dr. Shaw and Sarah run into them at some point? Boone would remember Sarah and Portia (if the alternate universe is the same) would remember Dr. Shaw.  Could they team up with them instead of the Raza crew?

There are avenues for the writers to explore with this and we are stepping into another event Android was told would happen in her time jump.  Next up is the Dwarf Star conspiracy.  I expect more WTH as we are closer to the end of the season.

What did you think of the episode? What were your favorite moments? Sound off below in the comments!

Killjoys S03E06 Recap/Review: Day of the Dead (and Dying)