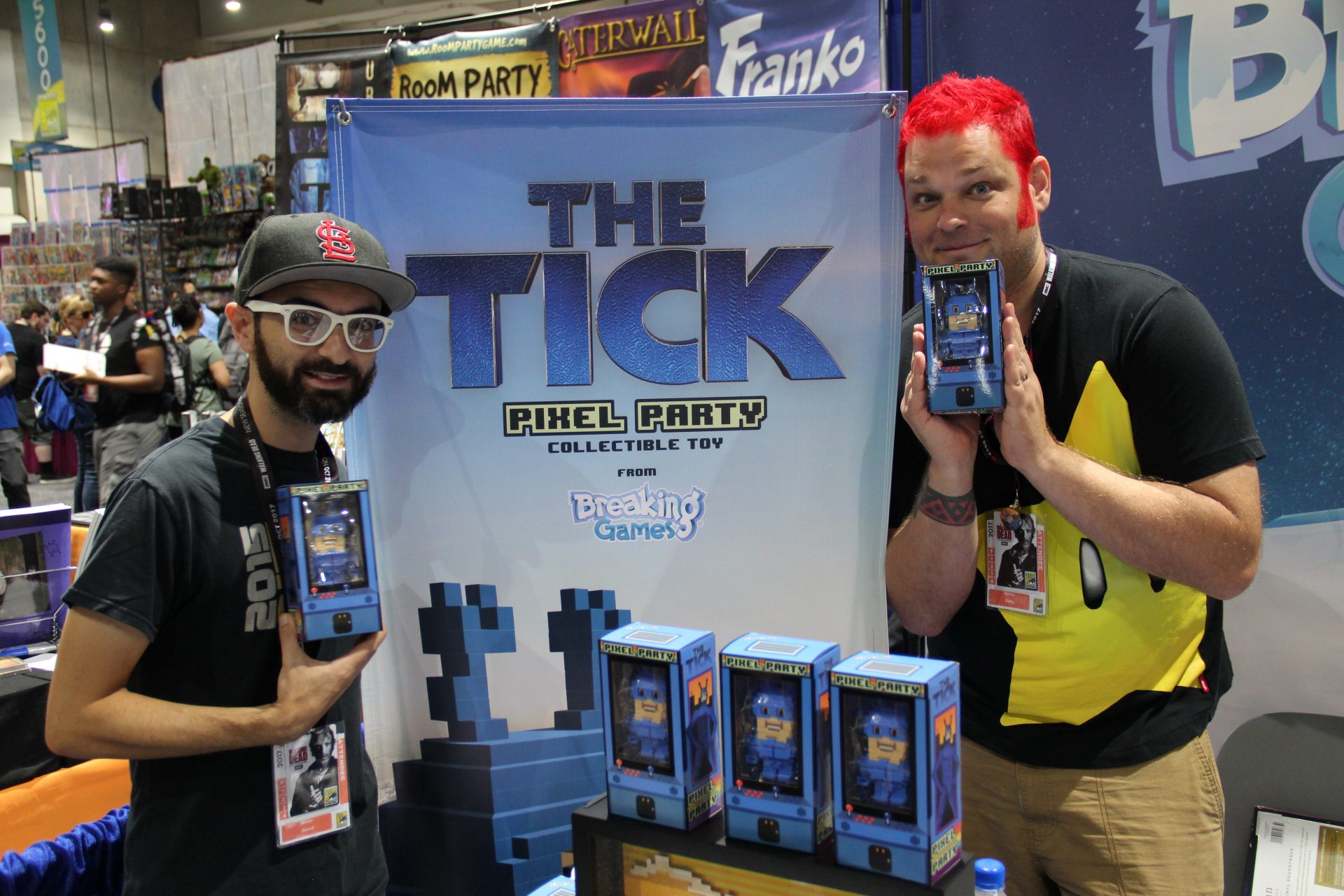 Discovering something new in nerddom, whether it’s a comic, game, show, or toy, is an integral part of the San Diego Comic-Con experience. This year brought the debut of the Pixel Party toy line’s Tick figure, which immediately caught my eye, being the big ol’ Tick nerd that I am.

In “POOP: The Game,” players take turns ridding themselves of all their poop cards on a toilet card. However, the toilet can get clogged. “It’s really silly and especially fun to play with fun people,” Sewell said.

“‘Billionaire Banshee’ is a game where everyone playing pretends they’re single and looks for a soul mate,” Razlo said. Players must choose two cards on their turn from two piles, “Perk” and “Quirk.” The other players vote to see if that combination is someone their friend would actually date.

The two met at PAX South in January 2015, where their respective games sold out on the first day. “Since then, we’ve travelled the world selling our games together,” Sewell wrote to The Nerd Element post-SDCC. The two men have three different companies between them: Feels Right Design is Sewell’s company, while Game Yay Fun! Is Razlo’s. Breaking Games is the pair’s joint publisher.

The Nerd Element spoke with Sewell, a San Diego native, and Razlo, who hails from New Hampshire, at SDCC and after to learn more about their new Pixel Party toys:

The Nerd Element: Tell me about the toy line first.

Razlo: The basic concept behind the toy line is, “What if your favorite licensed character jumped out of an 80’s arcade machine and turned into a plastic toy?” To further that concept, each box is its own arcade cabinet; behind each toy, there’s a fake video game that they happened to have jumped out of. So as you’re collecting the toys, you’re kind of building your own personal arcade.

TNE: How did you get involved doing the Tick?

Razlo: We started off with some original toys because we wanted to sell the concept of the toy line and also have fun making up our own characters. We have a Series 1 that actually, through circumstances, hasn’t come out yet.

We have original characters that we made, five different toys, and then we went to [New York] Toy Fair earlier this year. [W]e got a hold of a bunch of different licenses that we had an option to work with, and I’ve been a fan of the Tick since my teens—

Razlo: When I was given the option of all these different licenses I could work with, I said, “I want to make something based on the Tick.”

Sewell: I also grew up with the Tick. It was every Saturday morning, Fox Kids; me and my brother would watch The Tick and loved that show.

[A]fter years of being on the front lines of seeing—of going to all these conventions and seeing what people like and what they respond to, we put our heads together and came up with this toy line.

TNE: What are some of the other popular characters that you have?

Razlo: Right now, we haven’t announced any of the other licenses that we’re going for, but outside of The Tick, in this same series, we also have Arthur coming out soon. The Tick we rushed to get for San Diego Comic-Con. Arthur is more complex because he’s got the wings and things, and we weren’t able to get him manufactured in time.

Sewell: And we will say that we really liked working with Sony, too. We definitely would love to do another one of their licenses.

Sony is the official license holder of “The Tick” Amazon series and they were a pleasure to work with in every facet of the project. I think it helped that we knew the characters and vibe this new series. They actually came by our booth at San Diego Comic-Con and were even nicer in person.

TNE: When will Arthur be available? What about the original characters you created?

Sewell: Arthur is still in the production stage. Those wings are tricky! We’re still working that out actually so don’t have an exact in-hands date but can say we’re more anxious than anyone (well maybe not more than Griffin Newman, the actor playing Arthur: https://twitter.com/GriffLightning/status/885111642467561472).

The first Series 1 character to be released will be Meowstronomy, a cute astronaut cat to kick off the original characters.

TNE: Is there anything else that you’d want our readers to know about yourselves or the toys?

Razlo:  I think if you’re a fan of collectibles that are trying to do something that have a unique voice, and if you like supporting small independent developers, then it would be great if you gave our toy line a look. Both Blaise and myself are stay-at-home dads that design toys and games when the kids aren’t bothering us—

Razlo: In this space, there are a lot of gigantic companies with hundreds of people working for them, and we designed all the packaging, all the toys, and we’re just—

Sewell: —We handle the social media—

TNE: The definition of an independent.

Razlo: Right, so we’re trying to do big things with the least amount of resources available.

The Pixel Party Tick is available at https://breakinggames.com/collections/check-out-our-hottest-new-games/products/pixel-party-the-tick. You can also follow Sewell and Razlo on Twitter: @FeelsRightDes (Sewell) and @Razlo.