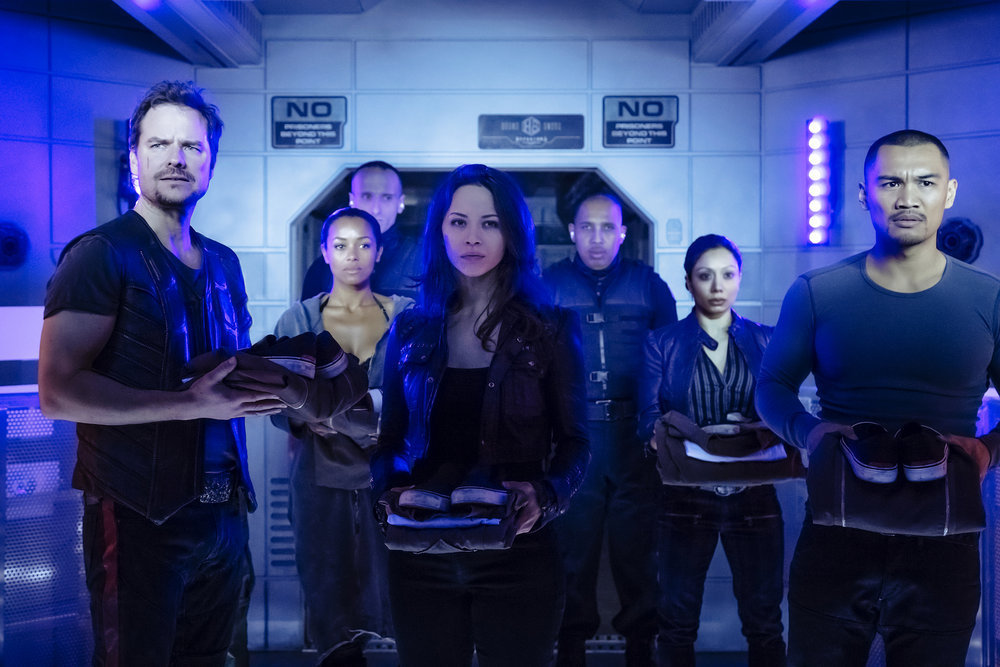 Dark Matter definitely started their new season with intrigue, a shocker of an ending (which I’m still in denial about) and what looks to be an action packed 2nd episode.  To check out the recap of last week’s’ episode, click here.

A few of us over here at The Nerd Element were lucky enough to talk to some of the cast in anticipation for the season to start.  It was a pleasure talking with Melanie Liburd who plays Nyx and Shaun Sipos, who plays Devon.  We also got to talk with Melissa O’Neil (Two), Alex Mallari Jr (Four aka Ryo Ishida), and Anthony Lemke (Three).

In last week’s episode, we got introduced to some new bloods, Nyx and Devon.  While Liburd starts off fighting within a few minutes of seeing her, Sipos’ intro was a little more relaxed.  At least his character Devon has some medical training which may come in handy for our Raza Crew.  Here’s hoping he finds a way to escape with them.

While it may be intimidating coming into a cast that has already bonded, Sipos was glad of the welcome he received.  “They all were really gracious and welcoming.  You know a lot of times you can feel like the new kid at school and everyone’s sort of unsure and you don’t know where you fit and you’re kind of walking [cautiously] trying to figure out where that you know fit is.  But everyone was so warm and welcome[ing] that it was really amazing.“

It probably helped Sipos that he knew someone already.  “I had worked with Alex [Mallari Jr] prior and did a miniseries with him in Russia.  So I had a bit of a soft lead in.”  So who welcomed him on his first day of set?  “Well there was Melissa.  It was actually kind of a — it was kind of a three pronged gesture I think.  There was Melissa, there was Anthony and there was Alex,” Sipos reminisces.  That makes sense considering all three are within the same area of the prison vs. the others in the first episode.  I do like the first real interaction Sipos has with Lemke as Three, since his character Devon prevented Three from potentially getting sent to the psych ward if he kept injuring himself.

Lemke describes Sipos fitting into the cast with “a little Shaun people story: “

“I remember we were shooting something and I think it was Bruce the director and he — we finished a blocking or something like this, and Bruce is a totally casual relaxed kind of dude and the whole thing is just going simply and people are kind of joking around. “

“I remember Shaun you came up to me and you sort of had this quizzical look in your face and you asked me, ‘is it always like this?’  I kind of didn’t know what you were talking about so I had this lost look in my face and I remember asking you like what do you mean?”

And you’re like ‘fun.’  I was like yes, it’s always like this pretty much.  And Shaun you know, Shaun fit right in and was a really great addition to the team…It was like he’s always been there and that’s the same for everyone who came in as new characters this year. “  Isn’t that sweet!

At the moment it looks like Devon and Three could potentially develop a friendship or at least a tolerance of each other at the prison.  We’ll see how this relationship grows during the season.

As for Miss Nyx!  Liburd set the bar high by going toe to toe against Two in the premiere after knocking out Three near the beginning of the episode.  Both Liburd and Melissa O’Neil gave us some behind the scenes insight.  Like their characters, O’Neil and Liburd complement each other on their skills.

Says Liburd:  Well, we had a good day, a good half a day of rehearsal for me especially because it was my first.

I remember being told my first day on set would be OK, you’re going to be in your underwear, you’re going to do a fight scene and welcome to this crew of amazing actors! Off you go!  Had me feeling terrified thinking, ‘oh sh**!’

Yes, I mean the guys were amazing.  Melissa is such a pro I just watch her in action…show Melissa a fight scene and she’d be like yes I got it and I’d be like oh my god…”

That would definitely be an unforgettable day on set.  I would probably feel the same way as Liburd. O’Neil chimes in about learning then filming the fight scene, thinking Liburd is being modest.

“Mel is being modest, you are being modest because I remember on that the first day when we did rehearsal we were definitely moving at one speed.  And the thing is because when you have fights that are actors versus another actor, you have your stunt double come in.

So Mel and I actually only fight it for certain pieces together but I remember what bits I saw of her on that first day she was working at one speed.  And the next day when we were actually doing the fight like she was totally at full speed.

It was amazing she obviously did what I had been doing all of first season where you go home and you stand in front of mirror and you fight yourself until you’re going at lightning speed.  And yes, she really brought it that day.”

I can’t wait for these two ladies to start kicking butt together!

I feel like there are so many words to describe what I predict this season will be like, but if I had to narrow it down to three?  Mallari Jr. and Lemke helped out with this one.

First alien? I wonder what kind of makeup will go into it?  How long before we meet this mysterious alien?  I have so many more questions of course!  Dark Matter has hit the ball rolling and I think I will thoroughly enjoy this ride!