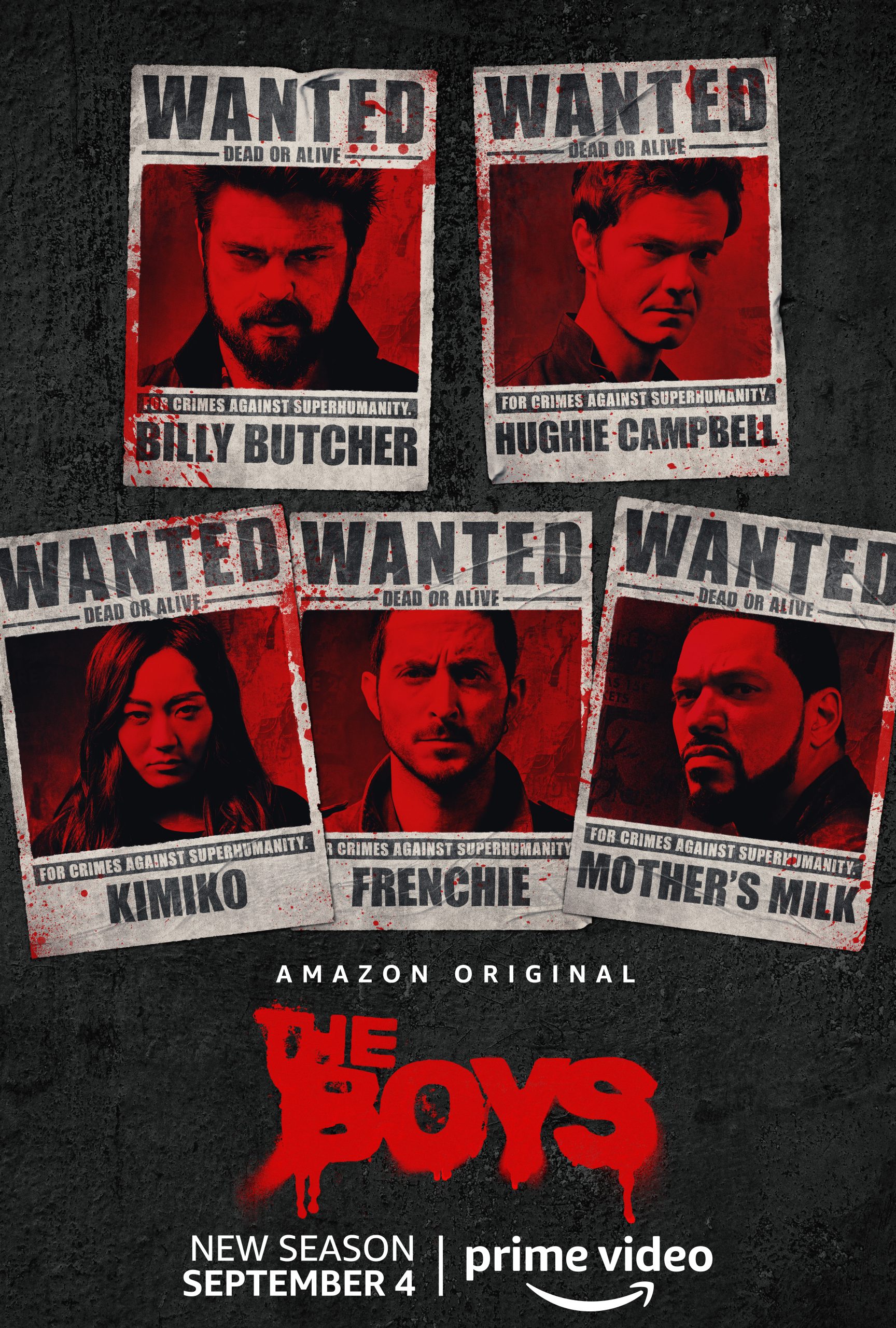 Note: The following interview contains minor spoilers for season two of the type that are mentioned in reviews of the new season.

When it comes to leaders, Billy Butcher (Karl Urban) of Amazon Prime Video’s “The Boys” is both the man you want in your corner and the man you can’t necessarily rely on to still be there when you turn around. In the clutch at the end of the first season when the Boys need him most, he’s nowhere to be found. Granted, it’s because he’s had the gut-punch of his life after villainous superhero Homelander (Antony Starr) reveals that not only is Butcher’s presumed-dead wife Becca (Shantel VanSanten) alive, but she’s been raising the son she had with the Homelander. But the Boys don’t know that.

Mother’s Milk (Laz Alonso), on the other hand, seems more stable. When we first meet him in the show, he’s been busy taking care of his wife and child after having left behind his black ops job with the Boys. When Butcher comes and asks for his help against the supes, he agrees, albeit reluctantly, and then he does whatever he’s asked. He may complain about it—to say that their friendship is strained is downplaying it—but he’s a stand-up guy.

Both Urban and Alonso paired up to talk to reporters via Zoom roundtable to talk about Butcher and Mother’s Milk and to tease a little of what’s in store in the upcoming season of the show. They also shared a couple of humorous anecdotes that resulted in a lot of laughter, providing a glimpse into the real-life chemistry that is replicated between their respective characters.

Urban was first asked if there was anything Butcher wouldn’t do to get his wife back, while Alonso was asked to talk about Butcher and Mother’s Milk’s friendship.

“The Billy Butcher of season one was ruthless and driven and obsessed with seeking revenge and that was a false road to go down,” Urban began, noting that Butcher definitely suffered for it in the end.  “Season two for Billy Butcher is all about finding his wife Rebecca, rescuing his wife Rebecca, and the very question that poses of Butcher is ‘How far are you willing to go to achieve that? Who are you willing to sacrifice?’ And, you know, some very, very interesting, diabolical events happen along the way,” he said.

Alonso said he thinks Butcher chose Mother’s Milk (who both actors frequently referred to as “MM”) for the mission in season one “just to have someone constantly trying to tell him ‘No’.”  He said that he “strongly believe[s] that he did that on purpose, that he knew that having someone who is a real friend, who cares about him, would be the only voice in that particular group that could get through to him enough to be his conscience.”

Alonso said that while he didn’t want to speak for Butcher or Urban, he does think that Mother’s Milk serves to ground Butcher “in the moments where he might grow cold and lose it” because his character will stop Butcher from doing anything that could kill him. He likened it to having a “motherly or fatherly instinct,” giving as an example the “toughest guy in the hood growing up with a puppy, and all of a sudden you hear baby talk, and no matter how tough they try to act, they’ll sneak in a kiss or two on the puppy.” Caring for a “fragile animal brings out our humanity,” Alonso said.

He also thinks that Hughie (Jack Quaid) serves that purpose for Butcher, not as a pet, but as a responsibility Butcher has because he brought Hughie into the Boys. At one point in the first few episodes of the new season, Mother’s Milk refers to Hughie as Butcher’s “canary in a coal mine.”

Urban agreed with Alonso’s assessment, calling the canary analogy “a very smart literary device” that was also used by Gene Roddenberry on the original “Star Trek” TV series. He said that Roddenberry “essentially fractured the mind of Kirk into two, and he had the voice of conscience and humanity and altruism embodied in Dr. McCoy, and cold hard logic in Spock. Quite often these two characters would debate the central argument of the central dilemma and leave it up to Kirk to make the decision.”

“In a way like Laz said,” Urban continued, “MM is that embodiment of Butcher’s conscience. He serves a purpose to connect Butcher with his humanity, and the canary is a very specific image-invoking animal because obviously it was used in the mines to alert the miners if there were any poisonous gases because if the canary died, they would all die. And not to get too big on it all, but existentially, the battle is really for Butcher’s soul, for Butcher’s humanity. And MM is to keep him on track.”

Both actors were then asked how their characters had changed from season one to two. For example, Mother’s Milk became more of the leader of the group when Butcher went forward with his plot against Homelander in the first season despite the rest of the Boys refusing to take part.

“You know, MM doesn’t want to be a leader. He doesn’t want to lead the Boys,” Alonso said, noting Mother’s Milk is fine with the status quo. “Having to do it is almost like a burden for MM,” he said, because Mother’s Milk “just wants to get back home. He had this one last hurrah that he agreed to,” but now that everything has gone sideways, he realizes that “no matter how much Purell and wet wipes and things he tries to straighten out, he can’t straighten out the situation.” Alonso said that Mother’s Milk uses his obsessive-compulsive disorder as way of controlling his environment because the situation he’s in is “a state of chaos and out of control.”

Alonso and Urban appeared to loosen up a bit more when the topic switched from the friendship of the characters to the real-life friendship of the actors. They go out to dinner together, for instance, with the two going back and forth discussing the types of cuisine they’ve tried in Toronto, where the show films. Although Alonso is Cuban, he said that they haven’t yet been out for Cuban food. The pair then joked about how they keep in shape, with Urban saying that Alonso does “pole dancing.”

The visible chemistry between the two actors is also shared among the whole cast, Urban said, calling them “a great bunch.”

He said the actors who comprise the Boys “all genuinely love and respect each other, and we have a great time on set; we laugh a lot.” He attributes the great working relationship they share to showrunner Eric Kripke, who, he said, “put together such a fantastic group.”

“When you’re working the kind of hours that we’re working,” Urban continued, “it’s terrible if you’re working with people that aren’t on the same page. We just we really bonded super quickly. And you know, even I remember right from day one, from Laz’s first day on set, it was just like brothers instantly, and I feel really blessed. I really do.”

The Nerd Element then asked about a practical part of filming the show: how the actors deal with getting covered in gore and blood. “The Boys” frequently pairs the stylized violence of comics with the blood and guts of horror films. Case in point: the teaser trailer for season two showing the Boys driving a boat straight into a whale. The answer to the question took an unexpected turn to a couple of very funny anecdotes.

“I tell you what,” Urban offered, “the level of blood drenching in season two was taken to a whole new level.” Urban said that it got “to the point where it’s soaked through every article of my clothing, and I would literally go home and see a pile of dirty laundry, and it’s all soaked red with this fake blood.” The memory caused Urban to laugh. “We have some interesting fun stuff happening in season two,” he said.

“Well,” Alonso said, “not all of us needed to have fake blood at all times, but because Karl has a strange addiction to backgammon and Frenchie—Tomer [Kapon]—is his backgammon foe, there were days that Tomer wasn’t supposed to work, [but] Karl would have him on the call sheet.” At this point, Urban started laughing.

Alonso continued: “Tomer would have to come on set, get full bloodied—unbeknownst to Tomer that he wasn’t working that day—just so he could play backgammon with Karl [and] find out later on that he’s not working.”

“It was a two-hour makeup process, but you know what, he loved every minute of it,” Urban said, laughing.

“It’s constant practical jokes on set between all of us, at least within the Boys,” Alonso added. “We are one big, practical joking family.” That story brought up another incident for Alonso, who added, “We’re not even going to talk about, you know, the dog, the dog ejaculation. Should we talk about that? Oh my god,” Alonso continued, to which Urban immediately said, “Yeah.” They were both smiling.

“So, there’s this scene in season two where we get to meet Terror, who’s Butcher’s dog,” Urban related, “and as in the comic books, Terror has this habit of just humping anything.” Urban said that they had to get a dog that could hump on command, and one day on set with Alonso and Quaid, the latter “picked up this dog’s toy and was trying to encourage the dog to come and play with him. And the trainer said, ‘Oh, that’s actually the dog’s hump toy.’ It’s this crusty pig.”

“He was squeezing it. He’s putting it on his face,” Alonso laughed.

“Only on the show,” Urban laughed. “I mean, it’s insane.” Both kept laughing.

On a somewhat more serious topic, Urban was asked if in season two, the audience would get to see a big confrontation between Butcher and Homelander.

“I’m afraid you’re just gonna have to wait and see on that,” Urban responded, “but what I will say is that right across the board, the stakes are raised in season two, and the conflict is all around.” Urban teased that the conflict is not just the external one between the Boys and the supes, or among the Boys themselves, but “also internally within each character as they struggle to come to terms with the given circumstances. And what I can say is that season two is deeper for the characters.”

Urban related that Kripke told the cast they were going to get deeper into character study for season two, and be less about the spectacle. He laughed as he said that Kripke didn’t “necessarily want to go bigger with the special effects and try and top season one, but that’s exactly what he’s done.”

“Not only has he gone deeper in the characters, but the effects and the set pieces are mind-blowing. Some of the stuff we got to do real old-school filmmaking techniques that most producers wouldn’t allow their cast to do anymore. So that was a lot of fun,” Urban said, smiling.

Amazon Prime Video’s hit series, “The Boys,” returns September 4, 2020, for a second season of mayhem, fun, and bloody diabolical shenanigans, with three episodes being available at once, followed by one-per-week for the rest of the season