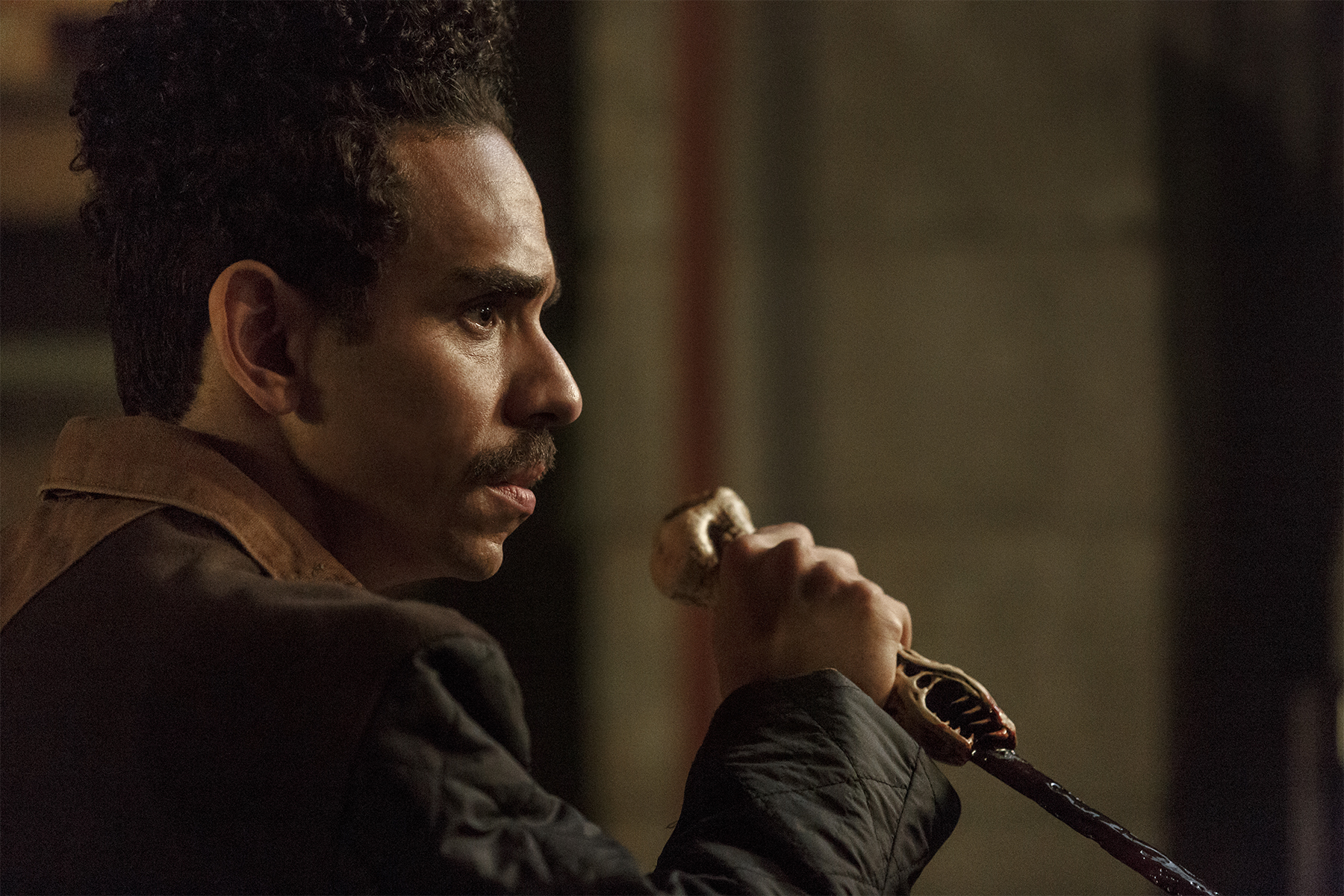 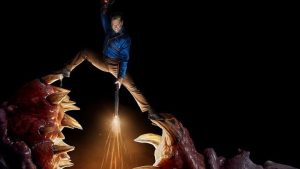 It’s no secret that Ash Vs. Evil Dead has been having a ratings problem, as lamented on a weekly basis not just by yours truly, but by AvED fandom across social media (#bringbackboomstick). The stars of the show have given many interviews this season as well discussing the show’s status as “on the bubble”—neither renewed nor cancelled, but perilously close to the edge of doom.

Given the events of the season and its foreboding atmosphere, culminating in Ash’s (Bruce Campbell) (temporary) death, it seems the showrunner and writers may have been thinking this is the final season as well. Ash sacrifices his life on a plan neither he nor Pablo (Ray Santiago) is sure will work in an attempt to save Kelly (Dana DeLorenzo) and Brandy (Arielle Carver-O’Neill) from the terrors of The Rift. All of our main folks—Kelly, Pablo, Brandy, and now Ash—have died at least once, Pablo and Kelly fighting and Ash and Brandy self-sacrificing. Where else can the show go?

Well, this is Ash Vs. Evil Dead we’re talking about, so the answer is: All sorts of places. It ain’t over ‘til it’s over. There’s still time in the season to reverse all this evil and start fresh. Hope springs eternal in my AvED -loving heart. Plus, there’s been something off this whole season since the time-travel last season reset some things. I want to know what that off-ness is.

Last week, Ash broke down and cried in grief, and this week, he willingly kills himself—with Pablo’s help—to save both Brandy and Kelly from the evil that has plagued his life since he first went to that cursed cabin. Ash has become a loyal family man, a loyal friend, and kind of actually sorta mature now. Yes, Ash is finally adulting, putting the fate of his kin and his Ghostbeaters before his own needs. Ash becoming a mentor who imparts useful advice is a new direction for him, even if he hasn’t given up his sarcastic edge (which he never, ever should).

Ash manages to rescue Brandy, but Kelly is locked in The Rift, probably by some magic Kaya and Ruby have cast. As he mentions, though, he won’t leave Kelly behind, and Pablo and Brandy are decidedly in for the ride. I’m surmising that Pablo’s Brujo Especial powers will have a lot to do with forcing out Kaya and bringing Kelly’s soul back, assuming the show goes back to the status quo as it more-or-less has at the end of every season, albeit with some twist to lead into the next one. I refuse to believe this is the last hurrah for our heroes. We’ve got two episodes left to see what happens. Join me back here for both after you watch!

Previously on Ash Vs. Evil Dead: Ruby’s (Lucy Lawless) spawn tears out of its cocoon and it’s…another Evil Ash (Bruce Campbell)! She forces him to hack off his chainsaw hand so he looks exactly like our real Ash. Meanwhile, Brandy (Arielle Carver-O’Neill) has a plan to find out once and for all if Ruby/Prevett is a demon. She, Ash, and Kelly/Kaya (Dana DeLorenzo) head to the school dance. Pablo (Ray Santiago), still in the cellar with Zoe (Emilia Burns), sees the real Kelly in The Rift and heads to the dance to let Ash know Kelly is dead and the one they’ve been talking to is possessed. At the dance, Evil Ash starts slaughtering teens; Ruby says this proves Ash is the real demon. Once real Ash shows up, Ruby gives Brandy the Kandarian dagger to kill him, but she realizes she loves her dad and can’t do it. Pablo arrives and finds out Kelly is now Kaya. Ash destroys his evil clone; an enraged Ruby throws the Kandarian dagger at him, but Brandy steps in to save her dad, dying in Ash’s arms in the process.

We start with a close-up of a bloody shoe, then pull out to see an army of coroners taking bodies out of the gym. The sheriff (Jeff Szusterman) believes the real Ash is the killer and wants to find him, stat.

Pablo and Ash are hiding in a classroom, lamenting their losses, cursing Ruby, and discussing the Kelly problem. Ash flashes back to the original trilogy of Evil Dead and recalls seeing Prof. Knowby in The Rift that he didn’t yet know was a rift. He wants to go in there and grab Brandy and Kelly so their souls can go back in their bodies. Pablo sees the coroner taking Brandy out and they realize they need to get her body before the coroners perform an autopsy on her.

Inside The Rift, Brandy sees another kid running away. The Rift is basically Elk Grove, only mostly deserted and glowing green. Brandy goes to her dad’s hardware store and sees a menacing shape inside. She also sees the teen girl Ruby killed. The shape comes up behind the girl; webbed hands come out of the ground and drag her down. Before they can get Brandy, Dalton (Lindsay Farris) saves her. Bloody opening credits!

Pablo and Ash steal the van with Brandy’s body and race off. There’s another body in there, too. Ash says they have to get to his “evil cellar.” He tells Brandy’s body he will bring her soul home. As he goes back to the front seat, the other body bag starts moving.

Brandy tells “Kelly’s friend” (Dalton) she thought he was dead, and that her high school counselor was a demon. She asks him if this is Hell. “I dunno,” he begins. “I feel like maybe Hell is the next stop.” Dalton takes Brandy to a place where the evil shape doesn’t go. In the background, someone is screaming. Sounds like Hell to me.

Ash and Pablo take Brandy’s body out of the van, while in The Rift, the evil shape is hunting more teens. Kelly finds Brandy and Dalton hiding from the shape and leads them into the bar where she worked while alive. In the real-world cellar, Ash asks for Zoe, but she’s not there. Pablo thinks that in order to get to The Rift, they have to let the evil kill them. Ash looks at Brandy’s body bag and says he’ll do it for Brandy and Kelly. Pablo has the Kandarian dagger and says maybe Ash could just stab himself with it instead of trying to find a Deadite to kill him. Ash lines it up with his heart, but he can’t do it, so he asks Pablo to help. Pablo starts having doubts about the plan, but they decide to count to three and shank Ash. Pablo does the final push and Ash falls over dead. We even hear his heartbeat stop. Pablo tells dead Ash to give him a sign so he can open The Rift for Ash, Kelly, and Brandy.

Ash wakes up and thinks the plan didn’t work, except…he has both of his hands! He runs out and calls for Brandy, but winds up in the sperm bank. In the real world, Pablo can’t believe what happened. He hears a noise—someone is coming. He sees that Brandy’s bag is empty. Uh-oh.

Kelly tells Brandy that she and Dalton have been fighting the shape. They all hear something coming toward them and hide, but it’s just Ash. Dalton takes a knee immediately, bless his heart. Kelly realizes Ash is dead and he admits he killed himself, which Kelly can’t believe. Ash says he has a plan. “Well, an idea of a plan!” he admits. The shape is coming after another teen, so our gang hides.

Back in the real world, Pablo goes upstairs in the hardware store to look for whomever—or whatever—is making noise. The lights start to flicker; one of the dead teens is possessed and attacks Pablo, sending the dagger flying. Pablo grabs a heavy wrench and hits her.

Ash says they have to get to the cellar, have Pablo open The Rift, and walk through. He leads them back through the sperm bank to the door he thinks leads to the cellar, except they wind up outside. The shape comes up out of the ground, and Ash sees his Delta ‘88 is in the Rift, too. Dalton volunteers to distract the shape so they can escape. He kisses Kelly and calls out to the thing. Kelly is scoring with the kisses this season!

Ash jumps in the car and decides to drive through the “soul-sucker,” while a bunch of webbed hands start trying to pull the Delta ‘88 to Hell (so it’s a Helta ’88 now—get it? Get it?). The shape’s minions grab Dalton, who says “Go fuck yourself” before he’s dragged to hell. The Delta is being dragged down, too, but Ash gets it started—and they are dragged under anyway. The teens who’ve been running from the shape all watch in fear. Suddenly, the car bursts out of the ground. “Okay ladies, buckle up,” Ash says as he drives through the shape, which disappears. They finally make it to the hardware store, but down in the cellar, there’s no opening to the real world. “Pablo, you had one job!” Ash laments.

Pablo, meanwhile, is still fighting the teen Deadite, which he destroys by impaling its hand and sticking its head in a paint can shaker. There’s no shortage of creative deaths on this show. Ash’s TV ad comes on the store monitor, repeating, “Pablo, you had one job.” Pablo realizes it’s the sign he asked for, so he goes to the wall with the Sumerian writing and opens The Rift. Brandy goes through, but something is blocking Kelly from moving forward. Ash gets sucked through before he can help her. “Bye, Ash,” Kelly says softly.

Ash comes back to life. He and Pablo run up to the van to let Brandy out of her body bag before she suffocates. She’s pretty freaked, but cries in relief when she sees Ash. Ash says they have two problems to resolve, one involving Kelly. “Ghostbeaters never leave a man behind,” he tells the others.

Elsewhere, Kaya, who’s brought Ruby a present in Zoe, tells Ruby they are fucked because they left the Dark Ones trapped. Zoe calls Ruby “Demon Woman of Fire” in Latin, then calls Kaya a traitor in English. Ruby grabs a fancy knife and says Zoe will help them “rewrite our destiny.” Her eyes are black. Zoe looks terrified. End credits!

“To save those two, I would submit to a prostate exam.” Ash is dead serious. What, too soon?

Pablo: “Yeah, Ruby Knowby. She’s the demon puta that we gotta fuckin’ shank!” I think Pablo has been hanging out with Kelly too long.

Linda B. Watch: Linda B. does not appear, not even in The Rift.  At least she’s not dead…yet.

This week in AvED music: “Save the Last Dance for Me” by The Drifters plays in the coroner’s van that Ash and Pablo commandeer. Coroners have a very deadpan sense of humor. “Kick Out the Jams” by MC5 blares out of the Helta ’88 in The Rift. “Dirty Deeds Done Dirt Cheap” by AC/DC plays over the closing credits. All songs are dead on!