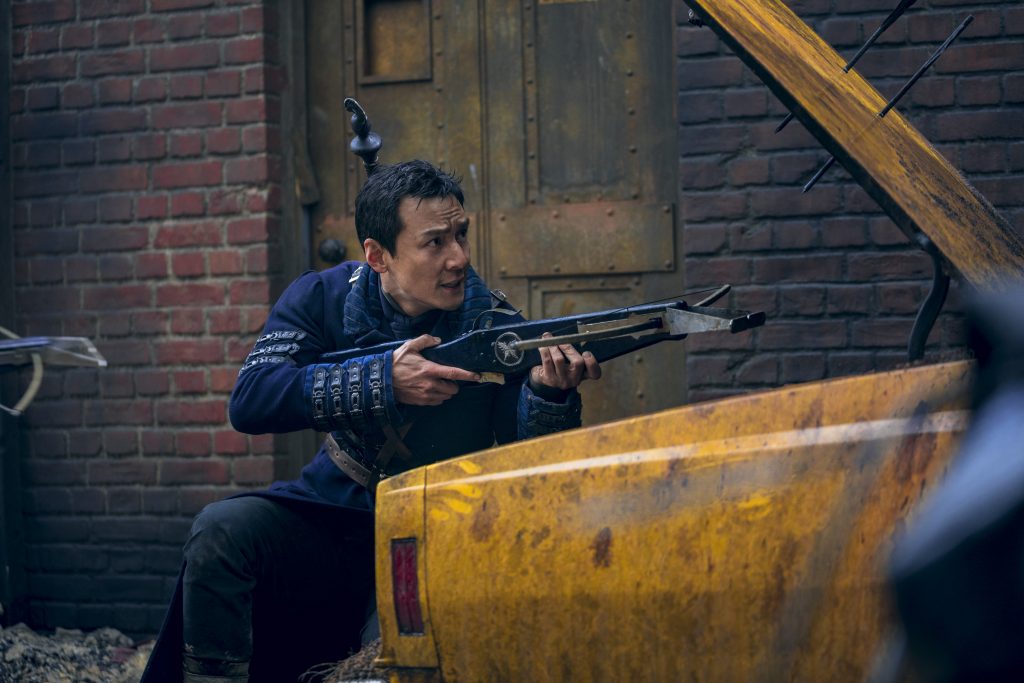 Okay now things are starting to really pop off on Into the Badlands: Leopard Snares Rabbit.

I enjoyed the episode more than the last two episodes combined. Even though again, certain aspects were predictable, I also felt it provided needed development for some of the characters.

Cressida (Lorraine Toussaint) was painfully seeing visions last time we saw her. What makes it so bad is I did not miss Pilgrim (Babou Ceesay) and crew at all.  That is troubling to me considering I love seeing any new black characters featured on the show.

What was good was seeing another aspect of the war between the Widow aka Minerva and Baron Chau (Eleanor Matsurra).  Side note, I really hope to see both Baron Chau and Lewis Tan debut has her brother in episode four.  I feel like seeing Chau’s clippers so far has been a huge tease.

There were several quotes I felt were profound, especially made by Sunny regarding the war. He remembers being the same way as that young clipper, blindly following a leader into battles and for what? Glory, honor for serving his baron?

What conflicted me was I understood why the young clipper Arthur (George Sear) defied orders and killed Chau’s sniper.  The man has killed several fellow clippers for months before Sunny caught him.  I got miffed when the Arthur was describing what happened like he did all the work. Yes, you killed the guy, but after Sunny defeated him already.  I did enjoy the fight scene between Sunny and the sniper.

Lydia (Orla Brady) also dropped some truth bombs to Tilda, which she took to heart when she negotiated with The Widow near the end of the episode.  Tilda seems to be a sponge.  She has listened to The Widow, Waldo, Veil (lost cause there), and now Lydia.  Trying to combine all that advice into something that will help her survive while being a leader is tough.  I am hoping to see more of Tilda’s growth both as a fighter and leader.  She can learn more from Lydia than Minerva for now.

I missed seeing Sunny being a leader.  The competence and authority he showed towards the Widow’s clippers in the front lines just prove once again why he was the baddest man in the Badlands. Irony that in pursuit of the witch Ankara, he had to help the Widow’s campaign by bypassing a section held by Chau’s sniper for several weeks.

When Moon appeared at the checkpoint later in the episode, I thought “oh snap, are we getting that rematch early?” Alas, not happening. I did want to see Moon in action leading a campaign though.  Showing up to capture Tilda was fine but I need to see more strategy.

The fight of Tilda vs. Nathaniel Moon (Sherman Augustus) was my favorite for this episode.  I loved how Moon again was talking smack to Tilda.  I am biased in thinking she handled herself better than M.K. (Aramis Knight).   She just has a nice fighting style.  Similar to the Widow but she made it her own, especially when she uses her cyclone ninja stars (hoping I am getting the term right here).

So far Moon’s defeats have been with teens.  I need him to go against someone experienced soon, like maybe Chau’s brother or eventually Sunny again.  He held his own against the Widow but she still beat him at the end.

Before the fight when I saw the Tilda’s group training I got the sense that her minions were made up of former clippers and butterflies of various barons including the Widow.  My guess is they were sick of the BS that is this war as well and wanted to help the little guys.

Okay did anyone else immediately think of that Star Wars: Force Awakens “traitor” scene when the one butterfly looked pissed that Iron Rabbit was Tilda?

Oh Odessa (Maddison Jaizani).  It was so cute to think you had a chance against Moon.  I know you were distracting Moon so Tilda could get away, but I will give you props for being most improved.  The petty in me wanted Moon to kill Odessa, but it made sense to keep her, so they can find out where Tilda is hiding.

Girl, Moon was offering the “D” and you are shutting him down? I get it, but you can still do friends with benefits for right now! The Widow is supposedly trying to change things.  What should she care if Moon hooks up with you if he still does his job as Regent and you as Viceroy? Take it while you can! Moon already decided to protect you by not revealing you wrote the note warning Tilda to bounce from the refugee camp. You might as well take that much needed relief.

Choosing the horse as a new signia was a smart move on Lydia’s part.  I wonder if the Widow will see the hidden meaning?  Lydia is playing that long game. This reminds me of season one when she traded barbs with Jade.  Hopefully she comes out on top this time.

I was pleasantly surprised they brought back Bajie’s knowledge of healing.  Especially after clipper Wren (Tamsen Topolski) got shot with the poisoned arrow.  I remember last season when he helped heal Sunny which was cool! I knew Wren was either going to die or get injured, especially when she got smart with Sunny about him needing her help.  My eyes rolled on that scene.

Bajie comes across as selfish but he does have moments where we see the softie in him.  However, Wren was correct in being upset with Bajie.  He made assumptions and without permission, had the doctor cut her leg off.  The man should have discussed that with her first.  She was prepared to die.  Being alive and handicapped, Wren does not have many options now on surviving, at least according to her.

That brings up another point.  Is the Widow really changing things? If so then Wren should feel like she has more options than being a cog, a clipper, or a doll. Will Minerva even have someone make a prosthetic leg? She sure did give Moon an upgrade as regent, what about someone below him? Should we still root for Minerva at this point?

I was here for M.K. getting his powers back! When his babysitters held him down pouring pee into him that was the first time in a while that I felt sorry for M.K. When he started flashing through his memory banks I was like, “oh yeah, get it M.K.!”

The Widow was shook! She was NOT ready to face M.K.!  I love how Tilda again was able to bring him from the brink like back in season 1.  They both still have a connection which is nice.  Tilda saved the Widow.  She should have the upper hand next time they talk.

Also does this mean that he can turn his powers on and off at will now? That would be an interesting development. Newcomers Nix (Ella-Rae Smith) and Castor (Dean-Charles Chapman) still need to cut themselves to access their abilities.

Killjoys S3E4: The Lion, The Witch & The Warlord aka Blonde, Bad And Beautiful