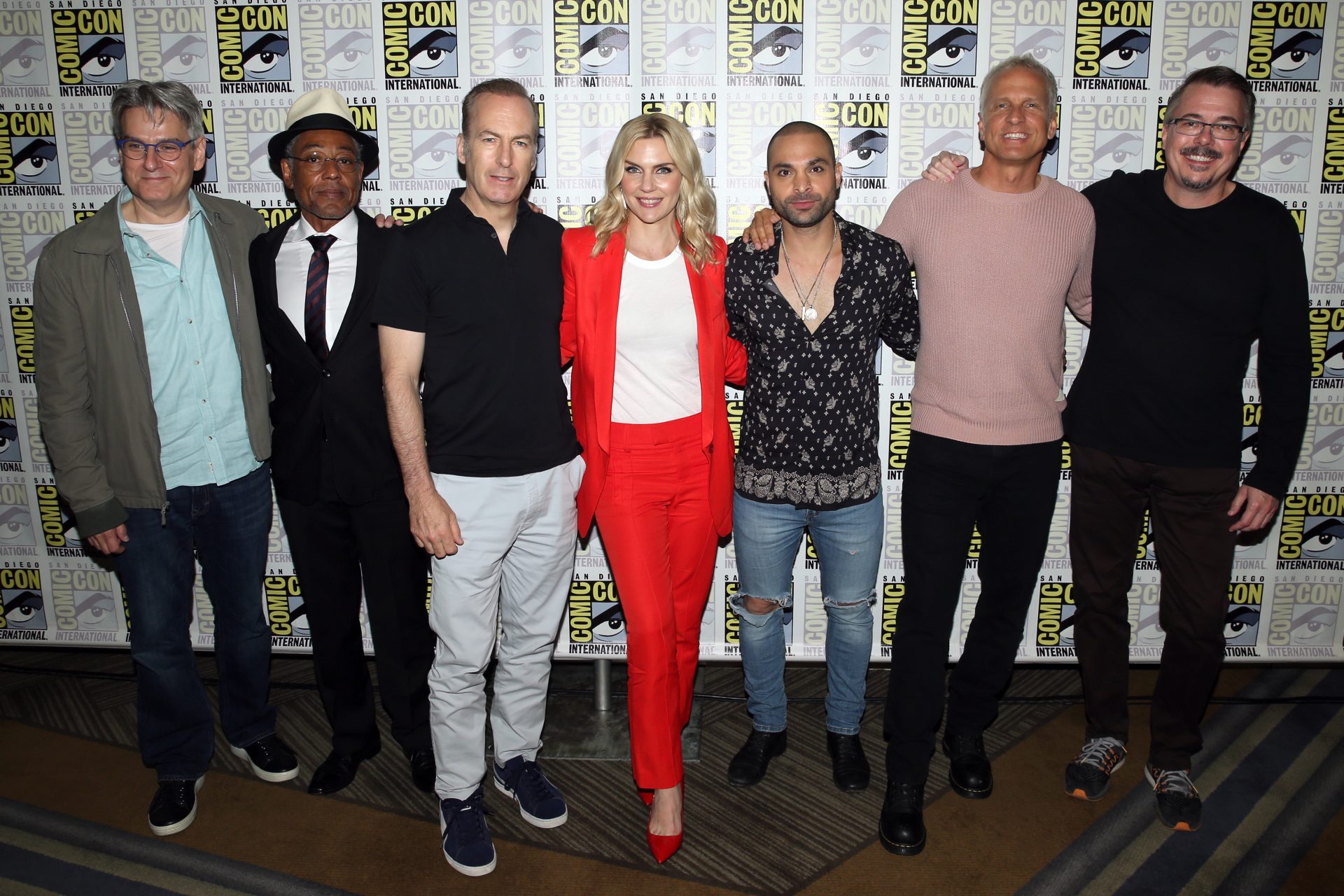 (Part II of our coverage of the new season of Better Call Saul)  Click the button for Part I of the conversation. [button color=”blue” size=”medium” link=”http://www.thenerdelement.com/2018/08/06/better-call-sauls-fourth-season-and-the-nature-of-grief/” icon=”” target=”true”]Better Call Saul Part I[/button]

The following is parts of the rest of the conversation the cast had at San Diego Comic-Con 2018 regarding callbacks to some of the characters’ pasts on Better Call Saul’s parent show, Breaking Bad:

Odenkirk: Because when they meet in the hallway, they give each other shit and they know each other.

Michael Mando: Nacho’s first mention in Breaking Bad is by Bob’s character, so it is clear that Nacho and Saul meet.

So this thing in Breaking Bad of “It wasn’t me, Ignacio sent you. It was not me, it was Ignacio.” [Saul] and Nacho know each other for sure, and 100% Nacho and Crazy Eight [Max Arciniega] know each other very well through family, and Jesse Pinkman works for Crazy Eight. There is actually, maybe—I don’t know if this is true or not, but there could be a reference to Jesse Pinkman in Better Call Saul if you are paying attention. I don’t know if it is Jesse Pinkman, but Crazy Eight mentions a new dealer who is brand new to his squad [and] who is sort of not really good at it. People think that that is Jesse’s first sort of introduction.  I don’t know if that is true or not.

Mando: And then, there is a guy that sells chicken.

Mando and Giancarlo Esposito discuss Nacho and Gus Fring’s relationship, and its relation to Jimmy/Saul:

Esposito: How interesting, you know, very interesting. Great, great ideas that you are putting out there. Certainly worlds will collide in Season Four because these two characters have different agendas that each of them have not known about, of each other. The audience may see it coming, but more than likely will not, but when those agendas are revealed, then obviously action has to be taken. It is something that I think will, more than likely, be inevitable but I will need to reaffirm more.

Mando: I think the main Nacho story breaks through and comes into focus this season. […] It is a story of the good son who has fallen from the good graces of his father and has to learn about self-sacrifice in order to redeem himself, and hopefully save his father and maybe himself.

I find whenever we had scenes with Giancarlo, the very first time that I had seen Giancarlo, I was a huge fan of his, and I remember being at [Nacho’s] lowest point and looking into his eyes, and the first thought that crossed my mind was “This guy has people in his basement.” I don’t know where that came from, but it gave me chills.

I believe that we can compare it in this situation, sort of man versus corporate. I mean, I feel that Nacho has this romantic idea of being able to walk out of there and then face this corporation that is operating on this level, on a level almost with no beating heart, just mental, it is almost all pure mental genius.

Esposito: The other element to it that I believe could be expanded on and explored as well is the father relationship, the relationship between Nacho and his father and the disappointment that he has and that his father has in him, and the relationship to Gus Fring might be able to teach Nacho something he doesn’t know, if he can be reined in. Which is the big question: Can Nacho be reined in to learn something new, become a different cog in the wheel for the cartel?  I am not sure that that is possible because Nacho has such a very strong personality and has ideas of his own.

This show is so very special because all of the characters are so intertwined with each other, one step removed. I mean, I can’t wait for the moment where you really have more screen time, you and Jimmy.  Jimmy is moving into a space that becomes darker and darker and is so seamlessly performed by Bob. You can still have this feeling where there is old Jimmy McGill there, but we are seeing him in all of his presence and all of his consciousness move more towards Saul because he is more comfortable there. That puts him in direct conflict with Gus and eventually there is going to be something happening there too, I would imagine.

Odenkirk speaks to the evolution/devolution of Jimmy/Saul, with Esposito also discussing playing Gus at a different time in Gus’s evolution as a character:

Odenkirk: Saul is a thinner character than Jimmy; he is just a front. He is not a whole person.

Odenkirk: That’s because I have a bullet-proof vest on So…boy, spoilers, right? Because this season there is some cool shit.  I know that they don’t want me to say it.

Anyway, the point is that I did have to ask that question of myself this season, so maybe that tells you something, who is Saul and how do I play him now that I have played Jimmy. He is not as dimensional as Jimmy. It is kind of easy, relatively.

Esposito: I always have to remind myself that this is Gus prior to “Gus”—my younger self, which had a different way of exacting his mission.

Gus primarily is mysterious, and the less you know about him, the more you want to know and the more you want to see him. With the work that I do, I try to do it physically and facially and use my gut to make him seem a little less seasoned in certain areas and maybe that is to make him a guy who is not so in control as when you met him in Breaking Bad. For me, it is always trying to keep that in the forefront of my brain that he is still trying to figure it out as he goes, so there is some nuance to the performance that I bring this time around with Saul as opposed to what you saw in Breaking Bad.

Peter Gould: I’ll just add, this season, you get to see the wrath of Gus Fring and it is terrifying to behold.

On the idea of the spin-off of Better Call Saul from Breaking Bad:

Vince Gilligan: I wasn’t actually expecting to survive Breaking Bad, but when it turned out, we did start joking about the idea of a Saul Goodman spin-off pretty early on. It was a joke at first, the first season or so, but within every joke is, especially a good joke, there is a big kernel of truth. I think the joke kept perpetuating because it was a really good idea, it was a really exciting idea.

I guess towards the end we were talking about doing a spin-off. I think that things got a little quiet, the rush of production and the rush of post-production…but toward the end of the season, when all the editing is done and then it is just power-timing and mixes, then things slow down a little and you can catch your breath and when I started taking long walks around Burbank…

Gould: …always, always to a bar. You know, part of the long walks, we were in a very unusual position because, at least in my experience in showbiz, you’re begging people to make something, anything, and even Breaking Bad had a long history. [I]t was not instantly a yes, but here we had a situation where, at least, there was a lot of interest from people we were working with.

I will speak for myself: I was scared that we would do something that would tarnish the value of the work that we did on Breaking Bad. I was very worried that the story would come out, “Well, you know, Gilligan by himself was great, but Gilligan and Gould, yuck!” A lot of the time we spent walking around was trying to figure out if there’s a story here, if there’s more, what is there to say about this character? Because if it’s going to be—and frankly, I think this was Bob’s concern, too, when we first started talking about it—is it just going to be one thing after another, then is it worth doing and is it going to be overshadowed by what already happened? And then as we started talking about it, we started to think who was Saul Goodman before he became Saul Goodman, and then suddenly that became really interesting and there was this image that came, I don’t remember how it came up, of the brother. I realized as we went that what made him human to me was that he had people he cared about and he had something to lose; if he didn’t have something to lose, he had no vulnerability; if there is no vulnerability, there is no story, there’s no emotion to it, no guts.

Odenkirk: I certainly thought it was a fun joke to talk about, but I didn’t take it too seriously. I really started taking it seriously around Season Three [of Saul] as a possibility that it might happen, which when you spend enough time in showbiz trying to make things happens, you don’t even count your chickens after they hatch.