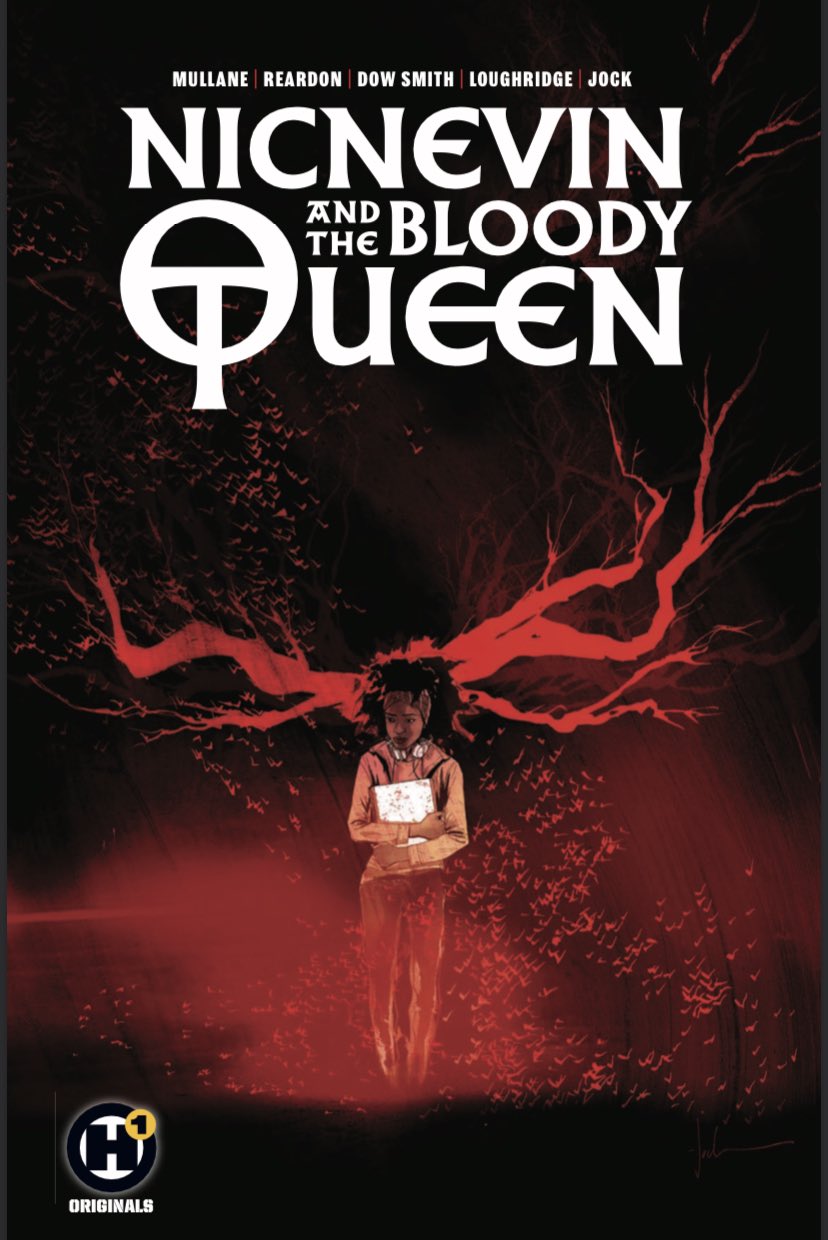 A new graphic novel, Nicnevin and the Bloody Queen, is due to be released in the UK on August 20. The horror story was released in the States earlier this year to great reviews. Read on for more details in the press release.

NICNEVIN AND THE BLOODY QUEEN, a Haunting Coming-of-Age Horror Story For Our Times

(August 13, 2020) Something strange has been unleashed in the North of England. A modern-day druid has been committing a series of ghastly murders in an attempt to unleash the awesome power of the ancient gods of Great Britain. But all hell really breaks loose when his latest would-be victim, rebellious teen Nicnevin “Nissy” Oswald, turns out to be more than she seems. In NICNEVIN AND THE BLOODY QUEEN, debut graphic novel writer Helen Mullane, acclaimed artists Dom Reardon and Matthew Dow Smith, and celebrated colorist Lee Loughridge have created a haunting and unsettling coming-of-age horror story for our times.

“Darkly magical and strange, NICNEVIN AND THE BLOODY QUEEN explores British landscape and myth in the style of folk horror film and TV from the 1960s and ’70s but with a contemporary edge.”— Kim Newman (Anno Dracula)

Humanoids, the publisher of some of the world’s most iconic and groundbreaking science fiction and fantasy graphic novels, will publish NICNEVIN AND THE BLOODY QUEEN in the UK on August 20, 2020. The book features a stunning cover by Jock, the co-creator of Wytches and one of the modern masters of comic book suspense.

This original graphic novel marks the literary debut of writer Helen Mullane, who collaborates with artists Dom Reardon and Matthew Dow Smith, letterer Robin Jones, and colorist Lee Loughridge for a different kind of horror and a different kind of heroine. In the story, London teen “Nissy” Oswald is stuck in the countryside for the entire summer with only her mother and little brother for company, but things start to look up when she meets Reggie, an attractive and mysterious older man to whom she feels inexorably drawn. As Nissy divides her time between feuding with her mother and lusting for Reggie, the small town is rocked by a grisly murder and everything changes. “I wanted to channel the feelings and attitudes that I remember so clearly from my own teenage years, the experiences of me and my friends,” said Mullane. “We weren’t wholesome or chaste, or bothered about saving the day–we weren’t the Famous Five or the Teen Titans! We just wanted to hang around, maybe get a bit wasted, get crushes on whoever was around… I feel like that sort of teen experience is rarely explored in mainstream comics.”

The original graphic novel received widespread acclaim upon its publication in the States this spring:

“A series of murders in rural England might not seem like the sort of thing that would interest a surly teenager, but Nicnevin Oswald has no idea that she’s at the center of a story that stretches back centuries and places her in grave danger. Welcome to the world of Nicnevin and the Bloody Queen…a world of druids, magical thinking and murders.”—HOLLYWOOD REPORTER

“A truly great horror story that simultaneously conjures images from that golden age of British horror, while presenting a distinct modern slant—which is both timely and very welcome. Compelling, unique, and unmissable.”—Tula Lotay (All-Star Batman)

“Dredging its dread from the deep well of teenage anxieties and British folk horror, a new original graphic novel being published by Humanoids is an old-fashioned fright yarn that weaves a lasting spell on readers yearning for an intense murder mystery with a black magic flair….  A disturbing coming-of-age horror story perfect for these complicated digital age times.”—SYFY WIRE

“Darkly magical and strange, Nicnevin and the Bloody Queen explores British landscape and myth in the style of folk horror film and TV from the 1960s and ’70s but with a contemporary edge.”—Kim Newman (Anno Dracula series, Nightmare Movies: A critical history of the horror film, 1968–88)

“For a modern teenage girl, there is no thought more chilling than a summer vacation with their mother in the middle of nowhere. But throw in witchcraft, murder, and mysterious strangers, and you have a different kind of horror entirely. … Beautifully unnerving.”—SCREENRANT

“What makes Nicnevin and the Bloody Queen so special isn’t just how well crafted and ornate it is, but how it seamlessly blends an insidious fairy tale murder mystery with the coming-of-age story of a teenager embracing her emerging identity.”—Emma Ríos (Pretty Deadly)

“Helen Mullane’s debut graphic novel Nicnevin and the Bloody Queen carefully walks the line between realism and folk horror in a way that only the best horror stories do.  Mullane’s unique take on the folklore and mythology of Great Britain, told through the eyes of a disaffected teen, slowly works its way towards an explosive ending with many terrifying signposts along the way.”—HORROR NEWS NETWORK

“Folk horror is the ideal genre for exploring the wave of unreason engulfing us, and in Humanoid’s NICNEVIN AND THE BLOODY QUEEN by Helen Mullane and Dom Reardon the comics medium may just have the final word. This is a masterpiece.”— Alex Paknadel (Friendo)

“The artwork for this collection is gorgeous… It’s easy to fall under the spell of this book…. Highly entertaining story.”—FANGIRL NATION

“NICNEVIN & THE BLOODY QUEEN is a moody slice of folk horror that peels away the skin of modern Britain to reveal its wild and bloody heart.”—Andy Diggle (Losers)

“A fantastic gothic horror, fairytale-esque story that draws in readers with an unnerving art style and a narrative that keeps you turning the pages.”—WICKED HORROR

“This is an excellent book. Helen Mullane is going to be a name to watch.”—Christian Ward (Invisible Kingdom, O-DC)

“Like a great witch’s potion, Humanoids have stirred together a cauldron of quality creators who bring their own unique skills together to create something magical and mysterious.”—PIPEDREAM COMICS

“Reminiscent of some of Mike Mignola’s best work…. The art is fantastic and the atmosphere is perfect.”—FORCES OF GEEK

“NICNEVIN AND THE BLOODY QUEEN is eerie yet cathartic. Strange yet graceful. Novel yet wistful…. [It] marks Helen Mullane as a much needed, passionate new voice in horror/weird fiction.”—Lonnie Nadler (The Dregs)

“NICNEVIN is the kind of dark and spooky British tale that appeals to the mid-teen to adult crowd and seems like a nice, fun confection—right up until it rips out your guts and leaves you with nightmares for weeks on end.  Anyone whose read Neil Gaiman’s novels can appreciate the style… It’s an impressive work.”—PULLBOX

“This is fabulous! A bewitching blend of British folk horror and coming-of-age yarn that had me racing through its pages, desperate to see what happened next. Nicnevin is a heroine for our times, a sympathetic but credibly self-absorbed urban teenager discovering there’s more to the landscape than meets the eye.”—Anne Billson (Suckers, Stiff Lips, Cats on Film)

“Nicnevin and the Bloody Queen captures much of the same brooding vibe of the old British manifestations of folk horror.”—COMICS BEAT

NICNEVIN AND THE BLOODY QUEEN is ripe with black magic, myth, and murder. The book comes alive with its honest depiction of family dysfunction and moments of quiet despair. It’s a spellbinding story, the kind that recalls the best horror stories of the past, while daring to unearth something entirely new.

Helen Mullane began her career in film distribution, managing the release of major films for the likes of Studio Canal and EOne. Later she produced the feature documentary FUTURESHOCK! THE STORY OF 2000AD and various shorts such as the multi-award-winning NASTY. Helen currently resides in northern Sweden where she lives with 80 huskies, balancing her time between writing and dog mushing.

Dom Reardon is an illustrator from the U.K. He is best known for his work in the anthology comic 2000 AD where he co-created the series Caballitics Inc. with writer Gordon Rennie and The Grievous Journey of Ichabod Azrael with writer Rob Williams. He has also worked for Dark Horse, Walker Books and Wizards of the Coast among others.

Matthew Dow Smith is a writer and comic book artist who has worked for nearly every major American comic book publisher. His art has appeared in Mike Mignola’s Hellboy, Dark Horse Comics’s Bad Luck Chuck, Aftershock’s Dead Kings, DC’s Suicide Squad: Hell to Play, and many others. He is also the writer/artist of the upcoming The October Girl graphic novel series.

Based in Hollywood, California, with branches in Paris, London, and Tokyo, HUMANOIDS was co-founded 46 years ago in Paris, France, by legendary creator Mœbius, and has published thousands of titles since, including international bestsellers and iconic series such as The Incal and The Metabarons.