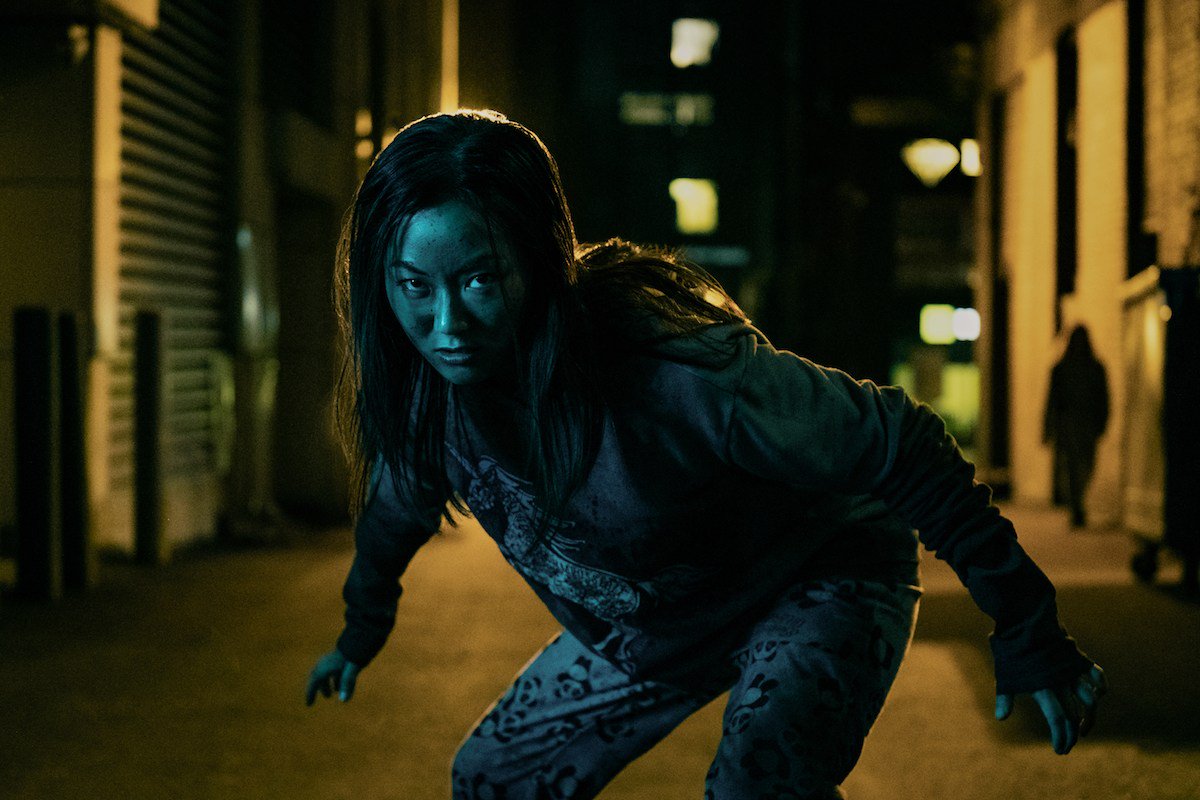 During the first season of “The Boys,” the most sensitive member of the team (not counting Jack Quaid’s Hughie, who was not really a full member until later in the season) was Tomer Capon’s Frenchie, an assassin with a seeming soft spot for emotionally wounded people. When Frenchie and fellow member Mother’s Milk (Laz Alonzo) discovered a scared and dirty woman chained in a cage, his first inclination was to save her.

Turns out that woman was the character known only as The Female in the comic book series, a Wolverine-analogue with a bloody berserker streak. As played by Karen Fukuhara, The Female (who gets a name in the show, Kimiko) is not the evil “supe” Billy Butcher (Karl Urban), the leader of The Boys, thinks she is, but a woman with a scarred past and deep desire to find her brother.

The two embark on an unlikely friendship marked by the tension it brings between Frenchie and Butcher and the rest of the team. Despite whatever violent rampages Kimiko goes on, though, Frenchie understands her motivations and stands by her side.

Capon (who is sometimes billed as Tomer Kapon) is a prolific Israeli actor known for the TV series “Fauda” (2015) and “When Heroes Fly” (2018). Fukuhara will be familiar to Nerd Element readers from her role as Katana in 2016’s Suicide Squad, and to animation fans as the voices of Alexa/Sewer Queen and others on “Craig of the Creek,” Glimmer on “She-Ra and The Princess of Powers,” and Kipo Oak in “Kipo and the Age of Wonderbeasts.” Both actors were paired to speak to reporters via Zoom roundtable leading up to the season two premiere of “The Boys.”

The Nerd Element began by asking Capon about the empathy between the two characters and why Frenchie, who gets criticized often by the other Boys for being too soft-hearted and impulsive when it comes to judging others and thus winds up causing errors on missions (in their eyes), would stick with the group.

“That’s part of the charm in Frenchie,” he said. “That’s what I love about playing him so much. He’s a clueless un-growing teenager who just wants—first of all, he wants to love, to give love, and then if you can get some back, that’s enough for him.” Capon says he loves Frenchie’s “perspective” and what it brings to The Boys.

For Fukuhara’s Kimiko, Frenchie’s empathy for her is instrumental in her becoming part of the group, considering he was the one who helped her escape her shackles. The Nerd Element asked her also what it feels like for Kimiko to be the only woman in The Boys, and how the character will carve her own space in the gang.

“I love it,” Fukuhara began. “I think it’s fun because she is the strongest character; she’s the muscle of the group and it’s unexpected because it comes from such a tiny body.”

“She definitely holds her own,” she continued. “Even if she can’t speak, she has her own agenda, needs, wants, perspective. And you get to see a lot of her personality in season two. So even if the show’s called ‘The Boys’,” she added, “I still love being the female of the boys.”

As the only supe and woman in the The Boys—not to mention how she was kidnapped, turned into a supe against her will, and caged like an animal—Kimiko has a lot of anger and aggression pent up. Fukuhara was asked about her character’s feelings of alienation.

“In the comics, she’s less human,” Fukuhara said, noting that showrunner Eric Kripke outright said he would be making changes to The Female. Fukuhara said that Kripke told her Kimiko needed “her own motives, her own personality” and some humanity.

“I always keep that in mind,” she noted, although when she’s acting, she said, it’s not always in the forefront of her consciousness. “Her entire storyline is about survival, and that is something that everyone can relate to,” she said, adding later that “it’s important for people to see her human side, but I never really thought about how to make her human because it was already in the script.”

Without going into spoilers, it’s fair to say Kimiko’s humanity—and probably many other characters’—will be severely tested once Stormfront (Aya Cash) comes into the picture. In fact, when Stormfront came up, Fukuhara definitely had a glint in her eye. Capon immediately said it would be “trouble, trouble, trouble.”

“That’s a good word,” Fukuhara agreed. “I mean, she’s a bad bitch. Not in a good way. [Kimiko’s] relationship with Stormfront comes from pure hatred—lots of trouble. She’s a bad bitch,” she repeated.

“Played by the most, nicest [person], Aya Cash,” Capon interjected. The two briefly mentioned how much the audience would hate Stormfront and how they wanted to defend Cash, who they both termed “amazing.” It was easy to see how excited they were for the audience to get to experience the upcoming character relationships while at the same time not wanting to spoil anything. The interaction between Capon and Fukuhara was infectious.

It’s no wonder, then, that during the discussion, Kimiko and Frenchie were also described as “the heart” of The Boys, which both actors agreed with. The problem Kimiko and Frenchie have, of course, is communicating, as Kimiko doesn’t speak and Frenchie doesn’t always understand what she’s trying to tell him with her drawings and non-verbal cues.

Fukuhara was able to share without spoiling the first three episodes (which were screened for reviewers) that “Kimiko’s communication evolves and it comes from a place of wanting to communicate specifically with Frenchie, but also with the rest of The Boys.” She said that Kimiko, like others, wants family connections and friends.

“I love their chemistry, our chemistry” Fukuhara said of both Kimiko and Frenchie and herself and Capon, who shared an obvious camaraderie during the interview. “As we were talking about earlier, Frenchie has a lot of empathy. And that I think that’s what The Female kind of falls in love with because she’s had so much violence and so many terrible things happen to her that nobody in her recent years have shown her the kind of unconditional friendship and love that Frenchie has shown her.”

Capon concurred, noting that whenever he and Fukuhara “did something on set and Jack Quaid was looking at us from afar, he would go, ‘You’re so cute’.”

While the fate of Frenchie and Kimiko’s relationship remains to be seen, because they are bonded by both separate and shared trauma, things will definitely get a little darker (beyond the pitch black humor of the show). Fukuhara noted it was a challenge to play scenes where she had to go to place she’d “never tapped into,” but that it was a fulfilling experience.

“I know her origin story is just so shocking and tragic,” she said, continuing that “you find out what that trauma does to her.” Regarding Frenchie, Fukuhara said that “without that trauma, I don’t think Frenchie would have been as drawn to her. But because he has his own traumas that he’s experienced, he kind of sees a part of himself in her and that’s what catapults him into trying to help her out.”

For Capon, the one other relationship to be more deeply explored is the one between Frenchie and Butcher, who Frenchie feels betrayed by because, in his mind, Butcher abandoned them while they were in desperate straits.

Butcher, Capon said, is a sort of “father figure” to Frenchie who winds up disappointing him. “Butcher being Butcher, he just leaves them to survive on their own,” he noted, adding, “but the [second] season opens up with Frenchie still yearning for the father figure he needs so much and didn’t have in his life that he’s masking himself with humor.”

Amazon Prime Video’s hit series, “The Boys,” returns September 4, 2020, for a second season of mayhem, fun, and empathy, with three episodes being available at once, followed by one-per-week for the rest of the season