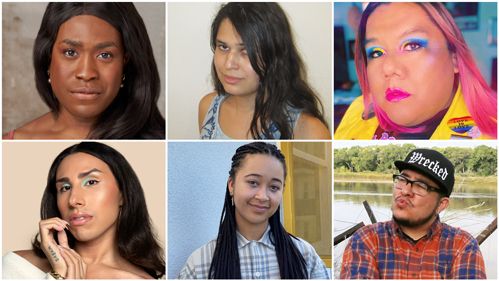 Los Angeles, CA – The nonprofit Sundance Institute launched today the inaugural Trans Possibilities Intensive, a three-day virtual program focused on advancing transgender storytellers of color and their projects. Six artists have been selected for the Intensive which provides a supportive environment to work on their projects, sharpen their craft, develop community, and challenge the obstacles that continue to exclude transgender artists of color. The Intensive is designed and led by Moi Santos, Sundance Institute Outreach & Inclusion and Indigenous Programs Coordinator, and includes guidance from experienced creative advisors including Sam Feder, Yance Ford, Tourmaline, and Ro Haber.

The selected fellows include Ava Davis, StormMiguel Florez, River Gallo, Carol Grant, Mitchell (MiSha) Owens, and Savannah Ward. They were nominated by the Institute’s allied organizations, including organizations working explicitly with emerging transgender artists of color, and peers within the Sundance Artist Programs.

During the Intensive, fellows will participate in a robust schedule focusing on key areas of craft including group exercises, discipline specific workshops, and work closely with established creative artist advisors. The program begins with a free public event on October 18 at 10am PT on Sundance Collab, Beyond the Tipping Point where visionary filmmakers Tourmaline (Happy Birthday, Marsha!) and Sam Feder (Disclosure) discuss their filmmaking processes, the state of transgender representation, and the power of storytelling as an agent of cultural change.

“This Intensive is the result of ongoing and evolving priorities through Sundance’s Outreach and Inclusion work and a year of thoughtful and intentional planning, heartfelt commitment, and a belief in supporting transgender storytellers of color and their stories,” said Santos. “We are honored that the Fellows have chosen to share their artistic journeys with us and look forward to continuing our relationship and building community together for years to come.”

In advance of the Intensive, Moi Santos and GLAAD created a transgender awareness training designed to further knowledge, learning, and understanding about transgender and non-binary people so the Sundance Institute can continue advancing inclusion for transgender artists, employees, volunteers, and audiences in physical and online spaces, as well as through our programming of accurate and authentic representation on screen.

In conjunction with this work, the Institute partnered with the Disclosure filmmakers and GLAAD to build a toolkit geared toward entertainment industry executives and creators seeking to use Disclosure as a resource for trans-inclusive storytelling. It is designed to ignite conversations and enhance the work of professionals providing industry DEI training on trans representation in media, and will be available in November here.

The 2021 Trans Possibilities Intensive Fellows and projects are:
Ava Davis
Ava Davis, also known as the Duchess of Grant Park, is a trans actress,  producer/filmmaker, and writer living in Atlanta, Georgia. She is also an advocate for increasing trans and queer representation, especially that of black and other minorities.

The Waltz: Career-driven Claire has fully transitioned into a woman, and finds an unlikely partner who can help her realize her lifelong dream of learning to waltz, but both find themselves unsure of the others’ feelings.

StormMiguel Florez
StormMiguel Florez is a trans, queer Xicane filmmaker, actor, and lifelong musician, whose film work includes documentaries The Whistle (Producer/Director) and MAJOR! (Co-Producer/Editor). He’s originally from Albuquerque, NM and has lived in the San Francisco Bay Area for 25 years. He lives with his partner and their 3 chihuahuas.

Welcome To Roswell: A middle aged trans filmmaker returns to his father’s birthplace, Roswell, New Mexico to document coming out to his family. His partner’s obsession with the 1947 UFO crash takes him and his film crew in a very different direction.

River Gallo
River Gallo is a GLAAD award-winning Salvadoran-American filmmaker, actor, writer, model and intersex activist. They are the creator and star of the short film Ponyboi (Tribeca 2019) which was the first narrative film created by and starring an out intersex person in cinema history. River is currently developing Ponyboi into a feature film, produced by Ezra Miller. They are represented by CAA and Management 360.
Ponyboi: When a high-profile john expires coitus interruptus, intersex sex worker Ponyboi suddenly finds himself in a fever dream on the run from the New Jersey mob on Valentine’s Day.

Carol Grant
Carol Grant is a screenwriter and Nicholl Quarterfinalist from the San Fernando Valley. Between writing screenplays about queer identities and bodies, she writes for publications like Vice, Indiewire, and Little White Lies. Carol’s stories come from both a trans and a neurodivergent perspective, discovering the thin boundaries between flesh and mind.
Eurydice V: In a decaying Earth, a troubled mercenary must smuggle a young, illegal clone that’s escaped from her creator through a dystopian Mexico to a sanctuary on a colonized moon.

Mitchell (MiSha) Owens
Born and raised just outside of the Navajo Nation I’ve always wanted to tell stories that would resonate with audiences. Whether it be raw, and gritty, or light hearted and comical, I want my stories to remain authentically real by staying true to who I am as a TransFeminine individual.
The Boy from Across Town: After a late night hook up, a small town Drag Performer gets caught up in an old classmate’s involvement with the local drug cartel.

Savannah Ward
Savannah Ward is a Black trans/non-binary writer who’s currently an Executive Story Editor on Cruel Summer, the thriller drama series produced by Jessica Biel for Freeform. In their spare time, Savannah writes Horror features because, “what is more horrific than being a Black, queer, trans person in America?”
Meta: Insecure about his masculinity, Black transgender teen Jake, aims to be a star athlete and transfers schools to run on the Boys Cross Country team. But when he discovers that most of his teammates are a pack of bloodthirsty, toxically masculine Werewolves, Jake must define what it means to be a man for himself.

As a champion and curator of independent stories for the stage and screen, the nonprofit Sundance Institute provides and preserves the space for artists in film, theatre, film composing, and digital media to create and thrive. Founded in 1981 by Robert Redford, the Institute’s signature Labs, granting, and mentorship programs which are dedicated to developing new work and take place throughout the year in the U.S. and internationally, are supported largely through contributed revenue. Sundance Collab, a digital community platform, brings artists together to learn from each other and Sundance Advisors and connect in a creative space, developing and sharing works in progress.
The Sundance Film Festival and other public programs connect audiences and artists to ignite new ideas, discover original voices, and build a community dedicated to independent storytelling. Sundance Institute has supported such projects as Clemency, Never Rarely Sometimes Always, Zola, On The Record, Boys State, The Farewell, Honeyland, One Child Nation, The Souvenir, The Infiltrators, Sorry to Bother You, Won’t You Be My Neighbor?, Hereditary, Call Me By Your Name, Get Out, The Big Sick, Mudbound, Fruitvale Station, City So Real, Top of the Lake, Between the World & Me, Wild Goose Dreams and Fun Home. Join Sundance Institute on Facebook, Instagram, Twitter and YouTube.