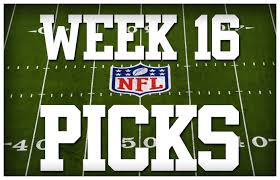 So, what do you guys think about the NFL week 16 picks?! I would love to hear your guy’s thoughts about the picks!