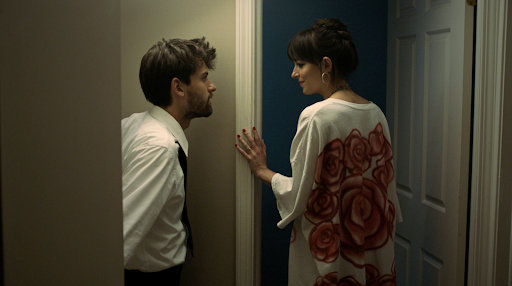 From writer-director and lead actor Cooper Raiff (SHITHOUSE) comes Cha Cha Real Smooth, the story of a New Jersey party starter working the bar mitzvah circuit after college who meets his match in a suburban mother (Dakota Johnson), then begins sitting for her autistic daughter (Vanessa Burghardt), bringing him closer to their family.

Cha Cha Real Smooth premiered at the Sundance Film Festival 2022 and won the Audience Award in the US Dramatic category. The drama-comedy has a very clear voice, that of writer-director Cooper Raiff. There’s a lot of anxious, quick talking. It’s nothing particularly ground breaking but it’s witty and charming enough to make the film a fun watch.

Raiff isn’t Jewish but he attended a lot of bar mitzvahs growing up and he has a fondness for the right of passage they represent. The journey into adulthood for the kids at the bar mitzvahs is contrasted well with Raiff’s Andrew, who hasn’t figured out adulthood at all but is giving life advice to his brother David (Evan Assante) like he understands the meaning of life.

Cooper Raiff is great as the awkward, funny Andrew. He’s in his early twenties and figuring out what to do with his life. He lives on the floor of his little brother’s room and only really knows how to party, hence the party starting job. I’m not sure that Andrew’s personality is too far away from Raiff’s so perhaps it’s not a surprise he handles the character well.

Dakota Johnson (The Lost Daughter, Fifty Shades of Grey) plays Domino, the young mother who is lonely and struggling with her fiancé Joseph (Raul Castillo) often working in a different city. She is pretty good playing someone who is unsure of themselves and what they’re doing in life, but these are characteristics I have seen her play many times. Johnson is convincing with what she is asked to do and she has great on-screen chemistry with both Raiff and Vanessa Burghardt, who plays her daughter Lola.

Cha Cha Real Smooth is Burghardt’s first acting role on screen and she is great in the film. Lola is autistic, as is Burghardt, and while this is important to the story, it isn’t the only defining characteristic. Lola is a fully formed character, more than an autism diagnosis. Burghardt has said herself how unusual this is compared to other roles she has auditioned for. Vanessa Burghardt is a natural onscreen and played perfectly off Raiff and Johnson. I really hope this opens doors for her going forward.

The cinematography by Cristina Dunlap (Am I OK?) is simple and pleasing to the eye. Great composition and lighting. The music by Este Haim and Christopher Stracey (Maid) is just about what you would expect from a small feature about finding your place in the world. Cha Cha Real Smooth is well made all around.

Cha Cha Real Smooth is an enjoyable movie. In trying to defy expectations, I feel like some of the narrative turns didn’t fully add up but I liked the idea of trying to do something different. A lot of these types of movies can get very similar. Cha Cha Real Smooth was purchased by Apple TV+ for $15m at Sundance 2022, so expect to see it made available on that streaming service later this year. I’d recommend checking it out.

Sundance 2022: Rebecca Hall puts on a Masterclass in ‘Resurrection’

Sundance 2022: ‘Call Jane’ is a Solid Yet Unspectacular Film About the ’60s Jane Collective