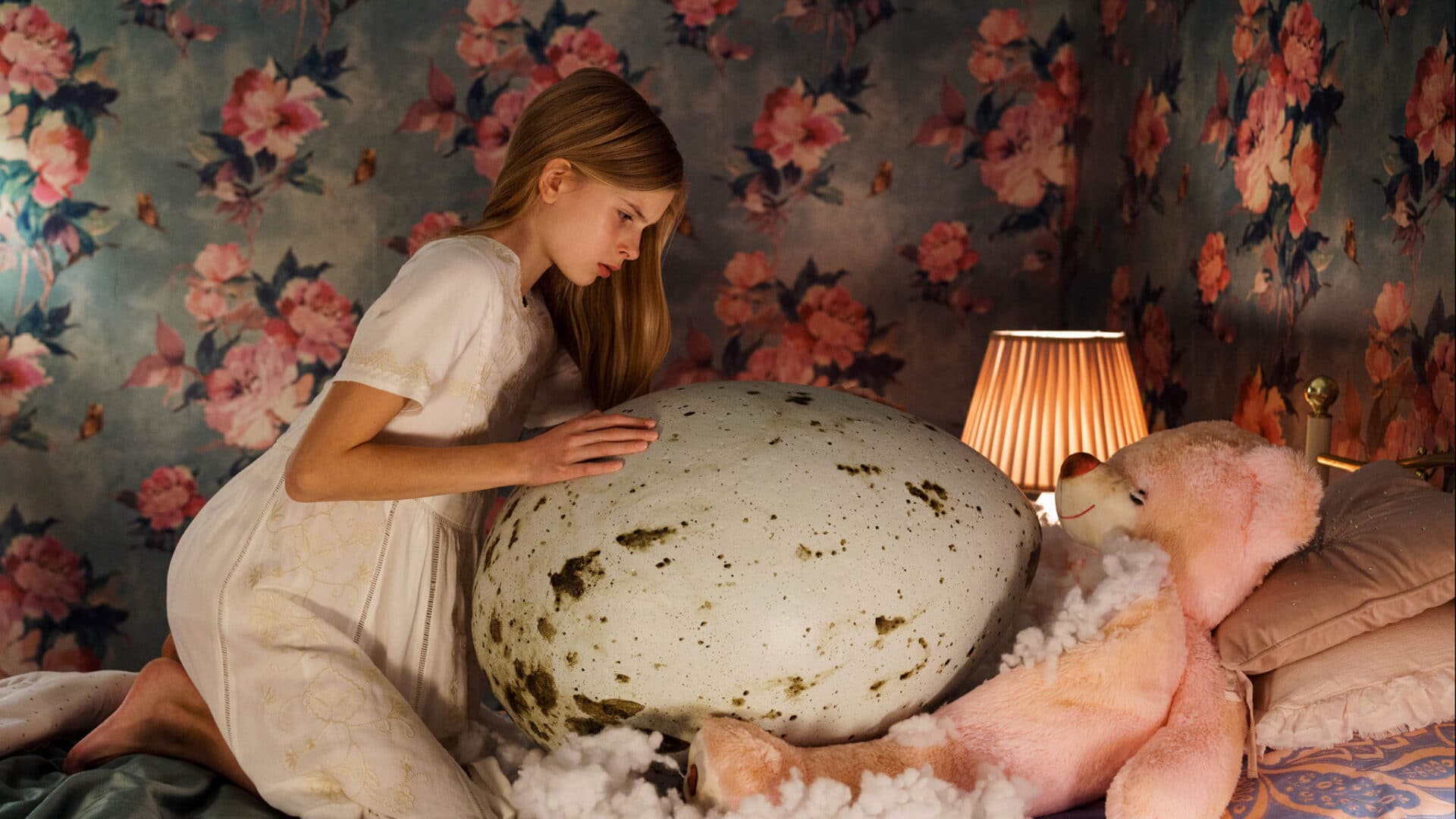 Director Hanna Bergholm’s feature, “Hatching,” unflinchingly shows us the monsters we are, and the monsters we can become. Working from a screenplay by Ilja Rautsi, Bergholm takes the audience on a hell of a coming-of-age journey filled with spectacular practical creature effects and terrifying human beings.

The Finnish “Hatching” begins with Tinja (Siiri Solalinna), a teenage gymnast, stretching as her mother watches her. Tinja’s position makes her look somewhat like a bony egg, foreshadowing what’s to come. She seemingly has a good relationship with her mother (played by Sophia Heikkilä), who comes up and tickles her. Everything seems loving.

Turns out, though, that Mother is an influencer filming the scene for her vlog, “Lovely Everyday Life,” and life isn’t really that lovely in her home. Mother is incredibly selfish, while Father (Jani Volanen) is a weak man who lets Mother dictate their lives. Tinja’s brother, Matias (Oiva Ollila), is an obnoxious clone of his dad. Tinja has no friends because her mother drives her so hard to win at gymnastics. All for their viewers, of course, and not because she wants Tinja to succeed for her own self-esteem. Tinja’s needs are not really her concern.

A horrifying series of events is set in motion when a bird shatters the faux-idyllic shoot, leading Tinja later to discover an egg that needs protection and help so the baby inside can hatch. However, the egg grows to gigantic proportions and what emerges is hideous. Despite the baby bird’s monstrous looks, though, Tinja grows to care for it and dubs it Alli. She hides Alli in her closet and mothers it.

After Tinja befriends the new neighbors’ daughter, Reetta (Ida Määttänen), who turns out to be a better gymnast, things go more awry. Mother doesn’t like seeing Reetta’s superior skills and forces Tinja to practice until her hands are calloused and bleeding. Mother’s family has their online reputation to protect, after all.

Alli also doesn’t like anything that causes Tinja distress. As Alli grows larger and larger, the curtains get pulled further open on the realities of Tinja’s broken home life.

At Sundance, Bergholm revealed they changed the lead character of the story from a boy to a girl because she feels there needs to be more complex females in film. The change works very well here, given the nurturing Tinja does for Alli, and the relationship she has to her selfish, winning-at-all-costs mother, whose idea of relieving stress is to win. “When you win, you don’t have to worry about anything,” she tells Tinja at one point.

“Hatching” devastates with its scathing critique of the way social media warps real-life sensibility in the pursuit of presenting perfection, but its greatest depth is in showing what repressing emotions can do to someone. It’s also a brilliant metaphor for coming of age, as Tinja grapples with the truth of her family’s dysfunction while also caring for a literal monster she feels responsible for. Tinja might as well be invisible for all her family actually cares about her as herself–she is only allowed to be whatever Mother wants. She’s living a teenager’s nightmare, only it’s on-screen for Mother’s followers to praise because they can’t see the horror behind the artifice.

Solalinna is affecting as the shy, bird-like Tinja, and Heikkilä shines as the self-involved Mother (neither Father nor Mother get names). The practical effects on Alli are exquisitely grotesque and a joy to see for folks who enjoy a good old-fashioned monster as well.

“Hatching” makes an excellent addition to the pantheon of horror films dealing with teenage girls growing into their own power, such as 2000’s “Ginger Snaps” and 2007’s “Teeth.” But what sets it apart is its unflinching ability to delve deep into the damage mothers can do to their daughters when they try to live through them without paying any attention to their daughters’ feelings.

Some Disneyland Updates Including the Pirates Ride at New Orleans Square and the Lawsuit Against Disney!