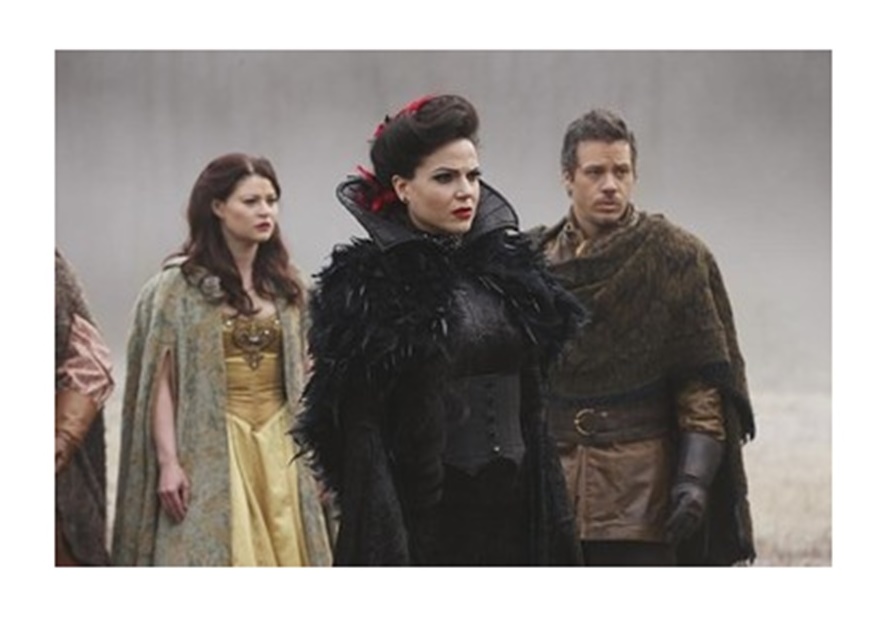 Once Upon a Time finally came back after an almost three month hiatus!  The episode teased us the entire time until the very end with an appearance of the Wicked Witch of the West played by Rebecca Mader. Wicked is here!

Here are my thoughts on the episode:

It was so nice to see Red (Meghan Ory), albeit brief, appear when everyone first came back to the Enchanted Forest.  I thought it was interesting that almost everyone had the same exact outfits that they wore when the curse first when through back in Season 1.  While it was nice to see Aurora and Snow together again, I don’t think it was fair for Aurora to not warn Snow that a powerful person wants to cause trouble for them.

I have to give Walsh aka the flying monkey credit as to how he proposed to Emma. At least he didn’t put the ring in the food, that would have potentially caused problems.  I’m hoping we see more of Christopher Gorham despite the fact that he’s a monkey.

It is nice to see Snow’s optimism again.  She decides that Regina and herself will rule the kingdom together versus still being at odds.  I am glad that Regina does not protest too much to this. You also see further changes in their relationship when Snow convinces Regina not to bury her heart.  Regina was about to do exact same thing that her mother Cora did a long time ago. Regina and Snow do have a lot more in common now that the curse had taken them away from someone they loved.  I think it helped that they were able to work together to defeat a common enemy in Peter Pan.  I definitely noticed how Regina said “no one takes our castle,” after seeing the ward around it.

What was up with Jiminy cricket talking like an insect?  In the past whenever he has communicated with the others we were able to hear him talk.

Regina finally met Robin of Luxley!  The circumstances in which they met is perfect.  Regina has a hard time asking for help, so it makes sense that she would act ungrateful after being saved from a flying monkey to the person that is supposed to be her true love.  I’m looking forward to seeing how their relationship develops.

I am so glad that Hook was able to provide a way for Emma to remember.  It would have been very irritating if we had more episodes of her acting like she doesn’t believe.  We got enough of that in Season 1.  Another irritation would have been to see David, Snow and the others forget their fairytale characters again. I am wondering how Henry is going to remember, as there was not enough potion for both of them. Hopefully we do not wait a long time for him either.  It was cool that Emma put on her infamous red leather jacket for her trip back to Storybrooke.

It looks like the show will be jumping back and forth for us to find out what Regina, Snow, Neal, Belle, and the other characters were up to until Emma and Henry arriving back in Storybrooke.   These characters are losing memories way too much for me. Makes you wonder if that will have a permanent effect on their brain.

Overall I think this was a good way to start the 2nd half of season 3.  Looking foward to seeing more of the Wicked Witch next week!

Of Course You Do… Supes and Wondy #6