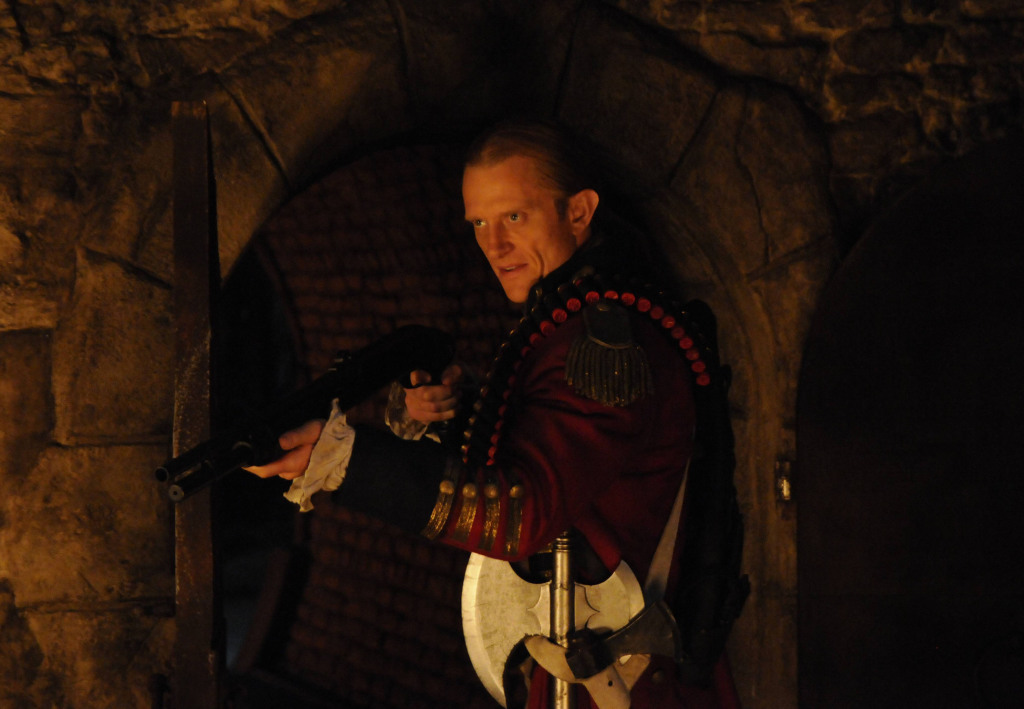 Moloch has grown! Abbie and Ichabod search for a sword! Crane and Abraham still have some issues to work out in the first part of the fall finale of Sleepy Hollow!  On to the recap!

Ichabod becomes frustrated in playing the game “Who Am I” with Abbie because they haven’t figured out what the weapon is that could help defeat Moloch.  Katrina contacts Ichabod through Henry’s mirror to let them know that Moloch is still alive and growing at a rapid pace. She leaves when she hears a noise.   Henry comes in and uses a spell to eavesdrop on Abbie and Crane. Yeah Katrina, that was real smart, using Henry’s mirror to contact your man! The witnesses figure out that the weapon that can help defeat Moloch is called Enoch’s sword aka the “Sword of Methuselah”.  They even find the location from a picture of a snake that looks similar to a river in Grace’s journal.  The picture was also a cartoon drawn by Benjamin Franklin to let all Freemasons know the sword was in what is now Sleepy Hollow.  They leave to go find it.  Henry meanwhile instructs Abraham to find it before they do even though it will be day soon.  Katrina tries to find out why Abraham is leaving.  Clearly upset, he tells her he’s going after a treasure before the witnesses and hints he knows she contacted Crane. 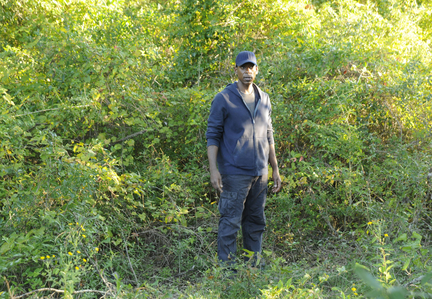 Abbie gets an alert letting her know that Sheriff Reyes set up perimeters around the Canadian border to stop Irving from crossing over.  Abbie warns Jenny via text. Irving reminds Jenny not to text while driving when she reads Abbie’s warning.  There is a checkpoint ahead. Irving jumps out and agrees to meet Jenny on a pier past the checkpoint. Jenny is waiting at their meeting spot when she gets a voicemail from Irving telling her he will stay in town and fight while underground.

Back to the search for the Sword

Abbie recognizes the columns. It was the same place from the dream she had last week about her mother. Headless arrives and they hide.  Crane thinks they should wait until daybreak but Abbie thinks Abraham will get the sword so she goes after him.  Abbie watches Headless chop something from an open brick wall and puts it in his coat.  She makes a noise that has Headless turn in her direction.  When Abraham comes too close to Abbie, Ichabod distracts him by calling his name and running away.  Abraham goes after him and Ichabod hides. Eventually dawn breaks through the clouds immobilizing Headless so much he has to leave.

Crane tells Abbie that he has Abraham to thank for getting him to America. Flashback time! Abraham and Crane are fencing with Abraham trying to convince Ichabod to be his own man and make something of himself in the colonies.  We note that both men are evenly matched with the sword.  Abraham had an interesting quote, “Were you meant to teach history, or make it?”

Ichabod realizes that in order for him to defeat Abraham he has to know himself completely. He also tells of when he caught up with Abraham again in a tavern and sees Katrina again.  Abraham tries to introduce them but Katrina mentions they met already in Boston. Crane points out how Katrina also helped him on his journey to become a witness just as much as Abraham.  Abbie agrees that they have struggled to find themselves since they have become witnesses and knows there must be a reason why it was their destiny to have been chosen. 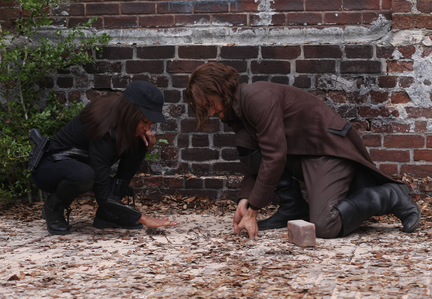 Abraham before retreating took a clue from the brick wall. Fortunately Abbie got a look at it, it was a snake eating it’s own tail, Ouroboros.  It is also a sign of the Knights Templar that means, so above so below.  They find on the ground near where the plaque was some loose bricks. They dig some and find the doors, the handle the symbol of the Knights Templar.  The doors  open up to stairs leading into an underground tunnel.  When Crane and Abbie get to the bottom, they notice several statues.  One was an Englishman.  Several of the statues are posed like they tried to avoid looking at something.  As Ichabod’s light flashes towards the wall, we see something move.  Abbie noticed an ancestor down there too. Ichabod realizes that the statues are real people.  Time to go! Crane tells Abbie not to look back as they rush back up the stairs. When they reach the top they quickly close the door just as something is about to escape. It looks like a big snake.

Crane explains that what they just saw was a Gorgon from Greek Mythology that can turn people into stone when someone looks at it.  Is this a relative of Medusa? Abbie gets upset because several people have been turned to stone, especially some of her ancestors, trying to complete the mission. She feels like she is next to die young.  Crane tries to steer her away from that negative thinking. They will find a way like they always have. As they wonder how they will get past the Gorgon, Abbie has an idea. Use Headless since he won’t be able to see.

Henry opens a box that contains the Shofar as Katrina walks in.  The trumpet that will announce the arrival of Moloch and the end of days.  Henry confronts Katrina about the poison she made for Moloch and they both see a now teenage boy walk past them into the next room. He thinks that Katrina’s humanity is a weakness and denies his deeply.  Katrina comes back with it was her “humanity” that saved his life when her coven tried to kill him.  Henry then brings up that she could’ve prevented all of the heartache if she just let Daddy die. He gloats about letting her use the mirror and now it will be her fault if Crane falls.  Henry is looking forward to blowing the horn.  On that note, Henry lifts up his enchantment and Katrina is able to see the real demon teenage Moloch. 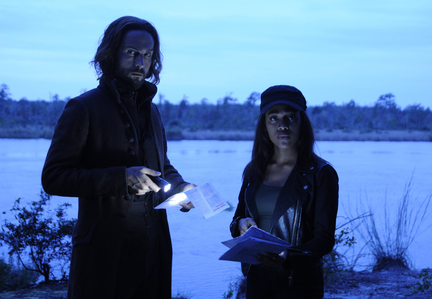 Abbie and Crane wait for nighttime.  Crane made some torches and Abbie brought flares.  Night falls, and Headless comes on cue.  He chases the witnesses downstairs and while Abbie and Ichabod hide, he fights the Gorgon.  Crane views from his phone the battle between the Gorgon and Headless.  Once he feels like the two are focused on each other he signals Abbie to move further into the tunnel.

Fortunately Crane brought torches since the flares were used to get into the tunnel.  They go into a room with several swords surrounding what appears to be a old fashioned bowl stand. Crane will hold off the victor while Abbie tries to play “let’s pick a sword.” No pressure since they only have one shot at it! Headless slices the Gorgon’s head which rolls towards Crane. He puts his coat over it so he doesn’t have to look at it.  I would try to keep it close at hand to maybe use in the future Ichabod.  He is able to see Abraham instead of Headless.  Is that his truest form?  According to the spell in the further chamber it is.  Abraham and Crane have a major fight with trash talk and some harsh truths. Fights can be so therapeutic sometimes! Abraham wanted to be the hero, not the villain and blames Ichabod for that.   When it appears as though the fight will be another draw, Ichabod runs to the sword room.  Abbie by that point picked the wrong sword as all of the others including the one she picked turned into snakes. Yeesh! Abbie finally sees Abraham when he bursts in.  Just as he is about to shoot Crane everyone hears the Shofar blown.  Abraham leaves but not before he belittles Crane and boasts that he chooses Moloch.

Crane thinks there is no hope but Abbie hasn’t given up yet.  Crane notices the  water and notes how water can show reflections of someone. When he dips his finger into the bowl it comes up as oil.  Abbie and Crane share a look.  Crane puts the torch in the oil but it snuffs it out.  Abbie then has the idea that they should do it together which is the advantage they have over all of the other people that went after the sword.  By both of them lighting up the oil, it lit on fire but then they could see the hilt of the sword after the fire goes out.  In a moment very similar to the story “Sword in the Stone,” Ichabod pulls the sword out of  the oil. It glistens and lights up from the light in the opening in the ceiling. “Moloch shall not rise!” says Ichabod with determination.  Meanwhile Henry says it begins with Moloch looking on. Moloch will definitely make an attempt to rise that’s for sure!