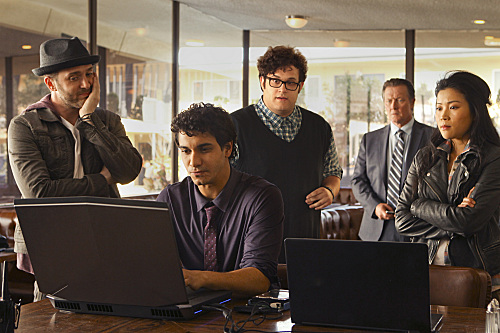 Those that attended the San Diego Comic-Con International panel for Scorpion in July were showed the premiere episode followed by a Q&A with the creators and main cast members. I definitely enjoyed the episode and can’t wait to see more.  Warning: this recap contains spoilers.

Here is the official synopsis of the show according to CBS:

“Pilot” — SCORPION, inspired by a true story, is a high-octane drama about eccentric genius Walter O’Brien (Elyes Gabel) and his team of brilliant misfits who comprise the last line of defense against high-tech, complex threats of the modern age. At last, these nerdy masterminds have found the perfect job: a place where they can apply their exceptional brainpower to solve the nation’s crises, while also helping each other learn how to fit in.

The beginning of the episode shows us the past with Walter as a young kid being taken away by Agent Cabe Gallo (Robert Patrick) of Homeland Security after hacking into NASA. Yep, a kid hacked into NASA! We even see him break out an immunity agreement before they take him away. They tried to make Patrick look young in this scene but it wasn’t quite working. We then jump ahead to present day with O’Brien breaking up with someone while on a job at a diner. He notices a waitress named Paige (Katherine McPhee) explaining why her son Ralph is messing with the condiments to her boss. Walter engages with the boy like they are playing a game. It later turns out that it was chess. I could tell that the boy is a genius just by Walter’s reaction to him.   Walter leaves the diner and heads to his office that looks more like a room at a warehouse. We meet two of O’Brien’s crew, Sylvester (Ari Stidham) and Happy (Jadyn Wong) trying to figure out how to cheat to get electricity since their electricity bills haven’t been paid. It turns out that one of the reasons is that Sylvester gets all caught up in a math equation which causes life to pass him by. Sounds like anyone that gets involved with a novel series or marathoning a TV show. We find the last member of team, Toby (Eddie Kaye Thomas) being chased by gamblers he cheated on. The money he used to gamble was a payment from a recent job. Good grief. Walter starts to lament about his business state when Agent Gallo comes to the rescue with a mission. Walter’s not too happy to see him. Agent Gallo approaches with a situation that he feels only O’Brien and his team can help with. 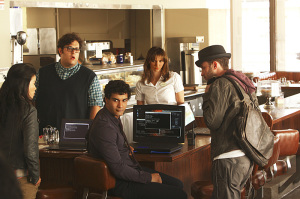 LAX’s air traffic control is out in the dark and they can’t communicate with the planes to make landings. This was caused by an upgraded system with a bug. Darn those upgrades, they sure do screw things up at the worst possible moment! Walter and his team race against the clock (2 hours) to get LAX back online before planes start crashing. Walter figures that the easiest way would be to reboot the system with the old software which should open up communications long enough to land the planes. To help with that they need a wireless signal that’s not going to drop. Let’s go back to that diner near the beginning of the episode shall we? Walter and his team solve the crisis with the help of Paige. It turns out that the solution is not as simple as first appeared. After several mishaps involving air traffic supervisor Brooks not pushing Ctrl-C at the right moment, to the old data tab being corrupted by car speakers, all seemed hopeless. Walter with a small help from Ralph, figures out a more extreme way of getting the old software. It involved speeding through lights and riding up real close to the wheel of the plane to link up the laptop via USB with the plane’s computer system. In the middle of this crisis Paige finds out through Walter that her son is a genius.

After Walter and his team save the day Agent Gallo offers the company a more permanent job with his division in LA. If there is a crisis that needs people to think outside the box O’Brien’s team will help solve it. O’Brien then approaches Paige to join his team to help them understand normal folk during their assignments while he helps her communicate with her son. 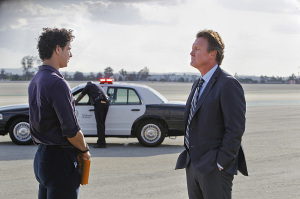 I thought this was a good way to introduce the characters. Gabel is a solid lead as O’Brien. You definitely got a hint of a working history between Walter and Agent Gallo. I think Walter’s design that wound up killing people in Baghdad is scratching the surface and I’m hoping it will be revealed over the course of the season. The audience has hints as to what the team is capable of and how they solve various problems. I’m also looking forward to what kind of story arc each of Walter’s team will have. We already know that Toby and Sylvester worked together before scamming banks. Stidham is endearing as Sylvester. How Toby was able to deduce where the data box was out of 100s as well as figure out who would have a cellphone on in the plane was fun to see! What about Happy? How did she get to be as skilled as she is with engineering and why does she feel the need to be intimidating? I felt chemistry between Gabel and McPhee. I’m getting a will they/won’t they vibe. Also it is great to see Robert Patrick on screen again. I’m hoping we get some back story on him as well.  It was also nice to see a cameo by Ernie Hudson as Brooks, the LAX air traffic supervisor. 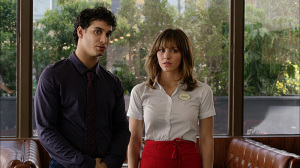 I hope that this show is given the chance since there will be episodes that are more character driven vs. action as mentioned at their panel at San Diego Comic-Con International. The show is based on a real life genius of the same name (Walter O’Brien) so some of these cases will have ring of truth to them.  The show has potential since it’s very different show from the other crime/problem solving dramas that are already out there. Geniuses are cool too!

What did you think of the premiere episode? What do you want to see in the season? Comment below with your thoughts!

Watched the entire pilot episode. It was a struggle the whole way not to turn it off.

1) Planes talk via RADIO! If the radios in the tower quit working due to some software “upgrade”, (not probable, but hey suspension of disbelief) why not just climb into one of the planes on the ground and talk to the pilots. If something, EMP pulse like, hit all the planes and fried all the communications then you drive to another airport or a radio store and buy a handheld radio.

2) You manage to talk to one person on a plane with an analog cell phone and the pilot descends to 100 feet, guess what? All the cell phones work now.

3) Why not land the stupid plane? Assuming that every radio, every computer, every everything all failed at the same time. The pilots of the planes would just land the planes. The sky was as clear as can be, the planes can see each other. Every day in thousands of airports, pilots look out the window and keep an eye out for other planes and then land their plane!

So the hacking scenes were dumb, I’m okay with that because they are dumb in every show. Real life hacking is not very interesting to look at, so you have to spice it up a bit. Make it more graphical. However, I expect common sense things to be gotten most of the time.

If the writers of this show can’t fake common (as in IQ 100 level), how on earth are they going to fake IQ 193 stuff?

Thanks for commenting! I think for the pilot episode they had to keep a suspense of belief. I was also wondering why they didn’t land the plane but then the runway was supposedly short. The initial contact high in the air was what they were aiming for with the analog phone and they still needed to get the connection long enough to download the old software. I’m hoping that it’s more grounded in the coming season. I like the overall premise and the characters themselves. I think the show has potential. ~Natty