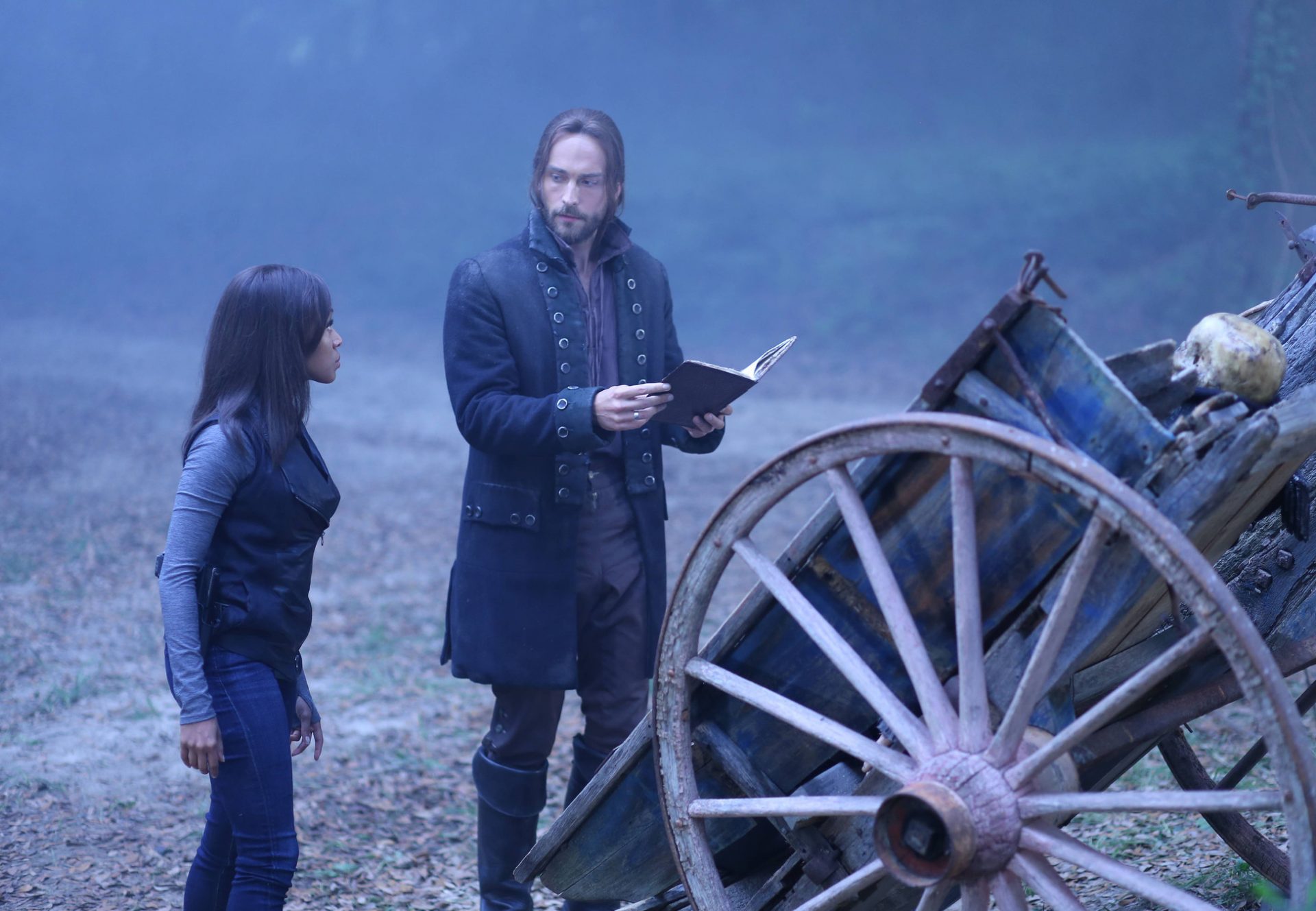 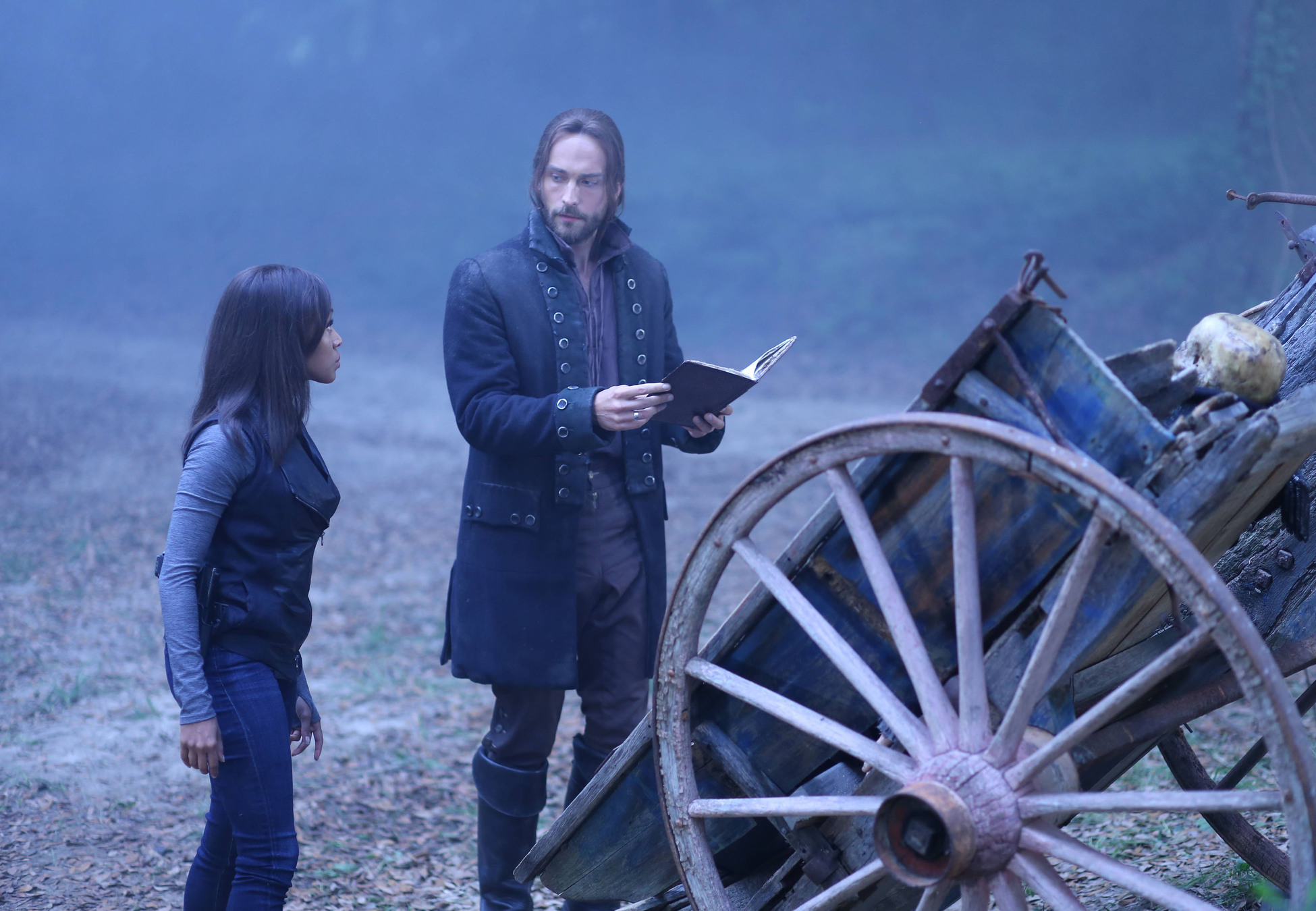 By the end of the premiere episode, Abbie, Ichabod, and Jenny are reunited. There are still a few people missing to make this a complete reunion. Ichabod’s wife, Katrina is being held prisoner by Abraham aka The Headless Horseman and Henry Parrish. Former Captain Frank Irving is still in jail for a crime he didn’t commit. There’s an escape plan for Katrina in the works, did they succeed?

We start off the episode with Ichabod having a nightmare about his wife being forced into a binding ritual with Abraham. According to one of the lost gospels, Codex Tchacos, the ritual exists where an apocalytic horseman can take a human bride. Eww. Abbie figured out the general location of where Katrina is being held. Ichabod helps narrow down the search even further by figuring out how Abraham thinks and where he would go. The Witnesses duo find the house where Abraham is staying. Ichabad and Abbie stake out the joint, Ichabod wants to go in but Abbie cautions they need a plan before charging in there. Abbie thinks Katrina is Ichabod’s weakness and has concerns about him losing focus from his duties in stopping Moloch’s plan. Icky points out that Katrina can help with the war since she is a powerful witch. Was Abbie throwing shade a little bit at Mrs. Crane? And for the record I have not seen Katrina being an all powerful witch so for right now that argument holds no water.

After verifying Katrina’s location, Ichabod, Abbie, and Jenny try to figure out a way to distract Abraham long enough for them to get Katrina out. Referring again to Codex Tchacos, Ichabod explains what is “The Kindred.” Apparently it is a creature made up of different body parts of dead soldiers used to help fight The Horseman. Benjamin Franklin also had information from his journals about the creature and that he teamed up with Katrina’s coven in help creating the creature. The coven created the spell, Franklin provided the body. However, they were missing a body part from the deadly Horseman himself. Fortunately the Sleepy gang did have a body part, the horseman’s head! Several people on Twitter dubbed it “Franklinstein’s monster”, including Abbie herself later on in the episode! Jenny and Abbie are cautious about using the creature since it would be powerful and it could give the Horseman more power. Ichabod manages to convince them to go through with using the Kindred. Abbie mentions that Irving would know where the head is so she goes to see him.

It was great seeing Irving again! He tells Abbie where the head is located, it is in a safety deposit box at a bank. While Abbie is getting the skull, Ichabod winds up telling this loan officer off trying to offer him a credit card. I love Icky’s observations of the modern world and the different institutions that help run this country. He even throws barbs at the wedding industry. 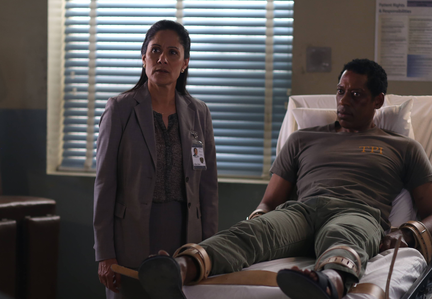 In between while all this is happening, we meet the new sheriff in town, Lena Reyes. She knew Abbie and Jenny’s mom. Reyes acts like Irving did when he initially took over for Sheriff Corbin in season 1. However, Reyes seems to be slightly worse because when Ichabod introduces himself she acts real cold. She wants to bring “sanity” back to Sleepy Hollow. Good luck with that mission. Something tells me she is going to cause more problems for Abbie and Ichabod. She’s already started by throwing Jenny in jail for weapons possession after Jenny picked them up per Abbie’s request. I really wish Jenny tried to meet Abbie at the cabin instead of at the police archives. Abbie and Ichabod have been doing alot of their investigations there and they may need to move eventually if Reyes keeps poking her nose around.  When Jenny said at the end of the episode she hopes that Abbie doesn’t wait 13 years to get her out I was like “ouch” for Abbie but at the same time agreeing with her.

Abbie and Ichabod manage to find the body that Franklin created so they can use the spell to create “The Kindred”. They manage to raise Kindred after a few hiccups with the spell. Icky with more practice, you could become a warlock! Henry summons his knight and the throwdown between Kindred, Headless, and the Parrish’s knight commences. The battle of the Horseman was really cool to see! The Kindred held his own with Parrish’s knight and Headless. He even grunted to Abbie like he was saying “I got this, don’t worry about me.” He rides off into the sunset after the battle. To where, we don’t know. We even don’t know if he’s going to come back and if Icky and Abbie still have control over him. 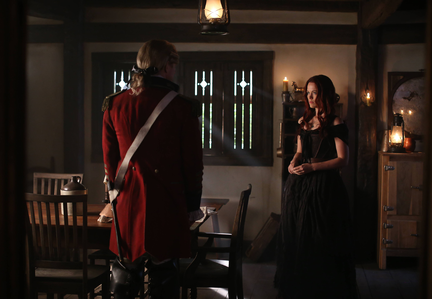 We also see Abraham starting to plant seeds of doubt with Katrina by making observations about Abbie and Ichabod’s relationship and that he wanted to save Abbie in purgatory. Katrina for the time being is not buying it. In fact when Ichabod manages to get to her she tells him that she needs to stay because a) Headless would wreak havoc until she’s with him again and b) Since Parrish and Abraham are working together, she can learn of their plans and also work on getting Jeremy to come back to the good side.   She makes valid points. We get a serious smooch between the wedded couple and Ichabod yet again, has to leave his wife in the hands of the enemy. This is starting to get old. How can I route for Ichabod and Katrina when they hardly spend time with each other? I’m really hoping that changes soon. Henry’s talk with Moloch seems to hint that Henry may be persuaded eventually to move to the good side. The father-son like relationship between him and Moloch is not healthy.

We are not done with Irving guys. We see him again taking a polygraph about the shooting and he’s telling the truth about it being the demons’ fault. He even tried to help the recorder spell it. Reyes sent him to the mental hospital where Parrish walks in as his lawyer. He then has Irving sign something and the pen strikes his blood, so he’s signing with blood. I yelled “Nooo” at the TV screen. Did Irving just sign his soul to Moloch? Will he become a minion like Brooks, or something even more sinister? I really wish that Abbie had at least told Irving Henry’s name so he could be on the lookout. 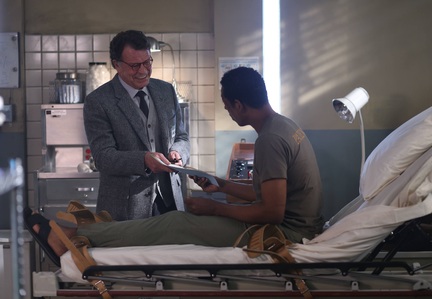 What an episode! Really looking forward to next week! From the clips shown it looks like Jenny’s fears of possession may hold water. What did you think of “The Kindred”? What are your theories as to what Parrish has in store for Irving? Share it in the comments below!

Once Upon A Time S4 Premiere Recap: A Tale of Two Sisters