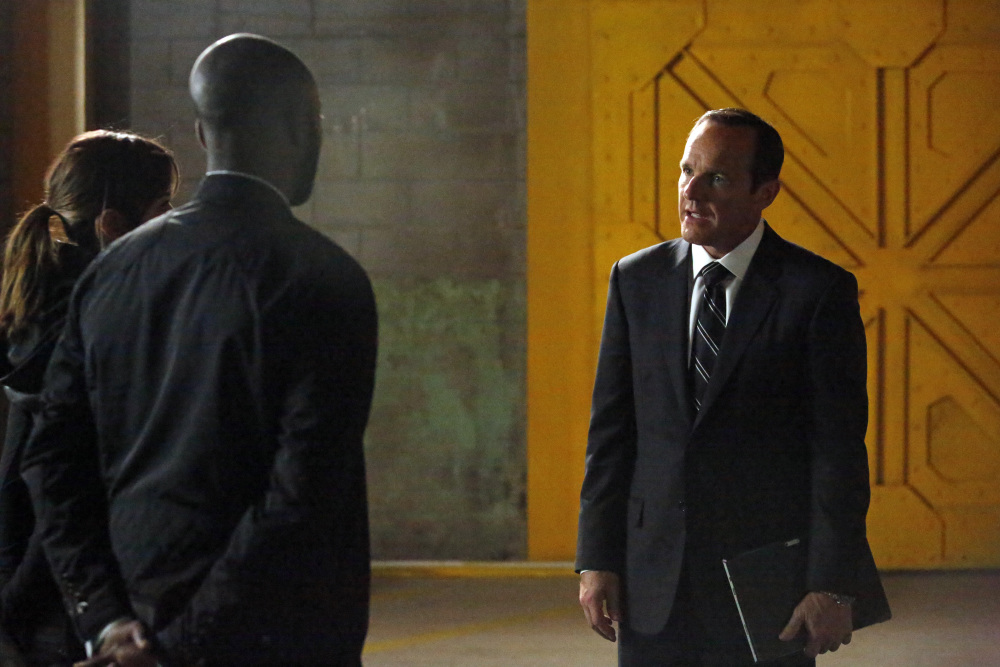 Warning there will be spoilers in this weeks recap of Agents of S.H.I.E.L.D. (I am serious if you don’t want spoilers don’t read!)

Episode 2×02 picks up right after the first episode of this season left off. Lance Hunter comes to realize that everyone else from Carl Creel’s attack on the squad is dead. May comes to rescue him, but he tells her to go before they both get caught by General Talbot. May gives him a device to cut himself out of the flipped over vehicle and is later caught by Talbot who offers him a deal to take down S.H.I.E.L.D.

Meanwhile May is still chasing down Creel and is about to try and take a kill-shot but Coulson stops her and tells her just to keep following. Creel is dealing with problems of his own with his powers and the device he picked up as it seems he absorbed some of it’s power. This is shown when the waitress at the diner he is at touches him and she begins to have the same reaction that Heartley has and dies. Creel leaves as May figures out what is going on.

Back at the base the rest of the agents come back with the plane that they stole so they can get the cloaking going. This leaves Fitz feeling that the rest of the team thinks he can’t do it and he leaves frustrated. He does however find out that he has a way to stop Creel’s powers so he starts working on that in secret with his illusion of Simmons.

Creel meanwhile is trying to figure out what is going on with his powers and tries to contact Hydra only for them to tell him to meet at a new location. He walks out of his trailer frustrated only to be approached by Rayna aka Flowers who also has interest in the Obelisk. She tries to make a deal with him to trade it for a piece of unobtanium which is one of the strongest substances in the world, but Creel just steals it and goes to finish the deal with Hydra. This however was all part of Rayna’s plan as there is a tracking chip in the unobtanium and tips off Coulson and the team to follow Creel.

Hunter also joins the team after losing the tails that Talbot had on him, but he takes out all the other agents so he can take Creel on himself which backfires. Coulson shows up and takes Creel out with the device that Fitz and Mackenzie made from a previous device. In the confusion however Rayna is able to steal the Obelisk and take it to the person who she is working for. She is able to pick up the Obelisk without it killing her, so she asks her boss to show her everything about it to which the man replies “Bring me my daughter and I will show both of you.”

Super Zero: A Fresh Take on The Dead

TVTalk with Natasha and Kimberly Ep 42