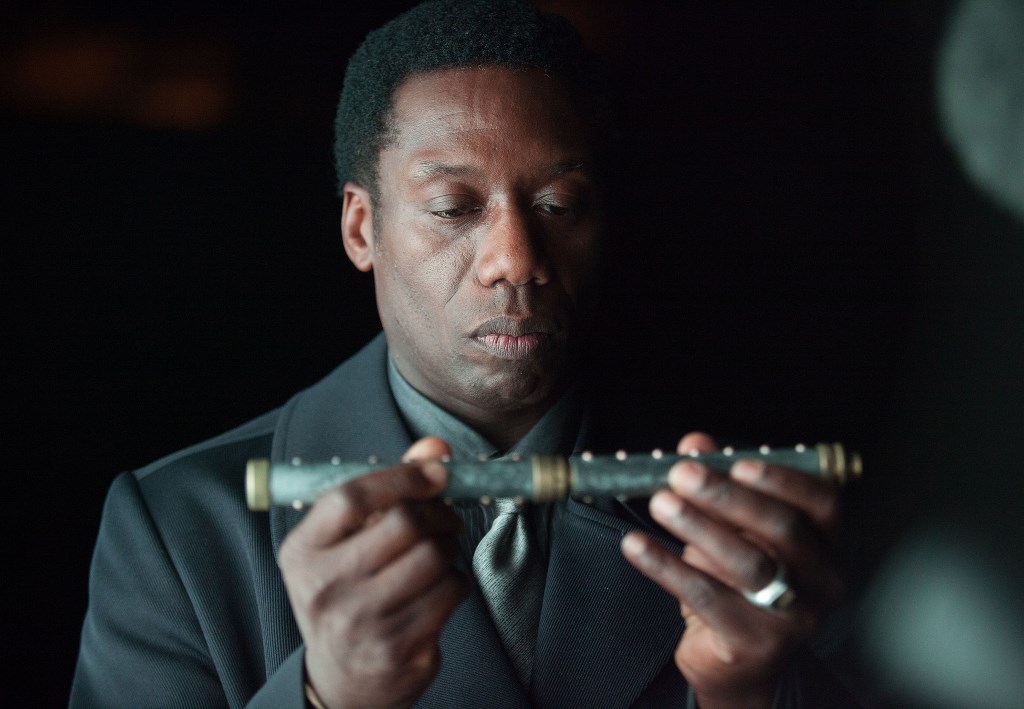 Episode four of Gotham, entitled “Arkham” picks up right where episode three left off, with Oswald Cobblepot a.k.a, The Penguin standing at Gordon’s door like the worst kind of unexpected houseguest.

He obviously knows about Barbara and introduces himself to her as Peter Humboldt, a work friend of Gordon’s.  Gordon immediately gets him out of the house where they have a confrontation in the alley. Penguin offers to spy on Falcone and Maroni for Gordon, warning him, “There’s a war coming.”

Somehow this all ties back to Arkham.  Penguin disappears when a group of kids show up in the alley.

Meanwhile, Councilmen Ron Jenkins and an aide are leaving the office when a strange man shows up in the parking lot. He introduces himself as one of the councilman’s constituents and wants to show them an invention he’s made.  He tells the aide to put it up to his eye and take a look.  A knife shoots out and stabs him through the eye. Councilman Jenkins tries to run away but the man follows him and corners him in a small kiosk, killing him, but not before mentioning that he really did vote for him.

The following morning, Bullock gets the case.  He doesn’t want it…as usual.

Back to Fish Mooney’s establishment, she’s holding auditions for a new singer.  This singer doesn’t give her name, but she sings nicely. She tells Mooney that she’ll “do whatever it takes” to land this job. Mooney asks her,  “Do you like girls or boys?”  This leads to an exercise to see if she can seduce Mooney. It fails.  When Mooney’s muscle, Butch, speaks up in the girls defense, she momentarily loses all composure, spitting out, “I ain’t looking for no girl!  I’m looking for a weapon!”

Back at the precinct, Bullock and Gordon are interrogating a suspect.  Gordon realizes he’s not the guy they’re looking for and leaves the room to find a large box of evidence on his desk.  It includes a Development Proposal for Arkham District.

Meanwhile, the Mayor is having a press conference discussing the plan to develop the Arkham District. He reveals that there is also an opposing plan that will do away with the old Asylum and turn it into a waste disposal area.

At Maroni’s restaurant, Penguin is working at the restaurant observing the goings on closely.

Gordon visits Wayne Manor and speaks to Alfred and eventually Bruce about the Wayne’s plans to develop the Arkham District.  He learns of the opposing plan. It’s possible that Maroni could be behind the deaths. Gordon receives a call from Bullock that Councilman Zeller has been abducted.

It‘s now nighttime as a panel van drives into the old Arkham Asylum. It’s the same guy from the parking lot murder of the first Councilman and his aide.  This time he has another Councilman in a barrel. He pours gasoline on the man and sets him on fire.  Cut to Arkham Asylum during the day. It’s now swarming with cops, investigating a still smoking corpse.

Gordon thinks that Falcone and Maroni are trading shots, killing each other’s people. Bullock wants to know where he’s getting his information from all of a sudden.  Before Gordon can answer, Nigma shows up to show what he’s found out.  He explains that the same person is killing the politicians.  Gordon and Bullock begin to wonder if they have a hitman who is working for both sides.

Back at Maroni’s restaurant, a group of men sit in a backroom counting money. Penguin is watching from the doorway and gets caught by the manager.

Bullock and Gordon visit an inmate by the name of Minks at Gotham Penitentiary. Minks tells them about a man with a spike who goes by the name Gladwell. He also tells them where he works. 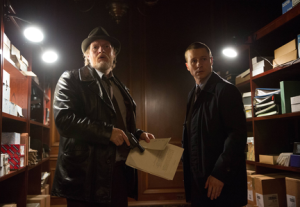 Bullock and Gordon now have a suspect. They go to see Gladwell at work.  He sees them coming and sneaks out to hide in the supply closet with his spike. Gordon looks around and notices strange movement in the closet. He goes to investigate, drawing his gun. At the last second Bullock calls Gordon out to see something at Gladwell’s desk. Bullock and Gordon both hear something in the closet and enter it, guns drawn. A woman comes out startled, dropping a box of paperclips.

At Wayne Manor, Bruce is having a nightmare. Alfred wakes him up and checks on him. Bruce wants to see the Arkham plans.  He wants to know if there‘s a connection between the councilmen murders and the murders of his parents.

At Maroni’s restaurant, a group of men with guns storm the building and rob it, taking whatever money is being held in the back room. Maroni’s men show up to find a bloodbath and the money missing. They continue searching and find Penguin hiding in a walk-in, holding a bag of money that he saved. He starts to explain what happened during the robbery, but they tell him to “save it for the boss.” 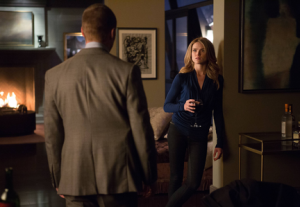 Gordon comes home early. Barbara accuses him of having secrets because of his long work hours.  They get into an argument and it’s finally revealed to him that she and Montoya had a relationship that lasted for a year before she was with Gordon.

Maroni is now at his restaurant and he is angry about Falcone’s hit. He wants to hit him back, “in the mouth.” He speaks to Penguin about him saving the money.  To thank him for saving the money, he gives Penguin a promotion as restaurant manager.  He looks down at a pool of blood covering a table

Gordon and Bullock find out that Gladwell is not a real person. Well, not living anyway. The real Gladwell is dead. He’s been dead for five years. The murderer has assumed his identity and is living as him. Bullock decides to follow up on the case on his own without Gordon’s help.

Mooney is still holding auditions. This time it’s a beautiful young woman named Liza. She asks her the same questions as the previous woman. This time it works out much better.  As Liza walks away, Bullock walks in. He begins to ask about Gladwell. Mooney begins to share how she really feels, telling him that Falcone is old and weak. When Bullock starts to protest, she tells him not to worry about  because she always has a plan B.

Penguin calls Gordon to tell him that there is going to be another hit. Gordon has a realization and gets a list of officers working protection that night.  He knows who the next target is: the Mayor.  When Gordon gets to the Mayor’s house, he sees that all the police are gone. No one is watching the house. Gordon goes inside and tells the Mayor that they have to leave as soon as possible.  Outside, “Gladwell” walks up and begins to assemble his spike weapon. 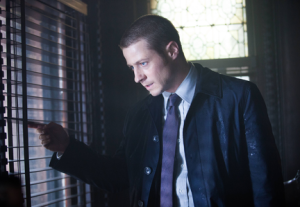 Gordon opens the door to leave but is hit by Gladwell, who disarms him.  Gordon and the Mayor run back into the house, hiding in a locked room. Gladwell uses Gordon’s gun to shoot through the lock on the door. They wrestle as Gladwell tries to move the spike within range to stab Gordon.  Bullock enters and threatens to shoot Gladwell. He backs off…but just for a second. Gladwell lunges at the Mayor. Both Gordon and Bullock open fire, killing Gladwell.

Later that day, Gordon is back at the precinct.  Barbara is there to see him.  She is still asking about Cobblepot.  She gives him an ultimatum.  “You either let me in, or you let me go.” The long pause is her answer. 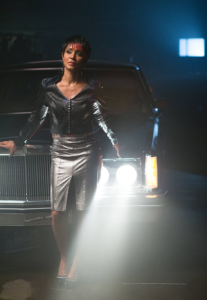 That night Mooney is meeting with the two women from the auditions in a large hangar. She tells them, “I like you both, but I only have one opening. You’ve got the talent. And you’ve got…something else.  I can’t decide. So you two will have to do it for me.”  CATFIGHT! Liza is vicious!!!!  The fight is over pretty quickly. While the other girl lies unconscious on the ground, Liza walks up to Mooney and asks, “So when do I start?”

The next day, Penguin shows up at an old apartment. As he opens the door three men point guns at him.  They relax when they realize who it is.  It turns out they were the ones who robbed the restaurant, and Penguin was behind the whole thing all along.  He offers the men some cannoli.

At the precinct, Gordon is watching a press conference. The Mayor is explaining his decision on Arkham Asylum. The land will be split between Maroni and Falcone.  Low income housing will be built, and the asylum will be retrofitted.

Gordon meets with Bruce.  He doesn’t see the compromise as a good thing. “Everything they’ve worked for is now falling into the hands of criminals.” “Do you believe Gotham can be saved?” “I believe it’s worth trying.

Penguin is still at the safehouse.  Three dead bodies lie on the ground around him.  He gathers up the money from the robbery and shuts the door.

We’ve had four episodes now and I honestly feel that the show is slowly getting better with each episode.

What do you guys think? Leave your comments below.

If you want more detail, the episode will be discussed on this week’s DCTV Podcast.