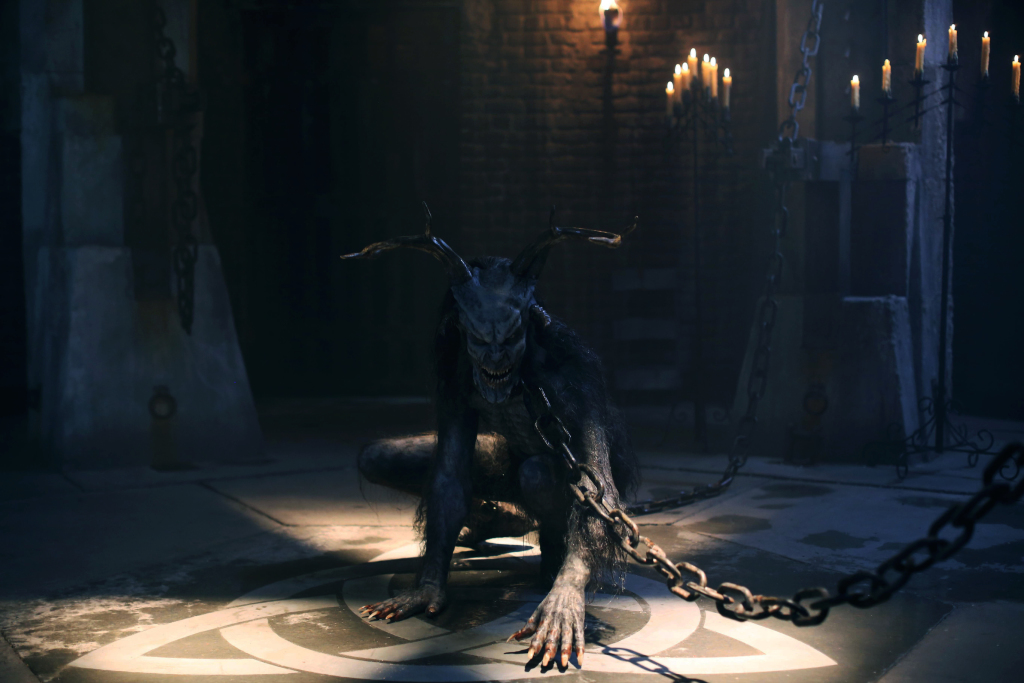 Ichabod Crane lets his hair down and tries out yoga this week on “And the Abyss Gazes Back.” This episode was chilling and I think the special effects done on the creature this week was well done.  I thought it was creepy for sure! I loved Hawley’s one liners! What happened at the end goodness gracious! On to the recap! 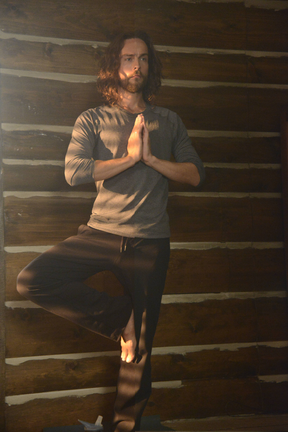 Crane attempts to relax by trying yoga with Abbie. He has to stop when Abbie mentions strengthening the buns. He calls his bottom double juggs.  Crane and his sayings! We get serious when Abbie gets Crane to express in a most calm manner his anger and disappointment in Katrina after their last encounter.  Since yoga didn’t relax Ichabod, Abbie takes him to the bar to have a drink.  I liked the toast Ichabod gave to George Washington that he stole from Benjamin Franklin. Abbie cheers with “Namaste.”  There’s a scuffle in a section of the bar.  Abbie reluctantly goes to calm things down with Crane following.  One of the people that appeared to be scuffling is none other than Joe Corbin (Zach Appleman), deceased Sheriff August Corbin’s (Clancy Brown) son.  He gets kicked out.

Abbie tries to talk to Joe, who got honorably discharged from the Marines after what happened to his platoon in Afghanistan . He holds Abbie responsible for his father’s death.  She tries to explain what happened that night but she chokes.   Joe gives Abbie the cold shoulder and leaves.  We later see some guys near a fire having some beer in the woods Pioneer Point at night. A creepy creature is lurking in the background. Not good. We then see Abbie and Crane driving around town. Abbie mentions that Joe and his deceased father were estranged. Abbie used to babysit Joe and describes how he used to wear Superman pajamas telling her he would save her. I love that Abbie has been teaching Ichabod about superheroes when he tried to guess who Superman’s secret identity was and mentioned Peter Parker as the “arachnid fellow.”

The police dispatch radios an occurrence at Pioneer Point and mentions Joe’s license plates. Abbie responds that she will investigate.  Ichabod and Abbie arrive at the crime scene in the woods almost hitting the creature. They find one of the guys that was with Joe dead in the truck.  Another one has his insides scooped out several feet from the truck.  They find a shocked Joe alive near a tree.  He murmurs that “it’ll kill us all.”  Abbie later questions Joe at the hospital to try to figure out what happened. Joe keeps tight lipped and gives Abbie flack about his father spending more time with her instead of him.   He does open up slightly about being the only survivor at his platoon. 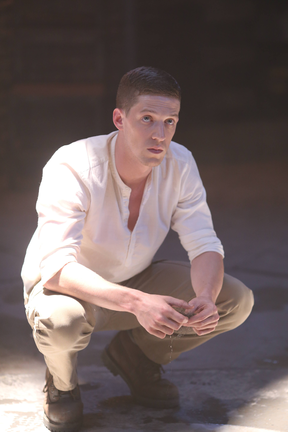 Crane gets suspicious of Joe after he comes away without a scratch. Abbie and Crane try to compare what happened with Joe that night and what happened to his platoon.  According to the report Joe’s C.O. sent to Abbie the men died similar as the men at Pioneer Point.  Ichabod remembers hearing about famous explorer Daniel Boone’s brother Squire having the curse of the wendigo.  The human turns into the creature when the thirst for blood is activated from seeing a cut.  The creature can turn back into human after it eats human organs.  Yuck.  Ichabod mentions that Daniel Boone tried to get a cure from the Shawnee tribe.  They figure that Joe is the wendigo.  They are about to head back to the hospital when Abbie gets a call saying that Joe checked out.   They go to his apartment to try to find clues as to where he went. They find Corbin’s will with a coded message which included coordinates to Pioneer Point.  We see Joe digging until he pulls out a box with weird markings.

Abbie and Crane find Joe but he runs away with the box.  Ichabod manages to catch up with him. After a brief struggle Ichabod starts bleeding, which triggers Joe becoming the wendigo.  Ichabod and Abbie run towards her car.  Abbie gets a tranquilizer gun and starts shooting at the wendigo.  Just when it tackles Crane, Abbie manages to get enough tranquilizers in him to knock him out.  The creature lands on top of Ichabod drooling. Ewww.

The wendigo is chained up in the masonic cell with Hawley and Abbie looking through the two way mirror.  Hawley mentions that he needs to dig a little more to see if there is a cure.  I like how Hawley calls the creature “Wendi-Joe.” He reassures Abbie that they will figure it out.  Hawley gives Abbie this longing look that Jenny catches when she enters the room but she keeps cool. Jenny was able to steal some fresh organs from a med school.  She cautiously feeds it to the wendigo, who turns back into Joe.

Joe explains that Afghanistan was the first time he turned. He didn’t realize that blood was the trigger until he killed when he got back. While in Afghanistan, he received a letter in white powder.  Ichabod immediately thinks of the dusty human bone from the Pied Piper laced with dark magic.  The letter said that he was cursed and that he had to trade in his inheritance to an address in order to get cured.  When he mentions that the address is Fredricks Manor they figure that Henry was behind it.  They find out what was in the box Joe dug up.  Ichabod explains that its Jincan, a powerful poison that hails from Southern China.  The world’s deadliest creatures are sealed into a container devouring each other until their insides are concentrated into a deadly toxin.   That’s bad.   They know that Henry is going find Joe eventually so decide to find a cure before that happens.

Time for a Cure! 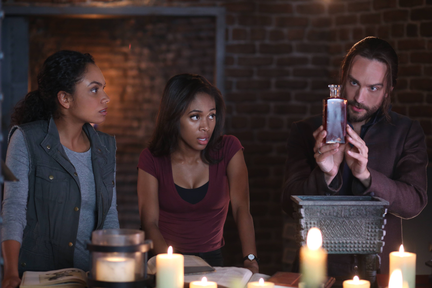 The urgency to find the cure is heightened when Abbie finds out that there are four transformations with the cursed wendigo, the fourth one being permanent.  Joe has already turned three times. It turns out Hawley knows some Shawnee that could help.  Abbie forces Ichabod to go with Hawley to talk to them at a mechanics shop.  Hawley initially starts the conversation with the leader, Big Ash.  When Big Ash gets upset with Hawley for selling a tribal mask, Ichabod is able to smooth things over by mentioning that Hawley will return the mask for their help for a Wendigo cure. He brings up the redfox foot on one of the motorcycles and Squire Boone which gets Big Ash’s attention.

Abbie and Joe have a heart to heart.  We get a flashback when Joe asks when Abbie decided she wanted to turn a new leaf.  It was a conversation with Sheriff Corbin about his son. Joe felt like he was different and didn’t matter but Abbie explained that his father just loved helping people and was proud of him.  That’s why he gave him his legacy. Abbie promises to not give up on him. Henry crashes the special moment by demanding the Jincan.  Initially Abbie says no and Jenny backs her up by holding a gun to one of the henchman’s head.  Henry warns about a bloodbath.  Joe offers the Jincan and goes with Henry, despite Abbie’s protests, so he can get his cure.  Well Henry screwed Joe after he got the poison by cutting Joe so he can transform for the fourth time. Oh no!  He even mentions that he can serve Henry now! Gah! 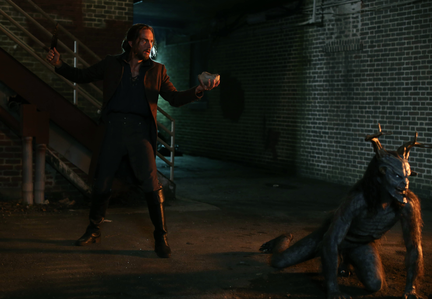 Joe is now missing again.  Crane and Hawley come back all late with a half skull that has a ceremonial chant written on it and an obsidian knife.  They have to cut Joe or the Wendigo with the knife.  Drops of blood need to be in the skull to perform the chant. If the chant is not performed before Joe makes his kill, then unfortunately they would have to stab him with the knife in the chest.  Ichabod and Abbie cut themselves to lead them to an alleyway where Jenny and Hawley have set up a trap for the beast once he enters.  Jenny and Hawley have a brief conversation about elusive prospects which seemed to be code for are you interested in someone from Jenny.  Hawley doesn’t answer because they have company!  The beast rushes at Abbie trying to attack but she eludes him.  Crane is able to knick the beast and starts the chant.  Initially it appears as though it doesn’t work and Abbie insists on not giving up. She’s proven right when the wendigo turns back into Joe.

Abbie shows Joe the head office where the gang does the majority of their investigations. Ichabod is off in a corner playing an online video game talking trash after getting fragged.  Joe tells Abbie that he wants to help protect people like his father.  He asks Abbie for a letter of recommendation for Quantico.  Abbie is touched and says yes.  I hope Joe comes back as he would be a great ally!

Is there hope for Irving?

Henry sees Irving who is still upset about his soul being sold to Moloch.  Henry describes it as bartering for his services then owning Irving’s soul when he dies.  Irving vows he will find a way around it. Henry tempts him by killing Gil Everett (Michael Harding), the drunk driver that paralyzed Irving’s daughter.  “When one gazes long enough into the abyss, the abyss gazes back.” I got chills when Henry said that.  I think Irving is definitely considering Henry’s offer from the murderous glares he’s giving that guy.  Irving later talks with Everett to see if the man regrets what he did.  When he doesn’t, Irving almost chokes him until he replays what Henry told him earlier about not becoming the monster.  He later calls Abbie (finally, some communication) to let her know that Henry has his soul. He has faith that she will be able to help him.  She vows to find a way to get his soul back.  Here’s hoping that the witnesses can help him.  Ichabod feels like he has to fight for his son despite all of the evil shenanigans he’s cooked up.  He still believes as well as Katrina that there is still good in Henry.  We’ll see about that! 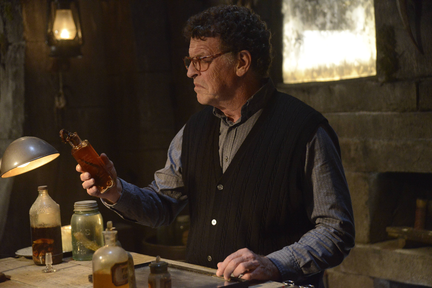 Henry uses the Jincan to create a spider. The red looking spider then crawls to Katrina’s bed and pops into her mouth, waking her up wondering what the heck just happened.  This is why I keep my mouth closed during sleep.  I had to gag at that scene. Since this is a really bad poison, no telling what it will be doing to her insides by next week.  From the previews the witness gang are trying to find a cure. Henry also reveals that through Katrina he’s trying to raise Moloch! Katrina’s in regular clothes? Say what?

What did you think of the episode?  What are you looking forward to seeing next week?  What has Abraham been up to lately? Sound off in the comments below!