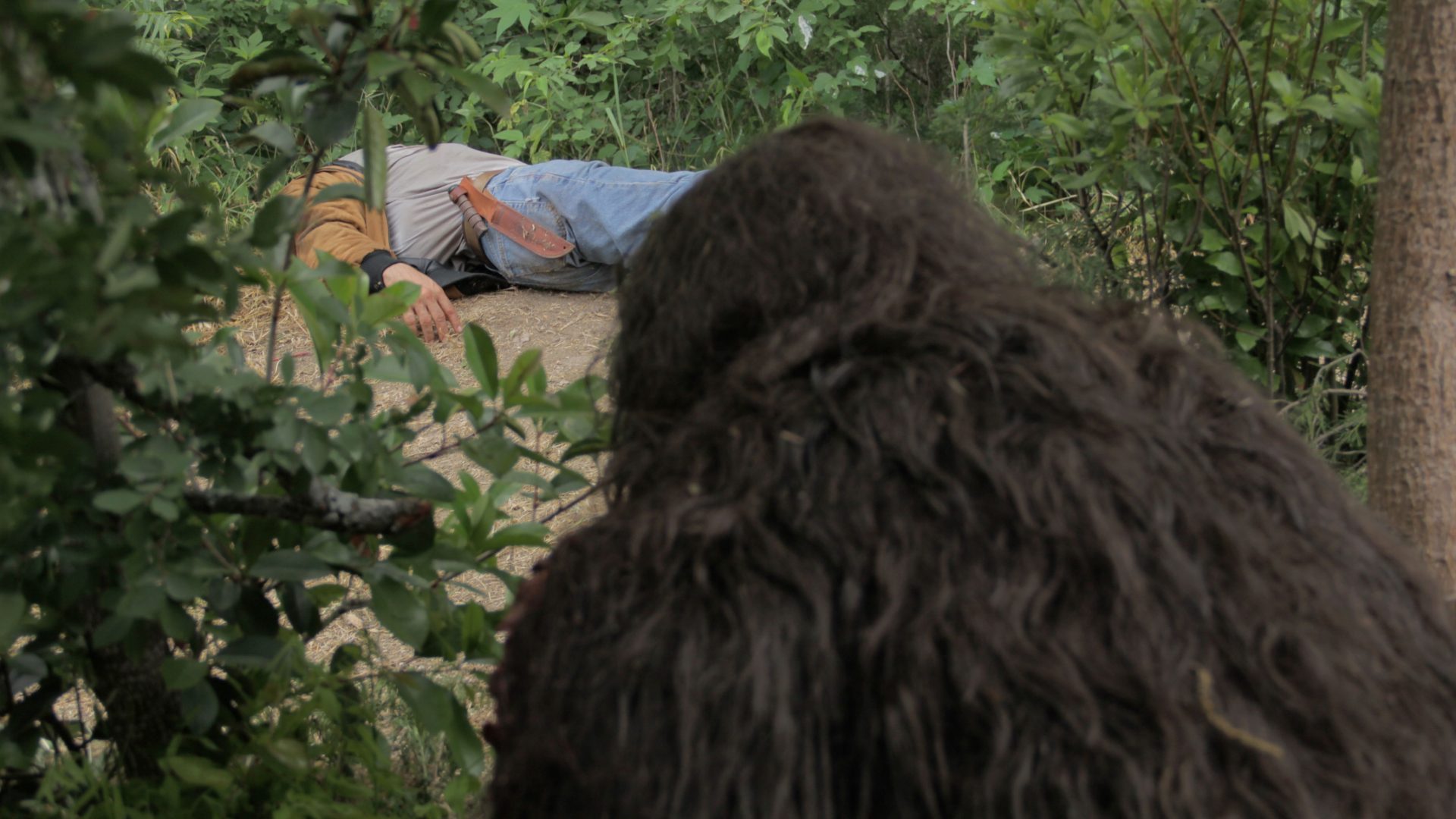 Exists, the new horror feature from director Eduardo Sánchez (The Blair Witch Project, Lovely Molly) and which won the Midnighters Audience Award at SXSW 2014, is a basic tale of a group of friends who go to a cabin in the woods for a weekend of hijinks and instead are attacked by a rampaging Sasquatch.

Yes, this is a Bigfoot movie.

What sets it apart from other Bigfoot movies is the intensity with which the action is presented, aided by excellent sound design and Sánchez’s sure-handed direction of the found footage conceit.

The premise is quickly established. Brothers Matt (Samuel Davis) and Brian (Chris Osborn) take Matt’s girlfriend, Dora (Dora Madison Burge), friend Todd (Roger Edwards), and Todd’s girlfriend, Liz (Denise Williamson), to their Uncle Bob’s cabin in the Texas Big Thicket. They fail to mention, however, that they don’t exactly have Bob’s permission, having stolen the cabin’s keys, and that Bob doesn’t want anyone up there because he believes there’s a Sasquatch in the woods.

On the way up the dirt road to the cabin, the group has an accident, hitting something in the dark but not knowing what it is, despite capturing a lumbering, hairy, very tall figure on video and hearing strange noises in the woods. They proceed to begin their weekend of fun, filming themselves doing stunts on their bikes and playing paintball.

Just as quickly as the premise is established, the source of the mysterious animal noises they’ve been hearing makes itself known: Bigfoot is pissed and looking to take it out on the group. The bulk of the fast-paced film is Bigfoot’s attacks on the group and how they try to survive them.

The story is presented through Brian’s many lenses; a budding videographer, he sets up GoPros on his friend’s helmets and bikes, as well as stationary cameras around the cabin and environs. He also has some handheld cameras, all making for a very plausible reason so many different angles and parts of the story are captured, even when the group isn’t together in one place.

It’s the plausibility of the “surviving video” that aids in drawing attention away from the found footage aspect; in fact, there is no title sequence stating the film is found footage, as most other films in this subgenre have (including Sánchez’s previous efforts). The use of GoPro cameras adds extra immediacy to the point-of-view shots, helping the audience to identify with the plight of the characters.

What’s really amazing though, is the intensity of Sasquatch’s attacks and the palpable fear produced through the film’s incredibly effective sound design. From Sasquatch’s piteous howls to a loud thrumming accompanying the most violent scenes, Exists ratchets up the terror felt by the protagonists with almost literal heart-pounding sound. Coupled with the sometimes claustrophobic point-of-view shots, the effect is deliriously terrifying.

Best of all for horror fans, the scares are legitimate, including one jump scare that induced a few screams from the audience (this reviewer included).

The cast is likeable, making you care about their fates even though their traits are briefly sketched in before the terror ensues. It would have been nice to have a few more moments to get to know them before they become Sasquatch fodder, but so be it. Sasquatch itself is given sympathetic qualities, especially once the reason for the rampage is revealed, making for a well-rounded, emotional outing.

Overall, Exists is worth living through. It’s currently in limited release in a few cities, but available on demand in more markets. Check https://www.facebook.com/existsmovie for more information.

Nathan Fillion will be in GoTG, but who will he play?