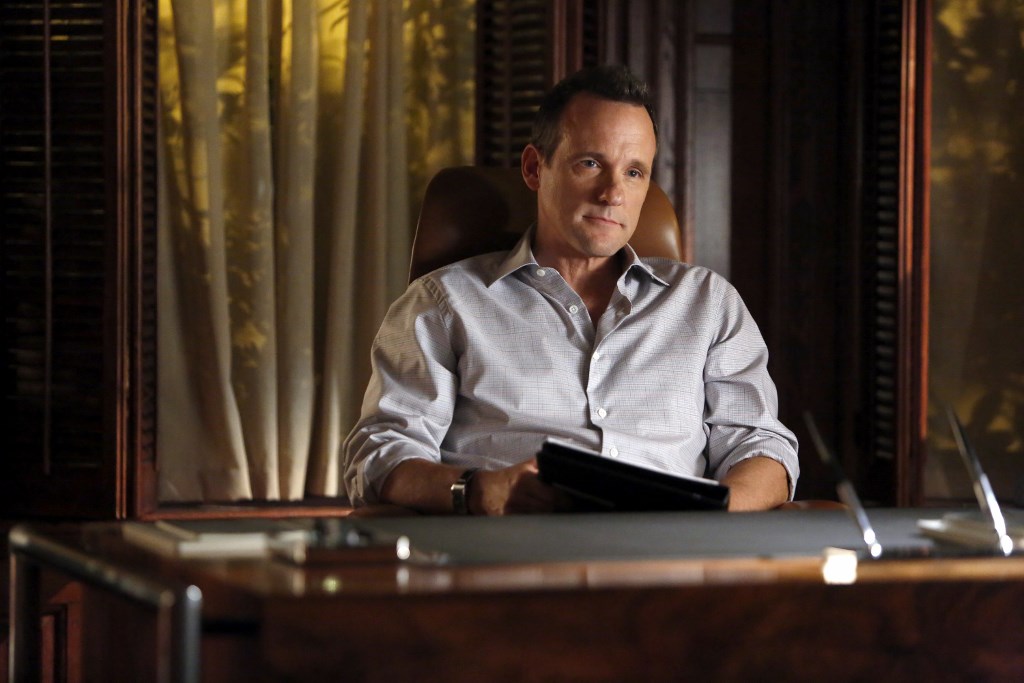 Sam is in big trouble and Laurel shares a hot smooch with Frank this week on How to Get Away with Murder! Thanks to Tracey A. Bellomo for writing this week’s Laurel centric episode with a sprinkle of Annalise and Sam drama!  I like how the episode title “We’re not Friends” was used throughout.  Let’s breakdown this recap! 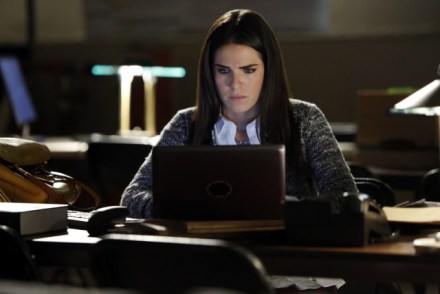 We see Laurel’s view of events after the murder.  The show flash forwards to when Laurel, Wes, Connor, and  Michaela are hiding in the woods when Frank calls Laurel.  Michaela demands to know why Frank’s calling her. Laurel admits that she slept with him which is probably why he’s calling and it has nothing to do with their current situation. Connor asks Laurel if she slept with him while still with Kan (Arjun Gupta) and she confirms.  I thought it was interesting how everyone was surprised by this news, especially Connor and Wes. It’s like it came out of left field for them.

Later when they have the fire going, Frank calls again.  Wes suggests answering and Michaela explains it strengthens the alibi since he would be able to hear the bonfire going on in the background. Laurel answers and Frank is begging her to forgive him and he will do anything it takes to make it up to her. Apparently he lied about something. When Frank emphasizes doing anything Laurel cryptically says, “it’s too late.”

When Michaela realized her ring was missing, they help her search for it in the woods. It’s brought up that Michaela still needs to return the trophy to Asher’s.  Laurel offers to do it since Michaela is concerned about finding her ring.  Connor’s wondering how Laurel will return it. She figures out a way by going to Frank.  Something tells me he’s going to regret saying he’ll do anything for her.

Case of the Week + Laurel and Frank 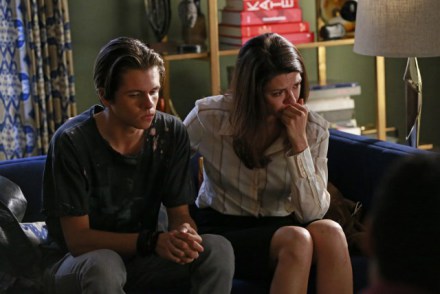 Professor Keating is teaching how to pick a jury that can help the defense get their client off.  Laurel showed some spunk when Annalise assumed she was showing off and Laurel was just giving an example about stealth jurors. Each of her star students go over the types of potential jury members Annalise could be dealing with on her current case. The case involves teenager Ryan Remini (Julian De La Celle) who shot and killed his abusive father who was a police officer.   Annalise mentions the police and the D.A. will try to sway public opinion against her client by labeling him as a sociopath.  Annalise’s strategy is to try to pull the emotions of the jury members so they acquit Ryan despite the evidence.  I liked how the show handled the process of selecting the jury overall as it coincided with the class lesson.

Annalise has her students find out anything about the jury that could help them get a “not guilty.”  During the trial Laurel keeps a jury chart noting when a jury member seems to lean towards the defense.  Connor helped dismiss one of the jurors when he used a sexting app called HumpR to anonymously contact one of the  jurors who showed bias against the defendant. I did enjoy the scene with Michaela, Connor, Asher, Laurel, and Wes when Connor’s sexting is brought up.  There is still that tension between Michaela and Connor while Asher still brings in the humor. 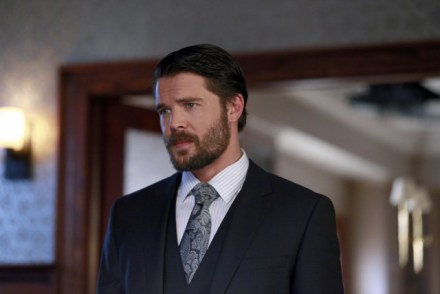 Jury nullification is initially brought up during a conversation between Laurel and Kan.  When she approaches Frank about it, he of course thinks it’s a bad idea.  She takes the chance anyway and proceeds to print off information and casually leaves it on a bench at the courthouse for one of the jurors to see.  She tells Frank who of course tells Annalise but he doesn’t reveal who it is.  While Annalise has her suspicions she can’t get in trouble if she doesn’t know who did it. She thinks on her feet and proceeds to leave an anonymous tip about jury tampering.  The case is declared a mistrial.  A win for the defense, especially since Ryan gets probation, counseling, and community service!  Asher surprisingly gets a little emotional about the results. What’s up with that Asher?

Laurel doesn’t appreciate Frank not spilling to Annalise that it was her so she can take the credit for the defense win. They get into a brief argument and end it with a hot kiss! Laurel manages to stop it going any further and reminds both of them that she has a boyfriend. She then goes to have sex with Kan to get her attraction to Frank out of her system.

Wes approaches Annalise after class about turning in the phone to the police so they can find out who is in the photos. Annalise says that they may not turn it in at all. Wes brings up the fact that they can introduce a new suspect but Annalise counters that Rebecca had Lila’s phone which could implicate her further. Annalise gets harsh on Wes when he persists about trying to find the guy.

During Annalise and Wes’s conversation, we switch back to where we left off last week when Annalise started confronting Sam.  She wants to know as much detail as possible.  Sam explains that the affair started in the summer and they had sex at least 6-7 times mostly at his office as well as in Lila’s car. Annalise suspects that he wanted more since he was sending photos of himself to Lila. She demands to know why he lied.  Sam gives the typical answer in that he didn’t want her to think he hurt Lila. He denies loving Lila and mentions that she was the one persistent in continuing the relationship.  Riiight. Annalise reveals during this conversation she was Sam’s mistress before becoming his wife.  That was an interesting tidbit.  It makes sense why she would be insecure about Sam’s supposed fidelity.  Unfortunately those fears are justified because Sam has cheated more than once. What is also revealed is that Sam met Annalise when she felt broken. Bonnie hears the argument from downstairs.  There is a brief struggle when Sam tries to calm Annalise down but she tells him to “get out!” Bonnie and Sam share a look before he leaves the house.

Rebecca goes to Wes’s apartment to eat some of his pizza. She calls him “Rudy 2.0”  She complains about being stuck in her apartment going crazy for company. Rebecca tells Wes she knows about Annalise not wanting to use the phone. Rebecca’s miffed that Wes hasn’t come to see her lately. She mentions that she likes to make people uncomfortable and mentions that Wes has issues if he’s going out of his way to help someone he barely knows. Wes points out she has issues too. Wes wants to believe Rebecca sooo bad when she reassures him that she didn’t kill Lila. There was definitely some weird flirting going on between these two. 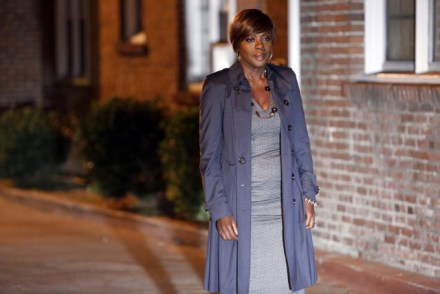 Annalise tries to drink her sorrows away. Sam is trying to call her but she doesn’t answer.  She meets up with Nate instead.  Nate thinks that Annalise ratted out their relationship and his side investigation of Sam. He was fired because of it.  He doesn’t believe her when she denies telling the police anything.  Annalise looks floored when Nate tells her Sam drove back to Philly the night of the murder and leaves.

Annalise confronts Bonnie since she would’ve been the only one that could’ve spilled the beans.  Bonnie tries to explain but Annalise interrupts her.  She knows that Bonnie didn’t do it for her and thanks Bonnie for protecting her husband. Bonnie leaves after apologizing. I like how Annalise was calmly pissed. She hardly raised her voice but you could tell from her facial expressions that she was trying to keep it cool.

Sam confirms what Nate told Annalise about not being at Yale the night of the murder.  He explains he came back to Philly because Lila called him saying she was going to hurt herself. He couldn’t find her and drove back to New Haven.  Sam apologizes for sleeping with her and lying about it. He again denies he killed Lila. Annalise tells him at the last minute that he will be doing a psych evaluation on Rebecca but really fishing for what she knows. Sam doesn’t think it is a good idea, but Annalise tells him to put  his “game face on.”  Wes and Rebecca arrive.  She doesn’t immediately recognize Sam. 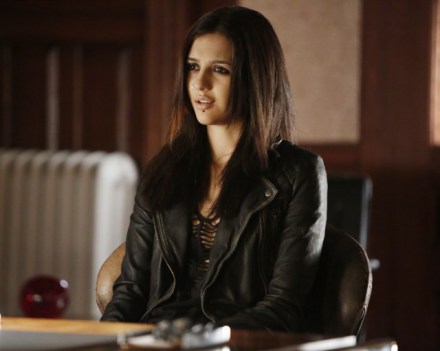 Sam interviews Rebecca while Annalise listens in upstairs. Rebecca has been through a psych eval before in juvie.  Rebecca explains how she knows Lila and how they both dealt drugs to students on campus.  Lila left her phone at Rebecca’s apartment the night before the murder which is why she had it.  She tells Sam that Lila referred to her lover as Mr. Darcy and knew he was married.  I felt like that was a disservice to the character of Mr. Darcy.  When Rebecca mentions she has seen the picture, Sam tries to dig a little too much which has Rebecca’s paranoia kick in but he was able to recover by explaining Annalise is trying to find the man.

After the interview Rebecca goes to the bathroom then leaves with Wes.  Annalise tells Sam he’s sleeping on the couch. Back at the apartments Wes notices Rebecca’s door ajar.  I guess they left separately from the house?  He calls her and finds out she is trying to leave town warning him to not trust Annalise because they are both in on it.  Wes is wondering what she means when she mentions the wallpaper in the bathroom.  Wes creeps into the house.  Sam is sleeping on the couch and doesn’t sense someone there. Wes goes up to the bathroom to look at the wallpaper.  Annalise walks in, dressed down for the night, sees Wes and demands to know why he’s there.  Wes says that she lied to him. He knows now that Mr. Darcy is her husband because the picture was taken at the house. Oops. We end the episode with Annalise looking like she’s trying to think fast knowing the cat’s out of the bag. So is that how Annalise knew? I hope she recognized her husband’s body first then confirmed by seeing the wallpaper.

It looks like we may get more Asher next week guys!  I can’t wait!  So what did you think of the episode? Are you enjoying the character development of all of the characters? What are you looking forward to next week? Sound off below in the comments!

TVTalk with Natasha and Kimberly Ep 45