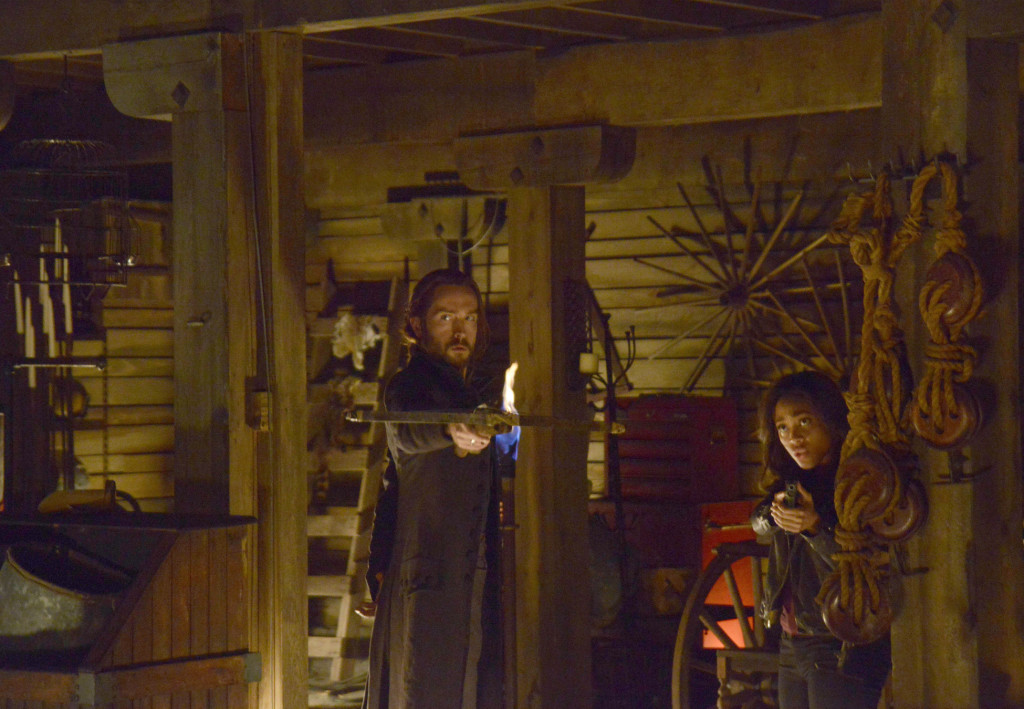 Sleepy Hollow is finally back after the Christmas break with a new episode!  We get to see the effects of Henry killing Moloch both in the supernatural sense and what it means for the remaining characters. 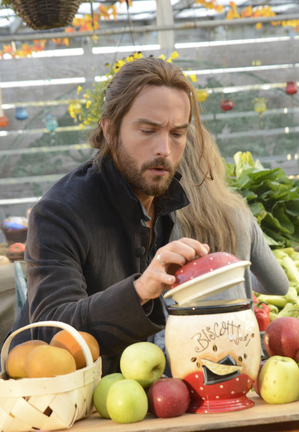 The show picks up right after the killing blow to Moloch.  While there was relief that all four survived, Henry’s absence was noted by both Katrina and Ichabod.  Six weeks later…. Ichabod is restless after hardly any paranormal activity.  Abbie thinks they would see some kind of obvious sign if something major was about to happen.  One of those signs is seeing a bad apple with worms in a farmer’s market.  Ichabod’s gut is telling him that a unholy ceremony is brewing and has noted the bad apple and strange happenings at Wilcox farm.  Abbie thinks they should consult Katrina but Ichabod says it’s too early yet in the investigation.  Someone’s playing the avoidance game!

Through Abbie and Ichabod’s conversation we learn that he has been distant with Katrina while she spends time with the still chained Abraham aka the Horseman of Death.  I’m surprised that Ichabod is okay with Katrina spending so much time with Abraham considering he has noted her feelings for the man.  I get he needed time alone but that doesn’t help fix what is wrong with his marriage.  They are even sleeping in separate places.  She has the cabin while he stays at the Archives.

That night Abbie and Ichabod investigate Wilcox Farm for anything supernatural.  Crane has concerns that if his role as a witness is really over, he would need to really examine his life and where he would fit in.  There was even talk about getting a job!  During their conversation, they come across a barn.  Voices are heard talking in a strange language.  Looks like Ichabod was right after all! They burst in while demons are trying to complete a ceremony.  Ichabod notes that the robed creatures are trying to find someone.  The demons are able to deflect the arrow shots and the bullets shot from the witnesses.  Just then an angel with black wings appear dressed in black and silver.  He quickly dispatches one of the demons using his silver circle glowy weapon. The other two quickly escape in the flames.  The angel announces himself as Orion (Max Brown). 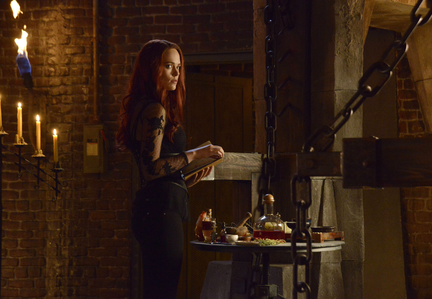 Back at the dungeon. Katrina in a new outfit creates a spell to keep prying eyes and ears away from her conversation with the Horseman.  She feels guilty that Abraham turned into the Horseman so has been trying to find a way to make him mortal again.

We go back to Orion who explains he escaped from purgatory and now hunts the evil ones that also broke out.  He mentions that he is the only angel that wanted to fight the evil down here on Earth.  Orion admires Ichabod and Abbie for fighting the evil instead of just sitting back while the apocalypse came.  Ichabod gets a text from Katrina (she’s texting now too!) about a pressing matter. He cautions Abbie about Orion. Jenny then calls Abbie wondering why she isn’t being her wingwoman while she tries to catch the eye of a hot bartender. Abbie explains that she needs to hunt down some demons with Crane.  Jenny will call Hawley to see if he has any artifacts that could help.

Orion is vague about heaven and God with Abbie.  He does admit that he spent many years with the angels before hanging around earth.  He admits that he is a rogue angel since he broke ranks. Just for a minute I felt sorry for the him. Orion explains that the demons they encountered are called Daevoli.  They are searching for a new master. He has been tracking them to see if they would reveal their new master. Apparently they are looking for the Horseman of Death. Surprise, surprise. His weapon can destroy the Horseman.  Abbie tells Orion she knows his location.  When they are almost there Orion gives Abbie a charm that when she thinks of him he will come.

Ichabod meets with Katrina, who wanted to discuss making Abraham mortal. He argues that he is now their enemy.  She tries to bring up that it was their marriage that made his former best friend turn evil.  Ichabod wants to think about it. Abbie and Orion catch up with Katrina and Ichabod.  He tells Abbie of Katrina’s plan. Abbie thinks that Abraham is not worth saving because of those he has killed.  She tells him of Orion’s plan.  Ichabod wants to test Katrina’s theory. Katrina and Orion talk and she also learns of his plans for the Horseman.  She quickly goes to the dungeon and sets Abraham free on the condition he doesn’t kill anyone while she makes her attempt to make him human.

Orion goes away in a huff once he finds out with Abbie and Ichabod what Katrina did.  Abbie is not happy because she wants the Horseman dead.  Ichabod doesn’t fully trust Orion.  He will find text regarding him while Abbie looks for Abraham, Orion, and the demons.

Hawley meets with Jenny at the bar and rudely butts in on her flirtation with handsome Mike (Josh Carter) the bartender. Jenny wants him to mind his own business about her love life.  He brings the egg of Asag that is supposed to help them find the Daevoli but doesn’t know how it works. They both leave to figure it out.  It’s the next day and they are still trying to guess how the egg works.  Hawley has an epiphany when Jenny berates him on his shiftless tendencies.  He breaks the rock egg which hid the real artifact inside. They use it to find the Daevoli.  Jenny calls Abbie with the news.  The Horseman unfortunately is also with the demons at his carriage house. Looks like they found their new master!

Abbie decides to use the charm to call Orion.  He comes and is happy that she wants the Horseman dead just as much as he does.  Ichabod calls as she is about to go to Abraham’s location.  He warns her that Orion’s presence has always been around weeks before major catastrophes in human history as if he has instigated it.  Abbie tells Crane where they are headed.  She asks Orion his plans after defeating the Horseman.  He spouts that his blade will draw the Horseman’s power and with it he can play judge and jury getting rid of the evil in this world.  When Abbie tries to reason with him it falls on deaf ears. 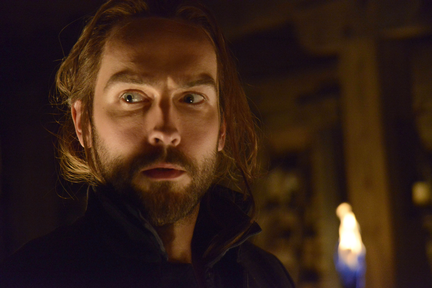 Abbie, Orion, and Crane reach the carriage house.  The Horseman, with the help of the demons, has his axe back.  Orion and Horseman start battling while Crane and Abby fight the demons.  The Daevoli are destroyed and Orion’s blade hits Horseman in the back absorbing his power.  Abbie distracts Orion while Crane destroys the weapon.  Orion feels betrayed by Abbie who he thought was his strongest ally.  She tries to reason with him one more time but realizes he is crazy.  Freed from the blade, the Horseman starts going after Orion who flies away.  Abraham starts heading toward Ichabod when Katrina stops him.  He tells them he will let them try to make him human but he is not going back as a prisoner.  He then asks them to leave.

Ichabod has a chat with Katrina.  He didn’t appreciate her using their marriage to argue her point.  She just wanted his support.  They agree to take baby steps toward redefining their marriage.  Back at the police station, both Abbie and Ichabod discuss that what happened and that they are stronger in their relationship for it.  It is okay that they disagree sometimes because it is just another way of seeing the situation.  In this case Abbie agrees that Katrina was right in letting Abraham go.  They both know that the fight is not over but the field has changed.  Ichabod leaves with “Witness represent.” I cracked up when he said that.   Abbie finds Orion’s charm but just touches the cord, thinking about him.

We get a nice surprise!  We see Irving enter a store, drink milk straight from a carton in a gas station store. He leaves without paying for it and a sandwich.

So what does Irving’s presence mean? Does he have his soul? Are we going to see Orion again? Where’s Henry?  I’m looking forward to the next new episode because it looks like Katrina and Ichabod go on a date.   Sound off in the comments below your thoughts of the episode!

Everyone is A A Pretty Little Liars Podcast Episode 15: “Whatever Happened to a Thank You Card”

DCTV Ep.10: Shot Through the Heart