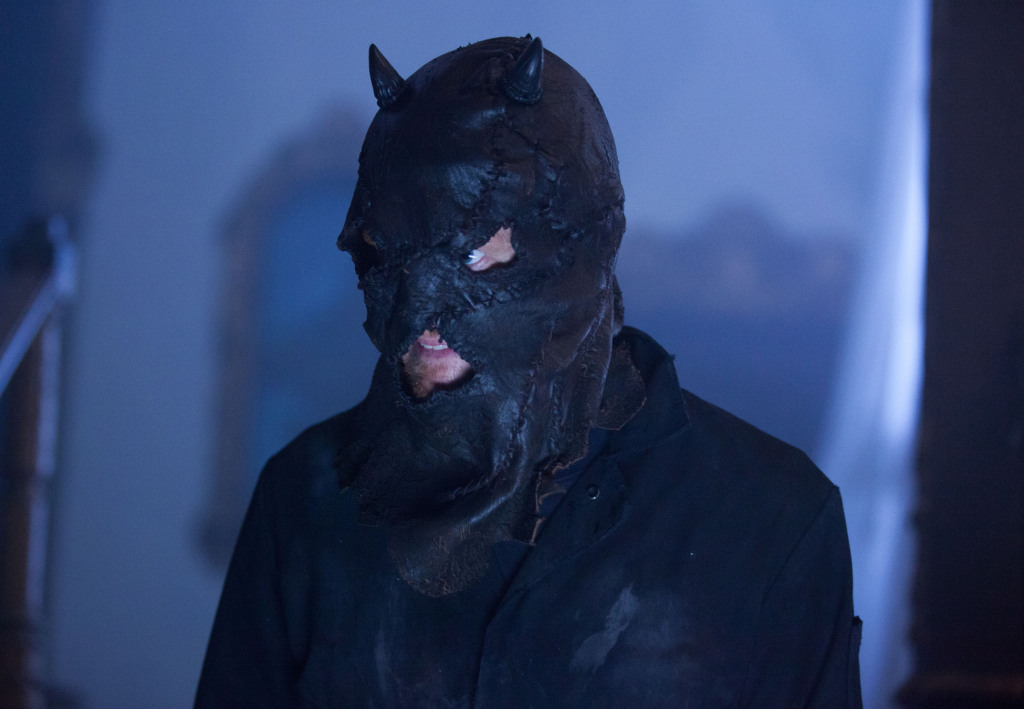 We are starting to see why Harvey Bullock is a cynic, Jim Gordon gets arrested by his fiancee’s jealous ex-girlfriend, and Oswald Cobblepot predicts he will do great things in “Spirit of the Goat.” 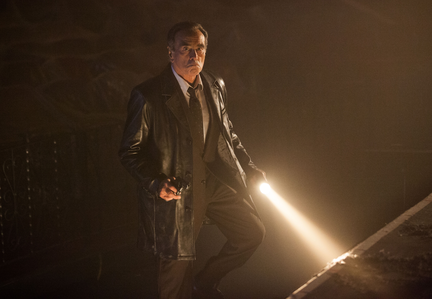 We start with a flashback of Gotham 10 years ago when serial killer Randall Milkie (Christopher James Baker) peps himself up before kidnapping another rich female victim by repeating “I am the Spirit of the Goat” then putting on a mask that has bat/cat like ears.  Identity crisis much? Harvey and his partner Dix (Dan Hedaya) go into an abandoned theater to try to save the woman but they are too late.  Harvey and Dix confront the killer.  Dix gets seriously injured after falling through a trap.  Harvey winds up shooting the killer, but not before the killer mentions that he will always come back.  Harvey didn’t seem so cynical in this scene.  It seemed like he really wanted to be able to save someone and was disappointed when he couldn’t.  It should be noted in the flashback that before the victim got kidnapped there was a TV story about maybe Bruce’s birthday and his parents celebrating by inviting orphans to their home.

We are back in the present with Harvey feeling a sense of deja-vu when he is called to the scene of a female dressed in white with her arms held up by ropes on a train bridge near the water.  Harvey initially thinks it’s a copycat because of the M.O. – the victim was the eldest of a rich family. Jim Gordon hasn’t arrived on the scene yet which surprises Harvey so Harvey calls him.  Gordon is busy having a conversation with Barbara who wants him to share his burden. Gordon gives in to Barbara’s request about unloading his feelings about some of his cases with her.  Gordon finally arrives on the crime scene and Harvey fills him in. Harvey asks Edward Nygma as he’s leaving with Gordon to let him know when he’s set up the autopsy.  Gordon and Harvey go to talk to the victim’s father, Mr. Hastings. He mentions having nightmares sensing a dark presence.  Harvey notices his hand shakes oddly.  Dr. Marks, Mr. Hasting’s therapist, coaxes Mr. and Mrs. Hastings to leave the room.  Gordon and Harvey leave after she tells them that the Hastings are not able to handle questions for right now. 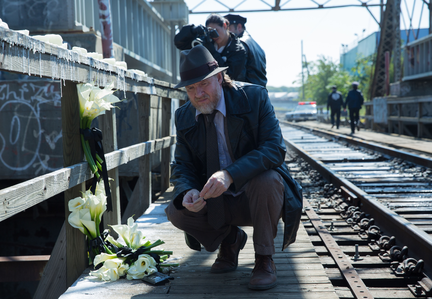 Nygma tries to find records pertaining to the previous “Goat” murders’ case.  He talks to Ms. Kristina Kringle, who organizes the records room.  He seems to be sweet on her.  I don’t blame him for making some kind of comment about her name.  She warns Nygma about changing the order of things when he suggests that the room needs to be re-organized.  He takes it upon himself to “improve” things anyway which pisses Ms. Kringle off.  She mentions the wooing Nygma has been doing by sending notes and riddles.  Nygma tries to smooth things over but winds making the situation uncomfortable and awkward.  At least Kringle only called him odd instead of crazy.

Harvey and Gordon figure out that the killer must have access to the victims homes by being some kind of maintenance worker like a janitor.  They hear that the autopsy is ready and are told the victim died of asphyxiation. Harvey tells the coroner to look close to the scalp at the back of the head.  It’s stitched up and when opened the coroner pulls out a penny.  The killer from 10 years ago left the same signature.  Harvey’s having a hard time believing that it’s the same killer since he shot the man dead years ago.  He left that piece of evidence out of his report on purpose because of the concern of copycats.  The chief tells the partners to talk to Dix since the old coroner died so he wouldn’t have told anyone. Harvey and Gordon go to see Dix who is at a long term care facility. Dix didn’t tell anyone about the penny.  He thinks that the original killer wasn’t working alone and it’s a conspiracy against rich folk.  Harvey leaves in a huff when he doesn’t believe Dix’s theory.  As Gordon is leaving he sees Harvey talking with an administrator about the bill and if he’s getting magazines.  Maybe there is still some white knight left in Harvey after all.

Alfred has concerns about Bruce being in danger because the killer is targeting the eldest rich offspring.  Bruce decides to stay in town to work and points out that he doesn’t have parents. Since when did Bruce get a job? We later see him asleep in the study.  Selena aka mini Pfeiffer lets herself in through the balcony windows and takes an object from the desk then leaves.  What was the point of that scene? To prove that Bruce needs to improve his security? Who was Selena getting that object for?

Another rich young woman gets snatched. Harvey is called to the scene.  Gordon is back at the police station. They discuss over the phone that they need to narrow down the list of workers that could’ve had access to both victim’s homes. Gordon thinks it is someone who would’ve called in sick.  Harvey suggests asking Nygma since he’s good at puzzles.  Gordon and Nygma figure out that it must be Raymond Earl because he goes to the same theater on Cannery Drive as in the flashback.  Gordon and Harvey are able to save the young woman this time.  Harvey warms up the killer (wearing the same mask) for Gordon to get in a few licks before knocking him out.  Harvey is still feeling like he’s missing something. He then notices Earl squeeze his fists similar to how Mr. Hastings shook his hand.  Harvey confronts Ms. Marks who was in a session with Mr. Hastings.  She admitted to hypnotizing both Milkie and Earl after Harvey presents the evidence.  She then gets Hastings to attack Harvey and she almost escapes but Harvey is able to shoot her near the ankle after knocking out Mr. Hastings. 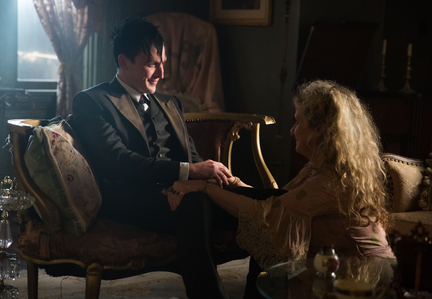 Cobblepot comes home to his momma Gertrude Kapelput (Carol Kane).  He tells her some bad men tried to kill him and he thinks he has help with this cop named Gordon.  He’s special and not like the other ones.  “You watch Mom, I’m gonna be someone in this town!” I felt like I was watching a little boy talking big to his mother during that entire scene.  It got worse when he’s in the bathtub and momma Kableput is helping him wash.  I get weird vibes from that relationship.  Momma seems a little too jealous at the concept of her son even hooking up with someone.  Oswald gets ready to make his official debut back into Gotham! 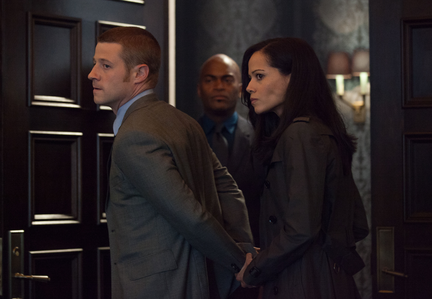 While Harvey and Gordon are out there solving crime, the jealous ex-girlfriend, Renee Montoya and her partner Chris Allen are still trying to arrest Gordon for the death of Oswald Cobblepot.  They find a witness who saw Gordon shoot Cobblepot from a distance near the pier.  Montoya is happy by this news.  Ummm no.  It’s like she has such blinders that it didn’t even occur to either of them that Gordon could have faked shooting the man. Barbara tries to tell Montoya at the police station that she’s wrong about Gordon but she doesn’t listen.  Montoya warns Barbara to get out of town since her man is about to get arrested.  I initially admired Barbara for appearing as though she wouldn’t leave her man hanging.  That changed when we see her packing up like Montoya advised.  She at least warns Gordon that he’s about to get arrested.  Gordon is like he had to face it sooner rather than later.  Montoya and Allen arrest Gordon and takes him to the precinct.  Harvey’s ticked as well as the Captain.  Montoya and Allen arrest Bullock too.  Things start to get really tense when Cobblepot enters saying “Hello. I’m Oswald Cobblepot.” The show ends with Harvey trying to get at Gordon because he lied about killing him.  At least he saved you both from going to jail!

Fish Mooney was mysteriously absent in this week’s episode. Her presence was missed.  After watching this episode a second time I enjoyed it more because initially I was bored when watching it live.  I’m glad we got to see a more human side to Harvey.  Next week it looks like we will see the fallout now that Oswald’s announced being alive.  The previews look packed with tension, Mooney, and mob drama!

What did you think of the episode? What are you looking forward to next week? Sound off in the comments below!