Welcome to the recap of Ash Vs. Evil Dead, Episode 2: “Bait”! 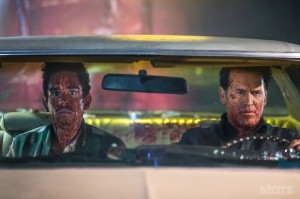 After last week’s 45-minute debut (which if you missed, I suggest you go and watch, here’s our recap of it, Ash vs Evil Dead Episode 1 – ‘El Jefe’), we’re down to the show’s normal runtime of 30 minutes. Luckily, AvsED continues with one-liners and gore galore! This week’s ep is directed by Michael J. Bassett, who’s got some serious action chops (he directed six episodes of the recently ended Cinemax series, Strike Back). His style is not the same as Raimi’s, but he’s able to keep up with the master when it comes to Deadite fights.

We pick up where “El Jefe” left off, with Ash explaining Deadites to Kelly and Pablo. Ash knows he can’t run from the problem he created, and he wants to get to Books From Beyond, a bookstore where he believes someone can help him translate the spells in the Necronomicon and destroy the Deadite menace for good. Kelly, though, is desperate to save her dad, so she takes off while Ash is getting the trailer hooked up to his 1973 Oldsmobile Delta 88 (his car from all three Evil Dead movies). Just behind the Delta, Ash’s possessed boss, Mr. Roper, stalks him.

Pablo tells Ash that Kelly stole the Necronomicon; the two head off to her house so Ash can get the book back. Mr. Roper pops out of the back seat and attacks in a sequence scored to Deep Purple’s classic song, “Highway Star,” and it’s all great. One thing AvsED does well is use practical special effects augmented by CGI; the effects during the fight with Mr. Roper are no exception. Roper pins Ash in the back seat; Pablo tries to keep them from crashing while simultaneously trying to stop Mr. Roper from killing Ash. He attacks Roper with one of Ash’s many empty beer bottles, but it merely breaks with no damage to the Deadite. Ash, however, is able to use it to stab Roper repeatedly in the neck; blood gushes everywhere and Pablo freaks out. Ash shoves Roper’s body halfway out the window, where Roper is decapitated by a passing vehicle.

Agent Fisher, meanwhile, is at Mossy Haven investigating the massacre that happened there earlier. She learns about Ash and that his neighbors pretty much all think he’s a dick, given the whoring and drinking and general dickishness they’ve seen from him. Fisher notices a severed hand pointing a finger to a card for Books From Beyond. It’s a very funny touch reminiscent of Ash’s severed hand giving him grief in Evil Dead 2: Dead By Dawn. Fisher’s boss turns up and admonishes her for being at a crime scene while she’s on leave, but she can’t leave it alone. Incidentally, the artist’s sketch of Ash looks a lot like a cross between Campbell and Arnold Schwarzenegger. Ash is a kind of Terminator, if you think about it (even down to the one-liners!).

Back to Ash and Pablo, who have arrived at Kelly’s dad’s house. They are greeted by Kelly, her dad, and…her mom (Mimi Rogers), who’s alive! She didn’t drown in the accident like everyone thought, she explains; she had amnesia, but now she’s back. Except Ash doesn’t believe it’s really Kelly’s mom, and he’s all kinds of rude and insulting to her. Mrs. Maxwell, however, brushes it off and invites Ash and Pablo to dinner.

While the pair clean up in the trailer, Pablo reveals that Kelly never took the Necronomicon, and that he lied to get Ash to help Kelly’s dad. Ash is pissed, but agrees to help. During the world’s most uncomfortable and awkward dinner, Ash tries everything to get the Deadite he’s convinced is there to reveal itself. We know something’s wrong with Kelly’s mom because she keeps attracting flies, plus Ash sees blood dripping from her mouth during dinner. Of course, no one else does.

Ash finally tires of playing mind games with Mrs. Maxwell and punches her in the face, causing the Deadite to come out. His being right comes with a large price, as Deadite Mom kills Kelly’s dad with a fork to the eye. She then crawls around the walls and ceiling much like Carson did in the previous ep when he was possessed, then disappears before Ash can kill her with his chainsaw, which was conveniently sitting on the counter.

Kelly retreats to her bedroom, where she finds her mother, restored, singing “Hush, Little Baby,” a direct call-out to ED II. Kelly hugs her mom. Just as Ash and Pablo locate the pair, the Deadite returns to tell Kelly her mother committed suicide and tries to kill Kelly. Ash goes after Deadite Mom with his chainsaw, but it gets stuck in the wall and turns off. Deadite Mom almost turns Ash’s boomstick on him—curse his large chin!—but Pablo stabs her in the head with a kitchen knife. She, of course, being a Deadite, simply pulls it out, and is about to stab Pablo and Kelly when Ash finally gets the chainsaw restarted and jams it into Deadite Mom’s gut before chainsawing off her head (the only way to stop a Deadite is to dismember it).

The trio buries Kelly’s mom and dad, and Ash urges her to get over her grief because he’s done it a lot and it never gets easier, but it’s necessary. Kelly responds by letting Ash know her parents were Jewish, and he whines a little about wishing he’d known before he made crosses to mark their graves. The three then head off to Books From Beyond; cut to a shot of the bookstore and Agent Fisher, standing across from it. What will she learn before our intrepid Deadite-killers show up?

This week in Ash (and other) one-liners:

How to Get Away with Murder Ep 6 Recap