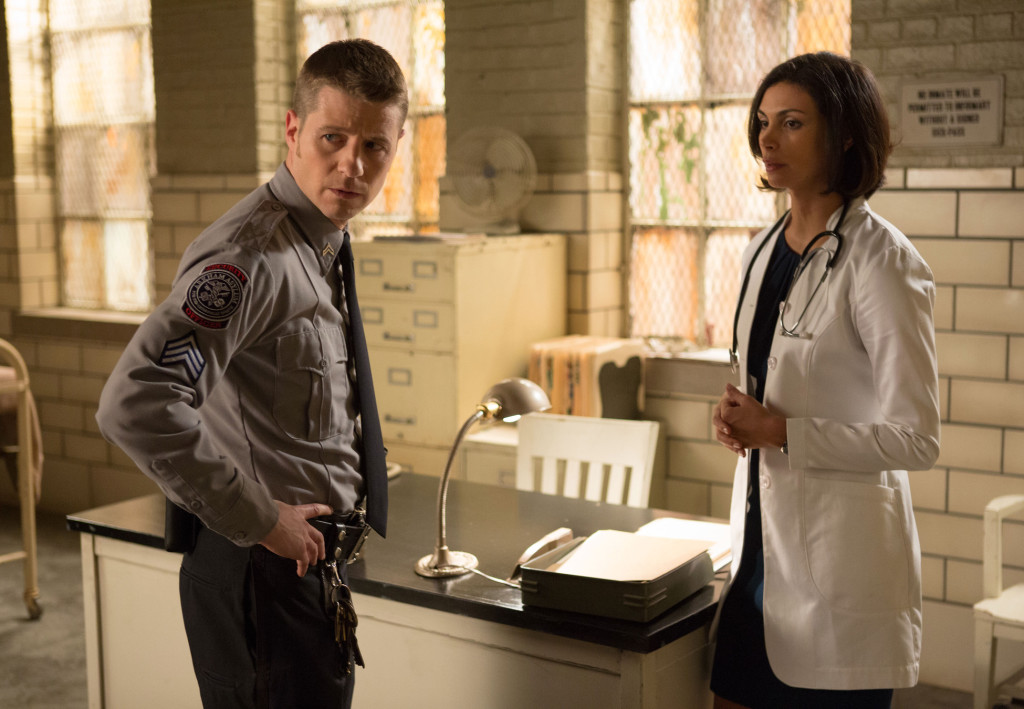 Gotham comes back from its winter hiatus with James Gordon working in Arkham Asylum.  It’s so nice to see Morena Baccharin of Firefly fame back on the TV screen as Dr. Leslie Thompkins. 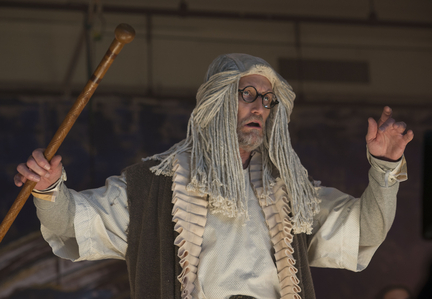 We start the episode with a play some of the patients have put on for some of their comrades in Arkham Asylum.  Gordon is guarding the festivities.  There is a brief montage of what other characters are doing like Barbara, Selena, and Detective Bullock.  One of the patients gets so riled up by one of the patients singing that he pulls him from the stage and starts punching him. Gordon manages to hold down the patient before too much damage is done.  Dr. Gerry Lang (Isiah Whitlock Jr.) the head shrink is upset with Gordon for not having better control over the situation even when one of the nurses come to his defense.  He warns Gordon about doing his job or he gets assigned to a worst place in the hospital.  Dr. Lang agrees to bring in a doctor to see to the injured mental patient. In walks Dr. Thompkins checking in on the patient and introducing herself. She admires that Gordon hasn’t quit after his reputation is in tatters.

While doing rounds Gordon finds one of the inmates with marks on his head, unresponsive.  Dr. Thompkins pronounces him brain dead from electro shock therapy.  Dr. Lang has Gordon investigate but doesn’t want to call in the GCPD.  Dr. Thompkins thinks that it has to be someone that knows anatomy and access with keys.  Gordon questions all of the inmates to see who had stolen one of the guard’s set of keys during the play.  Of course all of them deny it.  We then see the same patient that got beat up earlier get the shock treatment.  Gordon finds him later outside of his cell.  Fortunately he is at least still functioning.  Gordon thinks that one of the staff is behind the shock treatments and warns Dr. Thompkins to go back to her ward since there will be drama.   She wonders why he doesn’t suspect her and he thinks she is not capable of it.  He tells Dr. Lang that he called GCPD.   When Bullock comes on the scene, he quickly takes control of the situation and forces Dr. Lang to cooperate with the investigation. 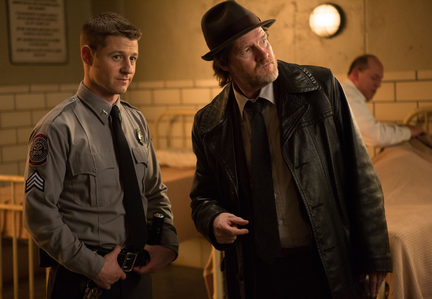 Bullock questions Dr. Lang.  He denies that no one on his staff, nor any inmates are surgeons who would have precision to conduct the treatments.  Bullock tries to make Dr. Lang guess who of his staff would do it.  He then thinks of Nurse Dorothy Duncan (Allyce Beasley) who reveals herself when she pushes Dr. Thompkins into Gordon.  She lets the inmates out and tries to make her escape but is trampled by the other patients. Gordon and Dr. Thompkins manage to barely get away themselves.  Bullock, Gordon, and the Captain, thinking the case is solved, try to celebrate with a drink. 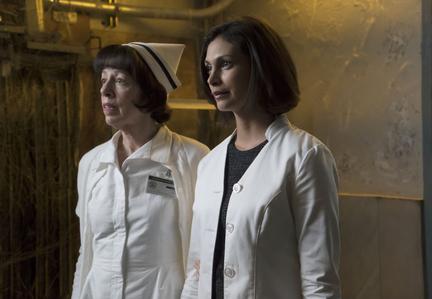 The GCPD celebrated too soon. The medical examiner noted that Nurse Duncan had the same marks as everyone else that got the shock therapy. Jack Gruber (Christopher Heyerdahl) makes his escape with one of the other inmates Aaron Helzinger (Kevin McCormick).  Dr. Lang winds up getting killed because he saw them getting out.  Gordon and Bullock find him but it’s too late but sees a note Gruber left for him.

Barbara is initially knocked out on drugs with Detective Montoya.  The following day Montoya admits that it was a mistake to sleep with Barbara because there is drugs and alcohol involved.  She’s made progress with working on the drinking and doesn’t want to take two steps back.  Barbara gets upset and Montoya manages to convince her to stay to work on herself.  Montoya leaves. 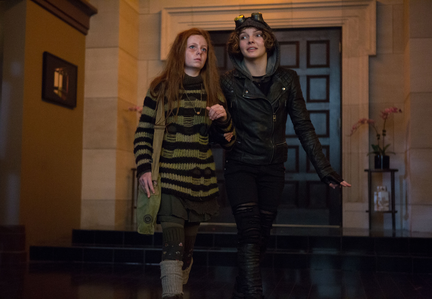 Selena finds Ivy (Clara Foley) hiding sick from the weather.  She takes her to Barbara’s apartment to recover.  Selena thinks that they would not be discovered based on the dust and smelling something rotten in the place.  While they stay there, Barbara calls and Ivy answers the phone.  She tries to sound older and imply that not only is Jim there but is unavailable.  Barbara throws the phone in frustration.  Gordon finally comes back to the apartment and sees that someone has been there but he thinks it’s Barbara. 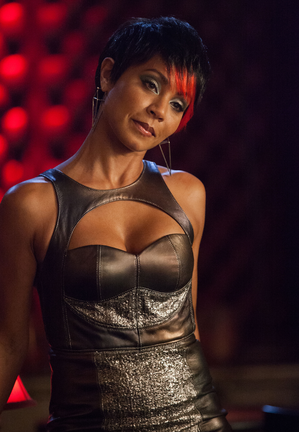 Penguin’s first attempt to exert authority in his own name not Maroni or Falcone’s doesn’t go well when the fisherman he was raising bribes to called the cops.  The cops wound up siding with the fishermen.  Penguin is in jail and tries to appease to Bullock to get him out.  Bullock refuses.  Maroni picks up him up finally but calls him out for trying to raise taxes.  Fish Mooney has a meeting with Saviano (John Enos III) and the other mob boss to discuss hypothetically who would be leader of the families if something happened to Falcone.  She puts it out there that she would be interested.  Saviano also would want to take over because of seniority. After the meeting Mooney talks with Butch about getting rid of Saviano.  He offers to talk to Saviano on her behalf.  Fish gets concerned that Butch is turning on her but denies it.  He later meets with Saviano, who tries to convince Butch that Mooney is overreaching and he should drop her and come work with him.  Butch says he will think about it.  Butch made his decision by killing Saviano.