We pick up where we left off last week with the two Arkham Asylum escapees Jack Gruber (Christopher Heyerdahl) and Aaron Helzinger (Kevin McCormick).  They go to Irwin’s Electronics store to stock up.  Gruber knows the owner of the shop. Gruber got double crossed by him and someone else. The poor employee got zapped to death just from opening the door.  Irwin gets shock treatment even though he kept Gruber’s equipment in decent shape. 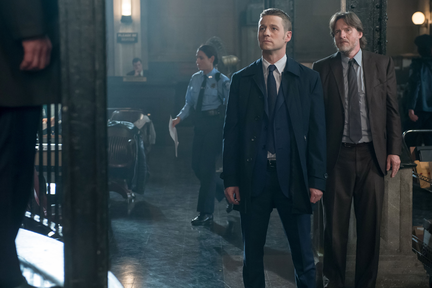 Captain Essen briefs the other detectives in the precinct about the escapees.  She is shocked to see Gordon walk in.  Bullock tries to get him to leave before Commissioner Loeb (Peter Scolari) sees him but it is too late.  Gordon manages to convince the Commissioner to reinstate him as detective, as they hunt down Gruber and Helzinger. The condition is Gordon has 24 hours to find the escapees or him and Bullock are out.  Bullock wasn’t happy to get roped into that deal.

Edward Nygma informs Bullock and Gordon that Gruber is really James Buchinsky, a bank robber who managed to get transferred to Arkham instead of staying in prison. Nygma is still trying to pursue Ms. Kringle (Chelsea Spack) poor thing.  She was not appreciative of the bullet in the cupcake riddle he gave her earlier. Meanwhile Bullock finds out that Buchinsky robbed four banks and killed six people before getting caught.  He had accomplices but never revealed them.  It turns out Irwin was one of them.  Gordon and Bullock find the Arkham transport van near Irwin’s Electronics.  They find Irwin, whose been reduced to mindless  writing on the wall and his dead employee.

Nygma gives Bullock and Gordon special shoes that will help with electric shocks. Dr. Thompkins visits the detectives wanting to help them catch the Arkham escapees. She brings a doll that Buchinsky made for one of the female patients to curse.  The doll’s name is Mr. M and looks a lot like Sal Maroni (David Zayas). 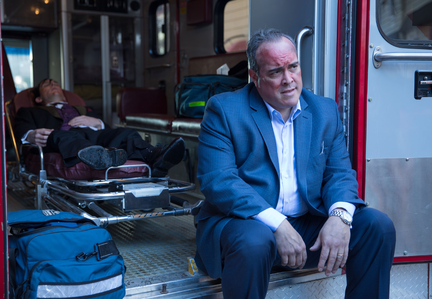 Buchinsky attacks Maroni’s restaurant by putting in an electrical gadget that shocks everyone in there, including Penguin, who was just about to leave after getting a call from Falcone.   Penguin lies of course to Maroni about where he’s going but then he makes a major slip while still recovering from the shock he received from the attack.  Gordon approaches Maroni about putting him in protective custody as “bait”. Maroni agrees after hearing Penguin’s guffaw.  He brings Oswald with him to the precinct.  When Penguin comes to, Maroni confronts him about where he was really going.  Penguin has to think fast when he heard of his slip.  He vehemently denies it and Maroni says he believes him.

In the records room, Nygma explains to Ms. Kringle what his riddle meant, which was “a beautiful woman is a dangerous thing.”  Kringle appears flattered but when one of the other officers asks Nygma to leave he overhears her call him weird. Before Nygma left he thought he heard rumbling.  It turns out it was Buchinsky tinkering with the electrical wires outside of the precinct.  Buchinsky makes his move and sends a severe electrical shock in the building, knocking out several people.  Poor Penguin was about to leave again when he was caught up in the attack. 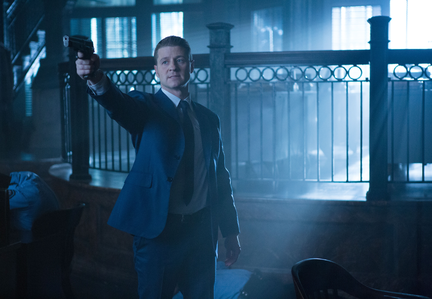 Gordon, who fortunately had his shoes on, confronts Buchinsky and Helzinger when they enter the building to pick up Maroni.  Gordon manages to subdue Helzinger, who is a big guy.  Buchinsky tries to pychoanalyze with Gordon’s need to win. Gordon does win by throwing water at Buchinsky’s contraption strapped in front of him, deactivating it.

With Gordon saving the day, he is definitely back on the force. He starts off on the right note by threatening Commissioner Loeb if they try to take his job away again. Gordon tells Bullock he is no longer playing nice and careful.  Bullock corrects him in that he hasn’t really been careful at all but they go out for drinks.

Falcone has a flashback of a funeral where his mother, who looks alot like Liza, is holding him.  He comes back into the present and kills one of his goons. He later meets with Liza.  He tries to convince her he could set her up with a bakery but she would prefer to stay at his side. Liza gives him a flower and puts it in his lapel.  She later gets kidnapped by Fish, who informs her she is making her move against Falcone.  Mooney then calls Falcone (voice disguised) to ransom him while Liza plays along. She teases him at first and makes him sweat to think about his life.  When she calls back acting like a intermediary, Falcone gets her to confess that she’s behind it, which she confirms.  Mooney’s condition is Falcone leave town with Liza, stepping down from the mob throne.  Falcone  resignedly agrees, still feeling the sting of betrayal from Mooney.  Fish asks Liza to string Falcone along for a while after they leave.  She agrees, but I think she would have stayed with him permanently given the opportunity.  Mooney feels this was the best way to go instead of killing Falcone .

Meanwhile Falcone tells Victor Zsasz (Anthony Carrigan) that he is to protect both him and Liza in the upcoming meeting.  Victor is surprised to see the defeat in Falcone. The mob boss does reflect on his life and understands what Mooney was trying to do. Penguin finally arrives to tell Falcone that Liza was working with Mooney.  She had her trained to look like his mother.  Falcone doesn’t want to believe him and slaps Penguin for his efforts.  Mooney calls to tell Falcone to meet her at her club for the exchange.

Falcone arrives.  Mooney wants him to sign papers relinquishing his control of the families to her.  He scoffs that papers wouldn’t make her a Don. He asks to see Liza but Mooney tries to stall. He insists and Mooney agrees.  Liza is brought out. Falcone asks if she’s okay then questions her about long she has known Mooney. She denies it at first but he tells her that a “little birdie” told him that she was planted.  Falcone remembers telling Fish about his mother.  He then sees from the body language between the two women that it’s true.  He has Victor and his women gang surround Mooney and Butch.  Falcone apologizes to Liza then proceeds to choke her to death.  Mooney watches helpless.  Falcone then takes the flower Liza gave him earlier out and drops it on the floor.  He then orders Victor to have Mooney and Butch locked up somewhere.  Falcone is hurt that not only did Mooney betray him by trying to take over, but she used his memories of his mother to do it. Penguin comes out and gloats. Mooney looks at him with murder in his eyes. 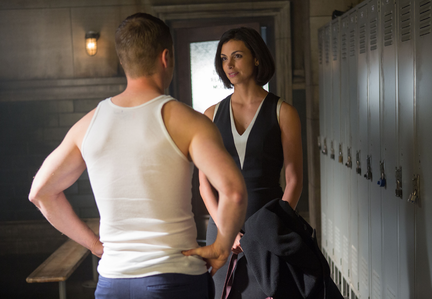 Dr. Thompkins visits Gordon in the men’s locker room at the precinct. It looks as though he has been staying there for awhile.  The good doctor came on the pretense of getting the doll back she gave him earlier.  However, she also shyly says to see him too.  Things get slightly awkward and when she’s about to leave Gordon stops her.  He then kisses her.  It’s like Barbara isn’t even on his brain.  Speaking of Barbara, she goes to her parents to stay for a few days.  Their meeting was really awkward and cold. I can see why she would not be close to them.  Back to the make out session.  Dr. Thompkins and Gordon continue kissing when an officer interrupts informing him of the shoot out at Mooney’s place.

I actually felt sorry for Barbara for the first time in this episode.  I am starting to see why she would have a substance abuse issue.  I also felt bad for Liza.  She should’ve remembered that Penguin knew about her and Mooney.  She should’ve warned Fish.  At least she would not have been totally blindsided.  Butch is probably thinking he should have taken his friend up on his offer instead of killing him.  The mob drama in this episode was way more interesting than chasing Buchinsky.

What did you think of this week’s episode?  Do you think Falcone should have killed Liza?  What do you think he has planned for Mooney? From the previews next week, it looks like torture.  Will Maroni find out for sure where Penguin’s loyalties truly lie?  Do you think Barbara will ever find her way back to Gordon? Which woman would be better for Gordon, Barbara or Dr. Thompkins? Sound off below in the comments!