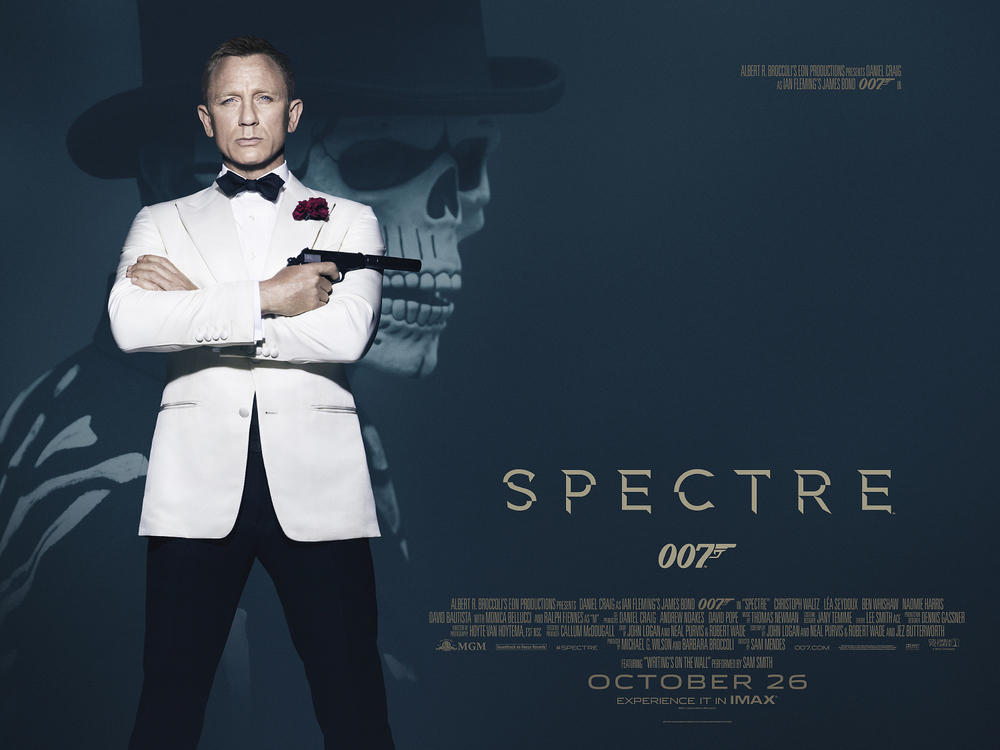 Spectre is the fourth James Bond movie starring Daniel Craig as the eponymous secret agent and the twenty-fourth in the series. Casino Royale and Quantum of Solace were ok but didn’t blow me away. Skyfall, however, was brilliant and that raised my expectations for Spectre. Director Sam Mendes returns for his second Bond film, he is not best known for action movies but he undoubtedly knows how to shoot an action set piece as well as the more emotional scenes.

Spectre sees James Bond receive a message from beyond the grave, sending him on an unsanctioned mission to Mexico City on the trail of Marco Sciarra. Bond travels to various destinations across the globe, trying to discover the secrets of a menacing organisation. Back in London M has to deal with challenges to MI6 with the head of the new Centre of National Security, Max Denbigh, questioning the relevance of the 00 program.

The opening Day of the Dead sequence in Mexico City is a great start to the film, it’s one of the most visually striking scenes in Spectre, perfectly balancing action and intrigue. Hoyte Van Hoytema’s cinematography is beautiful throughout the film but the Mexico City scene is particularly impressive. This leads into the opening titles, which are beautifully designed as always. Sam Smith’s ‘Writing’s on the Wall’ is much more palatable on the big screen than on the radio.

The plot is farfetched but it’s Bond, the franchise can get away with being silly and in fact I welcome it. It did get a little predictable at times but it was good enough. I miss the days of ridiculous gadgets, although let’s hope they don’t try the invisible car ever again. Speaking of cars, the Aston Martin DB10 is absolutely beautiful. Only ten were made specifically for Spectre.

Christoph Waltz is impressive as Franz Oberhauser, the head of the organisation Bond is tracking. Waltz is successful at being a menacing threat without being too over the top, which would have been easy given some of the plot turns. Following Javier Bardem’s turn as the villainous Silva in Skyfall is not an easy task but Waltz puts his mark on the Bond franchise.

There is a good amount of humour in the script, with Ben Whishaw’s Q getting the majority of the best lines. Increasing the number of gadgets would give us more Q and that can only be a good thing.

Lea Seydoux is the real star of Spectre, bringing some emotional depth to an otherwise relatively cold movie. She plays Madeleine Swann, the daughter of Mr. White who was seen in Casino Royale and Quantum of Solace. Seydoux is best known for Blue is the Warmest Colour and The Grand Budapest Hotel amongst others. She can seemingly cry on a dime and acts circles around Craig. The Bond girls of the Craig era have not been all that memorable with the exception of Eva Green’s Vesper Lynd so it’s nice to see Seydoux thrust to the forefront of the movie and portray a strong female character.

Spectre is not perfect however, there is one scene in particular that was a throwback to the supreme misogyny of 1960s Bond. It is the second of two scenes with Monica Bellucci’s Lucia Sciarra, the wife of Marco who Bond followed to Mexico City. It was an unnecessary scene, I’m not sure how the writers expected it to play to audiences but I for one was not a fan. It is also criminal that Bellucci is so underused; if you’re going to cast her then give her a role with more than five minutes of screen time. Heaven forbid Bond decides to be around a woman his own age.

Mr. Hinx played by Dave Bautista, appears to be an attempt to recreate Jaws (the character played by Richard Kiel not the shark). Like Jaws, Mr. Hinx is a henchman who barely talks but whereas Kiel managed to bring personality to the role without words, Bautista does not. He plays an important part in Spectre, being the face of the shady organisation but he doesn’t make much of an impact.

Ralph Fiennes has the difficult job of following Judi Dench in the role of M and it’s perhaps not surprising that he doesn’t make as good an impression as the Dame. M comes across like an angry terrier, which is not all that intimidating. Hopefully he will come into his own as M over the coming movies.

I wanted more Moneypenny, Naomie Harris is a great actress and she hasn’t been able to really show what she can do. Perhaps they could have used some of Andrew Scott’s screen time as Denbigh, or C as he is dubbed, to better service Moneypenny. I didn’t find him all that interesting although he is a popular actor so I am likely in the minority.

Overall Spectre is a great film with some impressive action sequences. It’s not as good as Skyfall but it is a lot better than Casino Royale and Quantum of Solace. I like that the writers have linked the Craig films together, something that is missing from a lot of Bond films. There are also a number of references to the Bond films of past eras, which will put a smile on the face of any Bond fan.

Daniel Craig is contracted to one more film in the series, however it feels like Spectre would be a satisfying conclusion to his reign as Bond. There are some loose threads at the end of Spectre that can be tied up as the franchise goes forward; James Bond is very much here to stay.

Why Guardians of the Galaxy has to succeed