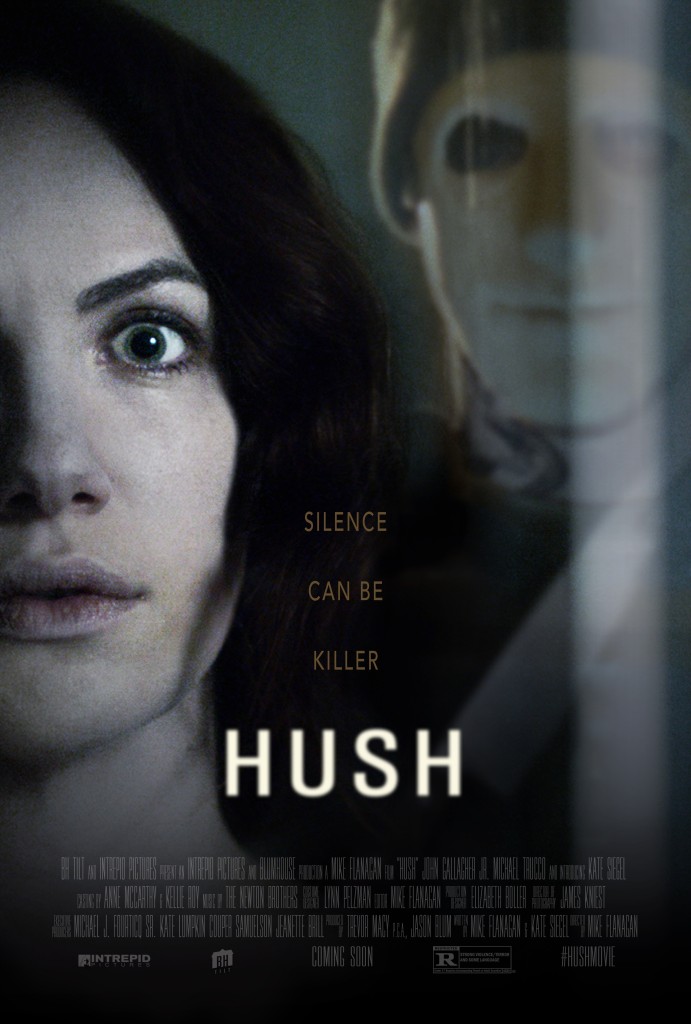 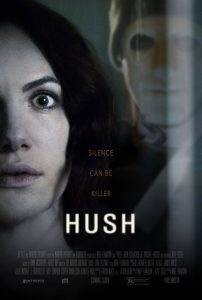 The new horror film, Hush, having had a short festival run this past March, is going straight to streaming on Netflix. The release platform, while understandable, is a bit of shame, as the film is quite good and deserves to be seen in a dark theater on the big screen.

The movie wastes no time setting up the main conflict: A profoundly deaf and mute woman, Maddie Young (Kate Siegel), is stalked by a masked killer who traps her in her isolated home in the woods of Alabama. It’s a standard cat-and-mouse scenario elevated by its committed acting, some superior sound design, and the crisp direction of Mike Flanagan.

Flanagan’s previous feature, 2013’s Oculus, showed his knack for creating an atmosphere of dread, and that talent continues in Hush, co-written with his wife, Siegel. Hush equally favors dread and fear over gore as it shows Maddie’s struggle to survive a killer she can’t hear coming.

The film begins with Maddie in the kitchen, making a meal from a recipe on her laptop. As she chops and cooks, each sound is magnified until the noises begin fading into a muffled miasma that resolves into what sounds like the dull roar of wind to signify Maddie’s deafness. The sound puts the audience directly into Maddie’s head, quickly engendering sympathy for her which will only grow throughout her ordeal.

Maddie, a well-known author, has retreated to her remote locale to work on her next book, but she’s also fleeing from a broken relationship and possibly her own problems dealing with being rendered deaf and mute at a young age due to meningitis. She’s befriended by a neighbor, Sarah (Samantha Sloyan), who admires Maddie’s work and is learning sign language to communicate better with her. She also has remote support from her sister, Max (Emma Graves), whom she communicates with via FaceTime.

It’s right after a session with Max that Maddie starts receiving photos of herself inside her house from her own phone. Confusion turns to horror as she realizes someone is watching her. Though she manages to lock the masked stranger (John Gallagher Jr., who’s also in 10 Cloverfield Lane) outside, he soon cripples her ability to call for help and escape by shutting off the electricity to the house and slashing the tires of her car.

The Man (as the character is credited) has one goal: Kill Maddie. He knows she’s deaf but can read lips, so he communicates exactly what he’s going to do her. Even if she could scream for help, no one would hear because of how deep in the woods she lives.

One of the things I liked best about the film is how resourceful Maddie is. The Man announces his intentions to torment her, and she immediately begins scrambling, gathering potential weapons and trying to figure out how to escape. As The Man prowls around outside, Maddie has to draw on every ounce of instinct and strength she can muster as she tries to outwit him and survive.

Another thing to recommend the film is how smart the main characters are. Maddie, as an author, is used to thinking in terms of arcs, with beginnings, middles, and ends. Her frustration with being unable to think of a good ending for her latest book dovetails into her thinking of how to get out of her current predicament alive. The Man is cunning, using his knowledge of Maddie’s deafness (which he figures out in a particularly harrowing scene) to torment her further. Even John (Michael Trucco), Sarah’s boyfriend, is not easily fooled the way his type of character in a different horror film would be.

Hush also upends a few classic horror film tropes, such as with Maddie’s pet cat, while mining every ounce of tension it can from them in clever ways.

Credit goes to the actors, especially Siegel and Gallagher Jr., for imbuing their characters with likeability (or in The Man’s case, revulsion) and making you care about their fates. Siegel has to convey a lot of different emotions with just her expressions and body language, and she’s more than a match for the task. Gallagher Jr., an accomplished stage actor with a Tony Award under his belt, exudes menace as The Man, the complete opposite of his character in 10 Cloverfield Lane. He’s so different here that I didn’t even recognize him at first (and I’d seen him in “The Newsroom” and several of his other TV roles besides recently on the big screen!).

The script is also a highlight, and along with Flanagan’s sure direction and pacing, the story never lags. I was invested in Maddie’s fate from the start.

The biggest highlight, though, is the use of sound (whether it’s magnified or stripped to nothing), not only to put the audience on the same level as Maddie, but to heighten the tension, especially when we can’t hear what’s happening while we’re watching it unfold. It, along with the isolation of the woods and the copious un-curtained windows in Maddie’s house, makes Hush a nerve-shattering rush.

Flanagan has a real knack for creating a creepy time at the movies, and Hush is hopefully only one film in what could be a long string of quality horror should he choose to stay in the genre. Definitely check this film out on your streaming device of choice today.

Hush, (from Blumhouse Productions and Intrepid Pictures), is available for streaming on Netflix beginning April 8, 2016.