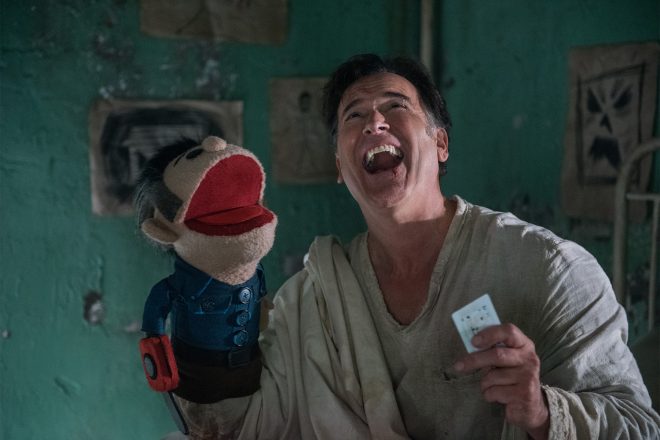 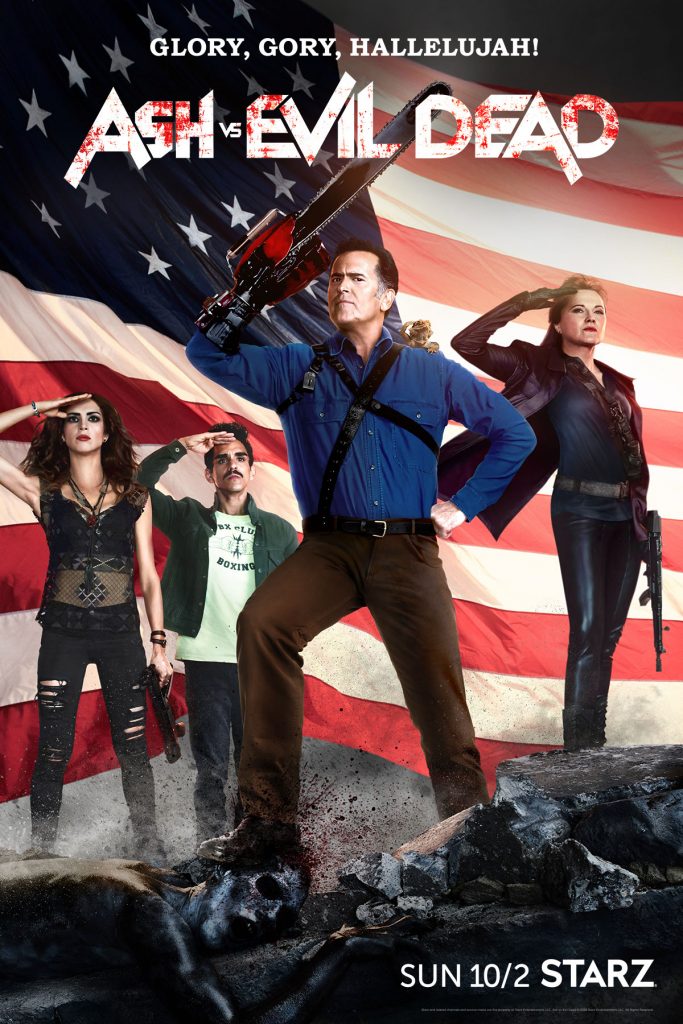 Previously on Ash Vs. Evil Dead: Ash (Bruce Campbell) and the Ghostbeaters went back to Casa Ashy Slashy to deal with Pablo’s (Ray Santiago) “spiritual convergence” with the Necronomicon. While Ruby (Lucy Lawless), with a scared Lacey (Pepi Sonuga) in tow, attempts to accelerate the process so the spell to destroy Baal (Joel Tobeck) will appear before the Book takes over Pablo completely, Kelly (Dana DeLorenzo) and Linda (Michelle Hurd) do their best to keep the angry mob led by Baal and Sheriff Emery (Stephan Lovatt) at bay. Meanwhile, Cheryl (Ellen Sandweiss), Ash’s long-dead sister, reappears in human and Deadite form to torment Ash. Cheryl kills Chet (Ted Raimi), who’d been in her room doing…something. A grim and determined Ash kills Cheryl again, this time in front of the angry mob, who finally sees proof that Ash was telling the truth all along. Emery takes advantage of the situation to capture Ash for Baal, who knocks out Ash with Ash’s own boomstick.

As the song at the end of last week’s episode hinted, “Delusion” sees Ash institutionalized in a run-down facility, with Baal, taking the form of psychiatrist Dr. Peacock, urging Ash to destroy the Necronomicon and accept that he is, indeed, Ashy Slashy, the Boomstick Butcher with the Chainsaw Hand, murderer of his friends, sister, and countless others, and delusional whackjob who sees demons everywhere. It fits Baal’s modus operandi completely, as previously related by Ruby: prey on a person’s mental health by instilling paranoia and fear. But will it work on Ash?

The episode features Campbell’s finest performance of the series; he plays most scenes in an understated manner, injecting true heartbreak and pathos; even Ash’s normal bravado is toned way down. Campbell gets us to believe Ash may actually accept Baal’s repeated offers to be Baal’s right-hand man, and it’s marvelous to watch.

Mark Beesley returns to direct and keeps everything relatively low-key, letting Campbell’s performance shine. Though Ruby, Kelly, Pablo, Chet, and Linda all appear at various points (with DeLorenzo again standing out as Kelly is revealed to be batshit insane), this is really Campbell’s showcase, and Beesley, working from a fine script by Hank Chilton, keeps us focused on it.

“Delusion” begins in Ash’s subconscious; he’s having a nightmare featuring images from the first two Evil Dead films. Ash awakens to find he’s in a dumpy asylum and he’s wearing dirty clothes. Ash hears whispers coming from a drawing of the Necronomicon he presumably created. A doctor approaches him, introducing himself as Ash’s psychiatrist, Dr. Peacock. Even with glasses and slicked back short grey locks, it’s not hard for Ash to see it’s Baal.

Peacock/Baal says Ash had a psychotic break, and that he’s been institutionalized the past 30 years since the events at the cabin. Ash, in disbelief, points to his stump, only to find what looks like a fully bandaged hand, which Peacock/Baal explains was done to keep Ash from hurting himself. Ash doesn’t buy any of this and tries to strangle Peacock/Baal after he says Ash has to get rid of the Book. Once again, Ash messes up Baal’s name, referring to him as Bill. Peacock/Baal injects Ash with a powerful sedative.

The sedative causes Ash to have nightmares about Pablo’s convergence. A nurse shows up to give Ash an IV; it’s Ruby, who Ash calls out to for help, but she walks away. Peacock/Baal mentions Pablo and Kelly, and Ash says Baal better not hurt them.

Peacock/Baal gives Ash a puppet named Ashy Slashy (voice of Jeremy Dillon) to help accept that he’s crazy. Puppet Ash tells real Ash he will help him get rid of his delusions; the two have a hilarious little fight. The bed shakes around and Ash sees Peacock revealed as Baal. The puppet tells Ash to give in. “Get your filthy puppet butthole off of my arm!” Ash cries as he flings the puppet into the wall, falls off the bed, and crawls away in an attempt to escape.

Ash winds up in the dilapidated hallway, staggering to his feet. He sticks his arm in a hole in one of the walls, and immediately cries out in pain, as if his hand is being bitten, but when he pulls it out, everything is fine. The hall tilts, causing Ash to lurch about (and giving Campbell an opportunity to bust out his physical chops, which are still very good). Ash winds up in Kelly’s room and she’s a smelly mess. She calls him a murderer and says he’s been in the facility “forever.” In fact, she keeps count of the time by breaking her own fingers. An orderly looking very much like Pablo shows up to bring Ash back to his own room. The woman Ash thought was Kelly is revealed to be someone else.

Baal performs electroconvulsive therapy (ECT) on Ash. “Woo! That’s like doing whippets! Can we do it again, doc?” Ash says in defiance. He refuses to break. Baal tells him Ash will be his henchman and continues to jack up the juice. Chet appears next to Ash; they’re both getting ECT, and Ash begs Chet to hang in there. Unfortunately, the next dosage is high and smoke starts billowing. Ash survives, but Chet is burned to death (making him the second character to die twice because of Ash).

We next see Ash in a wheelchair, watching TV in the main room while time accelerates behind him. He spots Ruby and wheels over to her to ask for help. He has burn marks on the sides of his head from the ECT, too. Ruby repudiates him, but Kelly is there, so he uses her manic energy to start a riot in the room. While Pablo and another orderly beat him, Ash rips off Pablo’s keycard, then passes out.

“Wakey wakey, hands off your snakey!” the puppet declares. Ash and the puppet laugh maniacally together after Ash talks the puppet into escaping with him. First stop—get Kelly. The puppet vulgarly hits on her even as Ash and Kelly tell it to shut up (and even as Ash admits earlier that the puppet is only making the kinds of jokes Ash would make). They can’t escape, though, because the card doesn’t work and lights and sirens go off. Kelly murders Pablo in an attempt to assist the escape, horrifying Ash. Kelly, in full-on crazy mode, attacks Ash, insisting her name is Amanda and Pablo’s is Reg (he even has a nametag with “Reg” on it). Suddenly, Kelly is on the floor, dead, her jaw ripped open, while Pablo has his face ripped off. Except it’s not Kelly and Pablo; it’s two other people, presumably the real Amanda and Reg.

Baal shows Ash, who’s in a straitjacket, a video of Ash murdering the patient and the orderly, and it’s brutal. Baal says he’s going to transfer Ash to another facility far away. Ash insists that’s not him in the video. Baal tells Ash he’s arranged for one last visitor to say farewell. It’s Linda, looking heartbroken and saying she’s been visiting Ash at the nuthouse for 30 years. He looks out the window and sees three people who look like Ruby, Kelly, and Pablo by the Delta. Ash apologizes to a teary-eyed Linda and says he has to go away for a long time. He accepts that he’s the killer in the video. Baal comes to take him away; Ash admits he killed everyone—in the cabin, at the institution, all of it. Baal says he has to listen to him now, and that Ash must destroy the Necronomicon. Ash agrees. Baal makes him repeat it, loudly, then lets him go. The drawing of the Necronomicon moves and reveals a stick figure Pablo sadly saying “Jefe?” And credits (scored perfectly as always as James and Bobby Purify’s “I’m Your Puppet” plays)!

As I said above, this episode is a showcase for Campbell, especially in the last scene with Linda; as melancholy music plays, Campbell shows us the despair Ash is feeling as he accepts that he’s a delusional killer. When he shouts back at Baal everything Baal wants to hear, Campbell sells that Ash is truly defeated. It’s a great dramatic performance. (I won’t say it’s his Emmy reel because the Emmys never look at shows like Ash Vs. Evil Dead, but…fuck it: Starz, submit this one stat!!) Everyone’s good in this episode, really, even the puppet.

I haven’t mentioned it before, but it seems this is the best place to say it: I don’t watch the previews for the next episode, so I don’t know what may happen next. When I say things like, “Is Ash really on Baal’s side, or is he faking it to escape and get back to his friends so they can destroy Baal?” I really don’t know. So: Is Ash really on Baal’s side, or is he faking?  I hope of course that it’s all part of Ash’s plan to save his friends from Baal, but that “Jefe?” from the Pablo picture sounded genuinely worried. And if Ash has been turned, will the Ghostbeaters & Co. be able to stop him from destroying the Necronomicon (especially considering it’s merging itself with Pablo)? Stay tuned!

Not as many quips this week because the episode was so serious, but Ash got a few good ones in (as did the puppet):

“Well, boy, the joke’s on you there doc because I don’t have a shrink. I don’t even have health care. In fact, I do my own surgery.”

“The only person who scrambles my brain, pal, is me by doing the fun stuff like drinking glue and sniffing booze!”

“Well, you can suck my saggy bills, Baal!”  Ash really has trouble with Baals and Bills…

“A puppet? I hate puppets. Even stunningly handsome ones.”

“What the Fraggle Rock is that thing?” – Kelly