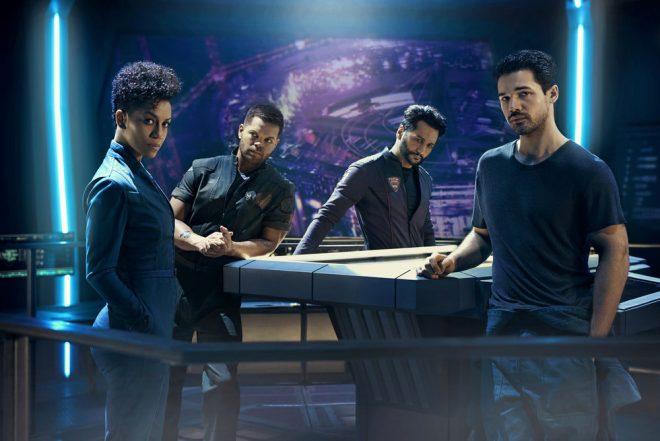 I’m so glad that I finally decided to give this show a chance last year! Live tweeting the premiere with other fans and several cast members was so much fun! I appreciated that the 2-episode premiere, titled “Safe” and “Doors and Corners” had limited commercials as it helped with staying engaged while live tweeting.   The two episodes merged seamlessly into each other that it was hard for me to tell when one ended and the other began.  Solid Premiere! Here are what I felt were the top 6 stand out moments between the two episodes. This was difficult as there were several moments but I had to narrow it down.

#6 Amos (Wes Chatham) vs. Joe Miller (Thomas Jane): It wasn’t even a contest.  Miller was still recovering from radiation poisoning but he had to confront Amos about him killing his friend Inspector Sematimba (Kevin Hanchard).  I get that the inspector pulled a gun on Naomi (Dominique Tipper) but was killing him right then the answer?  We will never know.  Amos didn’t have to be so rough on Miller either.  He had to know that he would at least need to get a few hits in.  If Naomi had not come in when she did, Amos may have added to his body count.  At least Hanchard’s character is still alive in Orphan Black geez.

#5 Chrisjen Avasarala’s (Shohreh Aghdashloo) drink with Admiral Souther (Martin Roach):  I think Admiral Souther needed to get his feelings out regarding both her and Sadavir Errinwright (Shawn Doyle).  I agree with him in a sense.  From what I have observed so far, Chrisjen’s motivations appear more genuine for Earth’s interests than Errinwright’s.  I am glad that from this we know that she was not involved with setting up Fred Johnson (Chad Coleman) to take the fall for Anderson’s station because I would’ve been disappointed if she was. Her meeting should be interesting with Johnson if Coytar (Nick Taraby) makes it happen. The fact that Johnson killed the OPA guy that attempted her assassination should be a conversation starter.

#4 Teambuilding by Lasagna:  Between them barely making it out of the Eros Station and them finding the container of the protomolecules, I’m glad that Alex Kamal (Cas Anvar) took it upon himself to bring the main crew together to bond. The story with the cheese thieves was funny! The irony of me not being a huge cheese fan made me want to gag and laugh at the same time.  By having Miller (Thomas Jane) join them was even better, because he’s a part of their journey now. This was later emphasized when Jim Holden (Steven Strait) wanted Miller to leave his belongings on the ship because he wanted him to come back after the mission and the relief everyone felt that he wasn’t in the first pod that got blown up during the space battle.

#3 Miller shooting Dresden: This was a great way to end the episode.  Dresden was just crazy! He had no remorse on killing 100,000 Belters all in the name of science.  His belief that the protomolecule was an act of war from alien life forms may be true, but it was hard to say if his claim of being the only one that can access the data was a bluff to save his own hide.  The OPA and Miller managed to leave one of the other scientists alive before they found Dresden so they may be able to get the information they need from him.  I thought that maybe Miller would keep him alive for a little bit longer but his thirst for revenge outweighed that. We will never know if Dresden would have confessed who was backing his research or not. Maybe Miller already has his suspicions.   Holden’s and Johnson’s expression were priceless!  This will be a great pick up point in the next episode that is for sure!

#2 The Space Battle:  Alex was failing miserably during the simulations.  However, when it became game time he kept his cool and managed to defeat the stealth ship that guarded the station.  Amos did help with that when he fixed the part they needed to function. Unfortunately, one of the breaching pods of OPA fighters got destroyed before Alex could shoot the main station gun down.  Something tells me that he will add that mistake onto the guilt he already feels about what happened at Eros because one of the belters they managed to save was in the pod that was destroyed.  Miller is a darn sight lucky he was in that second pod.  Also, what a nice subtle way of saying that the company Fed Ex makes it in the future with space deliveries. The Expanse VFX team should be proud for how this scene turned out.  Look forward to seeing more this season!

#1 Mar’s First Lieutenant Roberta “Bobbie” Draper: “Who are we? MMC!”   From her first scene to her last, this character made a great first impression. Thanks to Frankie Adams, Bobbie may become my favorite new character.  It was hard to decide which moment for me stood out the most but I had to choose one. When she rallies the troops, the way that she commanded the scene made me want to cheer alongside them.  She proved her toughness when she arm wrestled that robot! She already has the respect of her team and the leader Lt Sutton (Hugh Dillon).  She wants Mars to be free from Earth’s control and see her planet terraformed.  From her conversation with Sutton, it should have happened long ago but Earth felt threatened so to avoid war Mars delayed it.  When she destroyed Phoebe Station, she unfortunately played right into Errinwright’s hands because now Mars may never know what happened at Phoebe Station unless she somehow meets up with the crew of the Rocinante.  I’m hoping that’s soon because I need to see her interact with Naomi, Amos, Holden, Alex and even Miller, maybe even Chrisjen. 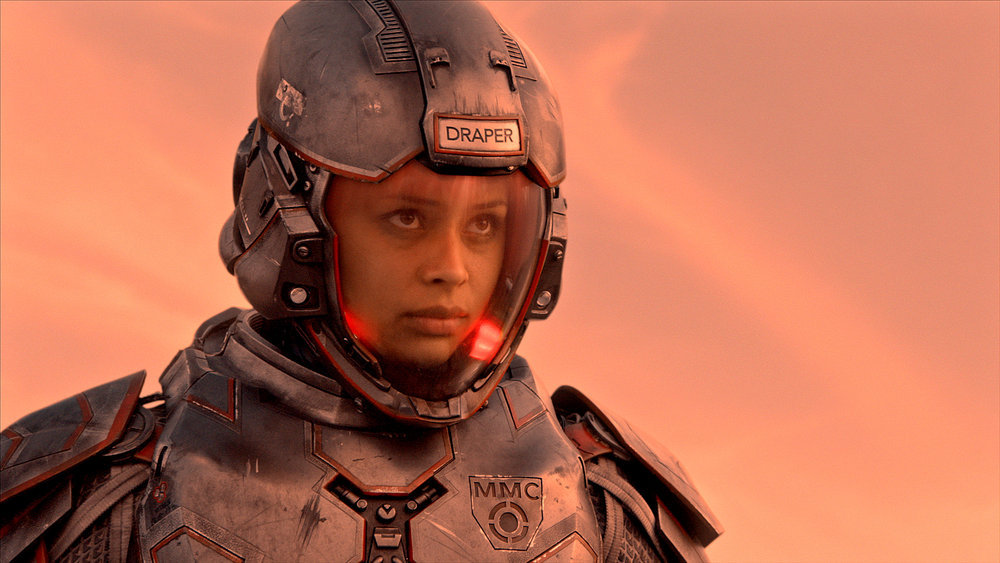 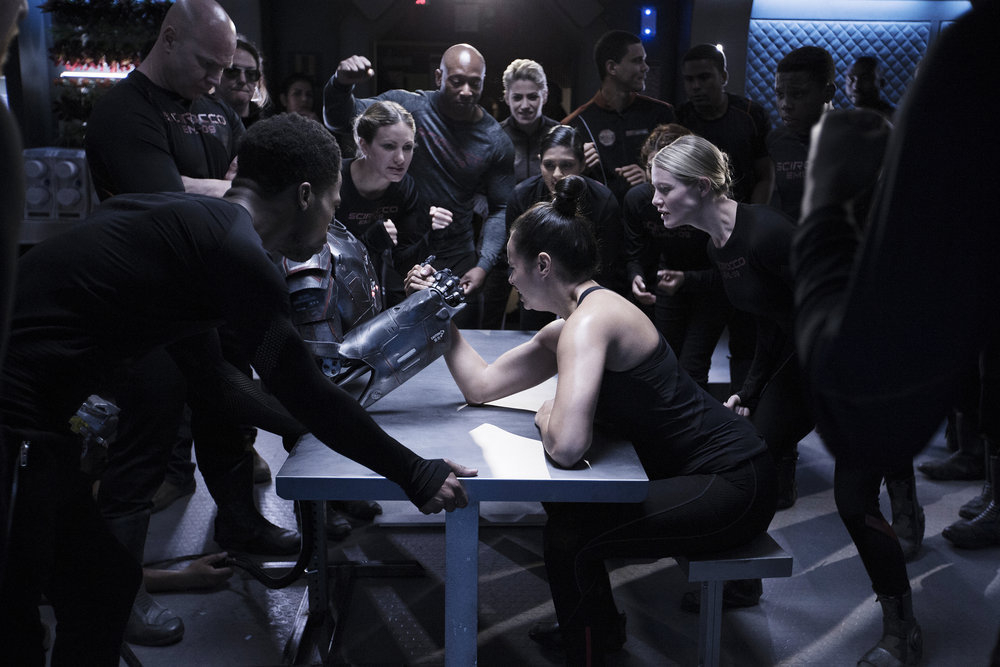 I have loved Chrisjen’s outfits and hair since she was introduced last season.  Wardrobe is continuing to slay when it comes to this characters clothes.  It helps that Aghdashloo looks gorgeous in them!  I’m rooting for her to take down Errinwright and Mao, because their actions are causing more problems than not.

Hello Nick Taraby as Coytar! I loved him on Spartacus and The Flash so it is nice to see him on another show! I’m hoping to meet him at a convention one of these days. It’s also nice to see Mpho Koaho as Private Travis while I’m waiting for BBC America’s Dirk Gently to come back!  Check out my interview with him on the SciFantasy Podcast!

I’m looking forward to next week’s episode! What are your predictions for the season? What you’re your favorite moments?  Sound off on your thoughts below in the comments!