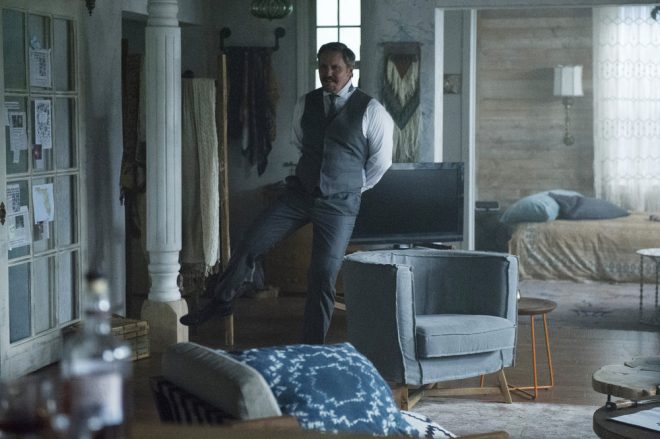 If the Beast sucks Fillory dry, the magic will disappear on Earth and in Fillory.  At least that is one of the things we find out on this week’s episode written by John McNamara.

Penny (Arjun Gupta), Quentin (Jason Ralph), Alice (Olivia Taylor Dudley), and Margo (Summer Bishil) make it to the Netherlands so they can reach Earth.  Unlike last time, the robed assassins leave them alone to dip in the Earth Fountain.  They meet up with Dean Fogg (Rick Worthy), who is pleased that they are still alive.  Quentin asks about the workbook, which was written by a student from Brakebills in 1893. This suggests that Brakebill students have been coming to Fillory and ruling for years. Fogg doesn’t deny it.  The professor that wrote the battle magic spells, Bigby (Amanda Brooks), was fired for not agreeing that battle magic be banned from Brakebills.  Alice asks about a specific spell called the Rhinemann Ultra.  Fogg will get back to them. 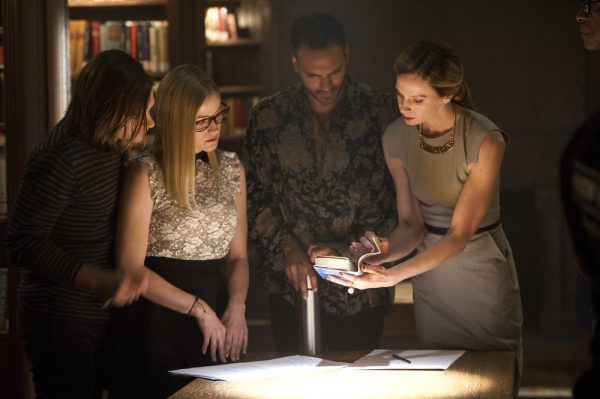 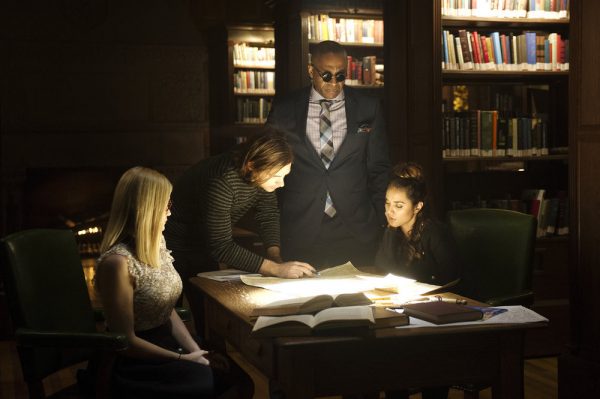 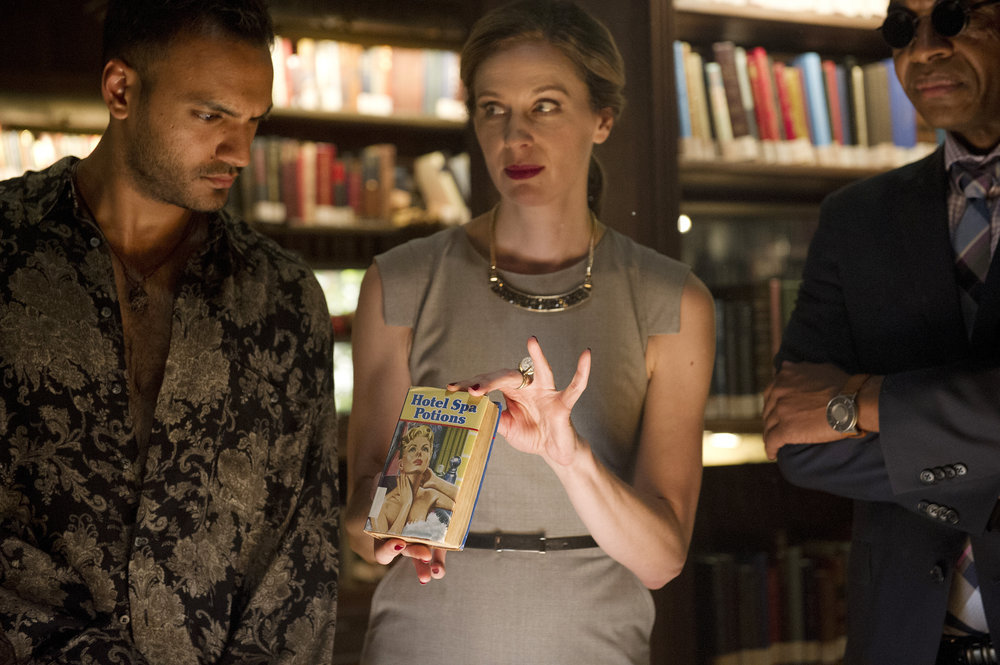 He recruits Professor Pearl Sunderland (Anne Dudek) because she knows the library very well. Professor Bigby is a 500 year old pixie that likes puzzles and riddles. Fogg knows that she would hide the spells in the least likely book in the library.  Fogg brings everyone to the library and has them break up into teams to try to figure out the potential title of the book they would need to look for. Quentin’s and Alice’s anagram phrases of Last Hope Options yielded a random book called Hotel Spa Potions.  That was the book they were looking for but a chapter was torn out!  Bigby left another riddle which was her address.  Margo figured out the state at least was Rhode Island.

Alice, Dean Fogg, and Quentin go to Bigby’s house to convince her to let them have the chapter. Bigby greets Dean Fogg with a kiss.  Should’ve known the Dean was “familiar” with Bigby in that sense!  Alice manages to convince Bigby to give her the spells since she still has some God juice left in her.  Feeling pressured, Alice wants to be confident she will master the Rhinemann Ultra spell before it’s too late.  The plan is now to move up when they must confront the beast.

On the Penny front

His hands are still out of whack.  When they make it back to the Physical Kids House he couldn’t even punch Josh (Trevor Einhorn) like he wanted to but did knee him in the nuts!  Margo provides a temporary fix but later that no longer works.  Professor Sutherland decides to help him out by tying his wrists together behind his back and massaging some ointment into his hands.  Penny tries to take advantage by coming onto Sutherland, but she resists saying she will consider it after he graduates. That scene was hot though!  I still want him back with Kady (Jade Tailor), who needs to come back pronto!

Julia and the Beast 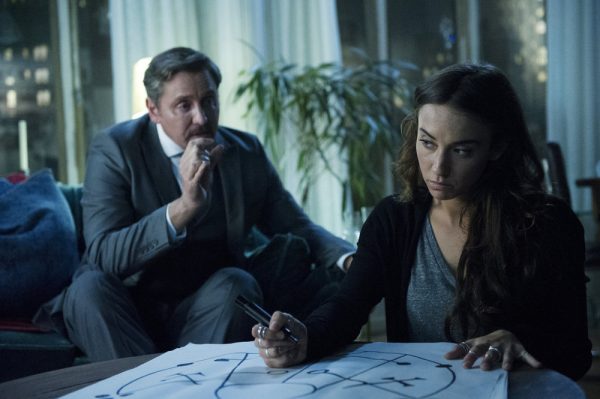 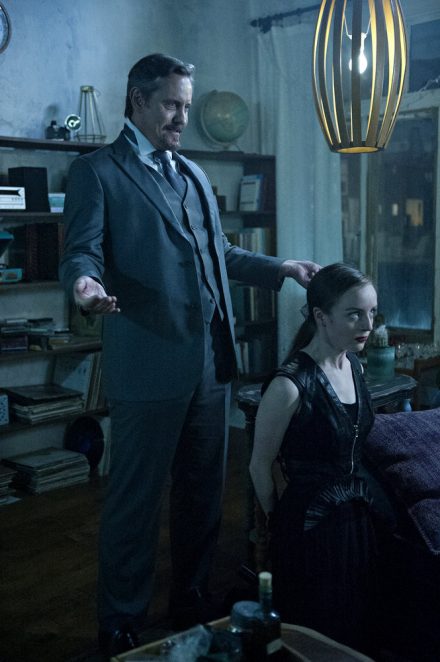 The Beast aka Martin Chatwin (Charles Mesure) serenades Julia (Stella Maeve) as she is trying to create a sign to tempt Reynard the Fox. Martin, because he could no longer rule Fillory, set it up so future kings and queens didn’t rule long.  Martin wants to use another powerful hedge witch as bait but Julia’s against the idea.  When Martin kidnaps Marina (Kacey Rohl), Julia’s apologetic but warns her that the God is on a killing spree of powerful hedge witches. Marina doesn’t want to be used so she leaves.  She does call the West Coast Hedge Witch to form a pow wow so they can figure out how to take care of Reynard themselves.  However, when Marina meets with the witch, she finds her dead with her guts ripped open.  In a rare show of vulnerability, she goes to Dean Fogg for asylum but he refuses, even after explaining her situation.  As a last resort, she goes back to Julia so they can work together.

The Beast on Broadway! Coming to a nightmare near you.

Posted by The Magicians on Thursday, February 2, 2017

Quentin meets up with Julia and they catch each other up on what’s happening. Julia wants them to wait until she kills the Fox before going after The Beast but Quentin feels like their time is running out so he is giving her a heads up.  This means she needs to move her timetable up. Julia does warn him that The Beast put a spell on the throne.  They argue about whose issue is more important, killing a God or a Beast?  At an impasse the friends leave on sour note.

High King Eliot (Hale Appleman) finally gets to the throne room and finds dead bodies.  His wife Fen (Brittany Curran) ruins what little buzz he has by mentioning the people are starving, citing magic as part of the problem. He shudders remembering the fact that he grew up on a farm and will have to introduce the concept to Fillory.  Fen offers to make it up to him but when he suggests watching others have sex, she’s uncomfortable with it.  Eliot tries to be a good sport about trying to have sex with Fen.  By creating fertilizer for farmers to use, they are on the right track with fixing the crops.

Alice, Margo, Penny, and Quentin make it back to Fillory but not before they get a tattoo with a cacodemon hiding in there.  Per Dean Fogg, they will have a special word to bring them forth.  The demons can only be used once.

And there you have it the 2nd episode!

This was a solid second episode with several good moments, but while I like several changes that were made, I have some concerns with what was changed from the books. *Warning: Some small spoilers ahead*

I love that Charles Mesure can sing! I was not annoyed as Julia and Marina but I don’t blame them considering who he is after all.  Mesure brings a suave charm to The Beast which makes me like him even though I’m supposed to hate him.  So far he is a way better Beast than the character in the books.  The chemistry between Mesure, Maeve, and Rohl made their scenes even better to me.

It just occurred to me that there is a possibility that Marina could be Plum, a character that is introduced in the third book because of the fact that she was kicked out of Brakebills.  She also reminds me of the character Asmodeus in the books, even though Kady fills that role too.  I love me some Dean Fogg, but I thought that was a dick move that he didn’t even consider having Marina stay at the school because of the danger she was in.  The fact that there is a God running around killing witches, even if they are hedge, could eventually bleed into anyone affiliated with magic.  Reynard is a big enough problem that at least warrants some assistance.  I would love it if Bigby gave a hand with that!  I vaguely remember Professor Bigby but Brooks made her quirky and fun in this episode which I enjoyed.

One thing that has bothered me is the fact that Quentin and crew have not graduated yet from Brakebills before their final confrontation with the Beast instead of graduated like in the books.  That to me is partially what made Alice badass.  She didn’t need a male God’s semen to help her in her fight against Martin.  It was what she learned at Brakebills and afterwards that made her powerful.  I also feel like it was more organic how it was done in the books where it was more of group effort.  However, Quentin being less of a jerk helps in this situation because the way he treated Alice about the fact that she slept with Penny was worse in the books.

Right now the Beast is helping Julia find Reynard the Fox.  Since Quentin and Alice were already talking with Bigby, a very old pixie that has seen some things, why couldn’t they find another alternative for juicing up Alice?  Was having sex with a God or drinking his semen the ONLY option?

I’m so glad they introduced the cacodemons!  It was done slightly different from the books but their purpose is still the same.  This makes me wonder though what they will look like once they pop out of their backs.  Quentin’s cacodemon was…different than what you would expect in the books.

Fen is still not winning me over.  Yes the crop situation needed to be handled, but unfortunately this forced marriage between her and Eliot needs to change.  He doesn’t get a chance to be who he really is.  Their lack of a sex life and him needing to watch other people is a sign.  I do love that Eliot respects Fen enough to have a voice on how he needs to rule.  Besides, he needs the help from a local’s perspective and take care of domestic things while the rest of the rulers prepare for war with The Beast.

Next week should certainly prove interesting and I really hope that this battle will not disappoint!   What were your thoughts of this episode?  Sound of below in the comments!